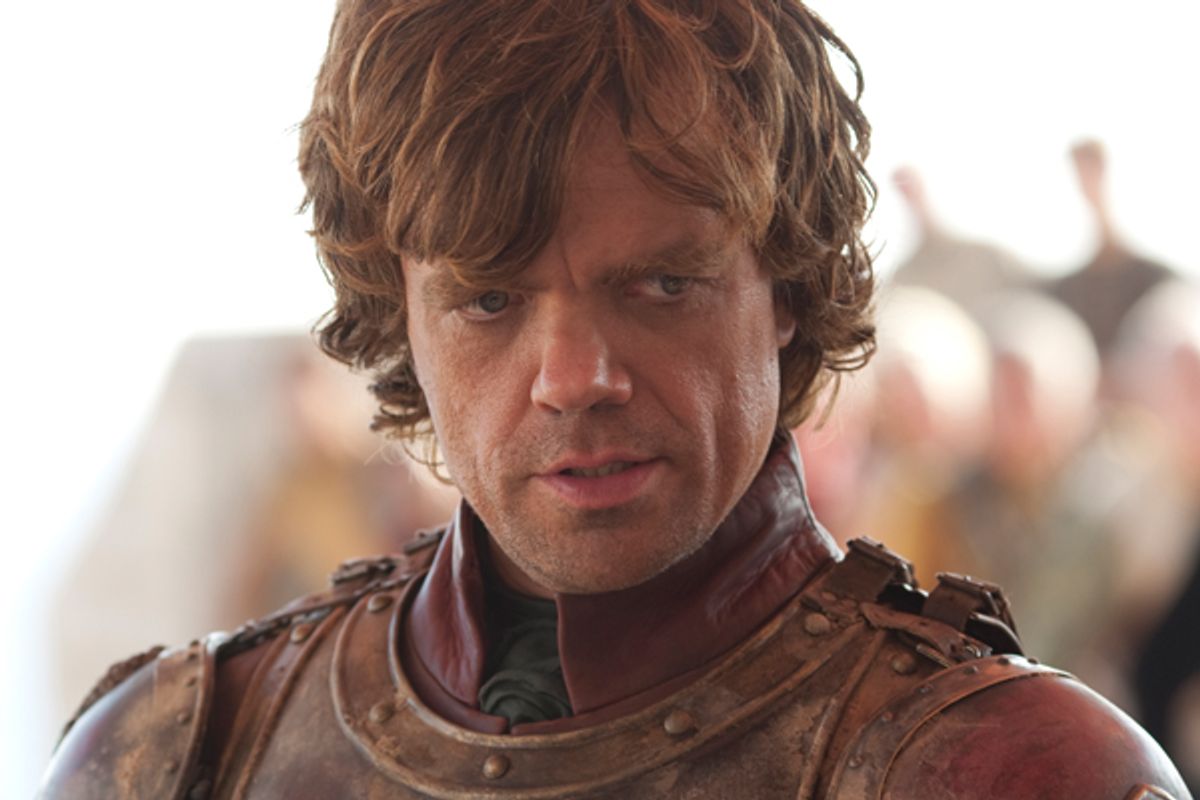 Peter Dinklage in "Game of Thrones"
--

Season 2 of HBO’s expansive, addictive, realpolitik-at-sword-point series “Game of Thrones,” based faithfully but not slavishly on George R.R. Martin’s beloved, still unfolding “A Song of Ice and Fire,” picks up right where Season 1 left off: within 40 seconds there is blood on the floor. Or the cobblestones, if you want to be precise.

Blood is the motif of choice in “Thrones,” which premieres Sunday night at 9 p.m. Dying men gurgle and burble it, knives spill and spatter it and, above all, cameras linger on it. It’s a “strange thing, the first time you cut a man,” the incestuous, dashing "kingslayer" Jaime Lannister (Nikolaj Coster-Waldau) said in the first season's second episode, “You realize we are nothing but sacks of meat, blood and some bone to keep it all standing.” The near constant bleeding and disemboweling, flaying and chopping is meant to remind you of this fact. Man — be he a wit or bore, a heel or a hero, a Ned Stark or Viserys Targaryen — is only flesh, just one slash from having his body turned to trash, his head into decoration. Don’t get too attached.

Man’s tendency to become offal, and his society’s propensity to become an offal-making factory, speeds up in “Thrones'” second season, which as those 40 seconds suggest, hits the ground bleeding. The first season set the stage for a sprawling dynastic struggle (if you're starting to watch with Season 2, don't; you’ll immediately be confusing your Baratheons and your Greyjoys), and in this second one, that struggle continues to crest. Instead of one fat, lazy king, there is now a sadistic, evil, smushy-faced, teenage monster on the throne; three active claimants to it, all tricked out with armies; a queen across the ocean, tricked out with baby dragons; a rising of frozen zombies in the North; and more wannabe kings in almost all the corners of Westeros. The slaughter and disorder will get worse and worse and, then, still worse. Martin, after all, has yet to write the book in which it begins to get better.

Last season, the Starks, and particularly the now-headless Ned (Sean Bean), were the series’ focal point. Now the Stark children are scattered, and so is the story.  Peter Dinklage, a scene-stealing actor playing the scene-stealing Tyrion, takes over as the central character, a trade up in entertainment value, and a trade-off in morality. With this replacement, the show is suggestively, even helpfully nudging viewers away from an attachment to “good guys.” Ned was noble and honorable and those qualities got him killed. Tyrion is more cynical, more manipulative and much better suited to surviving. He’s not so keen to be made into meat, and that makes him the kind of man characters in the show and audience members alike should be investing in.

Of the dozen or so new characters who have joined a cast that already included women who eat horse hearts, kidnap Lannisters and insist on being taught to use a sword, are a fearsome foursome of swaggering females. (Not since “Battlestar Galactica” have so many women unabashedly, successfully wielded weapons.) New to the scene are the warrior Brienne of Tarth (Gwendoline Christie), looking like Tilda Swinton on steroids; the sloe-eyed, cagey Margaery Tyrell (Natalie Dormer); Asha Greyjoy (Gemma Whelan), willing to employ incest to prove a point; and the mysterious, seductive cult figure Melisandre (Carice van Houten), who has some of the creepy sexuality of a provocative high school teacher. Even Sansa Stark (the excellent Sophie Turner), Ned's prissy teenage daughter, the woman in “Games” who seemed least suited to a life of warfare, has toughened up. Though her face is tear-stricken at all times, she’s starting to seem dangerous, verging on homicidal, suicidal or both. (A piece of mashup fan fiction I would love to see: the "Bell Jar” by way of “Game of Thrones” that is surely Sansa’s diary.)

Whenever I think about all of the ways “Games” could have gone wrong I am surprised all over again that it hasn't. Add up the thousand upon thousand of pages of source material, a cast of scores, dozens of story lines, swords, zombies, dragons, incest, fealty and it’s so easy to imagine an ungainly, incomprehensible, ridiculous, bloody television trip to the Renaissance Faire. But “Games” is a genuinely mind-boggling piece of adaptation, cast more or less perfectly (except for Kit Harington’s Jon Snow, who relies too much on the soap opera actors handbook of serious faces), with expert control of the story lines, gorgeous and diverse settings, and such seriousness of purpose and consistent internal logic that I find the least realistic thing about it to be that the men of Knights Watch don’t wear hats. (If, as a character so eloquently put it, a man's prick is liable to freeze on the other side of the wall when he takes it out to piss, what about his ears? )

The cornerstone of “Games'” success is its fidelity to Martin’s big genre advancement: to write magical fantasy like a realist. “Games" is a fantasy only insofar as it’s not taking place somewhere real. Nothing that happens there is a dream. It contains all the necessary, hugely entertaining genre staples — swords and armor, jousts and magic, kings and queens — but also the emotional and physical realism, the blood and guts, the twisted and tragic motivations that characterize TV's other best shows. It’s not just about what would happen if Tony Soprano were a king, but, you know, if Newt Gingrich were one too. The bloodletting has only just begun.