How to kill an abortion bill

Step one: Wait for a politician to say something stupid. Repeat 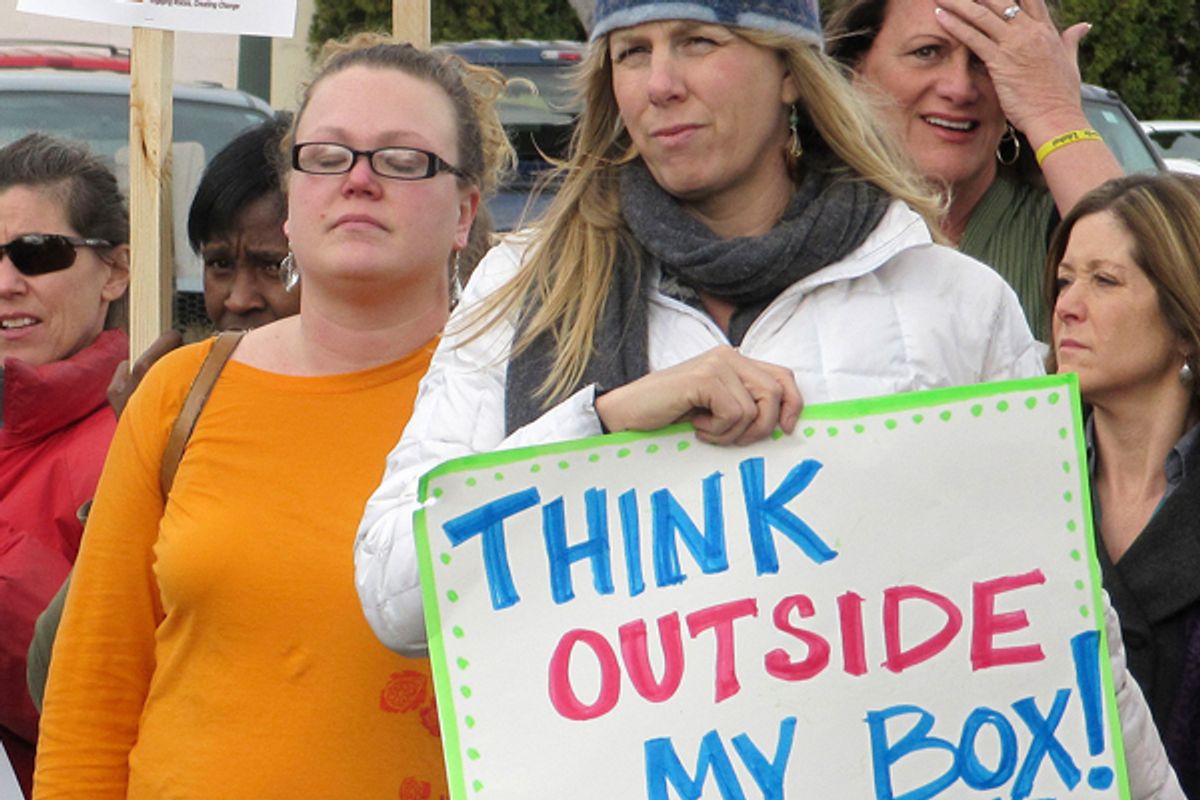 Jessica Luther was never much of an activist, until she started reading about antiabortion laws online last year. When the government nearly shut down over the funding of Planned Parenthood, Luther started posting satire on Tumblr from her home in Texas. But as she learned about states proposing, and often passing, restrictions on abortion access, the posts got more and more substantive. And through Twitter, Tumblr and Facebook, she found a lively community of red-state progressive women like herself, angry over legislators' attempts to strip their reproductive rights. Now she's a regular at pro-choice rallies -- in real life. "I no longer feel like I'm screaming in a soundproof room," says Luther, who recently started working as a social media consultant with the site RH Reality Check.

The awakening of women like Luther has been crucial to the efforts of state activists to beat back restrictive new abortion and contraception laws, most recently in Idaho. Politicians there were pushing a law that would require women seeking abortions to have mandatory ultrasounds when the bill's chief sponsor, state Sen. Chuck Winder, suggested last week that women use rape as an excuse for abortions. Soon, it was everywhere from Twitter to cable news to Doonesbury. Earlier this week, Republican legislators – faced with rallies, hundreds of Facebook messages, and national media attention -- turned and ran from a law that, just months before, might have passed quietly. One legislator called it “probably the most interesting caucus I’ve been in my 20 years here ... I was quite surprised by the concerns raised from across the board.”

“One of the things that happened in Idaho was that the legislators assumed people weren’t going to pay very much attention,” says Luther, who helped organize a social-media campaign against the bill. On the ground, Monica Hopkins, executive director of the ACLU in Idaho, agreed: “The public outcry is what killed this bill." She pointed out that a 20-week abortion ban passed relatively quietly last year. “I think really it’s a nationwide trend that Idaho is participating in.”

Activists in other states that have successfully beat back anti-reproductive rights laws have noticed a similar pattern: A legislator says something terrible and condescending; women use social media to stoke nationwide outrage about the comment; and the legislators, cowed by the unexpected attention, back down.

In Georgia, the Atlanta Journal-Constitution reported that hundreds of people attended hearings on the state's proposed ban on abortion after 20 weeks – a law based on scientifically spurious claims of “fetal pain” that six other states have passed since 2010. It failed partly because legislators couldn’t agree on an exception for “medically futile” pregnancies. In Pennsylvania, a forced-ultrasound bill “has been shelved indefinitely by House leaders, in part because of outcries by more moderate GOP lawmakers who don't want to deal with it in their election year,” according to the Harrisburg Patriot-News. (But not without Gov. Tom Corbett, who weighed in cluelessly in another widely circulated comment: "I don't know how you make anybody watch, OK? Because you just have to close your eyes.") In Tennessee, a legislator felt compelled to back off posting abortion records online, citing a fierce backlash and, he claimed, death threats.

These are defensive victories, to be sure, as bills limiting reproductive rights have still advanced to law in several states, including Virginia's forced-ultrasound bill. Texas Gov. Rick Perry saw no reason not to punish low-income women by rejecting federal funding for their healthcare because some of it would have gone to Planned Parenthood. Arizona's 20-week ban looks like it might pass, and just last week, Utah became the second state to impose a constitutionally suspect 72-hour waiting period for women seeking abortions. The ACLU’s Hopkins also warned against premature complacency. “It’s not over. We will celebrate this as a victory but the right-to-life folks have already said they’ll be back next session.”

But antiabortion legislators are actually on the defensive against angry constituents for a change, which means they have to explain themselves. And that means they're often getting themselves into trouble for being a little too honest about their misogyny, like the Alaska Republican state representative who said, "I thought that a man's signature was required in order for a woman to have an abortion," only then to see mockery of an "abortion permission slip" ricochet around the Internet. Or the Wisconsin senator who just said that all women who can't afford contraception need to do is Google it.

"Every time a politician says something terrible, people respond emotionally to that," says Luther. "It makes people in Florida care about what’s happening in Idaho." It was harder, she adds, to get people fired up about Utah’s mandatory waiting period, maybe because there was no single tweetable moment.

Some pro-choice organizations have talked about an "enthusiasm gap" among the younger generation, which doesn't remember back-alley abortions and which they say isn't fired up the way young anti-abortion activists are. But social media has made it possible for women and men to keep up with the laws that emerge seemingly by the minute -- and then sign a petition or, if they're up for it, flood legislators' Facebook pages with graphic updates about the vulvas the politicians are so interested in regulating. For progressives in conservative states, who often feel alone in their views, all this can be particularly galvanizing.

Before she became one of the most visible opponents of Mississippi's Personhood ballot initiative, putting her name on the lawsuit to take it off the ballot and starring in commercials urging residents to vote no, Cristen Hemmins hadn’t been involved much in politics. But since it was defeated in last November's election, she and her fellow newly minted activists are keeping close watch on the statehouse and keeping close touch on Facebook. “Ninety-five percent of us never really paid attention to the [state] house and Senate before this,” she said. “It’s definitely activated part of the population.” On their own initiative, they've been rallying in the capital and badgering their representatives to back down.

Hemmins has been surprised how few people it takes to get legislators’ attention, and recalled a conversation with her own representative about a proposed abortion ban that had no exception for rape or incest. “He thought that there was an exception but then he called me the next day and told me that he reversed his vote,” she said. “He even admitted that he hadn’t read the entire thing.”

It’s gotten to the point that Hemmins is trying to become a Democratic delegate to the convention and considering someday running for office. “I keep calling these white men,” she said. “There aren’t enough women and people of color in office, and I’m sick of white men being in control of everything.”