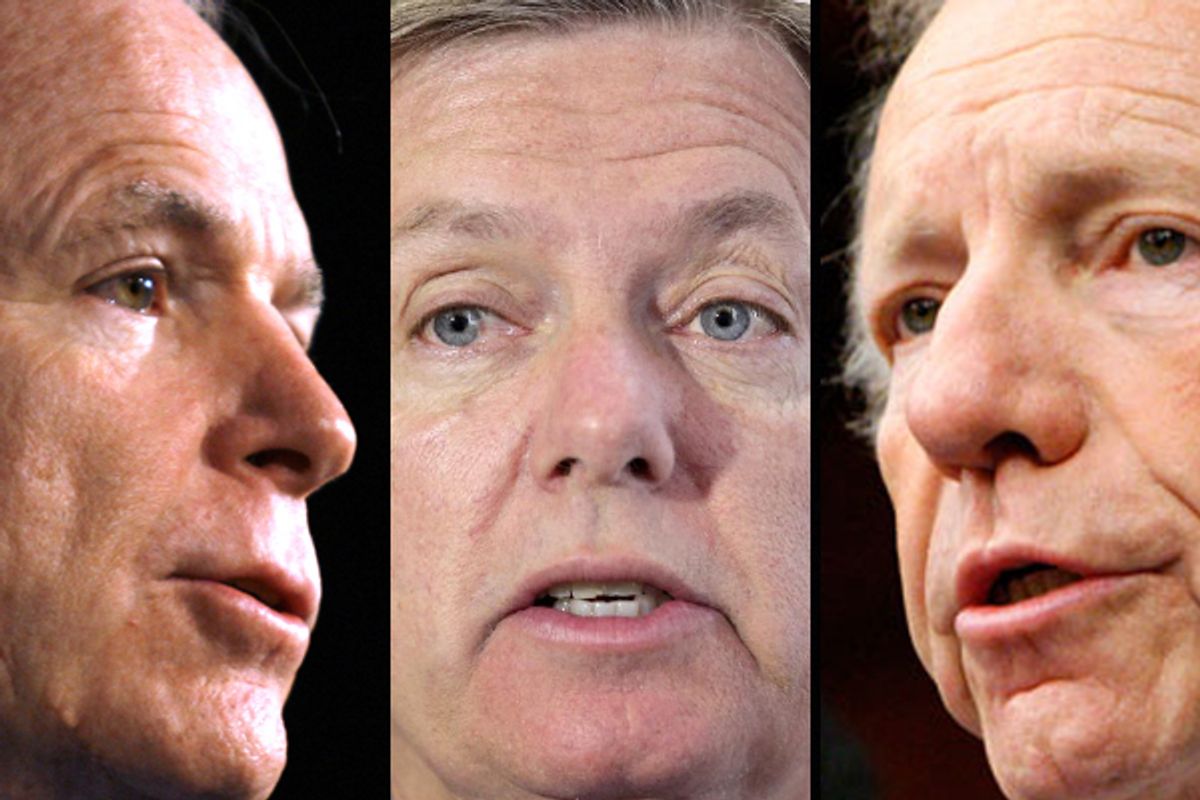 When John McCain, Lindsey Graham and Joe Lieberman join forces, you can be sure of one thing: It will involve state-sponsored violence. Today, they want us to arm Syrian rebels. Though, you know, what they really wanted to call for was actually bombing the hell out of Syria, until there is freedom. They're just taking it slow.

The Senate's three most predictable and least credible warmongering "moderates" frequently join forces to publish joint Op-Eds or hold press conferences and the one thing they always, invariably want is for the United States to have just a little bit more war than it currently has, somewhere far away. Sure, we could draw down in Iraq ... or we could listen to McCain, Lieberman and Graham and draw back up. We could draw down in Afghanistan ... or we could stay the course and keep sending troops there until we win! Americans may be tired of endless war with no coherent goal, but on the other hand, "only decisive force can prevail in [whatever country John McCain, Lindsey Graham, and Joe Lieberman are talking about now]."

As the Hill recently explained in a story on how John McCain, Lindsey Graham and Joe Lieberman were pushing for a resolution basically promising to make war with Iran, "Graham, Lieberman and McCain are considered some of the top foreign policy experts in the upper chamber," because they always, invariably support military intervention everywhere for any reason, and that is invariably considered a sign of "seriousness" in Washington. If you don't like waging wars everywhere, forever, you are a weird kooky hippie, and everyone laughs at you. If you believe that bombs and troops have the power to magically solve all problems, you are invited on all the Sunday shows every week to offer your sober analysis of the foreign situation.

You just never know which country these three will decide needs bombing next! One time the three amigos also took a trip to Tripoli to hang out with Moammar Gadhafi. (They invited Susan Collins along, though usually their sleepover parties are strictly "no girls allowed.") Sadly, by April of last year, they were no longer friends with Gadhafi, and the three had decided that the United States should assassinate him. (That is not really legal but, you know, "war on terror" and "serious, muscular foreign policy" or something.)

One time Lieberman and Graham tried to hang out with a different senator and they all came up with an idea that didn't involve bombing anyone but that made McCain mad and he yelled at them. Don't hang out with John Kerry and try to solve climate change! Hang out with me and let's try to convince everyone to bomb Russia or something!

Sadly, Joe Lieberman will be leaving the U.S. Senate soon, which means John McCain and Lindsey Graham will need to find a new fake-Democrat best friend to add a patina of "bipartisanship" to their endless demands for explosions and shooting and death.