Secrets of the MPAA 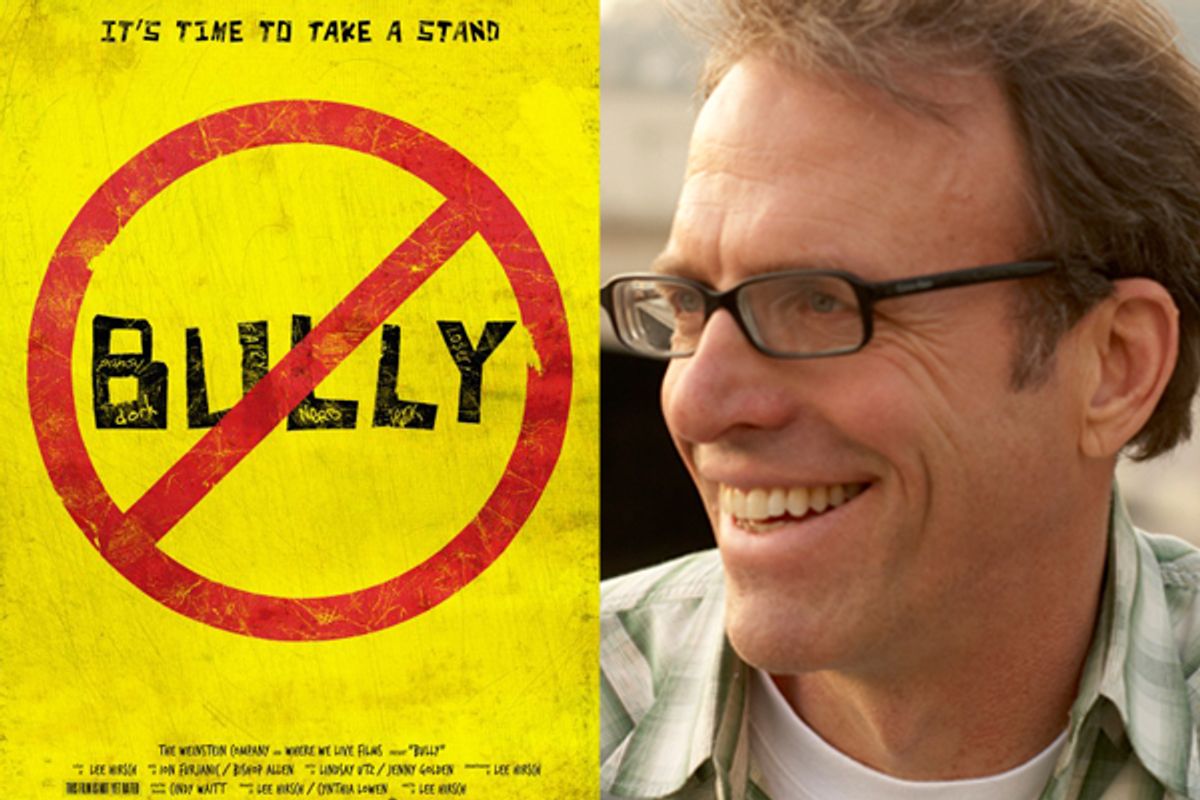 The release of the documentary “Bully” comes on the heels of a long-simmering (and undeniably ironic) imbroglio between two notoriously domineering forces: Harvey Weinstein, one of the film industry’s most feared hectors, and the monolithic Motion Picture Association of America. The film about teenage bullying was hit with an “R” rating last month, setting off weeks of tussling between Weinstein and the MPAA. Many celebrities and high-profile media personalities came out to support the film and raised awareness of its message in an unsuccessful campaign to convince the MPAA to change the rating. When “Bully” hits theaters tomorrow, it will run without an MPAA rating, making it potentially even more difficult for younger moviegoers to see it.

To help us unpack this situation, Salon has enlisted Kirby Dick, a filmmaker whose 2006 documentary “This Film Is Not Yet Rated” examined the MPAA and its controversial ratings system. Dick’s film explores how films are rated, noting the uneven relationships between sex and violence, heterosexual and homosexual subject matter, and the difference between major Hollywood releases and independent films in garnering vertiginously different ratings from the MPAA. In addition to interviewing filmmakers, industry insiders, religious figures and actors, the documentary also aimed to unmask the identity of members of the MPAA review board, a body whose members are kept secret despite their broad influence. What Dick’s documentary ultimately revealed was a practically indistinguishable connection between the agendas of the MPAA and major Hollywood studios.

Salon spoke to Dick over the phone from Washington, D.C., about the battle behind “Bully,” the role of the MPAA, and the larger meaning of this controversy.

What’s your take on the Weinstein Co.’s decision to release the film without a rating?

They did that, obviously, so that they can reach children under the age of 16, which is their primary audience. The intent of the film, as I understand it, is to change the behavior of how children related to other children in terms of bullying. It’s really their only choice, if they want to reach children under 16. It’s great if parents want to take their children to see this film, but on the hand, if children want to see this film, and they don’t want to go with their parents, they should absolutely be able to.

Another criticism of this decision is that an R rating greatly restricts schools from being able to screen the film and use it as an educational tool for students.

One upshot is that the movie theaters will ultimately decide who gets to see this movie. Do you think this is a better alternative?

No. Maybe it’s marginally better because you don’t have studios who produce movies determining the ratings of their competitors. The theater chains are so closely aligned in many ways with the studios, it’s not really a broad step. The best thing really is to give this information out to the public and to parents and give some very comprehensive information about the film, which the MPAA is completely capable of doing.

Right now what they do instead is they give out letter ratings with a few somewhat inscrutable descriptors attached to it and no one can really know what’s in those films. I don’t think it’s much of an improvement at all and I don’t think theaters should be making those decisions. Particularly a film like this. If a child wants to see this film, we should let them see it.

On the most simple, basic level, this is a film that will help children, help protect children, and even in some ways, save children’s lives, and protect children from lifelong psychological damage. If a child wants to go see that, whether they are a bullier or someone who’s bullied or someone who can intervene, let the children see it. Don’t set up this censorship to prevent them from seeing it.

Some groups including the Parents Television Council have said the decision to release “Bully” without a rating could derail the entire ratings system. What are your thoughts on that scenario and do you think it would be a bad outcome?

That won’t happen. It wouldn’t be a terrible outcome at all; it would probably be a beneficial one. This is a ratings system being run by a monopoly. Basically the six most powerful studios, which control 90 percent of the film business, and they have a system set up where they rate their films less harshly and they rate their competitors' films more harshly. It’s unbelievable that you could have this board of only parents with no training, with no guidelines, operating with no transparency, that not only rates the films of the MPAA, but rates their competitors, who have no recourse. It’s astonishing that an institution like this exists.

But will the film going out unrated start some kind of wave of theaters assessing unrated films and make the decisions themselves? No, absolutely not, because the theater chains are very closely aligned with the studios. Behind the scenes they are just as supportive of the MPAA as the studios themselves are. They have a very strong representation on the appeals board. I’m sure they were the ones voting, just like the MPAA was voting, to give this film an R rating.

A lot of actors and entertainers have come out in support of “Bully” in interviews, on Twitter, at events. Meryl Streep recently hosted a screening of the film. Do you sense there is something of a culture war developing between the MPAA and Hollywood actors?

What this does is point to the problem with censorship. When you have an organization arbitrarily making decisions and no one having any recourse and even any opportunity to evaluate how they apply this rating. This is the kind of egregious decisions that are made when someone takes control and there’s no transparency, there’s no oversight and there’s no opportunity for a fair appeal or anything like that.

This system operates perfectly for the MPAA. They have complete control without any accountability over a ratings system, and through this ratings system they can make sure that their films are received with the least possible restrictive ratings while their competitors’ films receive more restrictive ratings. Almost all of the time you see the real battle -- sometimes it’s with a filmmaker inside a studio -- but most times it’s with independent films and foreign films. This battle actually works for the MPAA because as long as they look like they’re holding the line against profanity, then this plays well to a large part of this country. In fact, they really don’t care one way or another. They just want to make sure they have control of the system so that their films are rated with the least harsh ratings possible.

If not this highly public battle over “Bully” or a film like yours that sheds light on the MPAA, what do you think could change this system?

Harvey Weinstein has been prominently featured in this fight, sort of carrying the banner for this issue because it’s his film. Do you think his efforts are disingenuous at all because he operates within the system and this could be viewed as a ploy to garner attention for the film?

It could be both actually. He could believe in the cause and it could also be a very shrewd financial move. I don’t know, it’s hard for me to speculate.

And if you could write the mission statement or better define what the role of the MPAA should be, what would you say?

I think it just should be to inform the public and in particular inform parents about the content of films so that they can decide whether or not they want to see a film or they want their children to see a film. The way they would inform the public is by having a fairly extensive description of what’s in each film in terms of language, sexuality, violence and other issues. It’s not hard for them to do and in many ways it would be much easier than rating themselves because they would just go through the films and list the instances of what’s in a film and you could read it very quickly, a paragraph really. And you could decide.

They have the capability of disseminating that widely and I’m sure that would work just fine. You could have a transparent system, but you don’t need it because all you would do is compare the descriptions of what’s in the actual film and if it doesn’t correlate, it would be obvious that they are trying to sway the system in their favor. These ratings with these very vague descriptors, it obfuscates the whole process.

This is why people are still calling me. I made this film six years ago and people still don’t know how this thing works. It’s not because people haven’t tried; it’s because there isn’t any information on this. This is a completely nontransparent system and that suits the MPAA just perfectly.

Have you seen anything with the MPAA change since your film came out?

No. They promised to release the names of the senior raters, they have not. I called them yesterday and they were unable to tell me the movie raters. They should really be listing everyone there. Again, it’s just absurd. If this were the CIA, I’d understand why they have to operate so secretly.

It’s sort of comical that they say the reason they have to maintain the secrecy for the raters is because the filmmakers would harass the raters when they were unhappy with the ratings they got. This is absurd. Juries are making much more important decisions about people's lives and they don’t get harassed and judges make the same kind of decisions. Filmmakers are a pretty well-behaved lot. It’s not like they’re criminals; they pretty much behave themselves.

Lastly, if you could name the most egregious act of the MPAA rating a film inappropriately, what would it be?

I think “Bully” is pretty high. I think it would be John Waters’ film “A Dirty Shame.” Getting an NC-17 rating for that was pretty incredible. “Bully” does because of the impact on society. It’s not just censoring an artist. One would hope that this film would have the potential to impact society by reaching these children and changing behaviors. If you can’t get the film to the children, how will that goal be accomplished?