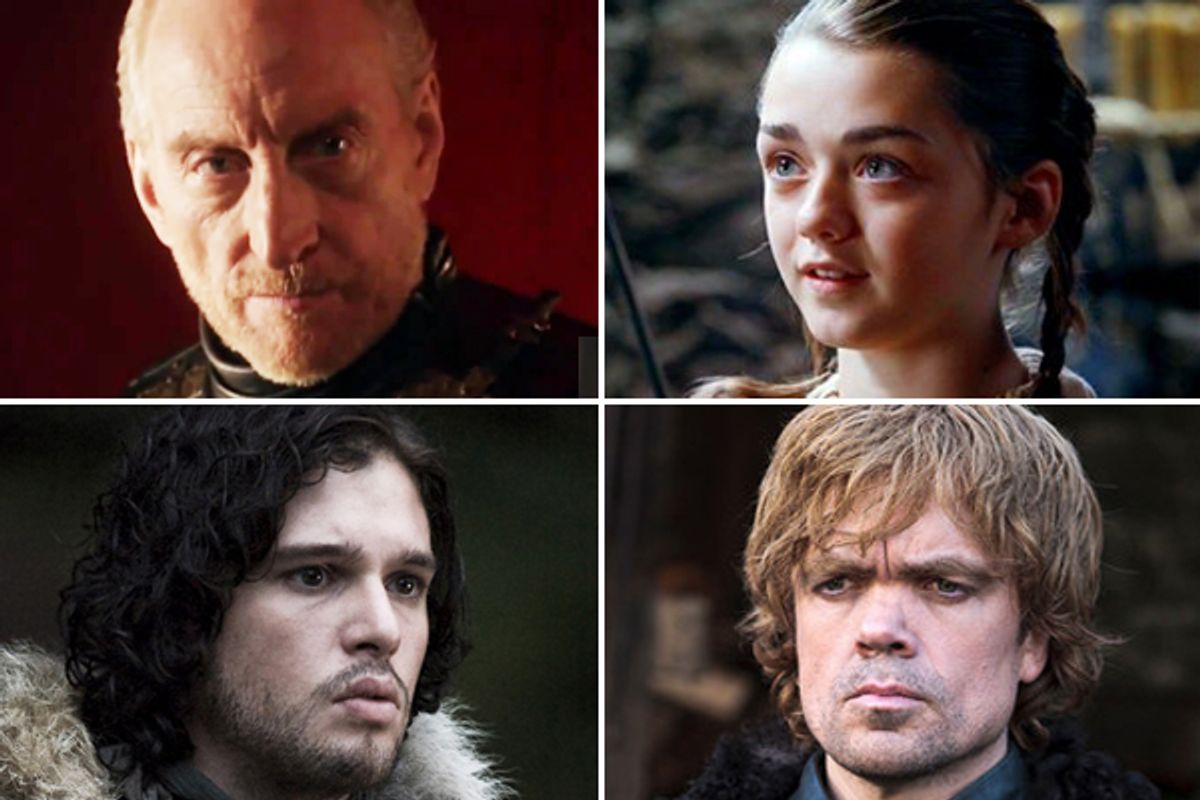 “Game of Thrones” isn’t the most likely parenting guide: Season 1 is bookended with beheadings and chock-full of incest. But when you’re about to be a dad you can find inspiration in unlikely places, and last April I had already maxed out my library renewals on “Your Baby’s First Year for Dummies.”

I didn't freak out when I found out my wife and I were going to have a son. But as the day approached, I had a crisis of confidence. We were living in a studio in Los Angeles, sleeping on a mattress that smelled like pumpkin beer from the previous fall, driving a two-door, 30-year-old car. How were we supposed to do this?

It turns out I was asking the right questions. We needed a new car and a new house; we got Ford’s least-monstrous SUV and a three-bedroom rental that cost as much as my old Brooklyn one-bedroom. And then, in the final weeks before our son arrived, we started watching "Game of Thrones." By the time our boy was born, I didn’t want to swaddle him; I wanted to thrust him to the heavens on top of a parapet and declare, “All this will be yours!”

“Game of Thrones” cares about children. Children are heirs. There’s no hemming and hawing about how they’re desensitized to violence or they cost too much to send to college. They’re a blessing — in many ways the only blessing — and even the evil ones have parents who love them.

I tried to remember this as I changed my son's diapers with the DVR paused and him screaming his head off. If I were Ned Stark, right-hand man to the king and Season 1's exemplary patriarch, I wouldn’t dare to complain about him. You're so strong! I thought as he kicked me. A hale and hearty lad! A darling babe at the breast! If Wildlings ransacked the house, they wouldn't kill you. They'd raise you up to be King-beyond-the-Wall! It helped, and when I unpaused with my wife, I attempted to learn some lessons from "Game of Thrones" about being a dad.

1. If you're not kicking ass for your family, your son should do it for you.

"Your Baby's First Year for Dummies" (which is a great book) explained that no matter what I did, I could never prepare for the moment when I brought home a little creature who was completely dependent on me. That's true, but the good news is it goes the other way. When Ned Stark is shamefully ambushed in King's Landing, Theon Greyjoy urges his son Robb to take revenge: “It's your duty to represent your house when your father can't.” I fully intend to use this line on my son if I ever get arrested.

Young Robin Arryn's breast-feeding was voted “Most WTF Moment in GOT” at Fanpop, and it's easy to see why. There's something unnerving about breast-feeding to begin with. Oh sure, it's beautiful and natural and it saves money on formula, but it's a fundamental repurposing of a woman's body: What was once A is now B (and maybe a little bit of A if the kid's asleep). The hijacking that starts in pregnancy continues until — well, for Robin, it appears to have gone on way past my wife's rule: “If he's old enough to ask for it, he's too old for it.”

3. The bigger the family, the better.

Once you have a kid, it's amazing how quickly people ask, “So are you going to stop at just one?” (It's the third question they ask, after “How's he sleeping?” and “Are you breast-feeding?” Kids are like privacy repellent.) My simple answer is “no,” because there's balance in my life right now between the time I spend with my son and the time I spend being me, but "Game of Thrones" has shown me that it's good to keep an open mind. On the show, you have as many kids as you can. Your kids protect you. They run the castle when you're away or dead. Little Bran Stark can't shoot an arrow to save his life, but his sister Arya can. Father Ned smiles: insurance.

I have an issue with dogs — I can't pick up after them. It's nothing personal; it just makes me feel like a servant. I limit my janitorial duties to my son, but after seeing the Stark family's dogs, or direwolves, rip into anyone who threatens their keepers, I'm thinking it might be worth changing my policy. Still: I'm only getting a dog if it's telepathic and can sense when my son is being menaced by a home invader.

5. It's supposed to be embarrassing when you introduce people to your father.

Tywin Lannister, father of Tyrion (the antihero dwarf played by Peter Dinklage), is one of the unheralded dads of “Game of Thrones.” He's fiercely loyal to his children and apt to say things like, “Family is all that lives on.” But he's tough to love — filthy rich and scary stern — so when Tyrion shows up with his running buddies Shagga and Bron, it's not a comfortable moment. But you know what? It shouldn't be. My father would always answer the phone in a Vincent Price voice to scare off my friends. I intend to do the same. I am not my son's friends' bro. I am to be feared.

OK, if I had more kids, chances are pretty slim that they would fight near a fireplace and one would shove the other's head into the flames. But those chances are a lot slimmer if I don't have a fireplace. This is why Sandor Clegane, the fighter whose scarred face is evidence of such an injury, teaches us not only about the emptiness of chivalry, but also child safety. My wife and I noticed quickly after our son was born that there are a ton of rip-off child-safety products out there, including fences that will fall on kids and drawer latches they will choke on. The easiest way to keep your home safe is just to not have things. No pool, no fireplace, no dining-room table, not even a dining room. No scars yet.

Cheat on your girlfriend and get in trouble. Cheat on your wife and end up in arbitration. Cheat on the mother of your children, though, and you're creating a world of hurt for innocent kids — including the bastards you might sire. Jon Snow, illegitimate son of Ned Stark, is so alienated from his half-siblings that he joins the military order of the Night's Watch, and before he enlists he cuts short his last chance to make love to a woman so he won't sire an unwanted child like himself. Tragic! Ned tries to reassure him, “You might not have my name, but you have my blood,” but it's really a father's responsibility to provide both.

Samwell Tarly, the cowardly whipping boy of the Night's Watch, confesses that he was told by his father, “You're not worthy of my land and title” before he was stripped of his inheritance and sent into service. Now, Sam can't fight, he has bad eyesight, and he hasn't really been taking care of his body -- but I'd like to see his dad. I bet the man isn't a paragon of courage or self-control. Kids learn by example, and it starts early. When it comes to food, for instance, I thought my wife's pregnancy would let us both load up on pickles and ice cream, but she said that her condition was no excuse to turn her body into a garbage dump, and she kept me on the straight-and-narrow, too. Now our son eats Brussels sprouts and mackerel. If I go up a pant size, I feel like I'm letting him down.

9. Whatever you do for your family, it won't necessarily be enough.

“Game of Thrones” is going to have to work hard to top the heart-wrenching death of Ned Stark, but even crueler than his beheading is the lesson behind it. Ned has a chance, when he's brought before Joffrey the false king, to speak truth to power. He lies to save his family — and gets executed anyway. No matter what I do to keep my family safe, I could end up with my head on a spike (or, more likely, crushed under a bus), so I really should have life insurance.

My favorite father-son moment in “Game of Thrones” is when Tywin Lannister says of his dwarf son Tyrion, “He might be the lowest of the Lannisters, but he's one of us.” Of course this is a lesson about loving your children no matter how they come out, and I'd like to think my wife and I have the courage to welcome any future additions no matter what prenatal testing reveals, but it's that “one of us” that gets me. The best part about having a kid, so far, is that I'm an “us.” I've managed to go from being alone to helping pilot a unit. It's like going from private to general, from the mailroom to CEO, but oddly enough I'm less anxious than I was before. Instead of worrying about a lot of little things, I worry about one.

Ned Vizzini is the author of It's Kind of a Funny Story, Be More Chill, and Teen Angst? Naaah..., as well as a writer on Season 2 of MTV's Teen Wolf. His work has been translated into seven languages. His next novel, The Other Normals, will be published on September 25, 2012. Follow him on Twitter @ned_vizzini or visit his website at www.nedvizzini.com.