As murder rates continue to drop across the nation, Philadelphia's soars. Can high-impact policing help? 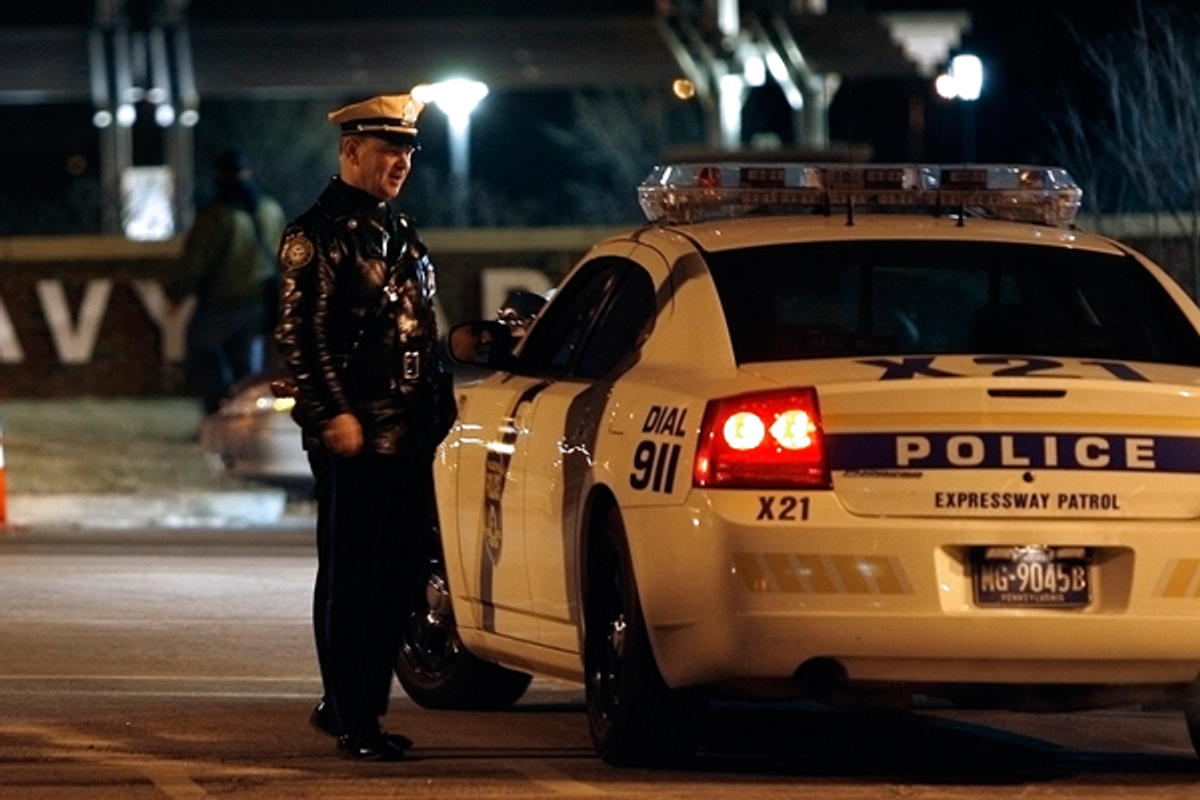 Philadelphia police are at the scene of a multiple shooting at the former Philadelphia Navy Yard in Philadelphia, Pennsylvania, February 12, 2007 (Reuters/Tim Shaffer)
--

On the evening of March 12, two Philadelphia teenagers were machine-gunned to death while riding a stolen ATV.

They were riddled with more than 30 rounds from an AK-47, as well as shots from a Glock.  A few hours earlier, a man in his 40s was shot to death with  children playing nearby at the  Belfield Recreation Center.  The victim, 43, was shot twice in the neck, once in the face and once in the head.  Police said he died at the scene.

It was, tragically, not an unusual day in the “City of Brotherly Love.”

As of March 28, the Philadelphia Police Department (PPD) reported 85 homicides since the beginning of the year — the majority of them committed by firearms.

That's a 6 percent increase over the same period last year — and if the upward trend continues, Philadelphia will be on course to beat last year's already grisly record. There were 324 murders in 2011, an increase of 6 percent over 2010.

While homicide was on the wane last year in most major U.S. cities, Philadelphia has continued to defy the national trend that has taken violent crimes like murder off the national news radar.

Philadelphia’s reported murder rate of  20.7 deaths per 100,000 population now tops U.S. cities with populations of more than 1 million.  (Chicago is number two at 15.7, and Los Angeles a distant third at 7.8.)

But against this grim backdrop, the city is fighting back..

On Jan. 27,  Philadelphia Mayor Michael Nutter, District Attorney Seth Williams and Police Commissioner Charles Ramsey  announced  a “Crime Initiative”  that focuses on what many believe is the source of the problem: the widespread availability of illegal guns, and lax enforcement of  mandatory sentences for illegal gun possession, particularly for repeat offenders.

In an interview with The Crime Report this week, Ramsey claimed that — despite the surge of  March homicides -- the new crime initiative has  already made a difference in getting “bad guys off  the street.”

“There is a 22 percent increase of individuals being held for illegal gun possession this year over last year,’’ Ramsey said, noting that the strict enforcement of  mandatory prison time for gun possession had swept up many repeat offenders.

“We (were) arresting the same people over and over again -- people who are on probation [and] who get away with carrying a gun,” he continued. “There (was) very little incentive for them to stop doing what they’re doing if there’s no jail time imposed.”

“I think once people see that there’s an actual consequence when someone is arrested committing a crime, they’ll be more likely to come forward,’’ he said.  “Part of the problem has been the revolving door; a person feels, “I provide info, [but] before I leave the station, the person is back on the street.”

But can the Crime Initiative alone grapple with an issue that has deep roots in the city’s economic and demographic problems?

Philadelphia has been an extremely violent city since as far back as 1990 when — along with New York City and other major cities — it registered record numbers of homicides. In Philadelphia, the murder toll reached 525 that year.

Why, when other cities have recorded remarkable declines, is Philadelphia still suffering from a killing spree?

One grim facet of the Philadelphia murder statistics may help provide a clue to the answer. Victims and killers alike were overwhelmingly young males.

Forty percent of the killers arrested in 2011 were males between the ages of 18-24, with 22 percent in the next oldest category, from age 25-34.  Murder victims showed a similar demographic, with the great majority young males.

“The vast majority of violent crimes are committed by a tiny fraction of the population,’’ adds  PPD spokesman Lt. Ray Evers, noting  that some 80 percent of the perpetrators and victims have “records of multiple convictions for violent crimes.”

Moreover, most of the homicides occur in a few identifiable sectors of the city's poor neighborhoods, where “crews” of young men form part of a low-level gang culture, Evers says.

“They sell drugs, but not as a primary enterprise,” he says, pointing out that few of the homicides appear to be drug-related.  “A lot of the killings are over arguments (like) ‘you looked at my sister wrong.’”

The PPD’s crime statistics for 2011 show that the biggest single cited cause of homicide was “arguments” (38 percent).

Jerry Ratcliffe, chair of the Department of Criminal Justice at Temple University, believes that is a powerful indicator of why Philadelphia’s violence has been so hard to curb.

“Causal factors are difficult to determine when the cause of so much homicide is not necessarily the economy or the drug trade, but the simple fact that two people are unable to settle a dispute in a non-violent manner,” he told The Crime Report.

The result, says Ratcliffe, is a “culture of violence,” where “guns are habitually used to settle disagreements” — concentrated in some of the city’s poorest neighborhoods.

And that can envelop an entire community in dysfunctional behavior.

In a recent article published in the Philadelphia Inquirer, Associate Professor Daniel R. Taylor of the Drexel College of Medicine cited a 2001 study, which found that children in the city’s high-crime areas were regularly exposed to violence that most Americans only see on the TV or movie screen.

The study, which focused on 7-year-olds, found that 75 percent of the children reported hearing gunshots; 61 percent worried that they might be killed; 10 percent had seen a shooting or stabbing inside the home; and 18 percent had seen a dead body outside.

The pervasiveness of violence, fueled by “poverty ... hopelessness and easy access to firearms,”  leads to the kind of contagious effects similar to an epidemic, Taylor observed.

Philadelphia has been hit particularly hard by the national economic crisis. U.S. Census figures for 2011 show that more than 25 percent of the Philadelphia population lives below the poverty line — more than twice the average for the state.

Nevertheless, the link between economic hardship and violent crime remains questionable. Even at the height of the nation’s economic troubles, national crime rates continued to fall.

The “culture of violence” theme has been picked up by city officials as well, most notably by Philadelphia’s Mayor Nutter.

In public comments Jan. 3, after the city’s first weekend of the New Year had seen a horrendous six homicides, Nutter characterized the city’s killings as generally resulting from arguments.

Another crucial element in the city’s push-back against violent crime is an increased focus on tracking illegal guns, including posting rewards for information leading to arrest and conviction of murder suspects and persons illegally carrying guns.

Ramsey, who was appointed head of the Philadelphia Police Department after successful stints as police chief in Chicago and Washington, has been outspoken on the role played by illegal guns in the city’s homicide epidemic.

In his interview with The Crime Report, Ramsey noted that shooting victims were sometimes found with as many as 10 to 14 bullets in their bodies.

Why do the shooters, nearly all of them young males, fire so many bullets at the young males they shoot?

“One reason they keep pulling the trigger,” Ramsey said, “is because the capacity of the gun allows them to do so. When I was first in police work, the guns were called Saturday Night Specials.

“They were usually low-caliber weapons and fired four or five shots.  Now they have very high-caliber weapons with much higher capacity. With a Glock you can fire 17 shots.’’

Other law enforcement sources contacted for this story have commented that Philadelphia street criminals consider it a matter of status to own a new, high-tech handgun like a Glock or a Sig-Sauer.  Both are semi-automatic pistols with magazines that carry a dozen or more cartridges, in calibers up to 10 mm.

“With those guns,” said Ramsey, ”you’re going to have more hits, and the possibility of death is much higher. We have people literally bleeding to death before they can get to a trauma center.”

In their January announcement, Ramsey, Nutter and Williams also promised to put more officers on the street later in the year, in addition to focusing intense police presence in high-crime areas, similar to the “high-impact” policing strategies developed in New York and other large cities.

That’s been tried before in Philadelphia, with good effect.

The high-intensity police deployment planned for 2012 is a rerun of “Operation Pressure Point” deployed in 2009. That year saw a drop in homicides to 302 from the previous year's 331.

The revived program, called Operation Pressure Point, will be launched next month.

But no one believes that the police can solve the problem themselves.

Francis Carmen, who works as a public defender in the city and specializes in murder cases, says that "putting more cops on the street would be akin to hiring more street cleaners in an effort to stop people from littering.”

“It’s responsive, not preventative,” he explains.

Besides Ramsey’s repeated calls for citizens to work more closely with police — coming forward with information about crimes they have witnessed -- a significant element of the 2012 Crime Initiative is a plan to develop partnerships with groups that are already working to combat crime in the city’s poorest neighborhoods.

Bryan Miller, a board member of “Heeding God’s Call,”  a faith-based, anti-violence group, and a former director of Philadelphia Ceasefire, which worked with troubled youth, is encouraged by the plan, as well as what he says is the city’s stepped-up prosecution of gun homicide cases.

“The battleship hasn’t been completely turned, but it’s turning,” he said when he was interviewed last month.

“We still continue to be plagued with violent crime in our city,’’ he said, “but it’s all fixable stuff. We’re taking the necessary steps and people are going to see the difference.”