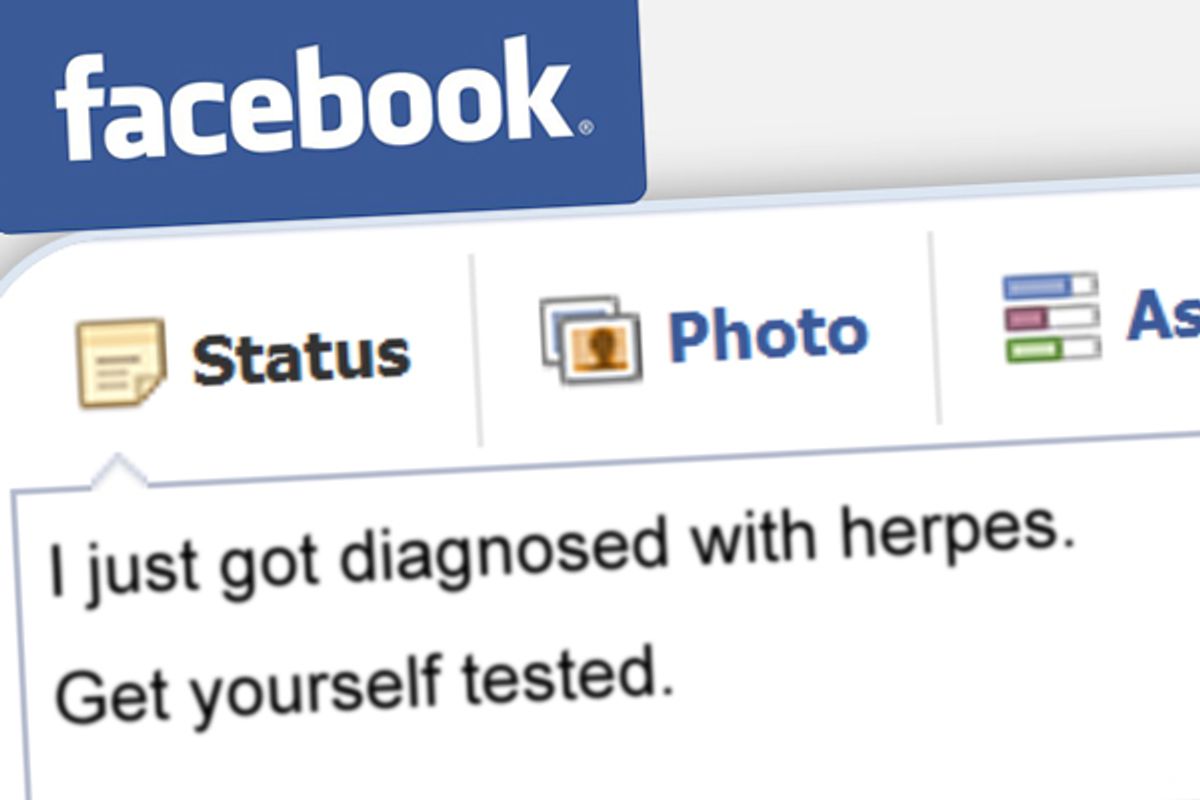 Imagine being able to download a Facebook app that would alert you to your sexually transmitted infection risk based on your friend's status updates. This may sound far-fetched, and it still is, but as some researchers shift their focus to risk among friend groups, as opposed to just sexual partners, social networks are rapidly becoming a tool to prevent the spread of STIs.

Peter Leone, a professor of medicine at the University of North Carolina's Center for Infectious Diseases, is one of those experts. Earlier this month, he spoke at an international health conference and underscored the importance of exploring such possibilities. Real-world social networks -- in other words, a person’s circle of friends and sexual partners -- have already proved to be strong predictors of STI risk, he says. It follows that sites like Facebook, which convene all of those real-world connections in one virtual setting, have huge potential in this arena.

Leone found that when sexual partners of patients newly diagnosed with HIV came in for testing, 20 percent turned up HIV-positive. It might seem counter-intuitive to extend the targeted test circle to those a newly diagnosed patient is merely friends with, but people in the same social circle often sleep with the same people, and might engage in similar risk-related behavior. Instead of looking at people within a particular at-risk demographic, this approach allows them to target known clusters of infection.

Makes you think of the people on your "Close Friends" list a bit differently, doesn't it?

Leone’s team asks patients newly diagnosed with HIV for a list of sexual partners and friends who they think might benefit from testing. Then, with the patients’ permission -- permission that is more likely in North Carolina because partner notification, in one form or another, is required by law -- they will contact people, sometimes using Facebook, with the alarming news that someone they know has been diagnosed with HIV, and that they might be at risk and should be tested.

There is a major shift here away from the traditional approach of either targeting at-risk demographics -- like African-American men who have sex with men -- or sexual partners of those infected. “People think that you have to be directly connected to someone, and I think of it as a population-level effect,” he says. “It would be no different from someone who goes to a picnic and gets food poisoning. We’re concerned about everyone that was at that picnic.”

To further streamline the process, researchers have also been experimenting with mailing kits to patients who can then collect their own swabs for tests like gonorrhea or chlamydia -- or even HIV. “I think that's the future,” says Leone.

There are other potential approaches that are more reliant on Facebook -- like the hypothetical STI app -- but those come with serious privacy concerns. James Fowler, a professor of medical genetics at the University of California, San Diego, and author of "Connected: The Surprising Power of Our Social Networks and How They Shape Our Lives," has already helped develop an app that utilizes status updates on a social networking platform to predict one’s risk of catching the flu. Certain keywords in your newsfeed might signal an increased risk of catching the virus, and the app could notify you accordingly. Instead of saying, “You have a chance of getting the flu in September,” he says, the app tells you, “You have a chance of getting the flu today.”

A similar application for STI risk is imaginable, although certainly more complicated. The spread of the flu is more straightforward and based on basic contact, as opposed to carnal entanglement. "The difference is there's much less stigma to finding out which one of your friends has the flu," he says. It would be a dramatic understatement to say that people are much less likely to post status updates about their herpes flare-up than about their nasty stomach bug.

There are plenty of other prevention approaches that are both easier to implement and less likely to raise major privacy red flags. Common wisdom has it that the power of social networks is in making things go viral, but that isn’t enough when it comes to safe sex messaging. "Spreading information is easy. Changing behavior is hard," Fowler says. Instead of simply delivering a simple message like "wear condoms," the aim is to set examples within social networks. "There is good evidence that [in terms of sexual behavior] we're influenced by seeing what our friends are doing,” he says. "It takes real, deep, close social contact for people to change their behavior.” For example, if someone’s friends start posting status updates about getting tested themselves, it might destigmatize and normalize it. That’s the aim of MTV’s and The Kaiser Foundation’s GYT campaign, which has called on young people to get themselves tested and check in on Foursquare while at their local clinic.

Sean Young, a researcher at UCLA's Division of Infectious Diseases, tells me that social networking sites are most useful as portals for information and conversation about risk and testing. He’s done research where at-risk individuals are recruited and trained to participate in Facebook groups where they then talk about testing and pass along important resources, all in an attempt to "change social norms that HIV testing is both healthy and admired behavior."

The research in this area is still young, and there are more dazzling hypotheticals than concrete solutions, but many researchers have a basic intuition that social networking sites have the potential to succeed in areas where traditional medical approaches have failed. Leone puts it this way: "Social marketing is used to sell products, it certainly should be used to talk about health," he says. "It takes the locus of control away from the public health system and really makes it about the relationships that exist already between friends."