Is "Game of Thrones" too white?

Fantasy fiction might have racial problems, but they're just a reflection of America's broader battles 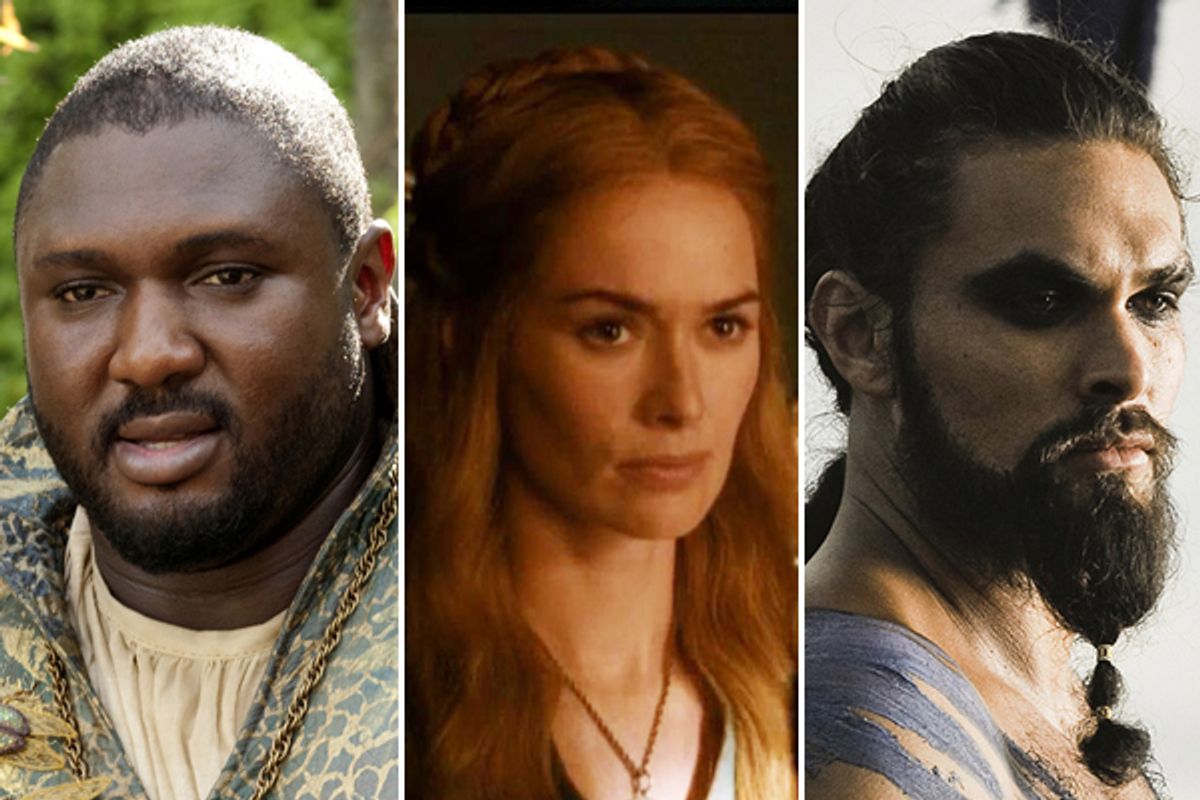 Ser Jorah’s face grew thoughtful as their horses trod together down the godsway. “When I first went into exile, I looked at the Dothraki and saw half-naked barbarians, as wild as their horses. If you had asked me then, Princess, I should have told you that a thousand good knights would have no trouble putting to flight a hundred times as many Dothraki.”

Epic fantasy -- sprawling stories full of swords, castles, magic, kings and lots and lots of white people – is slowly finding its way into America's cultural mainstream. In the age of the anemic box office, Peter Jackson's films of J.R.R. Tolkien's Lord of the Rings trilogy remain a gold standard of blockbusterdom – and his forthcoming version of "The Hobbit" will almost certainly follow suit. Newer writers like Brandon Sanderson and Patrick Rothfuss have sold hundreds of thousands of their "door-stopper" tomes of wizardry and courtly intrigue. And tonight, countless viewers will be glued to their sets for the return of what is arguably the hottest show on television, "Game of Thrones," HBO's adaptation of George R.R. Martin's A Song of Ice and Fire fantasy novels.

This is all a bit odd for those of us who grew up with – maybe even got beaten up for – an obsession with these sorts of books. Accustomed to being mocked for our profoundly uncool fixations, many fantasy nerds, myself among them, have an almost nurtured notion that our love of the fantastic and the pseudo-medieval is something that the rest of the world Just. Doesn't. Get.

But now, as our beloved genre finds its way into "normal" people's hearts and minds, fantasy fans are increasingly confronted with an inversion of this notion – a question that I, as an Arab-American fantasy fanatic, have been wrangling with for years: If the mainstream doesn't get fantasy, just how well does epic fantasy, with its lily-white heroes, get the multicultural real world of 21st-century America? As some of the most popular works in the genre's history – works that shed any pretension of being children's fare – A Song of Ice and Fire and its wonderful TV spawn are particularly useful springboards for this question.

When it comes to inherited conventions regarding race in epic fantasy, "Game of Thrones" is, in a sense, standing on the shoulders of dwarfs. The Lord of the Rings is the most obvious predecessor to Martin's work, and it's not hard to find subtle rhetorical responses to Tolkien in his books. When Time magazine dubbed Martin “the American Tolkien,” it highlighted not only Martin's rather astonishing genius in world-building and narrative scope, but also the ideological baggage that all of us writing in the genre have inherited from our shared progenitor.

And it's heavy baggage indeed, however much we love Tolkien's creation. His half-sublimated wranglings with race are more complex and fraught than either his shrillest detractors or his most fawning defenders would have us believe. But there is some irreducible ugliness in his masterpiece that really can't be convincingly redeemed. The men of the global East and global South (“black men like half-trolls with white eyes and red tongues”) are monstrous and evil, naturally and culturally inclined to bow to Sauron, and to make war on the good men of the North and West. The bestial visages of orcs bear a striking resemblance to racist caricatures of African and Asian facial features. Above all, to be dark-skinned in Middle Earth is to be part of a savage horde – whether orcish or human – rather than to be a true individual.

The savage hordes described by Tolkien have been imported by his dozens of imitators over the years, becoming a mainstay of fantasy in books, movies and video games. It's a convention that Martin both takes up and departs from in depicting the Mongol-inspired Dothraki. As a people en masse, the Dothraki value only their horses, treating life cheaply, and reveling in violence:

Across the road, a girl no older than Dany was sobbing in a high thin voice as a rider shoved her over a pile of corpses, facedown, and thrust himself inside her. Other riders dismounted to take their turns. That was the sort of deliverance the Dothraki brought the Lamb Men.

The HBO production – which has been so remarkable on so many fronts -- has exacerbated this hard-R-rated cartoonishness, bringing out some of the novel's more unfortunate tendencies. The show's depiction of the Dothraki has been positively cringe-inducing. In the novels, Martin's quasi-Mongol warrior culture is depicted in a problematically essentialist, but still complex fashion. But HBO has nudged Martin's creation fully into racial caricature by casting a seemingly random variety of colored people, and apparently raiding productions of both "Hair" and "Braveheart" to clothe them.

Even so, by skillfully replicating the juxtapositions posed by Martin's back-and-forth POV, the show has managed also to replicate his ultimate, rather un-Tolkienish subtext: There is nothing unique about the savage horde's savagery. If Dothraki society is depicted as violently perverse, so is Westerosi (i.e., quasi-European) society, which bows to the whims of the Aryan-featured boy-monster King Joffrey, and which has knighted mass murderers and rapists like Ser Gregor Clegane, one of the most horrifying minor characters in all of fantasy. Every culture is savage in "Game of Thrones," and that's a very different view of the world than what Tolkien gave us.

Sunday's Season 2 premiere begins HBO's adaptation of "A Clash of Kings," the second book of A Song of Ice and Fire. Book II is even more wide-ranging in terms of setting and scope than Book I was, so viewers can expect brief glimpses of characters from other parts of the world, including the Summer Isles, Martin's analogue for Africa.

Unfortunately, some of these depictions partake in some pretty familiar stereotypes about African sexuality. It will be interesting, for example, to see what the show does with Chataya, an associate of Tyrion's from the Summer Isles, and an upscale brothel madam. Chataya blithely sends her own 16-year-old daughter into prostitution at her "pillow house."

Chataya continued, “My people hold that there is no shame to be found in the pillow house. In the Summer Isles, those who are skilled at giving pleasure are greatly esteemed. Many highborn youths and maidens serve for a few years after their flowerings, to honor the gods.”

“What do the gods have to do with it?”

“Remind me to tell the High Septon,” said Tyrion. “If I could pray with my cock, I’d be much more religious.”

Again, an entire nonwhite culture is presented as holding skewed values. But this wince-inducing depiction is tempered by some interesting implied questions about sex and commerce and spirituality and culture and power. Here's hoping there's a hint of this in the show's version of things as well.

Part of the challenge of adapting Martin's novels for television has to do with honoring his skill in constructing jaw-droppingly epic sweeps of plot and setting from beautifully rendered small details. If there's a saving grace for the racial imagery in A Song of Ice and Fire, it's in some of these little glimpses and hints that appear throughout – skillful deployment of which on"Game of Thrones" could help make an already good show great.

As an example, the only black character in the first novel is the barely mentioned, but deeply intriguing Jalabhar Xho, “an exile prince from the Summer Isles who wore a cape of green and scarlet feathers over skin as dark as night.” In the first novel, Xho's most notable act is to frighten one of Sansa Stark's fellow court ladies with his exotic appearance. So the first black guy to show up in A Song of Ice and Fire basically scares a white girl and then disappears. (He also ties for second place in an archery competition.) Not exactly marquee stuff, but – if online reader reactions are any measure – tantalizing. Yet the character didn't appear at all in Season 1 of "Game of Thrones" – an understandable enough choice, given that Xho is essentially court furniture, but still a disappointing one for those of us who notice such things.

Another minor character who might have been used a bit more effectively to add a smidge of color to the screen in Season 1 is Syrio Forel, Arya Stark's vaguely Mediterranean "dancing master" (a gender-acceptable euphemism for "sword-fighting teacher"). Forel is a fan favorite among readers, much more than one might guess from his brief appearances. The show could certainly have added a scene or two more of the wonderful actor Miltos Yeromelou, giving us just a bit more of his character training Arya in the deft swordsmanship of the East. All the more so because Arya's POV on the show has thus far felt a bit diminished from the books. One supposes training flashbacks are always possible ...

Of necessity, turning 1,000 pages of prose into a relatively few hours of screen time involves dropping, combining and retooling elements of a novel. "Game of Thrones" has already taken a few liberties with Martin's books – cutting minor scenes, combining some characters and eliminating others, and (most notoriously) signposting plot points and character motivations through clumsy new "sexposition" scenes. It would be nice if, moving forward, the writers and producers chose as well to keep an eye on these sorts of promising moments of cultural variety and -- dare I say it? -- color in Westeros. But, given the contempt our culture currently holds for anything smacking of the much maligned (if chimerical) "political correctness," I'm not holding my breath.

As an Arab-American writing fantasy fiction, I've been asked more than once whether fantasy's race problem is in a better place now in the Age of Martin than it was in the Age of Tolkien. My short answer is yes, but honestly, I think such questions are almost beside the point.

Ultimately, A Song of Ice and Fire, like the Lord of the Rings, is the work of a brilliant and conscientious writer who is nonetheless writing in his own time and place. The United States in 2012 is, far too often, and even with a black president, still a culture rich in racist stereotypes and xenophobic fear-mongering. Expecting a writer to remain entirely unstained by this is expecting a person to live underwater without getting wet. If we still find troubling racial assumptions and caricatures in fantasy – whether on the page, or on the big or small screen -- this probably tells us more about our culture-wide problems than it does about a single writer's, or a single show's issues. A Song of Ice and Fire is indeed our American Lord of the Rings, and if Westeros has its race problems, they are simply a powerful reflection of America's.

Saladin Ahmed has been a finalist for the Nebula Award for Best Short Story and the Campbell Award for Best New Science Fiction or Fantasy Writer. His fantasy novel "Throne of the Crescent Moon" was recently published to wide acclaim.