With a general strike planned for May 1, Occupy is looking for new ways to organize the under- and unemployed 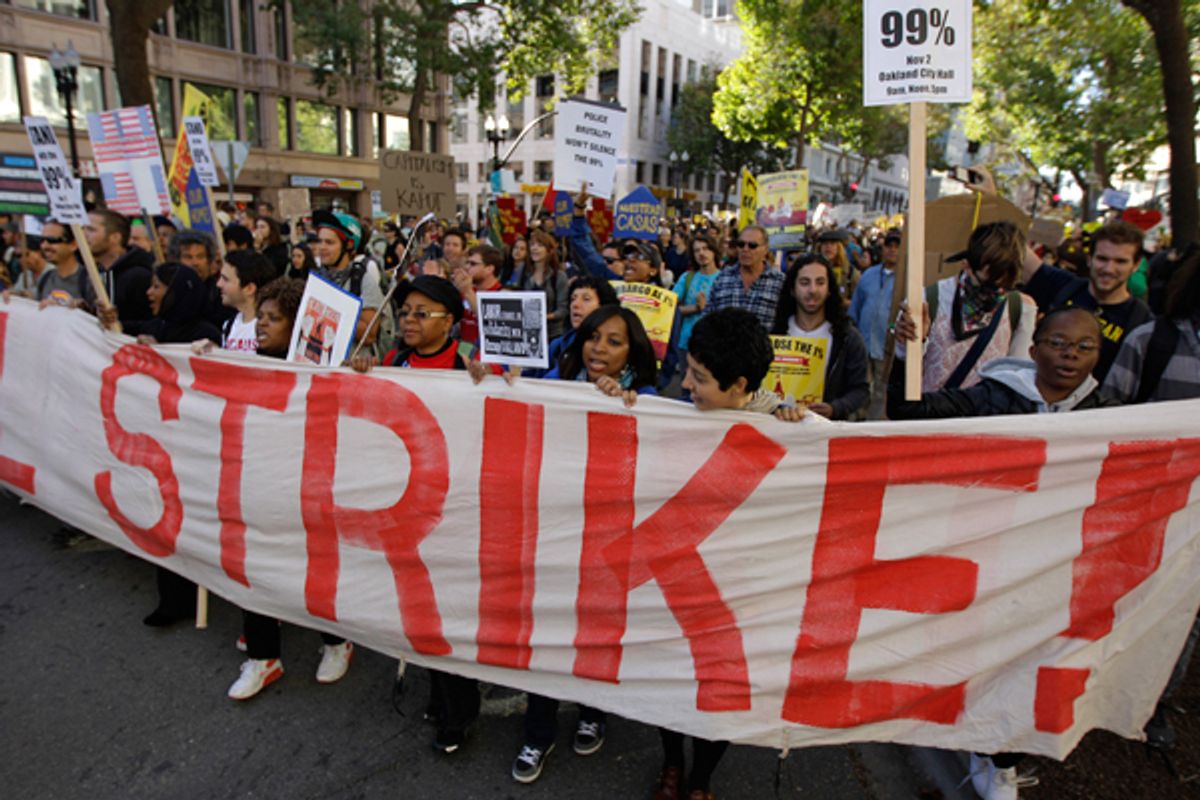 Of the many questions that the Occupy movement faces before its May 1 general strike, the most important may be who exactly will be striking. Due in part to restrictive U.S. strike laws, organized labor has not endorsed the action. And many of the protesters from which the Occupy movement has drawn its energy are the under- and unemployed who have been victimized most by the economy -- people who are not exactly in a great position to withhold their labor.

That's where the Precarious and Service Workers Assemblies come in. These groups have been popping up around the country to try to forge links between unorganized laborers with tenuous employment. Last  month, the first such meeting in New York drew 60 some people from an odd mix of professions -- writers, adjunct professors, bar backs, dog walkers, baristas, sex workers, movers and designers. Despite their very different backgrounds, they discussed the one thing they all shared: a precarious earning situation. This was more than just an occasion to share their fears. It was, as the event invitation noted,  an organizing platform to "engage together in upcoming actions like the May Day General Strike."

What this gathering and others like it suggest is that Occupy is taking a different approach to the general strike than the one you might expect -- one appropriate to precarious, non-unionized and largely service-oriented workers. When the Oakland Precarious and Service Workers Assembly gathered in early March, the organizers wrote, "For many these days, our work is defined by its precarity. We lack job security, work for laughable wages, and have no healthcare or potential for advancement."

As the precarious workers assemblies and numerous articles and books suggest, many see the currently disparate army of insecure workers as a potent political force. Some theorists have even sought to frame precarious workers as an emerging social class – the “precariat,” as described by Guy Standing, professor of economic security at Bath University. According to Standing, the precariat is a class in the making insofar as there are multiple examples of precarious workers joining together with a growing awareness of common vulnerability. There is some truth in this: In the Occupy Wall Street meetings dedicated to exploring the call for general strike, over-educated freelancers like myself met with migrant laundry workers to discuss lacking healthcare insurance and job security.

Some wonder, however, whether these new groups are capable of pulling off a general strike without support from organized labor. Without the support of unions, some have argued, workers will not have the confidence to miss work and take to the streets. It's a prisoners' dilemma of sorts: Individual workers, some say, are afraid to strike in fear that other individuals will not -- even though the greater the pool of strikers (even non-unionized strikers) the more difficult it will be for employers to retaliate.

But the question of whether a general strike can take place without organized labor’s formal support seems to me moot at this point: No one is working under the impression that May Day in New York will resemble the general strikes of 1946, for example, or even contemporary general strikes elsewhere, like last week in Spain, when two powerful unions called a general strike and 3 million people took to the streets.

It is also worth noting that in Greece – where mass strikes in recent years have been successful in temporarily paralyzing the economically beleaguered country – some of the most celebrated strikes have been largely accredited to the Syntagma Square movement (an Occupy forebearer), not the unions. As Dimitris Dalakoglou, co-editor of the book "Revolt and Crisis in Greece" told me:

Greece saw some of its massive and most successful general strikes in summer 2011, because at that time the movement of Syntagma Square had brought the spirit of autonomous, self-organized struggle away from union executives and political parties … The day of the strike, the majority of strikers did not bother with the union's afternoon rally, they went from the morning to Syntagma and fought against the economic and political sovereignty and the brutal violence of the police there next to the people who were occupying Syntagma for one month.

However, questions still remain about the specific challenges facing different precarious workers who might be interested in involving themselves in May Day. How, for example, can someone leave work or call in sick for the day if they know they will be fired and lack a union to defend them? Or, how might someone strike if they work flexibly and don’t need to turn up to an office that day anyway? And how do unemployed people strike at all?

All these questions rely on a traditional notion of strike (withdrawing labor as leverage against an employer) or even general strike (that the majority of workers in a country or region walk off the job in solidarity with each other). Occupy organizers, though, are planning a very different type of general strike. Calls include a consumer strike (“No Shopping! No Banking!”), student debt strikes, school walkouts, a data strike (leave the smartphone at home), slow work days and, of course, calls to take the streets. The idea is that, given the variety and vulnerability of working situations, there’s no one catch-all way to strike – so a strike will need to have many diverse elements if it is going to be general.

In New York, we have already seen rumblings of the type of activity May Day might bring. In the last week of March, a number of activists self-affiliating with OWS who according to a communiqué were working “in conjunction with rank and file workers from the Transport Workers Union Local 100 and the Amalgamated Transit Union” chained the doors open of numerous subway stations and printed signs that resembled those of the Metro Transit Authority informing passengers “Free Entry, No Fare. Please Enter Through The Service Gate."

Regardless of one’s opinion on the particulars of the subway action, the fare strike gives one example of the type of strike a work force underpinned by precarity can engage in: those that did not pay the fare made a strike of sorts; those who chained the station doors open made a more daring one. In either case, it was certainly not endorsed by union bureaucracy.

Of course, the actions undertaken by certain groups to promote or partake in the general strike will not please everyone – the fare strike alone has already received equal helpings of criticism and celebration both within and outside Occupy Wall Street discussions. What’s clear, however, is that with under 12 percent of the U.S. work force unionized, an autonomously, horizontally organized “precariat” could be a potent force for political and social rupture. As such, it might be high time that the media stop turning to union leaders to ask about what a general strike could mean.