Why Rush Limbaugh and the right turned on Trayvon Martin

A national tragedy became another awful political shouting match, thanks to vile pundits and talk-radio hosts 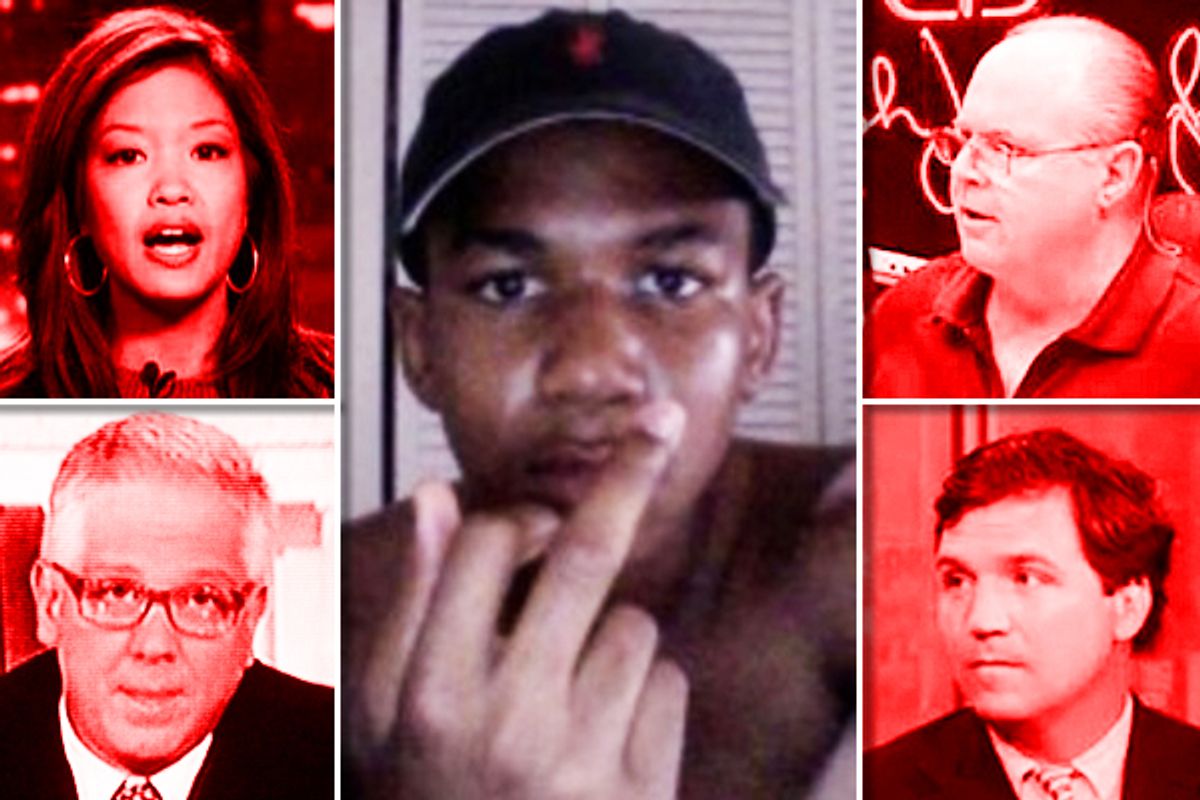 Center: A photo of Trayvon Martin, taken from his Twitter feed by the Daily Caller and disseminated by right-wing media.
--

Seventeen-year-old Trayvon Martin was killed by a gun-toting, self-appointed "neighborhood watch leader" named George Zimmerman on Feb. 26, in Sanford, Fla. Zimmerman was not and has not yet been arrested. Martin's death took some time to go from a local news story to a major nationwide controversy, but once it went national it quickly became huge. Coverage from the Huffington Post, a March 8 CBS News report and related Associated Press stories led to widespread Internet and cable news coverage.

Except on the right. In the parallel conservative media bubble, of Fox News and talk radio and right-wing websites, Trayvon Martin's story didn't register. Even after the major national newspapers began getting into the story, after the NAACP began demanding the Justice Department investigate, the right-wing press and commentariat kept silent. Drudge completely ignored the story. By March 19, Fox News had done precisely one Trayvon Martin segment. It was still possible, on March 21, for Mother Jones' Adam Serwer to write that "the right-wing reaction to the shooting of Trayvon Martin has been mercifully muted."

When right-wing media figures first began to weigh in, it was with (occasionally surprising) thoughtfulness . On March 22, Allen West, a congressman who regularly explores new frontiers in unhinged right-wing provocation, posted an angered but measured response to the Martin killing on his Facebook wall, calling police inaction "an outrage." Reihan Salam, writing at the National Review, said "I get the tentative sense that this conversation hasn’t gotten crazily polarized." On March 23, National Review editor Rich Lowry wrote a piece astoundingly headlined "Al Sharpton is right."

On March 23, two things happened: Buffoon Geraldo Riviera made his infamous remarks on the role Martin's style of dress played in his death -- a dumb point dumbly made -- and President Obama told the press: "My main message is to the parents of Trayvon Martin. You know, if I had a son, he'd look like Trayvon."

It was basically on this day that everything went to hell. The story of an unarmed teenager shot dead while walking home and a police force that decided that didn't constitute a crime suddenly became a partisan issue with numerous points of contention.

Here are four reasons this became another right-versus-left shouting match:

1. The conservative movement denies the existence (or prevalence or impact) of racism.

Though toxic racial resentment is one of the most powerful driving forces behind contemporary right-wing populism, the conservative movement largely prefers to believe that racism was "solved" many years ago, most likely on the day Martin Luther King gave the "I Have a Dream" speech. The corollary to this belief is that accusations of racism are the new racism, and said accusations are invariably politically motivated.

As Elspeth Reeve pointed out in a sharp piece for the Atlantic Wire, the Trayvon Martin case posed something of a problem: No one was accusing anyone other than George Zimmerman of racism. There wasn't an obvious political partisan advantage to raising awareness of Martin's death. But some right-wingers find any acknowledgment of racism by liberals to be blood libel against all conservatives. And so ... they began defending George Zimmerman's honor, and smearing Trayvon Martin.

Glenn Beck's site, the Blaze, led the charge, suggesting without much in the way of evidence that Martin was "the aggressor," based on nothing other than the fact that he had been suspended from school. (The site also threw in some speculation that Martin may have been an arsonist.) The sole reason for this was a pathological need to deny the existence of any form of racism that doesn't take the form of liberals hating white people.

In order to argue that Zimmerman found Martin suspicious for some reason other than the sole fact of his black skin, conservatives began seeking evidence that Martin was terrifying. The evidence all basically revolved around his blackness, but "logic" doesn't have much to do with the popularity of the fake "Trayvon" photo, sourced to the neo-Nazi message board Stormfront and briefly featured at Michelle Malkin's new site "Twitchy." (The photo was, in fact, of another black teenager that Stormfront and Twitchy had mistaken for Martin.)

Tucker Carlson's Daily Caller is now the Internet's leader in the ongoing campaign to make Trayvon seem threatening. Mediaite's Tommy Christopher had a good (or depressing) close reading of the Caller's coverage, which ran the gamut from Martin-smearing to credulity-straining Zimmerman defenses (in one video freeze frame he looks like he might have a big scar, of the sort caused by scary black kids).

As you can see, The Daily Caller was very thorough when it comes to covering Al Sharpton riling up black people, or Jesse Jackson showing up late, or President Obama being a bad, bad man, or George Zimmerman telling his side of the story and gaining “momentum.” They were so thorough that they even managed to work communists and Father Pfleger(!!!) into their coverage, and obtain the expert legal opinion of Rep. Ron Paul (R-TX). They’ve also been very thorough about conducting an internet grave-robbing, posting two rounds of tweets from the slain teenager’s closed Twitter accounts. [emphasis his.]

This devolved into the now common Internet practice of showing pictures of Martin posturing for the camera, giving the finger, arguing that the liberal media didn't want you to know what Martin really looked like. How do photographs like that affect the facts of his shooting as we currently understand them? People who are already scared of young black men and people who exploit the fear of young black men for political purposes simply and sincerely believe that Americans as a whole will be less likely to feel that an injustice has occurred if they learn that Trayvon Martin was scary and not adorable.

(The Caller has begun to slightly rein in its coverage, following widespread criticism of its awfulness, but we'll see how long the restraint lasts.)

The "highbrow" version of this barrel-scraping garbage is, say, Jonah Goldberg's ponderous column and blog post on how middle-class blacks don't understand that white racism is no longer a problem in black communities.

2. The president is extremely polarizing

President Obama was careful to limit his comments on the Martin story (which were made in direct response to a question from the press, and not, say, prepared remarks) to a personal message of empathy for Martin's parents and a call for everyone to take the situation and the investigation into it seriously.

Naturally, Newt Gingrich immediately called the remarks "disgraceful." This is also around the time that Rush Limbaugh felt free to weigh in, too. Josh Barro noted some of the not particularly enlightened conservative response in his Forbes piece on the right's race problem.

It is a simple fact that when the president takes a position on something, anything, roughly 50 percent of the nation then decides to take the opposite opinion. Once Obama spoke out, caring about Martin became a "Democratic" issue, and Republicans felt not just free but obligated to fling all sorts of shit.

Soon, even Peggy Noonan was weighing in to say that Obama's response was more proof of his arrogance, or whatever. The New York Post's attempt to cover the story insensitively but not too insensitively led to a front page accusing black political leaders (or "race hustlers" in Post parlance) of "hijacking" the tragedy. The real tragedy is that black people and Democrats won't stop talking about Trayvon Martin!

3. The killing was already political.

Often, when people complain about people "politicizing" a tragedy, what they're actually complaining about is people attempting to determine what policies helped lead to the tragedy. In the case of any given incident of gun violence, America's lax restrictions on gun ownership can suddenly seem a bit irresponsible. In the Martin case, liberal journalists noted that Florida had passed "stand your ground" self-defense rules, lobbied for by the NRA and dreamed up by ALEC.

It's unclear whether or not the "stand your ground" law would have any real effect on Zimmerman's hypothetical defense in court, and though it's plausible, we can't know for certain whether the law made him feel emboldened enough to shoot, but it seems self-evident that Florida's "robust" self-defense laws are part of the reason the police never arrested him. Their understanding of the law, correct or no, led them to believe that Zimmerman was immune from prosecution.

Conservatives feared, rightly, that outrage over the killing would lead to some pushback against their largely successful under-the-radar attempts to legislate gun control completely out of existence state by state. Libertarians were first out of the gate on this front, with Reason magazine's contributors pointedly and repeatedly arguing that "stand your ground" laws had nothing to do with the shooting, at all. (This David French post at the Corner suggests that Trayvon Martin was the one legally protected by Florida's laws. Having the law on his side wasn't as useful as having a gun, of course, and if Martin had been armed I suspect the national conversation would be ... very different, right now.)

Part of the frantic defense of Zimmerman is an attempt to ensure that liberals never, ever go back to the gun control advocacy they essentially gave up on after the 1990s.

Of course at the root of the most noxious material from the far right is simple racism -- the sincere belief that if a black kid got shot, he probably had it coming.