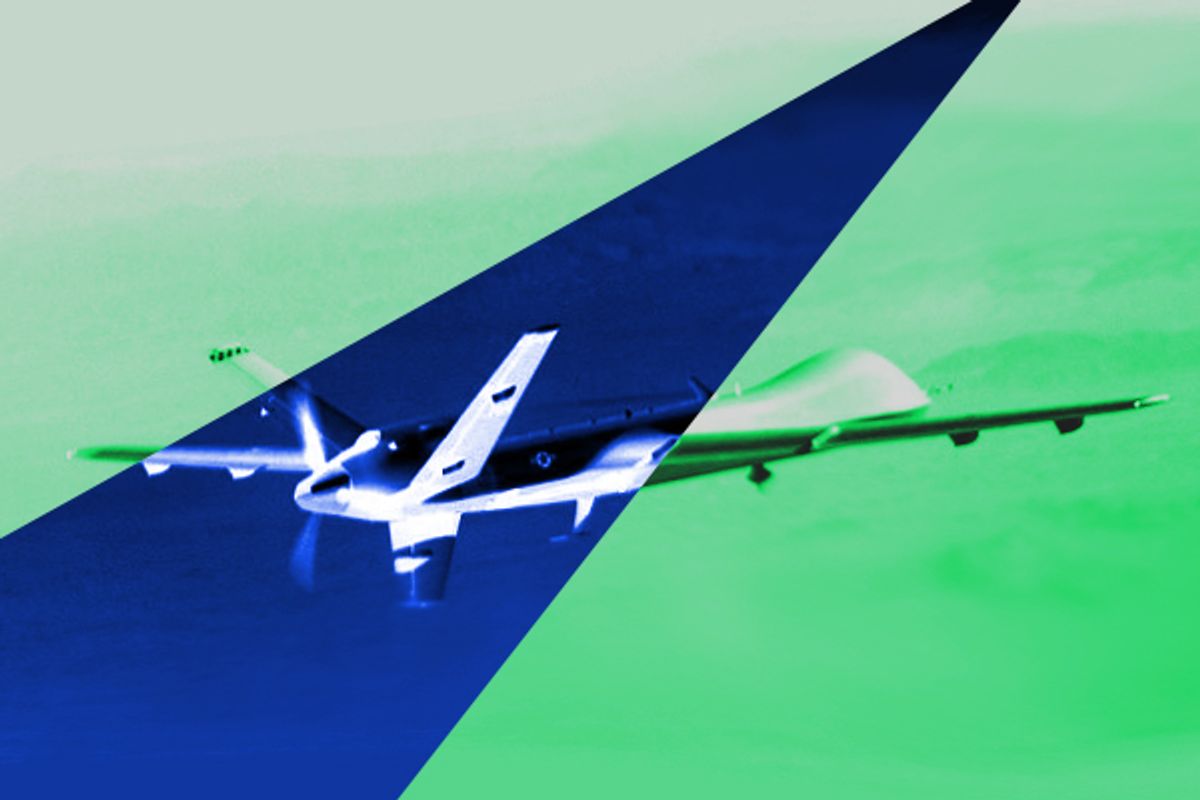 So you want to be a drone pilot? Have a seat in the operator's control station that guides the remotely piloted aircraft. You could be sitting in a trailer on Creech Air Force Base in Nevada or doing your duty at CIA headquarters in Langley, Va. From this perch, you can see a battle space on the other side of the world. You are virtually on the front lines of war.

One of the screens in front of you has a live full-motion video feed from the aircraft (perhaps showing the home of an anti-American sheik and his family in Pakistan or Afghanistan). A second screen has mission data like the altitude of the drone and its fuel level. A third screen displays multilayered menus of more data. You can steer the drone with the joystick in your right hand; the pedals beneath your feet control its rudder. But if you want to turn on the autopilot, it will require 22 keystrokes on one of several available keyboards.

Your partner, the "sensor operator" seated next to you, controls the camera. He or she can zoom in on the face of the man you are hunting. Is this target a danger to the United States? The keyboard in front of you enables you to communicate with a JAG (or a CIA lawyer) to make sure that your target qualifies under the Rules of Engagement. You have audio contact with the Combat Air Command Center in Qatar, which must authorize the firing of missiles. When it does, you push the button on the joystick and send the missile on its way. Then, an explosion. If you want, the sensor operator can train the camera on the wreckage.

If you don't feel comfortable in this seat, you're not alone. When the U.S. Air Force Scientific Advisory Board studied the drone operator control stations last year, it found no less than 17 flaws in the "poorly designed" system, including "poor ergonomics" and ill-conceived input systems, like the autopilot activation. While much of the drone war remains shrouded in official secrecy, the Air Force's ongoing campaign to improve the ground control station provides a window into America's newest way of war. (I found details in a couple of reports at Public Intelligence, a WikiLeaks-type site that publishes closely held government reports.)

The story of the ergonomically correct drone war has two threads: the White House imperative to reduce civilian casualties and the Pentagon's duty to find pilots willing to live with inflicting them. As long as civilian authorities want to mount drone attacks (and the Obama administration has ordered four times as many as the Bush administration), the military must respond. For active-duty military people, the ethical questions are necessarily subordinated to a human engineering challenge. How do you get enlisted people to kill long distance?

The problems with the current operator system is that it was designed for engineers, not pilots, say drone specialists. The original drone was just an aerial surveillance vehicle; missiles were not added until 2001. Then with American forces at war in Iraq and Afghanistan, many commanding officers in difficult situations demanded this efficient new weapon for tracking and eliminating perceived enemies.

"There was a lot of time pressure to get them on the theater," says George B. Harrison,  a retired general and consultant to the Air Force Scientific Advisory Board. Harrison said the current operating system is "usable" and its deficiencies correctable. "Considerable research and a lot of effort is going into designing a more human-friendly control station."

"It can be very confusing for the operators," admits Missy Cummings, a professor at MIT who also serves on the AFSAB. "Things haven't been optimized.  It’s a system problem across all operating stations."

Finding people to pilot the drones has proved unexpectedly difficult. The ground control station had many flaws that required work-arounds, such as accessing fuel gauge information and creating more work space. Accidents were common. One pilot mistook the "kill engine" button for the adjacent landing gear switch, resulting in the crash of a $4.5 million Predator drone.  The pilots of traditional manned vehicles who moved in remotely piloted aircraft did not always make the best drone operators. A lot of people dropped out of the program and retention was low.

There are reports of post-traumatic stress disorder and many more of sheer boredom.

"Now you sit in a trailer, for most missions nothing happens," says Cummings, a former pilot. "Your plane orbits in the sky, you watch and you wait. For the everyday mission, it's very boring. I'd much rather be flying an F-16."

And then boredom is punctuated by terror — and deadly mistakes. The exact death toll is much disputed. The New Jersey-based Long War Journal says 138 civilians have been killed in drone strikes in the last eight years. The London-based Bureau of Investigative Journalism counters that the strikes have killed anywhere from 479 to 811 noncombatants in that period, including 174 children. (Long War Journal's methodology described here; BIJ's here.)

By another metric, the New American Foundation estimates, based on news reports, that 17 percent of the Pakistanis killed in U.S. drone strikes between 2004 and 2011 were civilians; in 2011 the figure was 11 percent. The Air Force does not release statistics on the subject but the science board's report cited an internal estimate that suggested U.S. drone strikes accounted for 8 percent of all civilian casualties in the Afghan theater (compared to 66 percent caused by the Taliban).

The two most common causes of U.S.-inflicted civilian deaths, according to the science board, were the "lack of positive identification" and the "lack of tactical patience."

On the first problem, technological improvements should help, say drone specialists. By bringing together more feeds of accurate intelligence into the control station, the pilots should be able to more precisely identify an armed enemy with higher-resolution photography and greater access to databases.

The second common cause of civilian deaths, the "lack of tactical patience," is not a problem that can be solved technologically. That is a matter of training American soldiers to live in a surreal moral universe.

"You shoot a missile, you kill a handful of people," says Cummings, a former pilot, "and then, this is what is strange, you go home. Your shift is over. You get in your car and drive 30 minutes  to the northern suburbs of Las Vegas and you mow the lawn, talk to your kids, you go to church."

"When I was a pilot and you came back from a mission you would come back to the carrier to be with people who were doing the same thing you were doing. You were all together in it. On your own, it's harder to keep it in perspective."

Cummings said, "We don't know if PTSD is more common among drone pilots than among aircraft pilots. It's just different."

The promise and limits of technology

The issue is not trivial. Some legal authorities argue drone pilots could be charged with war crimes in the future. All the while, the drone war continues to escalate. According to a May 2010 report from the Human Performance Wing  of the Air Force, the number of operator control stations in use is expected to double from 64 in 2010 to 168 by the end of 2012. The new stations will have a number of significant modifications including a more comfortable seat, unified screen, upgraded throttle and improved pedals.

The science board hopes that improved technology will mean that fewer noncombatants get killed.

Increased connectivity of split remote operations results in more “eyes on target” in the CONUS [continental U.S.] ground stations and more opportunities for data fusion from available feeds. Increased sensor fidelity can enhance positive identification, the lack of which is a key cause of civilian casualties. Finally, the employment of low collateral damage/directed lethality munitions on RPAs can help limit civilian casualties.

But there is no technological cure yet for "the lack of tactical patience." New York University law professor and special United Nations reporter Philip Alston has warned about the risk of a "PlayStation mentality toward killing" among drone pilots. In any case, the most careful pilot must respond to orders from higher civilian and military authorities who want to kill for reasons of policy: to protect Americans from imminent threat or preempt more distant threats, they say.

Combat theaters previously had more tolerance for collateral damage, gaining military advantage by easing flight rulesets. Today, the increased concern over collateral casualties among the civilian population and the ability to target individuals instead of areas, has led to a more stringently applied control.

Civilian casualties are the subject of heated debate across the State Department, Pentagon and CIA. You might not see it on cable-news talk shows but there are military people on both sides. Dennis Blair, retired admiral and former chief of national intelligence, is perhaps the most forceful military critic of the drone war. The ultimate arbiter of this debate, of course, is the commander in chief. As Glenn Greenwald points out, President Obama is touting his aggressive national security policy measures on the campaign trail even as he seeks to shield them from court review.

And the same obvious questions go unanswered. What sort of imminent threat did these unnamed Uzbeks and Yemenis pose to the people of the United States? What were they planning to do to you or your neighbor that merited their taxpayer-funded deaths? The drone pilots who pushed the lethal button probably know -- but they cannot say.