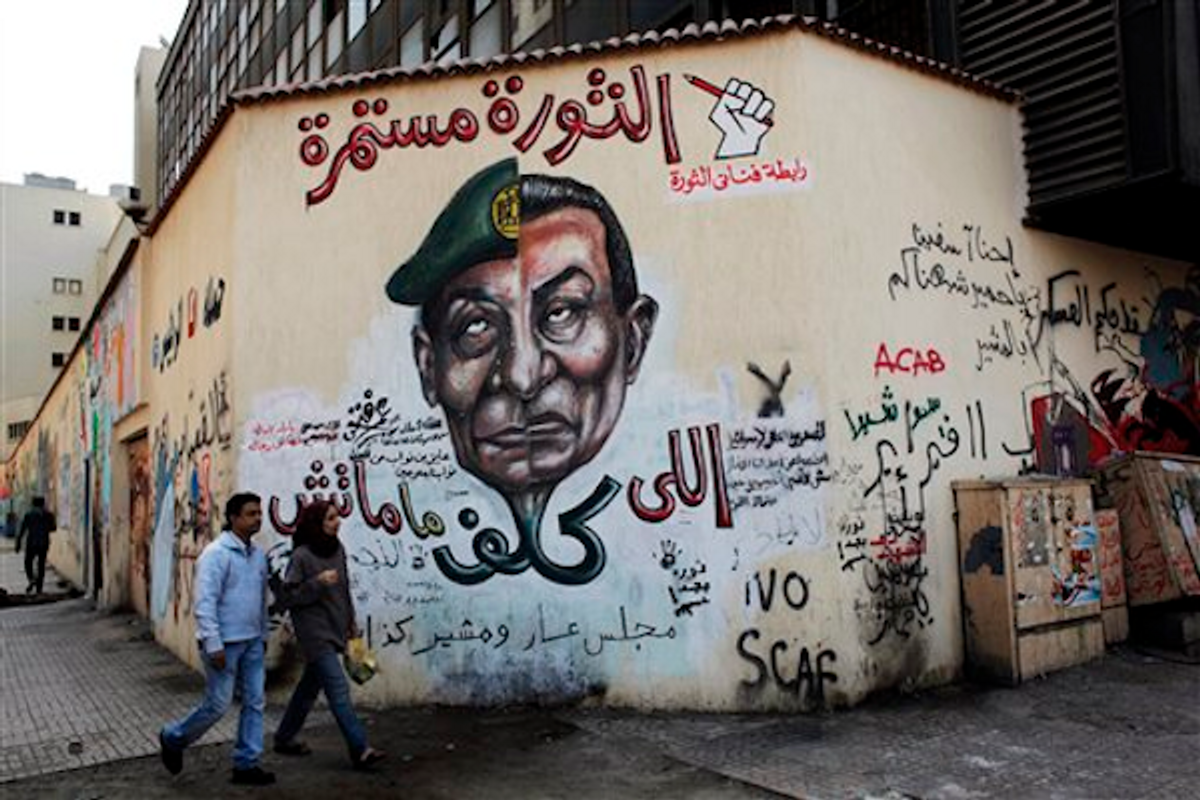 In this Thursday, March 22, 2012 photo, an Egyptian couple walks past a mural depicting military ruler Field Marshal Hussein Tantawi, on the left side of the face and ousted president Hosni Mubarak, right side, in Cairo, Egypt (AP Photo/Nasser Nasser)
--

CAIRO, Egypt — The Muslim Brotherhood is mobilizing a more formidable challenge to the privileged status of the country’s military rulers, particularly in the realm of the army’s mammoth, but largely secret, business holdings.

The Brotherhood’s Freedom and Justice Party, which already holds a majority in parliament, continued to solidify its political power last week when it announced that Khairet Al Shater, the group’s former deputy chair, will run for president on the party’s ticket.

The nomination followed weeks of barbs over the extent of parliament’s power, between the party and Egypt’s ruling generals, known as the Supreme Council of Armed Forces (SCAF).

Leading members of the Freedom and Justice Party, or FJP, said last week they would press the military to be more transparent in its financial dealings. The extent of the military’s business interests is largely unknown.

But analysts say it ranges from tourist resorts to processed food to the manufacture of weapons and household appliances. They say the military makes a windfall on everything from bottled water and olive oil to computer chips and cotton underwear.

“The army must be made aware that there was a revolution, and that things have to and will change,” said Karim Radwan, a member of the FJP’s executive committee in Cairo. “The army must go back to its normal role as defender of the nation, and it should not have this kind of economic control. It should not be a state within a state.”

Crafted over the years to keep Egypt’s swollen ranks both buoyant and loyal, the army’s far-reaching economic empire accounts for between 5 and 40 percent of the country’s economy. It is kept largely secret and is closely guarded by the officers and generals who benefit from its profits.

In a rare admission to the existence of such holdings, SCAF’s chief financial officer, Maj. Gen. Mahmoud Nasr, recently told Egyptian news outlet Ahram Online that “the armed forces will fight to defend” their projects.

“We have been building them for 33 years,” he said. “And we won’t give them to anyone else to destroy.”

Ahmed Al Nahhas, a long-time Brotherhood activist and member of the FJP’s executive committee in Alexandria, said a parliamentary committee has already been formed to investigate and negotiate oversight of the army’s budget and earnings.

“SCAF does not want to be questioned. They are accustomed to the old way of doing things,” Al Nahhas told GlobalPost. “But there will be a new constitution and there must be greater transparency in the army’s dealings. If the Egyptian people accepted the situation before, they will tolerate it no longer. Everything should be made public.”

The army’s defenders say the military maintains small investments through the Ministry of Military Production, related mostly to the military’s need to provide food, equipment and entertainment for its rank-and-file. They say the businesses are largely in the interest of self-sufficiency.

“They have investments in clubs and hotels for army personnel, but nobody puts this money in their own pockets,” said retired Maj. Gen. Mohamed Kadry Said, now a military analyst at Al Ahram Center for Political and Strategic Studies in Cairo. “The foreign media deals with this assumption that the army has some great, big secret piggy bank that is not subject to taxation or to questioning, which is just not true.”

But other analysts paint a decidedly different picture. They say a powerful military — with special privileges, state subsidies and tax exemptions — has morphed itself into a transnational conglomerate with stakes in industries worldwide, including US companies and with a near-monopoly on access to capital.

In December, the military loaned Egypt’s government $1 billion to boost its tumbling foreign currency reserves, offering a window into the size of its financial prowess.

“Egypt’s army is self-sufficient in the way that Chase Bank is self-sufficient, or Apple or Exxon-Mobil is self-sufficient,” said Joshua Stacher, professor of Egyptian politics at Ohio State University and author the report, “Egypt’s Generals and Transnational Capital,” published by the Middle East Research and Information Project earlier this year.

“The whole discourse that the army are purveyors of state capitalism, it’s not accurate,” Stacher said. “The military is incredibly neoliberal. But they control access to capital; they are the gatekeepers of capital. And this is what makes them extremely powerful.”

Gamal Mubarak, the son of ousted President Hosni Mubarak who sat at the center of the former regime’s economic liberalization project, privatized sectors that ran perilously close to the army’s own assets, creating tension between a government that was more tolerated by the army than supported by it.

In the end, the army sided with protesters during the uprising last year. Now Gamal and his capitalist cronies are almost all on trial for profiteering. As a result, the army has now eliminated most of its economic competitors, Stacher said.

With those tensions between Gamal and the army as a precedent, the FJP faces an uphill battle in bringing the army’s earnings under civilian control, particularly as political friction between the two intensifies.

“Change won’t come easily to Egypt. We have been ruled by the army since 1952,” FJP’s Radwan said. “But in order for us to become a real civil state, all things must change. The parliament insists the budget be made public.”

Stacher says the Brotherhood just isn’t strong enough to take on the military’s economic reach. It’s more likely, he said, that the army would placate the movement by bringing them into the fray.

“The military has such incredible access to potential patronage, it can co-opt the Brotherhood,” Stacher said. “If you want to be as realist as possible, they don’t have the money or the weaponry to compete. The Brotherhood can shut up and take the benefits.”