Judges on the right and left legislate from the bench. So why don\'t we just elect them? 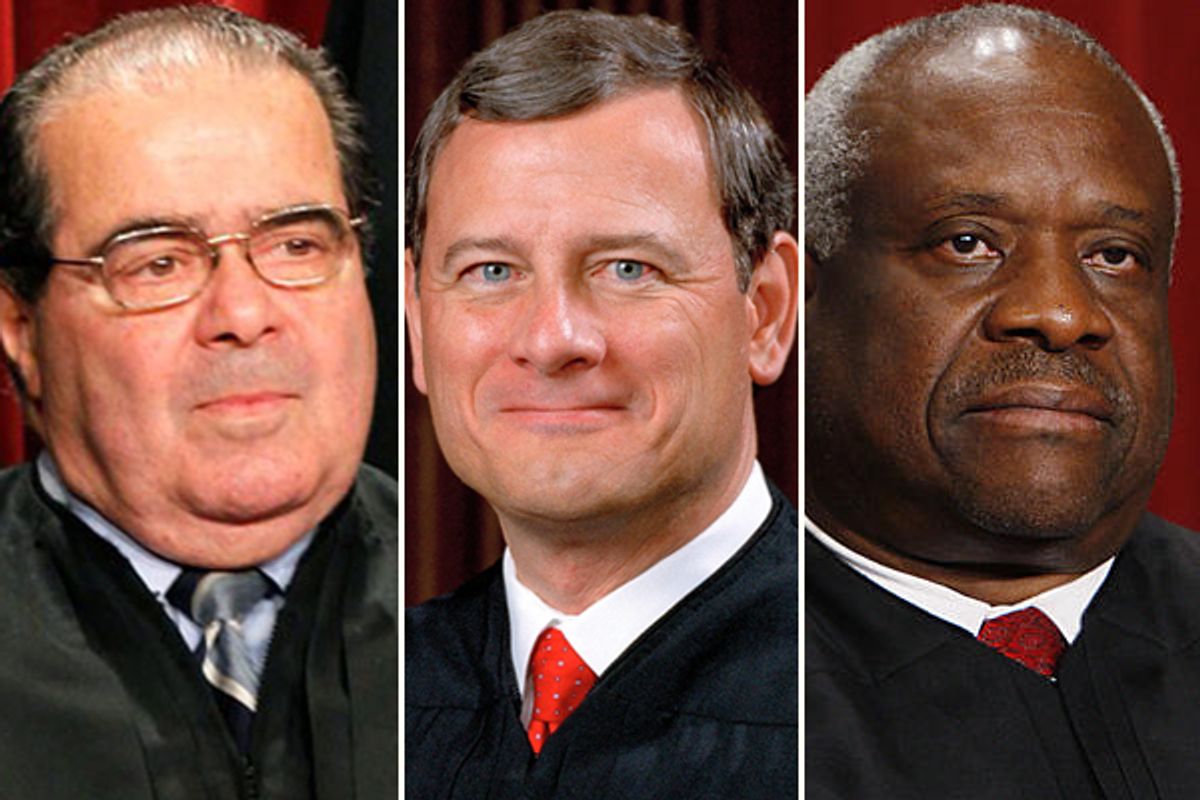 On Monday, we had another example of the Supreme Court’s ideological division: a 5-4 ruling, along partisan lines, giving police the right to conduct strip searches for any offense. This came on the heels of last week’s oral arguments before the Supreme Court about the constitutionality of the individual mandate provision of the Affordable Care Act, which led many observers to predict that the nation’s highest judicial body will strike down part or all of the controversial healthcare reform package. But the hearings were instructive in other ways. They showed once again that political partisanship is closely correlated to a justice’s view of the law. And they proved that the Supreme Court once again is functioning, not as a court, but as a third house of the federal legislature.

The U.S. Constitution, like many state constitutions, really is two constitutions in one. There is the black-letter constitution, which consists of rules about which there is little or no dispute. Most of these have to do with qualifications for representatives, like Article I, Section 3, Clause 1, as amended: “The Senate of the United States shall be composed of two Senators from each State, for six Years; and each Senator shall have one Vote.” Not a whole lot of room for interpretation there.

The other constitution, embedded in the same document, is the Blank Constitution. It is not so much a limit on power as an assignment of the power to fill in blanks left in the text, like the Eighth Amendment’s prohibition of “cruel and unusual punishment.” The need to fill in the blank is admitted even by champions of the “original intent theory,” who must dig up historical evidence of what the drafters and ratifiers might have thought was cruel and unusual punishment at the time of the Constitution’s adoption. The answer is not contained in the text.

Even the basic definitions of powers assigned to different branches of government are blanks that must be filled in. The basic issue in the case of the Affordable Care Act is whether Congress had the power to compel individuals to purchase private health insurance, under the Commerce Clause and the Necessary and Proper Clause of the Constitution. Article I, Section 8, Clause 3 of the Constitution gives Congress the power “to regulate Commerce with foreign Nations, and among the several States, and with the Indian Tribes.” Article I, Section 8, Clause 18 gives Congress the power “to make all Laws which shall be necessary and proper for carrying into Execution the foregoing Powers, and all other Powers vested by this Constitution in the Government of the United States, or in any Department or Officer thereof.”

There is therefore no escaping acts of interpretation that are really acts of legislation: filling in the blanks in the text of the Constitution. The only real question, therefore, is how much latitude the federal judiciary should give Congress when Congress fills in the blanks by passing laws.

The Whig Party between the 1830s and the 1860s thought that the federal judiciary should defer to Congress. The Whigs favored a strong, competent federal government and opposed restrictions on federal power in the name of the states. Opposed to the administration of Andrew Jackson, the Whig Party also wanted the powers of the presidency strictly limited. In the Whig view, the federal judiciary should defend congressional power against encroachments by the states and the executive branch, while deferring to the decisions of Congress on matters of federal legislation.

The Whig theory of the Constitution strikes me as a pretty good one. But it rules out judicial activism, which has been embraced at different times by different factions in American politics. Between the Civil War and the New Deal, a pro-business federal judiciary persecuted unions and struck down federal, state and local restraints on corporations. In the civil rights era, liberal federal judges went beyond striking down racist laws to discovering a “right to privacy” in the Constitution that has been used to eliminate or restrict laws against abortion and homosexuality. Whatever you think about the outcomes of these cases, it is clear that the courts in all of them were just making things up.

In the case of the “right to privacy” they weren’t even filling in a blank in the Constitution, because the term does not exist in the text. In Griswold v. Connecticut, the 1965 case on which all subsequent federal law involving sex and reproductive rights including Roe v. Wade has been built, Justice William O. Douglas wrote that while the Constitution said nothing about contraceptives the “specific guarantees in the Bill of Rights have penumbras, formed by emanations from those guarantees that help give them life and substance.” The right to privacy is a penumbra from an emanation — in other words, it is whatever a majority of the Supreme Court says it is at any given moment.

Economic policy, too, is best carried out at the federal level in a nation with a continental market. The Balkanization of the U.S. economy into 50 separate state economies by state regulations — even good regulations — is something that should be avoided. And as corrupt and partisan as it is, Congress is better equipped to make public policy than judges.

But wouldn’t judicial deference toward Congress and a broad interpretation of congressional power run the risk of majoritarian tyranny over minorities at the national level? The historical record suggests otherwise. The Supreme Court has almost never been ahead of the political branches when it comes to minority rights or individual freedom. The Court intervened in Brown v. Board only when the civil rights revolution was well underway in the streets and in legislatures, and it intervened in Roe v. Wade and recent gay rights cases only when waves of reform were making progress in federal, state and local legislatures. The federal judiciary has often run out with its surfboard to ride a wave of liberation, but it has never caused the wave. Indeed, in the last half-century the same reforms — anti-racism, the liberalization of abortion laws and the rise of gay rights — have taken place at roughly the same time in all advanced industrial democracies, including Britain, which has no written constitution at all.

When they try to fill in the blanks in the Constitution themselves, instead of letting Congress do the job, federal judges cease to be judges and start acting as legislators — incompetent legislators, like the Supreme Court justices who wrestled with issues like adverse selection in insurance policies in last week’s hearings. A number of state constitutions provide for the direct election of state Supreme Court justices by the people. Perhaps the federal Constitution should be amended along similar lines. Why not? If our laws are to be made by a tricameral federal legislature with three branches of the legislature — the House, the Senate and the Supreme Court — we the people might as well be empowered to elect the lawmakers in all three.