As evidence of bad bank behavior grows, the GOP candidate continues to absolve them of blame 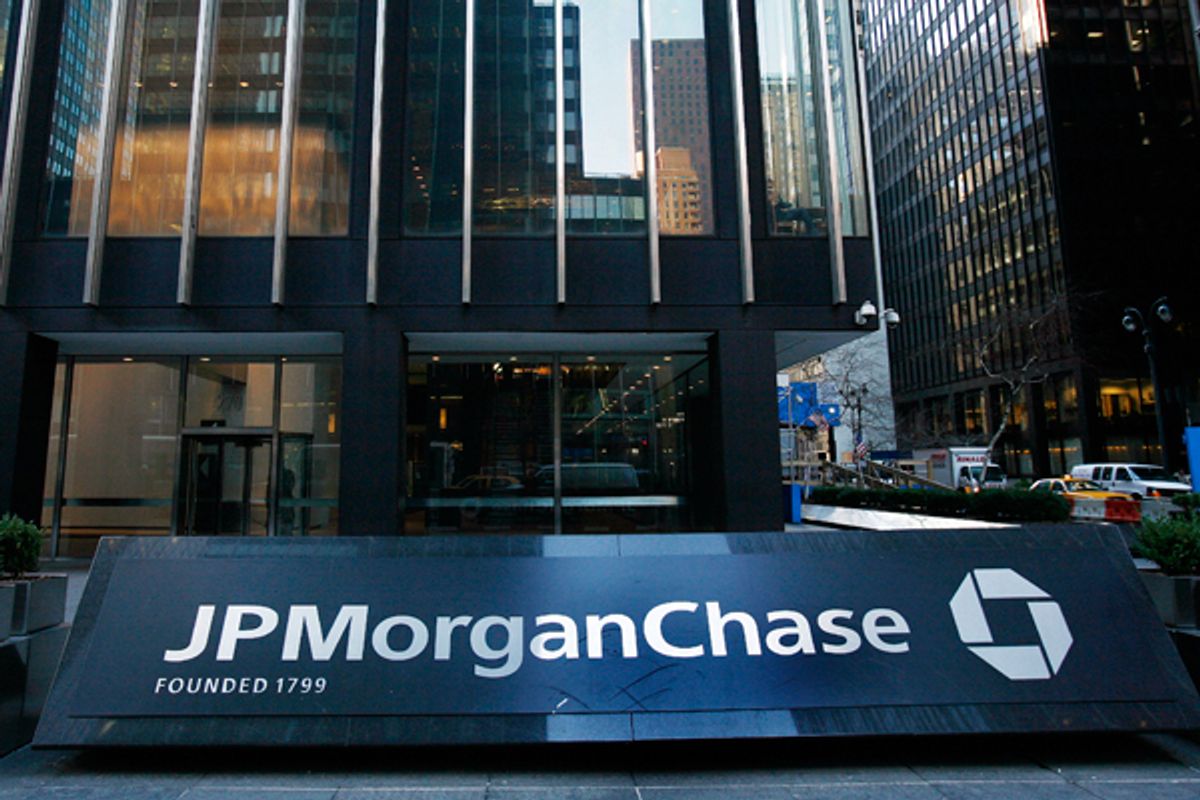 In a rare interview published Tuesday, Mitt Romney told American Enterprise blogger James Pethokoukis that he was opposed to breaking up the big banks.

"I’m not looking to break apart financial institutions," he said, while absolving the banks from responsibility for the financial crash. "I think what caused the last collapse was a convergence, almost akin to a perfect storm, of many elements in our economy and regulatory structure."

And so, on a day when primary voters in Wisconsin, Maryland and the District of Columbia seem likely to consolidate Romney's hold on the GOP presidential nomination, the former governor of Massachusetts once again made clear to the general public why he does not understand the passions of the moment. Americans -- of any political stripe -- do not want to hear why the banks were not responsible for the crisis. They're still angry, and with good reason.

The series is "infuriating," writes Nocera, and it's hard to disagree. The big banks, with starring roles played by JP Morgan Chase and Bank of America, have been playing exactly the same games with credit card debt collection as they did with foreclosures. Chase's record is particularly horrible: It sued delinquent customers without proper documentation, robo-signed legal affidavits without checking to see that the facts attested to were actually correct, and fired employees who dared question the bank's behavior.

Americans are angry at banks because even after Wall Street's largest financial institutions played a leading role in crashing the economy, they continued to add insult to injury by improperly foreclosing on homeowners who were current on their mortgages and sending debt collection agencies after people who had already made arrangements to settle their bills. Any politician who doesn't understand the sense of aggrievement so many people feel -- and until recently, President Obama was doing his best effort to convince Americans that he didn't either -- is completely misjudging the mood of the electorate as November approaches. Plug into this equation the fact that 93 percent of the new wealth generated in 2010 went to the top 1 percent of the population, while the adjusted gross income for the bottom 90 percent actually fell, and you have all the evidence you need to understand why people are infuriated.

What neither Nocera nor the American Banker series mentions, however, is how the bad behavior -- both in debt collection and foreclosure -- is an almost inevitable consequence of size. When you have millions of credit card holders on your books, it's easy not to pay attention to individual details and just treat them all as one big revenue stream to be maximized, by any means necessary. The consequence of the massive consolidation of retail banking in the hands of just four or five institutions makes it logistically impossible to treat every customer with care and diligence. It would have cost Bank of America too much money to figure out exactly how much each delinquent credit card customer really owed, so, instead, the bank just sold all its debts to a third-party debt buyer. When you outsource debt collection without providing documentation of the debts -- or, in many cases, declaring explicitly that there is no documentation! -- you guarantee abuses.

When Romney tells conservative bloggers that he has no plans to break up financial institutions, he makes Wall Street very happy. But making Wall Street happy is not what this election is going to be about. The fact that Romney does not appear to understand that fact in the least is one of the enduring mysteries of his candidacy.