From a damning documentary to a federal investigation, the arch-conservative brothers find themselves in hot water 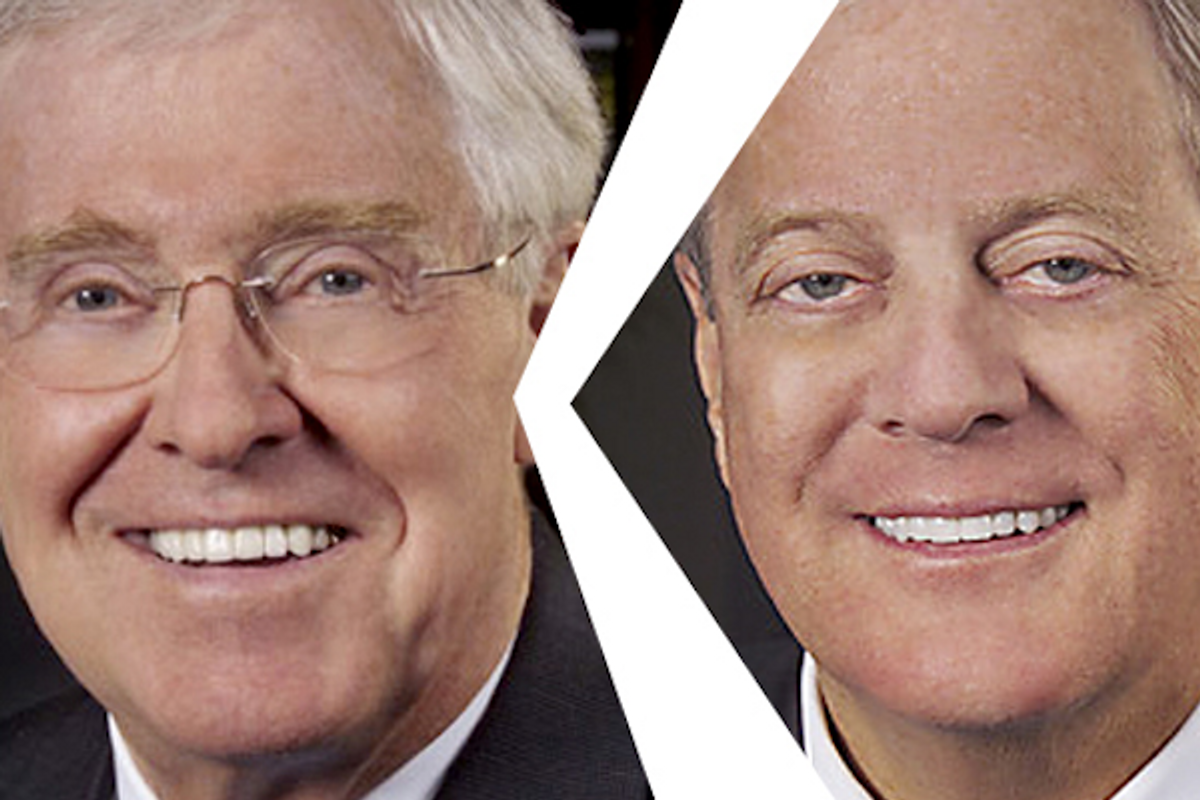 Were there a way for a few billion clams to wipe a week off the calendar, one imagines that Charles and David Koch, the multibillionaire principals of Koch Industries, would like to see the final week of March 2012 vaporized, at least in the public mind. For the Kochs, it was a week of bad news: a new documentary about their political activity and corporate negligence was making a splash -- on the same day a story broke announcing an FBI investigation of two Wisconsin groups tied to Americans for Prosperity, the political ground organization they founded and fund. (Full disclosure: AlterNet is a supporter of the documentary, "Koch Brothers Exposed," and I appear in the film.)

Things got even worse the next day, Friday, March 30, when the billionaire brothers learned that a federal court handed down a decision that may ultimately require certain nonprofit groups, such as Americans for Prosperity, to reveal their full donor list, and the New Yorker's Jane Mayer, who wrote a devastating profile of the brothers last year, reported on the Kochs' involvement in a barrage of anti-Obama ads sponsored by a tax-exempt nonprofit called the American Energy Alliance, which may also now be required to reveal its donor list.

On the very same day, another federal court struck down portions of Wisconsin's controversial law that stripped collective bargaining rights from most of the state's public employees -- a law championed by Americans for Prosperity, and rammed through the state legislature a year ago by the AFP-supported Gov. Scott Walker. Here, we take a closer look at the Kochs' very bad week.

Just hours before the premiere showing of "Koch Brothers Exposed" in Manhattan on Thursday, March 29, the Miwaukee Journal Sentinel's Daniel Bice broke the news that the FBI was investigating possibly illegal activity by two groups led by Mark Block, former director of the AFP Wisconsin chapter, during his stint as campaign manager for former GOP presidential candidate Herman Cain. (The Hermanator famously referred to David Koch as his "brother from another mother" at an event hosted by the oil baron in Washington, D.C., last year.) Among documents Bice uncovered last year was a profit-and-loss statement for Prosperity USA, a nonprofit group headed by Block, which details travel costs for a visit last year with David Koch and Americans for Prosperity president Tim Phillips in Washington, DC.

While that's not proof of wrongdoing, it is proof of David Koch's link to Block, a shady character who has been prosecuted in the past for violating Wisconsin election law.

In correspondence with the Center For Public Integrity's iWatch News last year, AFP spokesperson Levi Russell acknowledged that “there were financial dealings with Prosperity USA and/or the Wisconsin Prosperity Network.”

Already, March 29 was looking like a tough day for the Kochs when Politico's Kenneth P. Vogel burst forth with an article revealing the involvement of the Kochs in an organization, the American Energy Alliance, that launched a multimillion-dollar ad campaign against President Barack Obama on Friday. The ads put forth the specious claim that the president's policies are driving up gasoline prices.

The groups are run by Tom Pyle, a former lobbyist for Koch Industries. Pyle regularly attends the mega-donor summits organized by the Koch brothers, including the 2012 winter summit in Indian Wells, Calif., where the Kochs raised more than $150 million to be directed to groups ahead of the general election.

The ads come after the Kochs’ primary political group, Americans for Prosperity, earlier this year launched a $6 million ad campaign calling out Obama over the now-defunct, government-subsidized maker of solar power components, Solyndra.

The following day, the New Yorker's Jane Mayer followed up with a closer look at the American Energy Alliance:

So who is behind the advertising campaign to push the line that Obama is to blame? Bill Burton, senior strategist at the pro-Obama Super PAC Priorities USA believes that it comes from a familiar source. “The Koch brothers and other oil barons are using profits from high gas prices to fund false political attacks benefitting Governor Romney,” he says.

[American Energy Alliance Communications Director Benjamin] Cole retorts that there is “not a single penny of Koch money” paying for the two-week ad campaign. But he declined to confirm or deny reports, including one by Politico, that the Koch brothers, whose privately owned conglomerate, Koch Industries, is a major domestic-oil refiner, have steered funds to both the American Energy Alliance and the Institute for Energy Research. A spokesperson at Koch Industries did not respond to questions on the Kochs’ ties to the groups.

The Koch brothers are notoriously secretive about where they put their money when it comes to their influence on the political process. Their vehicles of choice are a particular sort of nonprofit organization -- those that fall under either 501(c)(3) or 501(c)(4) of the Internal Revenue Service tax code. Under current Federal Election Commission regulations, organizations sponsoring so-called "issue" ads -- even those with with the (c)(3) or (c)(4) designation -- have not been required to reveal their donors. Americans for Prosperity, the Americans for Prosperity Foundation and the American Energy Alliance all fall under one of these designations. In her report on the anti-Obama ads discussed above, Mayer explains it on the New Yorker's Web site:

Technically, the ads have been produced and aired by the Washington-based American Energy Alliance, a 501c-4 social-welfare organization under the Internal Revenue Service’s tax code, whose activities, under the law, have to be largely non-political. This group shares office space and personnel with a sister organization, the Institute for Energy Research, a 501c-3, whose tax status is typically reserved for charities. Its activities have to be strictly non-partisan and non-political.

Even though the American Energy Alliance and Americans for Prosperity are rather blatantly political in their activities, lax enforcement has allowed the groups to get away with their ads and political rallies while shielding their donors from disclosure.

A decision made on Friday by the U.S. District Court for the District of Columbia could change all that, laying before the eyes of the world the extent of the Koch brothers' spending through such organizations.

Friday's court ruling could reverse a trend started by the FEC rules, and aggravated by the Supreme Court's 2010 Citizens United decision, that led to an explosion in undisclosed contributions to electoral efforts. The percentage of independent spending that went undisclosed jumped from 1 percent in 2006 to 43.8 percent in 2010, according to the Center for Responsive Politics.

Advertisements falling under the rubric of "electioneering communications" include those run against President Barack Obama by the American Energy Alliance and Americans for Prosperity, both non-profits linked to the Koch brothers. All ads run by the U.S. Chamber of Commerce are classified as "electioneering communications." The ruling would require for the first time that contributions to these groups, and many more, be disclosed.

The FEC, whose nondisclosure rules were challenged by Rep. Chris Van Holland, D-Md., could appeal the ruling if four of the six FEC commissioners vote to do so.

4. Recall This: A Legal Defeat for Koch-Funded Wisconsin Gov. Walker

Just as the date was being set for a recall election for Wisconsin Gov. Scott Walker, a federal court struck down portions of the anti-labor law that all but ended collective bargaining for the state's public employees. When first introduced in the state legislature, the anti-union measure sparked an uprising in the Dairy State last year that led to an 18-day occupation of the state capitol building. Walker was elected in 2010 with a substantial assist from the Wisconsin chapter of Americans for Prosperity (then under the leadership of Mark Block, now a person of interest in the aforementioned FBI investigation). Judge William Conley took aim at several portions of the law: those that forbade the automatic deduction of union dues from public employes and demanded yearly union elections. Such provisions treated certain groups of public employees differently from others with similar jobs, apparently according to their loyalty to the governor.

The court ruled that the state cannot prevent public sector unions from automatically deducting dues from workers' paychecks and cannot require them to be recertified annually.

The law, known as Act 10, requires most public sector unions to hold annual votes on whether a majority of its members want to recertify the union. It also took away the rights of some unions to automatically collect dues from members' paychecks.

The court kept most of the law in place, but it ruled that the state did not have the power to pick and choose which unions could deduct dues. Under Act 10, only "public safety unions" -- those representing firefighters and police officers -- could continue to take out payments automatically.

The ruling by U.S. District Court Judge William Conley, which struck down those sections of the law, held that the legislature had the right to deny union bargaining rights, so long as that policy was applied evenly across all state employee unions--not just the ones opposing the governor's or his party's policies. In Act 10, Walker generally exempted state police and public safety unions from the bargaining and dues-collecting restrictions.

If you're trying to keep a secret -- say, one about the amount of money you're investing in organizations that put out disinformation in order to sway the political process in your favor, or maybe one about the cancer affecting nearly every family in a neighborhood downriver from your paper plant -- a documentary raising questions about these things is never a good day. On Thursday, March 29, filmmaker Robert Greenwald unveiled a feature-length film, "Koch Brothers Exposed," at a screening co-sponsored by AlterNet and Greenwald's Brave New Foundation.

But given all the other fires that had popped up in Kochland -- the court ruling against Scott Walker, the FBI investigation of Mark Block, the Politico report on the Kochs' support of the American Energy Alliance, and the New Yorker's exploration of the Alliance's Koch links -- you'd expect that public relations wizards for the Kochs and their proxies would be falling all over themselves issuing statements and doing spin-control on these developments. Instead, radio silence:

A spokesman for the Koch brothers did not immediately respond to requests for comment Thursday.

From the New Yorker:

A spokesperson at Koch Industries did not respond to questions on the Kochs’ ties to the groups.

The Kochs' political operatives were hardly more responsive. From the Milwaukee Journal Sentinel, in its report on the FBI investigation that involves the Kochs' Americans for Prosperity:

Block did not return texts, emails or calls asking for comment on Thursday.

From the Huffington Post, in its report on the court decision against parts of the Scott Walker anti-union law:

Walker's office did not return a request for comment.

Instead, the PR professionals at Koch Industries focused on filmmaker Greenwald, posting an attack on him on their Web site, and complaining of "harassing phone calls" from Brave New Foundation staffers who were requesting comment on the documentary, and making a big deal of a bad joke made by one of the staffers after he thought he had hung up. When a behemoth corporation -- in this case, the second-largest privately held corporation in America -- uses its corporate Web site to attack an individual the way Koch Industries went after Greenwald on Friday, there's usually a bit more to the story. In this case, it appears the public relations geniuses at Koch were hoping to deflect attention away from the Kochs' very bad week.