Mitt Romney's fooling himself about women

He thinks his "real views" will woo them, but nobody trusts a guy who'll say whatever it takes to get what he wants 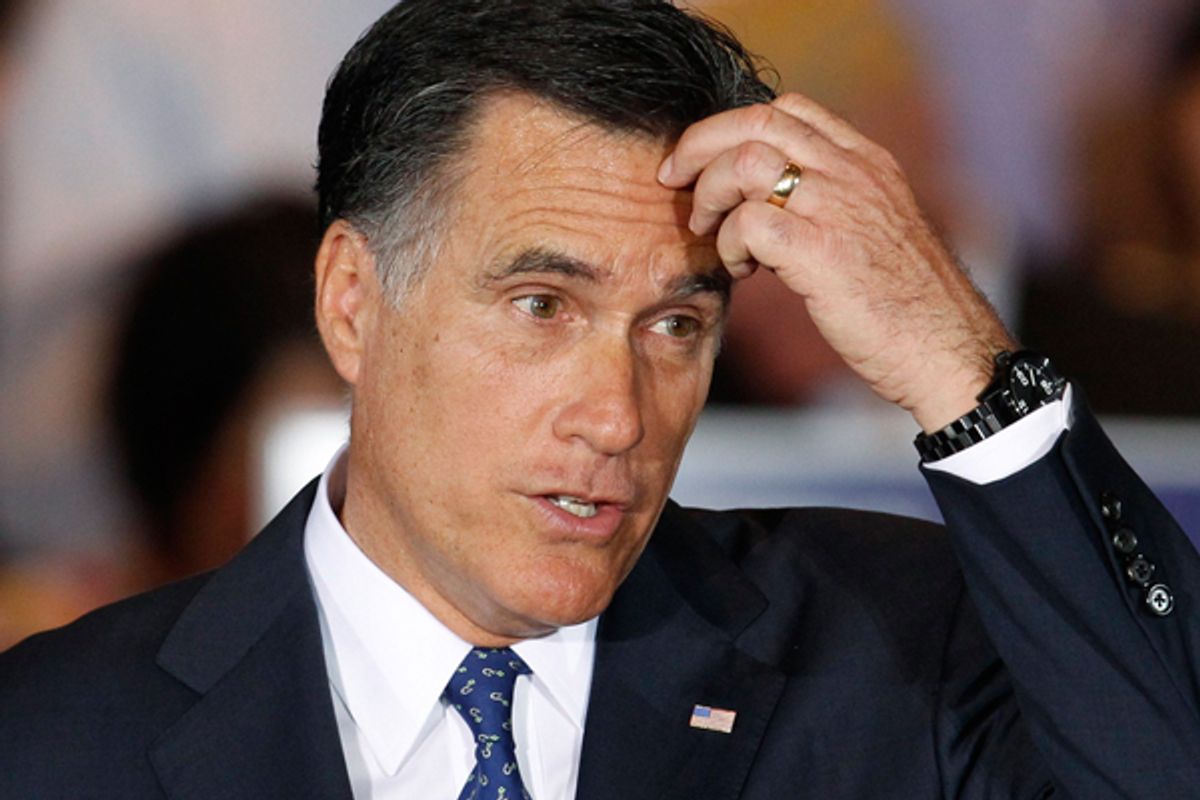 Everyone practices a little bit of self-delusion, every once in a while, when it comes to the opposite sex. But Mitt Romney and the folks around him are living in a dream world when it comes to women. Clearly female voters are just not that into Romney – and his troubles get worse by the day.

It's not that Romney's backers don't see the problem. Former Maryland Gov. Bob Ehrlich counsels patience: Women will warm to Romney once they know his "real views" on the issues. This comes just after Ann Romney quipped, "I guess we better unzip him and let the real Mitt Romney out." Note to Romney team: Having "supporters" continue to suggest that we don't yet know Romney's "real views," with or without Etch A Sketch metaphors (or icky zipper imagery), isn't helping your guy, with anyone.

Female Romney surrogates like South Carolina Gov. Nikki Haley and New Hampshire Sen. Kelly Ayotte are specifically trying to minimize the role the damaging birth control battle will play among women in November. "Women don't care about contraception," Haley insisted, a little bit delusionally, on Tuesday, while Ayotte insisted Romney will be fine in November because  "women voters very much care about the state of the economy."

Let me concede something to Romney's defenders: His troubles with women aren't mainly about contraception. They're mainly about Romney.

The latest Gallup poll shows how bad things have gotten for the former Massachusetts moderate. He now trails President Obama in 12 swing states, largely because of the defection of independent women. Female independents now back Obama 51 to 37 percent – and that's a 19-point swing just since the end of 2011, when they preferred Romney. But here's a little data point for Haley: Only two in 10 independent women polled by Gallup even knew Romney's stance on contraception. Those who did disagreed with Romney 2-1. More independent women – four in 10 – knew Obama's contraception position, and they were divided about evenly. Still, 60 percent didn't know either candidate's stance. That suggests contraception matters, but it's not the only thing  driving independent women away from Romney and the GOP. But that's not good news for Republicans, either.

Ayotte is right: Women care about the economy. And that’s hurting Romney in two ways. First, the economy is getting better, which always helps the incumbent, with both genders. But also, women have been more reliable Democratic voters since the age of Ronald Reagan largely because they support safety net programs and they dislike candidates who pledge to eviscerate them. Paul Ryan's budget, which Romney thinks is "marvelous," shreds the safety net into lint, and it will turn off at least as many women as the GOP's contraception policies.

Bob Ehrlich may be correct; women might like Romney better if they knew his "real views." If he has any. The man who once supported abortion rights because a relative died of a botched illegal abortion, whose wife gave money to Planned Parenthood, and who signed Massachusetts' innovative universal healthcare plan might well have fought Obama among women voters. But that guy is long gone. In his place is a man who will say virtually anything to get elected. Women know that guy, and they don't like him. I'm not sure what Ann Romney sees when she "unzips" her husband, but the man who's running for president is a turn-off.