Crowding the GOP primary with a fiery, populist speech, Obama made the two men running mates – for a day anyway 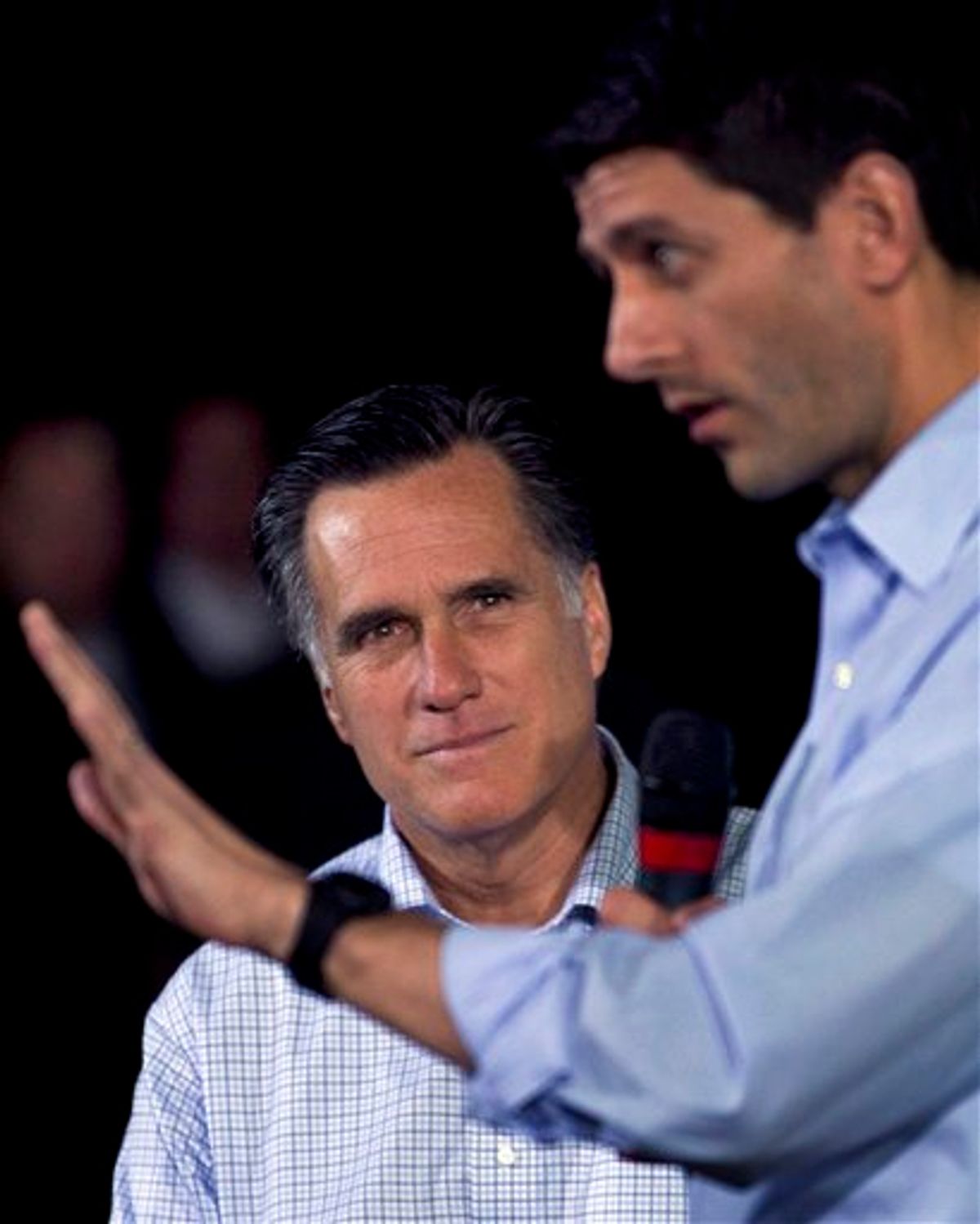 A feisty (and crafty) President Obama blasted the House GOP budget proposed by Rep. Paul Ryan and embraced by Mitt Romney as "social Darwinism" in a news-dominating speech Tuesday – and set the tone for Romney's victory party in Wisconsin that night. Romney also won Maryland and Washington, D.C., but Wisconsin was the only state where Rick Santorum was challenging him, and so it was the only state that mattered.

Ryan wound up front and center at the Wisconsin festivities, introducing Romney's victory speech in Milwaukee. It was a big moment for the rising Wisconsin GOP star, but he kind of botched it. Still smarting from Obama's barbs today – I remember him seething, red-cheeked and sullen, when the president shot back at his budget last year  – he charged that Obama's only reelection plan was "to divide us in order to distract us." Then he harked back to Obama saying he wanted to be "a uniter, not a divider" – but Obama never said that, it was George W. Bush's cliché.

Even Romney seemed a little knocked off his game by Ryan's uneven opening, joking, "He's not going to take Ann's place!" (What?) The victor gave a simplistic Colorforms speech (to continue with the '60s toy metaphors kicked off by the Etch A Sketch gaffe), mixing and matching lines and images from old speeches with new ones. He attacked Obama's community organizing work, insisting it proved that the president turns to government, not business, when times are tough. In fact, Obama worked for a Catholic organizing project – exactly the sort of voluntary religious response to poverty conservatives claim to respect. (It's still stunning how little Republicans have bothered to get to know about Obama's actual history as opposed to the Sarah Palin-Andrew Breitbart cartoon version, isn't it?)

Mainly the speech was a tired reframing of the theme he unveiled last week, accusing the president of wanting to create a "government-centered society," as opposed to the opportunity society he stands for. He borrowed the Jim De Mint analysis, that Obama's out to create a dependent electorate, "willing to vote for anyone who's going to give them more." Will those slackers and moochers on Social Security and Medicare realize Romney's talking about them?

Putting aside the mediocre speechifying by Ryan and Romney, the former Massachusetts governor had a good night, winning all three contests. And in Wisconsin, he showed signs of being able to win over some GOP voters who've proved hostile to him so far. He beat Santorum among non-college grads, and tied with him among voters who made less than $100,000 a year (that's how MSNBC broke it down; I haven't seen data for those who make under $50,000).

For his part, Rick Santorum gave the kind of rambling speech Newt Gingrich has become known for in his waning weeks, though I enjoyed his reference to the "clear, contrasting colors" visible in the campaign. We know he said "blah people," not black people, and he didn't use the N-word in a speech last week (he actually didn't). And I'm sure he meant nothing by his use of "contrasting colors" to describe his race with Obama. But it sure is interesting how often imagery like that just surfaces when Santorum's around.

There was lots of talk about the way Ryan and Romney had bonded all weekend, since Ryan (a little belatedly) endorsed him. Lots of people seemed to see in the political bromance "a running mate is born" kind of moment.  NBC's Chuck Todd referred to "the fascinating ticket preview we got tonight."

I don't see it, yet. Ryan is popular with the party's base, and he also has his admirers among the Beltway Villagers, as a "Serious" young man who's at least trying to craft grand policy visions (even if, as the president says, they reflect a shocking Social Darwinism). But he's prone to sulks as well as gloating. The real issue is going to be whether the state of Wisconsin is in play come the late summer and early fall.

Obama was trailing various GOP candidates badly last year; now he's way ahead of Romney in every poll. That could change, and the success of the movement to recall Gov. Scott Walker could play a big role. If it energizes Democrats, disillusioned independents and even working-class Republicans, then not even Paul Ryan helps Romney carry Wisconsin. I don't think the Tea Partyers having the hots for him would trump the fact that he couldn't help Romney carry his own state.