His rebuff of the Justice Department proves his longtime strategy: Defend himself by attacking his critics 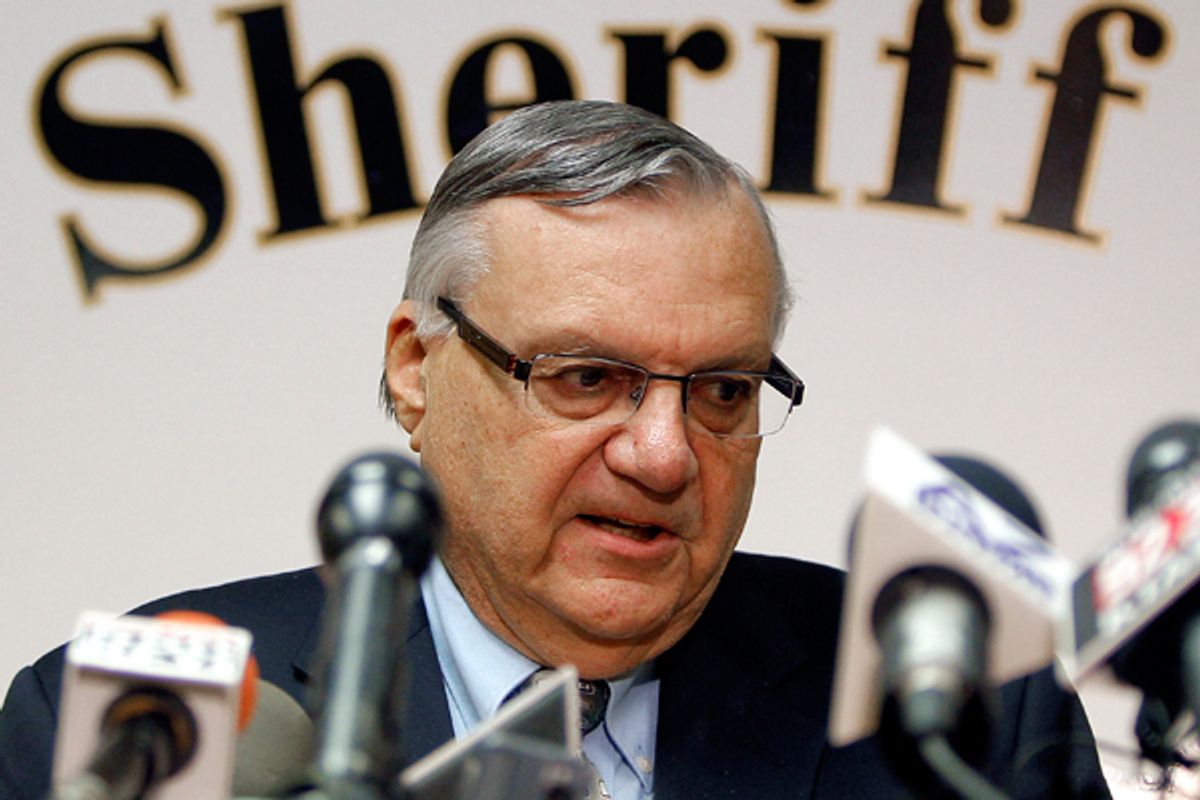 The only thing surprising about Maricopa County Sheriff Joe Arpaio’s pistol-whipping of the U.S. Department of Justice on Tuesday is that anyone is shocked to see him thumbing his nose at the feds.

“This doesn't surprise me at all,” says Alfredo Gutierrez, a former state legislator and longtime Latino civil rights leader in Phoenix. “It shouldn’t surprise anyone who has been following Arpaio over the last 20 years.”

Arpaio announced Tuesday that his office would not accept the federal monitor that the Justice Department demanded as a condition for a settlement regarding allegations of widespread police discrimination against Latinos.

“None of us agreed to allow a federal monitor to come remove my authority as the elected sheriff of Maricopa County," Arpaio said. "I feel that turning my office over to the federal government would be a dereliction of my duty."

The breakdown sets up the likelihood that the Department of Justice will file a lawsuit against MCSO, which Arpaio said on Tuesday he welcomed.

Politically astute and a master of media manipulation, Arpaio never misses an opportunity to dust off his best John Wayne impression and cast himself as the courageous lawman calmly plunging into the firestorm to protect genteel citizens. No stinking judge, flimsy court order or federal bureaucrat is going to stop him from delivering Joe’s Justice.

This bravado has made him a national figure. But something most people don’t realize is how much of Arpaio’s gusto is defensive in nature. He learned long ago the best way to deflect criticism is to launch a criminal investigation of his critics, whether it's the press, political leaders, judges or fellow cops.

He’s initiated criminal investigations against reporters, including this writer. He’s launched investigations into Arizona’s former attorney general, several members of the County Board of Supervisors, a couple of Superior Court judges, and a former Mesa police officer who was his opponent in the 2004 and 2008 elections. Famous for his aggressive prosecution of animal abuse, Arpaio opened a criminal investigation of a Chandler police officer whose dog died after being left accidentally in a car.

There is no limit to who will become a target. In an apparent attempt to deflect a separate, ongoing criminal probe that Arpaio has used his office to retaliate against political rivals, the sheriff is now investigating the legitimacy of President Obama’s birth certificate.

Not everything goes Joe’s way. When pressed against the wall by a steady stream of pesky civil suits alleging wrongful deaths in his jails and other atrocities, such as the worst case of racial profiling in U.S. history, his office simply destroys evidence, even in the face of federal court orders to deliver the goods.

Despite the well-publicized problems engulfing the sheriff’s department, including misspending $100 million and botching scores of sex-crime investigations in Latino neighborhoods, the majority of voters in Maricopa County, which includes Phoenix, simply haven’t cared whether Arpaio abides by the law or even runs a competent department.

The Republican-dominated county loves his brash talk, and so do many independents and even some Democrats. Arpaio’s been elected five times without a serious challenge and is running for his sixth term this fall and is expected to coast to victory in a three-way race.

Encouraged by a fawning and frustrated electorate, Arpaio’s refusal Tuesday to comply with the Justice Department will likely generate even more campaign contributions from across the country. Arpaio has raised $6 million since 2009, with $1.1 million donated in 2011. The vast majority of Arpaio’s 2011 contributions – 80 percent – came from out of state.

Arpaio is claiming the DOJ civil rights allegations are nothing more than election year politics by the Obama administration as it tries to shore up flagging support from Latinos who helped deliver Obama the Oval Office in 2008.

For once, Gutierrez found himself in agreement with Arpaio. Latinos, he said, feel “betrayed” by Obama because he failed to deliver on a campaign promise to pass comprehensive immigration reform and has done little to support passage of the DREAM Act.

“Somebody in the Obama administration read the polls showing declining support from Latinos for Obama, so they finally decided to do something on this,” Gutierrez says. “But these complaints about MCSO have been before the Justice Department for years.”