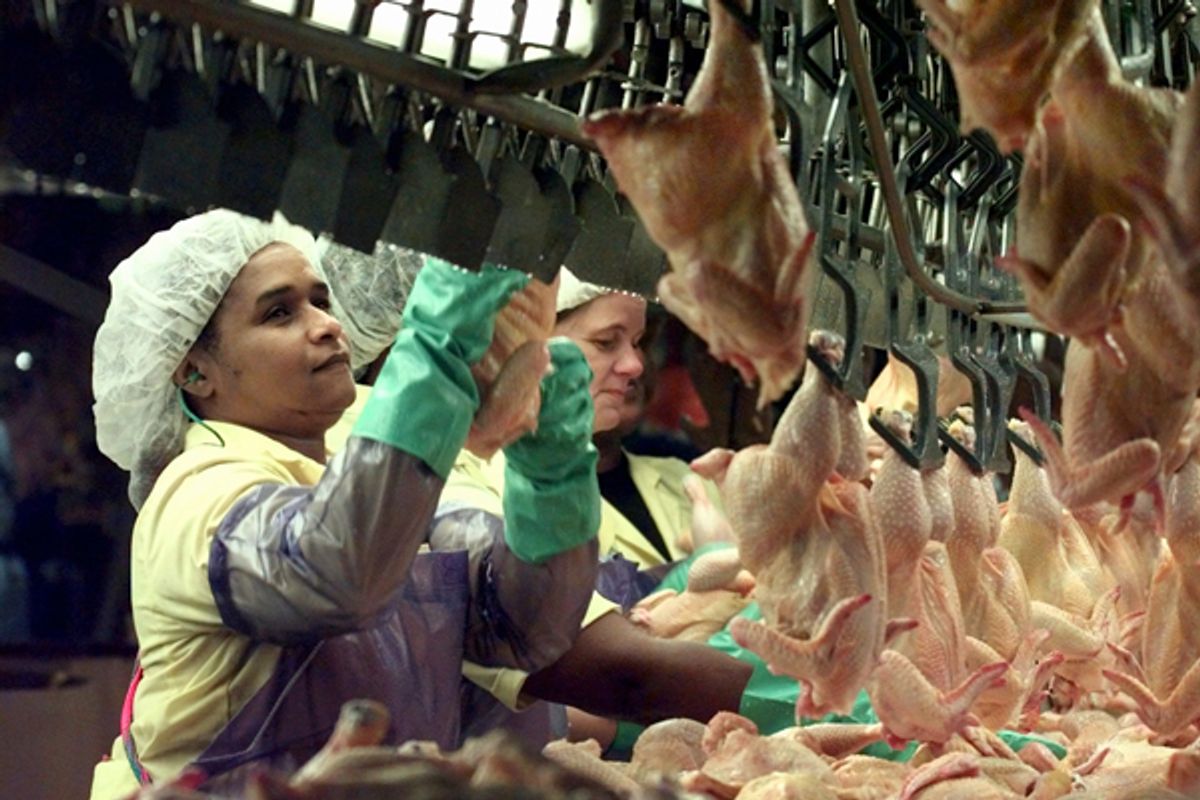 You can’t be outraged by -- or fight back against -- what you don’t know. At least that seems to be the theory behind a spate of new government-backed efforts to help corporations prevent inconvenient information from ever reaching the public domain. In states across the country, as in Washington, D.C., lawmakers are helping companies keep secrets in everything from factory farming to fossil fuel exploration to home foreclosures.

In five states, for instance, so-called Ag Gag laws are now on the books. Iowa just passed legislation that "criminalizes investigative journalists and animal protection advocates who take entry-level jobs at factory farms in order to document the rampant food safety and animal welfare abuses within," according to the Atlantic's Cody Carlson.

The impetus for such laws is obvious: After a series of damning videos of factory farms abusing animals, Big Ag faced a consumer backlash. But rather than make its facilities more humane, it has opted to spend its cash on lobbyists and court cases aimed at preventing the public from ever seeing the atrocities in the first place. Accomplishing that means pioneering new legal theories that threaten to set dangerous new precedents curtailing some of the most basic First Amendment freedoms we take for granted.

Over in the world of energy, it's much the same thing. Last month in Pennsylvania, the oil and gas industry successfully lobbied state legislators to ban physicians from telling patients what toxic fracking chemicals they may have been exposed to. As Mother Jones' Kate Sheppard reports, "While companies must disclose the identity and amount of any chemicals used in fracking fluids to any health professional that requests that information ... the new bill requires those health professionals to sign a confidentiality agreement stating that they will not disclose that information to anyone else -- not even the person they’re trying to treat."

At least doctors in Pennsylvania get to see some basic information about the industry's toxic brew, which is more than health professionals in other states have been able to say in recent years. Indeed, in 2008, an emergency room nurse nearly died after being exposed to a company's fracking chemicals and, according to High Country News, the company cited a trade secrets law in "refus(ing) to provide more specific information (about the chemicals) to the hospital once she fell ill." That left her "intensive-care doctor to guess what to do as he tried to keep her alive." This possibility still exists in states that still do not fully mandate disclosure of fracking chemicals.

In the housing sector, you probably assume you at least have a right to see relevant documents related to your imminent home foreclosure. After all, with that basic information, you might stand a chance of going to court and preventing a bank from illegally throwing you out of your home. Yet, if you live in Colorado, your assumption about being able to see such information would be wrong.

With details of the financial industry's document shredding and robo-signing scandals still leaking out, the Denver Post reports that Republicans in the Legislature there voted down a bill simply "requiring that lenders prove their right to foreclose on a home." That means Colorado remains the only state to "allow for a foreclosure without the lender first proving" it has the legal right to repossess a person's domicile. With the GOP so successfully defeating the reform proposal in the face of public outrage at bank fraud, look for the financial industry to try to get state governments to set the same "no doc foreclosure" precedent all over the country.

Then there are corporate taxes, perhaps the most egregious area in which the government uses its power to shield politically significant information. As the Institute on Taxation and Economic Policy reports, “neither the SEC nor most state governments require corporations to release detailed information on their state corporate tax payments” -- which deliberately makes it “hard to identify which corporations are not paying their fair share at the state level.” At the federal level, after corporate tax disclosure laws made it onto the books in the 19th and early 20th centuries, they were removed. Bloomberg News notes that the Financial Accounting Standards Board has the power to “make the income-tax returns of all companies with shares traded on U.S. stock markets available to the public,” but that it has refused -- even in the wake of reports proving that many of the most profitable corporations are now paying no tax at all in America’s loophole-ridden tax system. The result is that the government empowers corporate management to prevent both companies’ shareholder-owners and the public at large from ever evaluating a firm’s tax compliance -- or lack thereof.

Each of these examples -- and the many others like them -- are closely related to the concurrent corporate efforts to prevent labeling mandates. And as disparate as such examples may seem, they each prove that 21st-century capitalism and old-school Orwellian control are not polar opposites, as they are often portrayed. On the contrary, those two political forces now often coexist in a symbiotic relationship -- one that uses state power to keep politically charged information hidden. The theory beneath the calculation is simple: Public ignorance equals corporate bliss.

With protest movements rising and the possibility of widespread social unrest a real possibility, we should expect that calculation to be more prevalent in our politics than ever.