The hint Santorum refuses to take 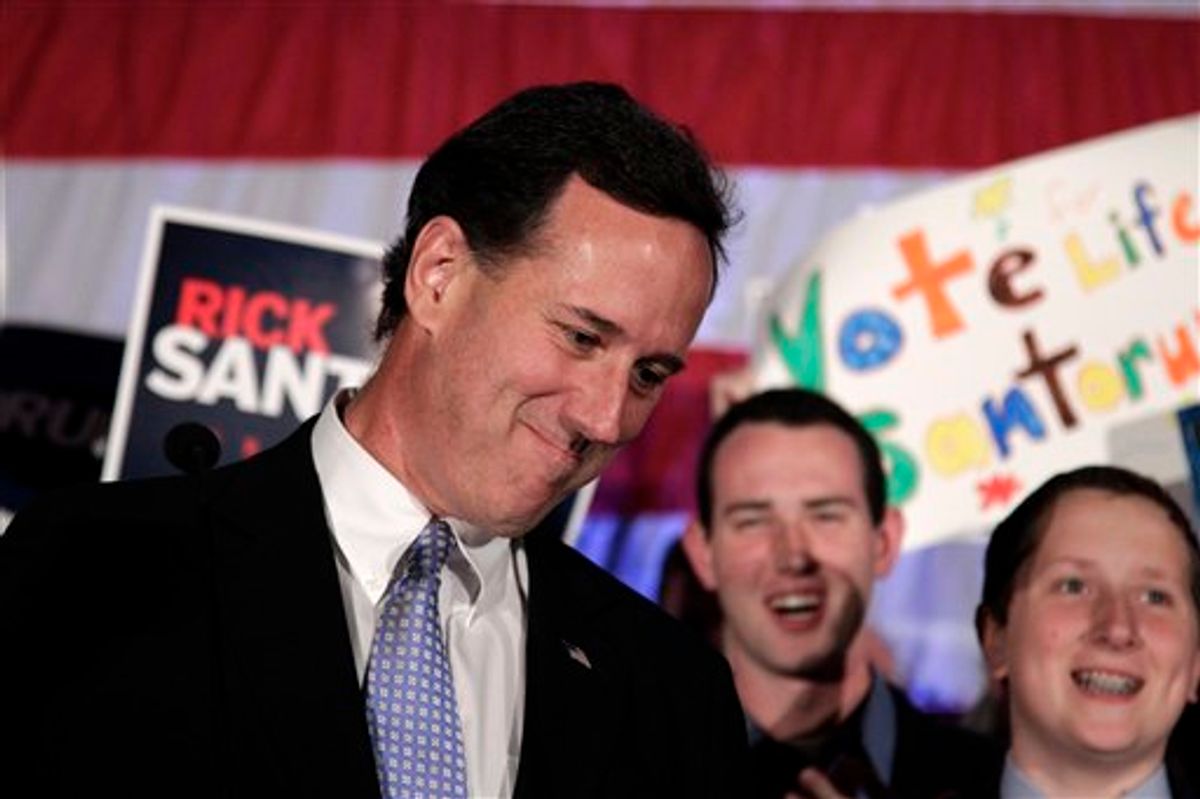 Rick Santorum made it clear last night that he’s staying in the Republican race all the way to the convention in Tampa, Fla. Of course, Michele Bachmann was equally adamant on the night of the Iowa caucuses that she'd stay in the race, only to pull the plug 12 hours later, and so was Rick Perry on Jan. 15, about 72 hours before he abruptly withdrew and threw his support behind Newt Gingrich.

The moral of the story: Things change and it’s best to take these things with a grain of salt.

The dilemma Santorum faces in the wake of his Wisconsin defeat is the same one he’s been facing for a while now. He’s far behind Mitt Romney in the delegate race and Romney is on pace to either break the magic 1,144 number by the end of the primary season or come close enough for a handful of the GOP’s superdelegate equivalents to put him over the top. It’s essentially unimaginable that anyone but Romney will be the GOP nominee.

At the same time, though, it’s still quite possible for Santorum to win a bunch of primaries and caucuses – maybe as many as 10 – between now and the end of June. That estimate is based on the demographic divide that has defined the Republican race: In states where more than half of the Republican voting universe is composed of evangelical or born-again Christians, Romney still has yet to win. In states where the evangelical number is under 50 percent, he still hasn’t been beaten. This persistent, demographically specific resistance to Romney makes North Carolina, Indiana, Nebraska, West Virginia, Arkansas, Kentucky, Texas, Montana and maybe even Oregon all inviting targets for Santorum.

So while the overall math may be grim, Santorum’s impulse to stick around is understandable. If he can close the primary season with a series of victories, it could strengthen his position for 2016, cementing his standing as the leader of the party’s conservative wing and setting him up to say, “Told you so!” if Romney then goes on to win in the fall.

In his speech last night, Santorum talked extensively about Ronald Reagan’s 1976 campaign, when Reagan was swamped by Gerald Ford early on, only to dominate the May and June primaries. Reagan ultimately fell short at the convention, but when Ford was beaten by Jimmy Carter that fall (after a campaign in which Reagan remained conspicuously on the sidelines), the Gipper became the favorite for 1980.  For all we know, Santorum is already thinking about a similar long game for ’16.

But if this is Santorum’s game plan, it’s a risky one. For one thing, last night’s results provided some tentative evidence that Romney may be breaking through the demographic ceiling that has bedeviled him. In Wisconsin, where he won a five-point victory, exit polls showed Santorum barely edging out Romney among evangelicals, 41 to 38 percent. The gap has been much more substantial in other states – 17 points in Ohio, for instance. There was similar tightening in Maryland, where Romney actually won evangelicals by 3 points (41 to 38 percent) en route to an 18-point statewide romp.

If this means that the resistance of the GOP’s hardcore Romney-phobes is melting away in the face of his inevitability, it could undermine the math that Santorum is banking on in the May and June states. If a string of impressive (if ultimately futile) primary wins would allow him to end the race with his long-term prospects enhanced, going out after a series of drubbings and being accused of staying around too long could have the opposite effect. Santorum may think he’s Ronald Reagan in 1976, but he could just as easily end up being the Republican equivalent of Jerry Brown.

For Santorum, the risk of pressing ahead is underscored by the next state on the calendar: Pennsylvania, which he represented in the Senate for 12 years. Santorum’s ugly 18-point loss in his home state in 2006 is the reason his party and the entire political world ignored him until days before the Iowa caucuses in this campaign. That his candidacy caught fire at all is a fluke for the ages, but Santorum is much more of a national player now than he’s ever been. But what if he suffers another humiliating defeat in his home state, this time to Romney? Will it erase all of the progress Santorum has made, and reinforce the “loser” tag that haunted him for almost all of 2011?

The possibility of a Santorum defeat in Pennsylvania on April 24 is very real. Demographically, it fits the profile of a Romney state. The evangelical share of the GOP primary vote will not approach 50 percent. Santorum’s favorite son status will help, but the latest poll only has him 6 points ahead. In recent times, only one active presidential candidate has won a primary and then gone on to lose his or her home state – Brown, who lost the 1992 California primary to Bill Clinton. That is not company that Santorum wants to keep.

Theoretically, a Pennsylvania loss shouldn’t keep Santorum from winning in May and June, if the resistance of evangelicals to Romney remains steadfast. But practically speaking, it’s hard to imagine him being treated as anything but a punch line if he fails to win his home state in three weeks.