Why is tweenhood so fraught with "drama"?

Technology has transformed the process of growing up. An expert explains how to help girls in their "drama years" 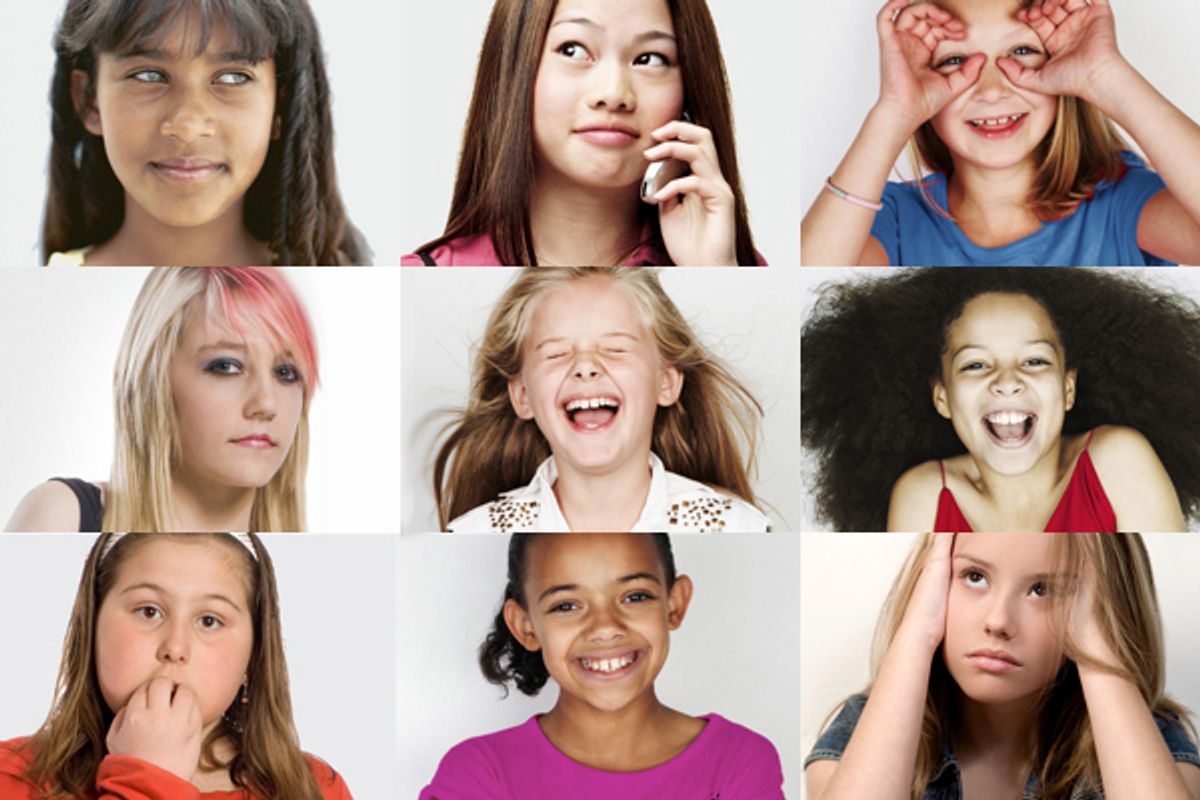 A detail from the cover of "The Drama Years"
--

They're not the carefree years. They're not the everything-is-awesome years. They are, as Haley Kilpatrick explains, the drama years. It's that uniquely turbulent time in a girl's life between childhood and adolescence, when friends become frenemies, when hormones run amok, when the pressures of school and activities ramp up, and Mom and Dad suddenly just don't get it anymore. Welcome to middle school, kid.

Kilpatrick understands. While still in high school in her small town in Georgia, she founded the national peer mentoring organization Girl Talk, mostly as a means of helping her younger sister navigate the social minefield she herself had only just departed. With its emphasis on helping tween girls learn from teens who've survived their own drama years, Girl Talk now has chapters in 43 states and six countries.

But after a decade in the tween trenches, Kilpatrick (with the help of co-writer and former Salon.com contributor Whitney Joiner) is sharing the secret life of girls with the people who often seem the most blindsided by it – their parents and educators. "The Drama Years," published this week by the Free Press, is a plainspoken set of dispatches from the front lines of tweenhood, culled from three years of interviews with girls around the country and framed in their own quirky, authentic voices.

As the mother of one middle school-aged daughter (and a younger one who's careening toward her own tweenhood), I know all about drama -- and the ways that stony silences can erupt into tears, or that blossoming maturity can go hand in hand with exasperating stubbornness. Case in point: When a copy of "The Drama Years" arrived at our house, my daughter rolled her eyes at the array of tween archetypes on the cover and huffed, "Which one is this supposed to be me? I don't know anybody who looks like this."

Yet the "dramas" of the book -- defined by chapters on body image, materialism, friendship, the intense pressure to succeed and more -- do look familiar. And the fact that we as parents are struggling through this unique time in our children's lives right along with them is new and challenging territory in and of itself. As my friend Louis, a Bay Area artist with an 11-year-old daughter, says, "In my house we let the kids say whatever is bothering them and we try to help them fix it. My parents didn't give me this kind of platform. I can see why they said, 'We're not doing this.' It's exhausting to live with this shit over and over."

And even my daughter, wielder of drama though she is, acknowledges her growing pains can be rough on the family members in her warpath. "Everybody says you're supposed to live in the moment. Well, when you're in the sixth grade, everything is all in the moment, all the time. That's why when I can't figure out my homework or the outfit I wanted to wear today is in the laundry, it feels the most important thing in the world. "

Salon spoke recently with Kilpatrick about Girl Talk, the new book and what our tweens want us to know about their drama years.

You've been doing Girl Talk and working with middle-schoolers for a decade. Why did you decide to do something now addressed to adults?

It grew out of behind-the-scenes conversations with adults around Girl Talk. They'd ask, "Are there things they're not telling me? How can we help them? I felt obligated to put together a document that would be a resource for them.

Tweenhood feels like such huge terrain to tackle in a book. How do you stay specific about it? Can a seventh grader in one set of circumstances, in one part of the country, really grasp the issues that another in a very different environment might be facing?

When I started this 0 years ago to help my sister, I just wanted to make a difference in my hallways. It turned out that whether it was inner-city schools or elite private schools, there are so many things girls have in common. That's how we defined the nine core issues in the book we wanted to address.

We have programs in boarding schools in Connecticut and the slums of Cabrera; we have girls from upper-middle-class families and we have girls in foster care and shelters. It doesn’t matter if you live in a rural area or a city. There's a horizontal line that goes right through middle school. Girls everywhere need to feel validated by their peers, to feel like they're making their parents proud, and to know that it's OK to change. There's so much stigma that peers put on each other. They say, "Oh, she's changed." Well, everything changes in middle school. You're supposed to change. What I want to see is girls of all different backgrounds coming and laying the tracks for how they'll treat each other through high school and womanhood, and break the cycle of some of the negative things women do to each other.

One of the things that I thought was admirable about the Girl Talk model and the book is that it teaches younger girls that older girls can be their allies instead of enigmas.

Not having an older sister, I was completely intimidated by older girls when I first got on the school dance squad. I was terrified of them. But if you expect older girls to have good behavior and you say, "You would be an amazing leader and role model," there's something about that that flips the switch in high school girls' minds. They're someone to look up to. That's a great thing for girls -- learning though teaching each other.

And it takes some of the pressure off parents. It seems like so many parents spend their daughters' lives being overprotective, and they get to the tween years and the girls don't know how to fend for themselves.

How are things different for tween girls now than they were even a few years ago, when you were in middle school?

The one line that sums it up is that there've been more technological changes in the past decade than ever in human history. Now girls feel so much pressure, knowing that anything they say or do can be something that hundreds -- even thousands -- of people can see. There's a fear of being judged and it's creating a huge social anxiety disorder. Girls are nitpicked from head to toe, and that pressure to look beautiful and feel perfect is relentless.

Meanwhile, parents are scared of this unknown world their kids are in, and the long-term effects of what they're doing there. You have to know your child and how they're affected by things people say. I see schools now trying to establish norms to prepare kids, because the way we're communicating with each other is not a way that's respectful. We give attention to the bullies and the mean girls. But if we focus on kindness, that will become the norm.

What do middle-school girls most want their parents to understand about their lives?

Remember their brains are still developing. Adults see the world and their problems vertically. They prioritize them. Middle-school girls see their problems on a horizontal line. It all has equal weight. We asked every girl, "What is stressful in your life?" And girls would say, "I'm stressed because I don't have the right clothes and I'm nervous about school and I had a fight with my friend and my brother is sick." That's really how they see things. That's why the word they keep coming back to is "drama." So don't think she's an alien or she can't prioritize.

The greatest gift you can give her is your presence. It's so hard to be completely present in conversation, but challenge yourself when you want to move ahead to the million other things you've got going on. Engage in a conversation, ask for an update, ask what's causing stress. You know those days when she's hysterical? Please refrain from just saying, "Don't worry." She wants you to listen to her, to say it's OK and know you're there and sympathize at that very moment. Put a note in her lunch, get a dry erase board and write her a message. Remind her that you're there and you care and you're listening.

You daughter wants you to understand that she's going to fall and she's going to mess up. You can't walk the tightrope with her anymore. All you can do is let her know you're there for her with the net, cheering her on.