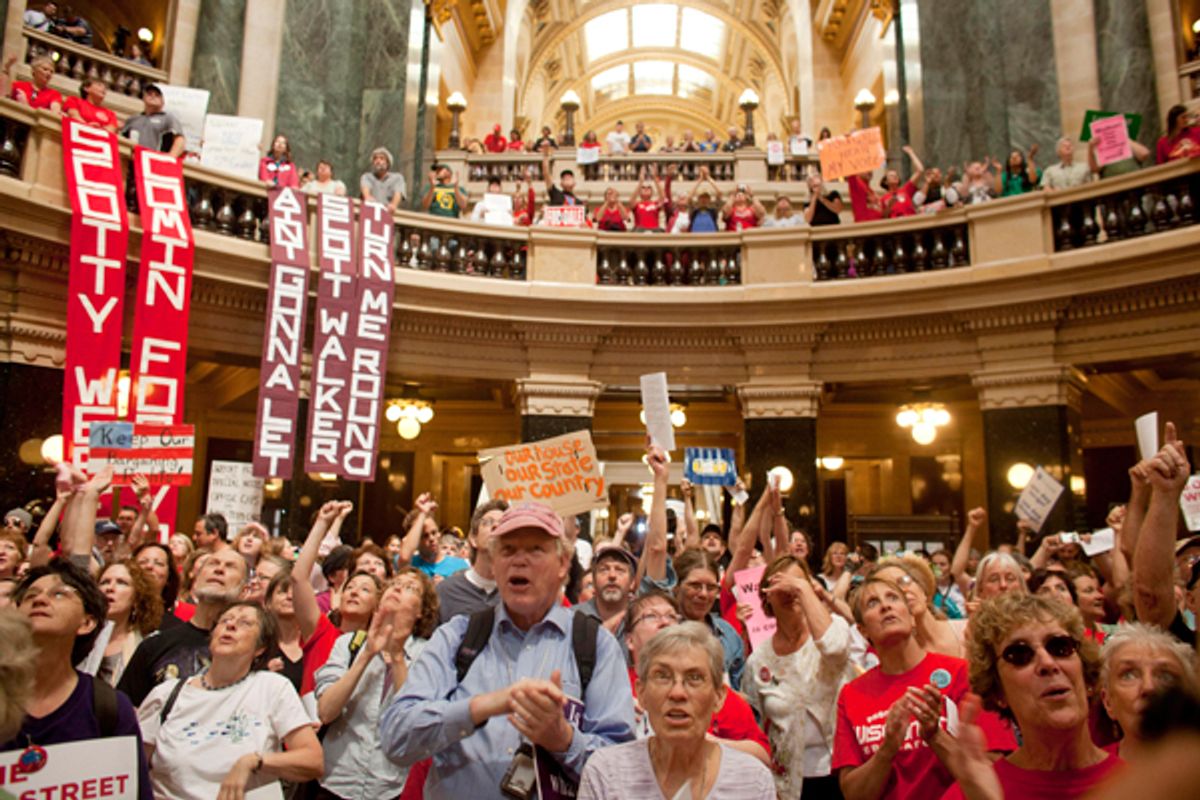 Unions in Wisconsin made history by mobilizing the recall against Gov. Scott Walker, but it's too soon to say whether the state will follow through and kick him to the curb. One thing that could work in his favor: The inability of some of the state’s powerful unions to consolidate behind a Democratic candidate to oppose him. Having come this far, some labor activists now question whether the best way to flex their muscle is to sit out the election altogether.

This is the drama unfolding at the Teaching Assistants Association, which represents graduate students and project assistants from the University of Wisconsin-Madison. No union is more identified with the anti-Walker mobilization. Days after he introduced his bill to gut collective bargaining, TAA members showed up at the state capitol, sleeping bags in hand, and kicked off what became a 16-day occupation. That emboldened Democratic senators to flee the state to deny Walker a quorum – bringing national media attention to the controversy.

Now a month before the May 8 primary, two Democrats, former Dane County Executive Kathleen Falk and Milwaukee Mayor Tom Barrett, are neck-and-neck at the front of the pack. And TAA members are split on what to do about it.

At issue is whether the union should support a candidate who hasn't pledged to restore cuts to public workers’ wages and benefits -- one of the criteria the TAA originally listed as a a prerequisite for an endorsement. Falk, who entered the race in January, is the only candidate who has pledged to veto any budget that doesn’t restore collective bargaining rights. But she also frequently touts the $10 million in concessions that she secured in negotiations with local unions as county executive. Barrett, who entered the race Friday, is more problematic when it comes to cuts: Last year, as the debate over collective bargaining raged, he told a conservative radio host that he opposed Walker's collective bargaining changes but supported his proposed cuts.

"While Barrett was positioning himself as Walker-lite to the right-wing radio audience, Kathleen Falk was in court suing the state Senate for violating the state's open meetings law," says Mike Amato, the chairman of TAA's Political Education Committee. Amato's committee voted unanimously to recommend that the membership get behind Falk in February, but the rest of the union hasn't accepted the advice. It voted in March to remove the endorsement conditions, but still did not endorse Falk.

Some now argue that it is better for the union to endorse no one rather than compromise on its principles.  TAA’s co-president, Adrienne Pagac, says the union should have left the endorsement conditions in place. “Some people were frightened that it was asking too much … Are we asking too much when we say we just want back what we had when Governor Walker came into office?” Pagac says. Falk’s boasts about Dane County make her worry that, as governor, Falk would join Democrats like New York's Andrew Cuomo in shortchanging workers rather than asking the wealthy to make sacrifices.

Amato says that, while he supported the “No cuts” call at the capitol last year, reversing year-old concessions is the wrong place to draw a line in the sand. “Were she to say that she would restore every cut to every union … that would doom her candidacy, and on June 6 we would have Walker in the governor’s office,” he says. "I think we absolutely have to make sure that we defeat Walker.”

Pagac counters that a Falk endorsement would preserve political incentives that push candidates to the middle of the road while leaving unions under the bus. “The labor movement has become a fine-tuned machine in terms of being able to turn out voters …” says Pagac. “Organizing workers takes a lot longer.” If unions are strong enough, she says, “it doesn’t matter what political party is in office, because you have the ability to use that power, the power that you have in the workplace, to extract wins from your employer and the state.”

Amato says “one of the false ideas” held by some TAA members is that there’s “a zero-sum relationship where we have to do workplace organizing or political organizing.” Rather, he says, political activism is an opportunity to engage more members in the union. He worries that sitting out the election will hurt the union’s relevance, and will send the wrong message to others who occupied the capitol: “As an organization that is looked to for leadership, we have a responsibility to lead.” He also worries that rejecting Falk for excessive moderation could hand the primary to Barrett. “The idea that we’ve come this far and then we’re going to sit out the election boggles my mind.”

The TAA membership will meet again next Thursday. Amato says he doesn’t know whether he’ll revive the motion to endorse Falk. “It’s become a really contentious issue,” says Amato, “and I think a lot of us are starting to question how hard we’re going to push on it.  I think it will absolutely be a big mistake if we don’t endorse Kathleen Falk.” But if both sides remain adamant, says Amato, “I also don’t think it’s worth tearing apart the union.”