The NYT publishes a big report on the Persian Threat filled, as usual, with inane decrees from anonymous officials 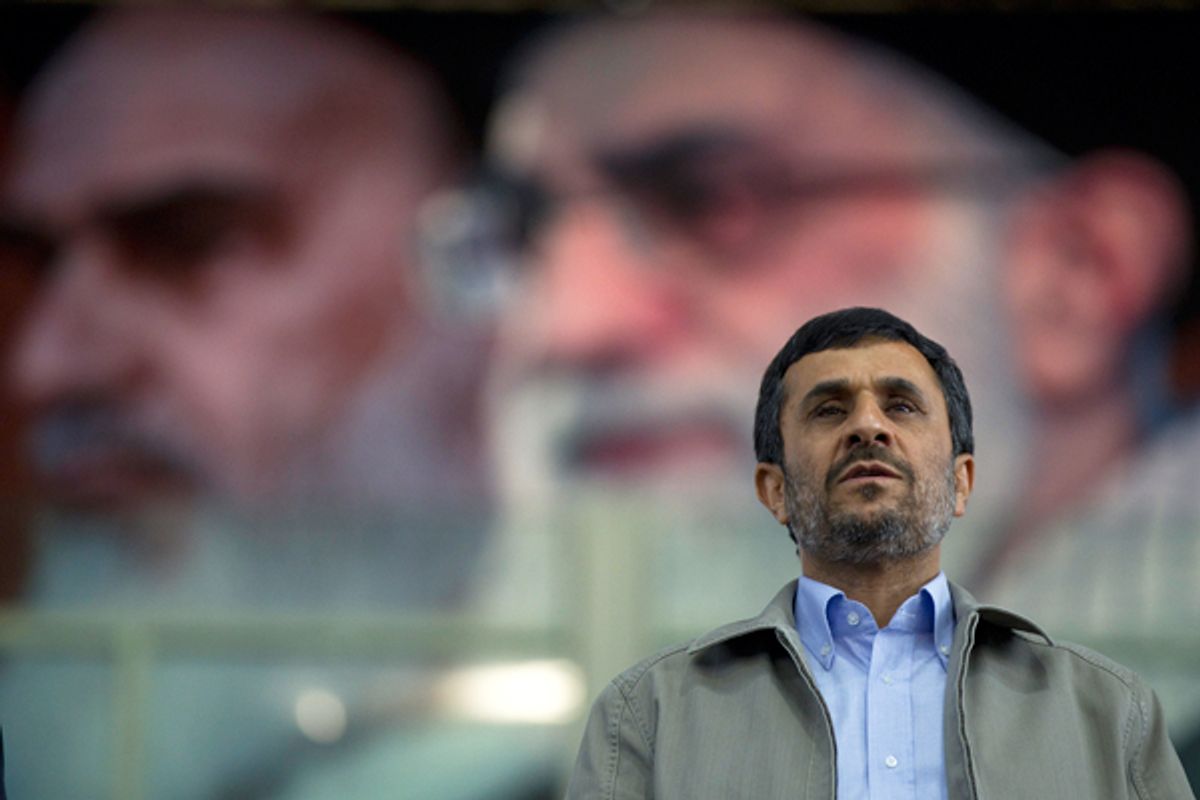 The New York Times this morning is prominently featuring a long article documenting the Terroristic aggression of Iran, as evidenced by that country's attempts to exert influence and foment unrest in Afghanistan: because, as all decent people know, only tyrannical fanatics would attempt to interfere in Afghanistan (similarly, a couple months ago, President Obama and Secretary Clinton both sternly warned the rest of the world, particularly Iran, not to "interfere" or "meddle" in Iraq; they did so as Clinton simultaneously announced that the U.S. "will have a robust continuing presence throughout the region"). The International Community knows that interfering in those countries is the exclusive prerogative of the U.S. and its allies, and Iran's attempt to assert influence -- in countries that directly border it -- is clear evidence of its status as a rogue, Terror nation.

I want to focus here on the reporting methods of the NYT. A couple weeks ago, I wrote a column entitled "What NPR Means by 'Reporting'" regarding its report that warned of the growing threat of Iranian "state-sponsored Terrorism." This growing Persian Terrorism, NPR explained, was evidenced by multiple "red flags" -- the attempt to kill the Saudi ambassador! the attack on Israeli officials! -- all of which shows that Iran is "back on the offensive." As a result, Iran is replacing Al Qaeda as the prime Terrorist threat. Nothing in the report mentioned the multiple acts of aggression against Iran; instead, the entire report was based on unchallenged pronouncements from two ex-National Security officials and one Washington think tank "expert" about unprovoked Iranian aggression and Terrorism. That led me to this observation: "this is what establishment-serving journalists in Washington mean when they boast that they, but not their critics, engage in so-called 'real reporting'; it means: calling up Serious People in Washington and uncritically repeating what they say."

Here are the first three paragraphs of this morning's big NYT report:

Just hours after it was revealed that American soldiers had burned Korans seized at an Afghan detention center in late February, Iran secretly ordered its agents operating inside Afghanistan  to exploit the anticipated public outrage by trying to instigate violent protests in the capital, Kabul, and across the western part of the country, according to American officials.

For the most part, the efforts by Iranian agents and local surrogates failed to provoke widespread or lasting unrest, the officials said. Yet with NATO governments preparing for the possibility of retaliation by Iran in the event of an Israeli attack on its nuclear facilities, the issue of Iran’s willingness and ability to foment violence in Afghanistan and elsewhere has taken on added urgency.

With Iran’s motives and operational intentions a subject of intense interest, American officials have closely studied the episodes. A mixed picture of Iranian capabilities has emerged, according to interviews with more than a dozen government officials, most of whom discussed the risks on the condition of anonymity because their comments were based on intelligence reports.

The article is basically written by "American officials," all of whom are granted anonymity with no real justification, given that they're all reciting the official government line about Iran in unison. The first three paragraphs of the story consist of literally nothing other than the unchallenged pronouncements of these officials. And it all leads to this:

Those activities also reflect a broader campaign that includes what American officials say was a failed plot to assassinate the Saudi ambassador to the United States in October, and what appears to have been a coordinated effort by Iran to attack Israeli diplomats in India and Georgia this year. . . .The plots have also prompted American and other intelligence agencies to renew their focus on state-sponsored terrorism after a decade dominated by Al Qaeda, its regional affiliates and other shadowy terrorist networks. American officials say they never took their eye off state-sponsored threats, but rising tensions with Iran have caused these organizations to re-emerge in the public eye.

All of that is virtually identical to the NPR report in every single respect. That's because it is written exactly the same way and with exactly the same agenda: we now turn over our media outlet to the pronouncements of anonymous government officials, who will explain -- under the guise of a "news report" -- why the U.S. is being victimized by an increasingly aggressive and Terroristic Iran. Both in methodology and conclusion, it is pure state-run media propaganda, by definition: shaped exclusively by official government assertions, amplified without skepticism or challenge. It's not even hidden: Iranians are the Terrorists and its menacing aggression is proven by its attempt to "stir unrest" in Afghanistan. And then there's this:

Iran appears to have increased its political outreach and arms shipments to rebels and other political figures in Yemen, and it is arming and advising the embattled government of President Bashar al-Assad of Syria.

So Iran is supporting rebels fighting a dictatorship in one country (Yemen) and supporting the dictatorship in another (Syria). In those two countries, the U.S. is doing exactly the reverse: propping up the Yemeni dictatorship while arming the Syrian rebels. Why is one better than the other or a greater sign of aggression and threats? One would think this way only if one is a U.S. government national security official, or -- obviously -- if one is a New York Times reporter and editor purporting to publish "news reports." That the mentality of those two groups is indistinguishable -- even though one is supposed to be "adversarial" to the other -- is the point. I actually think the methods that led to the Iraq War journalism debacle have intensified and worsened since then, not improved. The uncritical relationship and overlapping functions of government officials and establishment media organs are more severe than ever.

Both Digby and The Atlantic's Robert Wright make two good, separate points about the hiring by CurrentTV of Eliot Spitzer to replace Keith Olbermann: she laments that so many progressives, based on a sex scandal that is really none of their business, now demonize the only political official to meaningfully crack down on Wall Street in decades, while he notes the irony that a media outlet devoted to "progressive" values names as its new standard-bearer someone who holds such hawkish, war-loving views (I'd say that's possible because the Obama presidency has basically eliminated any distinct progressive set of beliefs on national security and foreign policy).