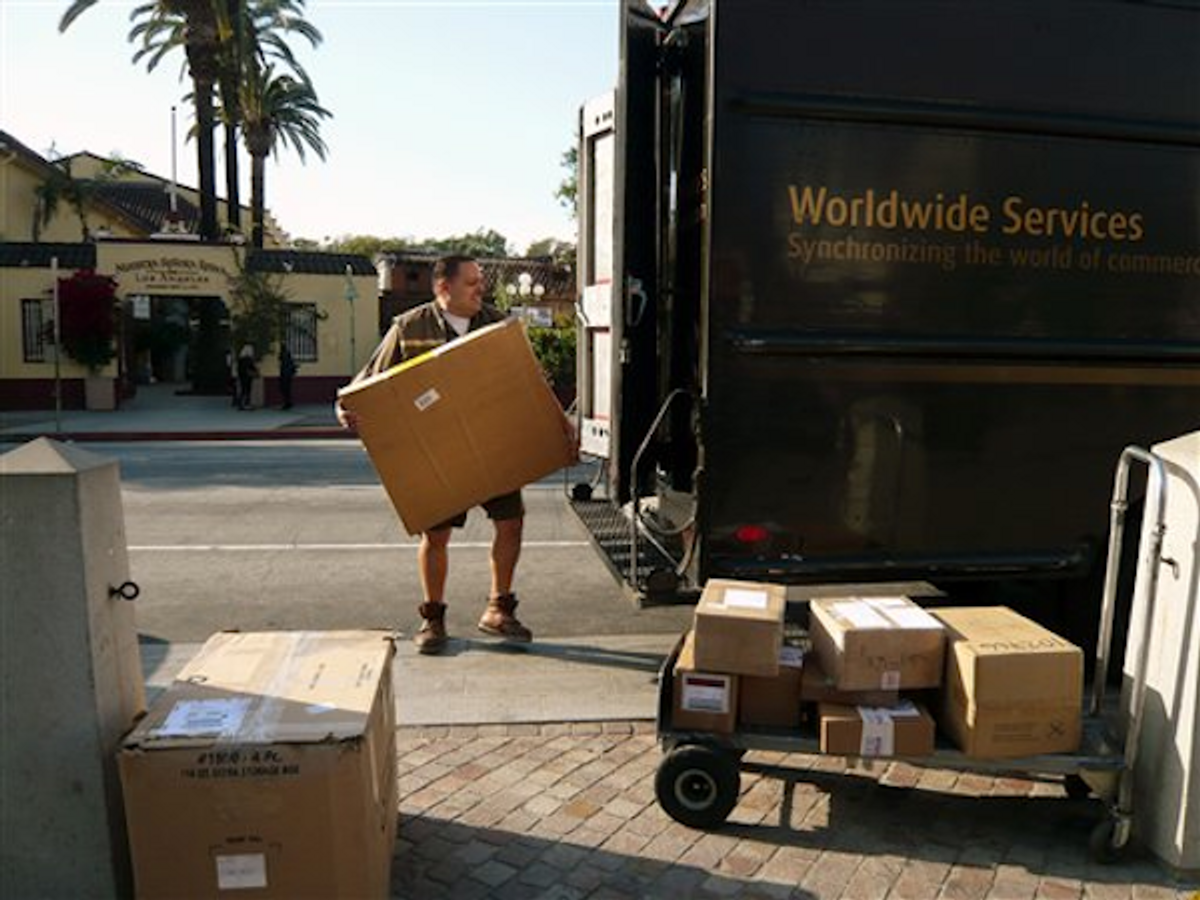 This originally appeared on AlterNet. It's the fourth essay in a five-part series analyzing the foundations, history and purpose of the corporation to answer this vital question: How can the public take control of the business corporation and make it work for the real economy?

For the last four decades, U.S. corporations have been sinking our economy through the off-shoring of jobs, the squeezing of wages, and a magician’s hat full of bluffs and tricks designed to extort subsidies and sweetheart deals from local and state governments that often result in mass layoffs and empty treasuries.

We keep hearing that corporations would put Americans back to work if they could just get rid of all those pesky encumbrances – things like taxes, safety regulations and unions. But what happens when we buy that line? The more we let the corporations run wild, the worse things get for the 99 percent and the scarcer the solid jobs seem to be.

Yet the U.S. Chamber of Commerce wants us to think that corporations – preferably unregulated! – are the patriotic job creators in our economy. They want us to think it so much that in 2009, after the financial crash, they launched a $100 million campaign, which, among other things, draped their Washington, DC building with an enormous banner proclaiming “Jobs: Brought to you by the free market system.”

But the truth is that unfettered corporations are just about the worst thing for creating decent jobs. Here’s a look at why, and where the good jobs really come from.

Corporations are kind of like wild horses. They can run you down. Or sweep you around in circles till you’re exhausted. And in today’s world, they’ll surely run off and take your jobs to China or someplace else if you don’t learn how to tame them.

Bad things happen when corporations are unconstrained by strong national policies that force players to think long term, behave decentlyand refrain from dumping their short-term costs on the rest of us. They tend to focus single-mindedly on maximizing profits for shareholders at the expense of all else – including jobs. Executives set their sights on a path to short-term boosts in share prices paved with layoffs, wage cuts and jobs moved overseas, while slashing research and development and investing in the skills of their employees.

The U.S. Department of Commerce found that from 2000 to 2009, U.S. transnational corporations, which employ about 20 percent of all American workers, cut their domestic employment by 2.9 million even as they boosted their overseas workforce by 2.4 million. The result was an enormous loss of jobs nationally, as well as a net loss globally.

In the 1990s, these companies added more jobs at home than abroad. What changed? 1) The rise of India and China, with 37 percent of the world’s population, as hotspots for off-shoring; and 2) the availability of tens of millions of workers in these places, many with college degrees, to do the jobs previously done by American workers.

In India, indigenous companies like TCS, Infosys and Wipro along with transnationals like IBM, HP and Accenture, employ hundreds of thousands of college-educated workers to perform IT services, in large part for American firms. In China, the electronics contract manufacturer Foxconn (headquartered in Taiwan) barely existed a decade ago, but now employs about 1.2 million workers, with Apple its single biggest customer.

And yet Big Business still trumpets itself as the American Job Creator Fairy. Apple has released a report claiming to have created half a million domestic jobs – a highly dubious number which takes credit for everything from the app industry to FedEx delivery jobs (never mind that drivers would be hauling someone else’s gadgets if Apple went out of business). It’s true that in the U.S. managers, engineers and other professionals have found good jobs at Apple. But the non-professional employees are just barely scraping by. A study of the iPod value chain in 2006 calculated that among Apple’s domestic employees, professionals earned around $85,000, not counting stock options, but the retail workers in Apple’s stores earned only $26,000. This is troubling because as Apple has grown in size, most of the employees it has hired in the U.S. work in retail. Are these jobs paths to long-term, stable careers? Quite likely they are not.

While a company like Apple whistles "God Bless America," executives are not going to talk about the job losses induced by off-shoring, nor the horrifically abused foreign workforce that moving jobs to China has produced. And they’re not going to tell us about Apple’s preference for hiring part-time employees who can’t afford to buy health insurance. When such uninsured people have health emergencies, someone has to pay and the burden falls on the taxpayers.

Here is what Apple executives tell us instead: “We don’t have an obligation to solve America’s problems.”

Corporate executives have lost the sense that they owe anything to the public. They have forgotten that the 99 percent, as taxpayers, have made huge investments in them. They fight to lower taxes as if all the money “belongs” to the companies. They fight regulations as if the public doesn’t have the right to interfere in their business.

Despite the anti-government rhetoric from conservative leaders, the truth is that the government, elected by the people, plays a critical role in creating the conditions in which companies can succeed and good jobs can flourish. The government is able to invest in human capital through key services like education. What’s the point of a job if you don’t have an educated worker to fill it? The government also creates job-friendly conditions by investing in infrastructure. How can you get to work if your roads and bridges are falling apart? And it boosts job creation through investing in technology. How could Google create its amazing search engine without state investment in the creation of the Internet? When the government invests in the knowledge infrastructure, businesses can then employ and train people who can, in turn, engage in the kind of organizational learning that leads to that wondrous thing called "innovation."

We learned this once before. After Wall Street financiers ran amok to cause the Great Depression in the 1930s, the government responded by putting in place regulations on banks and corporations, a highly progressive tax system and a robust social safety net. President Franklin D. Roosevelt created the conditions in which good jobs were possible with programs like the Civilian Conservation Corps and other New Deal initiatives. He focused on the development of highways, railways, airports and parks, investing in the future rather than focusing solely on short-term profits. The GI Bill, rather than leaving graduates with big debts, left them well educated and therefore with a chance of to provide a middle-class life for their families and to retire with dignity.

After victory in World War II, America was able to emerge as the world’s most powerful nation because it had a large middle-class and a strong industrial and technological base. The horses of Big Business were tamed, and they could be harnessed to do useful things for society. Then came the Reagan Revolution and Big Business freed itself from the regulations, unions and taxes that had curbed its worst instincts and it began to shred the nation’s economic and social safety net. The gap in income inequality grew, and jobs were eliminated and outsourced. Long-term investment in innovation and human capital slowed down, while fraud and financial speculation took off.

Today, corporate executives ask for more special treatment and freer rein in calling the shots in our economy, and they threaten to pack their bags if we don’t agree. Some politicians and policy makers respond to this blackmail by saying that we have to create a “friendly business climate” to convince them to stay. But what makes a "friendly business climate"–low wages, minimal taxes and so on -- creates a very hostile climate for the 99 percent, which is ultimately bad for everyone – business included. The state of Mississippi and Rick Perry’s Texas, where city and state officials bent over backwards to lure Big Business with subsidies and other perks, are hardly bursting with good jobs.

Many researchers have concluded that tax rates are actually not terribly important to where a company locates. Further, a common rule of thumb for business headquarters location is that quality of life for key personnel is decisive. True, vastly different levels of regulation in the U.S. and China is a problem for which there are no easy answers. But there are real costs to ignoring the environment and keeping workers in a state of misery. If you want job growth, you have to have demand growth: profits and consumption go hand in hand.

That’s why the best way to unleash America’s job-creating potential is to support rights and protections for ordinary people. A climate friendly to the 99 percent is not just fair, it makes the best sense for the economy. We need to remember the complementary roles that government and business have to play in creating well-paid, stable employment opportunities and then ensuring that people can access these opportunities over the course of their careers. To get corporations working for the 99 percent on the job front, we have three major challenges:

2) Incentives: Corporations must have incentives to retain educated and experienced workers instead of laying them off or off-shoring their jobs. (To do so forces valuable workers into low-skill jobs and wastes their human capital, which was expensive to acquire.)

3) Investment: Executives of financialized corporations who want the government to invest in the knowledge base have to make complementary investments in people that can keep the U.S. economy innovative and generate good jobs. That would mean changing the single-minded focus on boosting company stock prices through buybacks and other financial manipulations that serve the 1 percent but no one else.