For the most part, employees can get fired for anything from wearing the wrong color shirt to having an affair 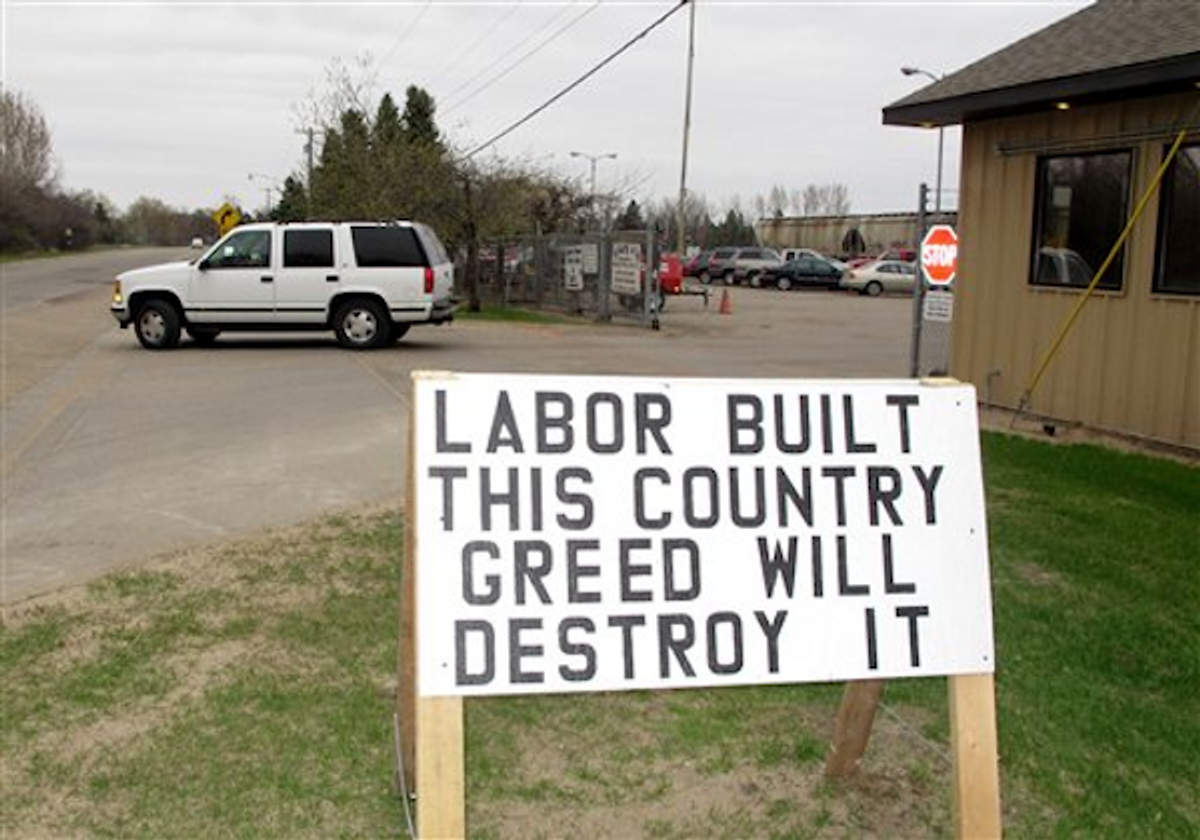 A pro-labor sign is posted outside the entrance of the American Crystal Sugar Co. plant in Moorhead, Minn., Monday, April 2, 2012 (AP Photo/Dave Kolpack)
--

On March 16, at least 14 employees of the Elizabeth R. Wellborn law firm, located in Deerfield Beach, Fla., wore orange shirts to work. For this style choice, they were marched into a conference room and summarily fired. Wellborn’s husband declared that the shirts were a protest against working conditions at the 275-worker law firm, and that management would not stand for such behavior. (Early reporting claimed the workers’ dress merely signified a way to easily organize a happy hour outing, although it later came out that while that was true for some, others were dressed in the color of prison uniforms to protest draconian new work rules.)

Aren’t such tyrannical, arbitrary and callous acts illegal? Can management just throw you out on your ear, upending your life and endangering your ability to support yourself, for wearing the wrong shirt? Freedom of speech, freedom of expression, right?

The First Amendment and many of the Constitution’s other protections only extend to the government, not to private employers. Freedom of speech and expression are not protected in the private-sector, nonunion workplace. You could be fired for, say, wearing a pin advocating a particular political party. You could also be fired for sporting a smiley face pin.

“People assume they have a lot more protection at work than they actually do,” says Judith M. Conti, federal advocacy coordinator for the National Employment Law Center (NELP). “People also assume they have some right to be treated decently, and fairly, and respectfully at the workplace. They have the right to freedom from discrimination based on certain immutable characteristics like sex, race and age, but as long as treatment at work isn’t related to one of those characteristics you can be treated badly with no legal recourse. It’s kind of a free-for-all.”

According to Donna Ballman, the labor lawyer six of the Wellborn employees have retained, the workers had no idea their jobs could be imperiled by their choice of clothing color. “Who would?” Ballman responded in an email message. “Most Americans think your employer must have a good reason to fire you.”

But for the most part, American workers labor under the auspices of employment-at-will, a doctrine that allows employers near total control to hire, fire and promote, for good reasons, bad reasons or no reason at all. Employment-at-will is a principle that dates back to British common law, which early settlers brought with them from the Old World during the Colonial era. It is a relic of that time and has long since been overturned in Britain, along with the rest of the world’s wealthy nations.

In America well over three-quarters of workers are covered by employment-at-will, with Montana (with a population of less than 1 million) being the only state with a law requiring employers to have “reasonable grounds” for laying people off. Outside of Montana, a union is the surest protection against employment-at-will’s regimen of near total employer power. (Only a tiny sliver of American workers belong to a union: at last count 7.2 million in the private sector, or 6.9 percent of the workforce.)

Any union contract worth its salt includes a “just cause” firing clause. This generally means that employers are free to fire or lay off workers for any number of reasons, including misconduct, poor job performance, job obsolescence, or lack of revenue. But they cannot arbitrarily punish workers because the manager is having a bad day, or because they don’t like your smile (or lack thereof), as employment-at-will allows. (As the employees of the Elizabeth R. Wellborn law firm learned, this manifestly unjust state of affairs is just as applicable to white-collar jobs as it is to the low-wage service sector workforce.)

As academic Corey Robin notes in his book "Fear: The History of a Political Idea," employers have wantonly exercised this power, and the judiciary has repeatedly upheld this despotic state of affairs. The courts have backed employers' right to fire their workers for such non-work related reasons as “carrying on extramarital affairs; participating in group sex at home; having children out of wedlock; smoking on the job; wearing, in the case of off-duty male police officers, an earring; and carrying on relationships and friendships with coworkers or employees of a competitor.”

The available non-union protections are spotty, at best. There are highly specific whistle-blowing exceptions (under the Clean Air and Water Acts, for instance), precisely negotiated contracts requiring just cause (which many employees are too scared to ask for), or an ethical employer, like Costco, can choose to complicate the firing process (the box store makes managers clear their decision with a regional vice president before they fire an employee of over two years). Government employees are generally safer from their managers’ whims, but as the public sector continues to shrink fewer Americans are enjoying that protection.

The employer’s legal ability to fire and discipline people for their non-work personal lives even stretches to sexual orientation: only 20 states, and the District of Columbia, have laws against such discrimination, while the Employment Non-Discrimination Act (ENDA) has languished in Congress for almost 20 years (since 1994, to be exact). Workers are protected against other forms of discrimination by the Civil Rights Act Title VII (race, religion, sex, age, and so on), although the burden of proof is punishingly high.

“There are plenty of cases where employees are fired for reasons of age or race, can show that they were unjustly terminated, but can’t prove by a preponderance of evidence that the subjective motivation of the employer was race, age or sex,” says Thomas Geoghegan, labor lawyer and author of the union movement memoir "Which Side Are You On?" “That’s a huge hill to climb. The reality is that there is much more protection from race, sex, age discrimination in countries where you just can’t be fired unless you have just cause for doing so.”

Most rich, democratic nations, including almost all of the European Union, Japan, South Korea, and Canada provide “just cause” protections for their workers. (Many less wealthy, but still democratic nations eschew employment-at-will, including many Latin American nations and South Africa.) The laws vary, but they generally provide what only a union contract in the United States does: You can’t be fired for any old reason. Many nations even have an independent labor court system to adjudicate such cases. America’s much vaunted Constitution is not so generous.

Unfortunately, change does not seem to be in the offing. Neither Geoghegan or Conti are aware of any current legislative or popular challenges to employment-at-will’s hegemony. A 2008 ballot initiative in Colorado would have put a just-cause amendment on the ballot. But labor leaders pulled it at the last minute in a deal with business interests to defeat a right-to-work initiative, which would have forced unions to provide services to non-dues paying workers.

Ballman notes that most states have an inspection apparatus to examine unemployment insurance claims, and if an employee is fired for misconduct, she is found ineligible for unemployment benefits. “But what about the employer who fires without just cause?” she asks. “Why not give the unemployment hearing officers one more power: the power to reinstate with back pay? Why should taxpayers have to pay because someone was in a bad mood and fired an employee?” (While this idea is appealing, Ballman admits it has no legislative traction.)

Although the Constitution does not protect them, the Wellborn workers could have a case under the National Labor Relations Act (NLRA). Ironically, management’s belief that the color coordination was an act of protest could make their wardrobe a protected activity under the NLRA. “Right now we are trying to reach an amicable resolution,” Ballman says. “We’ll see.”

Unfortunately, the NLRA’s protections are often scant. The employer fines it allows are embarrassingly small and its enforcement arm is notoriously overworked. The best workers can usually hope for is reinstatement with mitigated back pay, after a long and drawn out hearing process. Even reinstatement can prove a hollow victory: One 1980s law review found that 80 percent of those rehired are fired again within a year, while a 1998 study reported that 65.3 percent of the reinstated quit after less than a year back “because of what they perceived to be unfair treatment.”

That’s the best the federal government can offer American workers. Either way you lose your job for wearing the wrong shirt.