U.S. drone attacks may be helping the terrorist group gain sympathy and recruits in southern Yemen 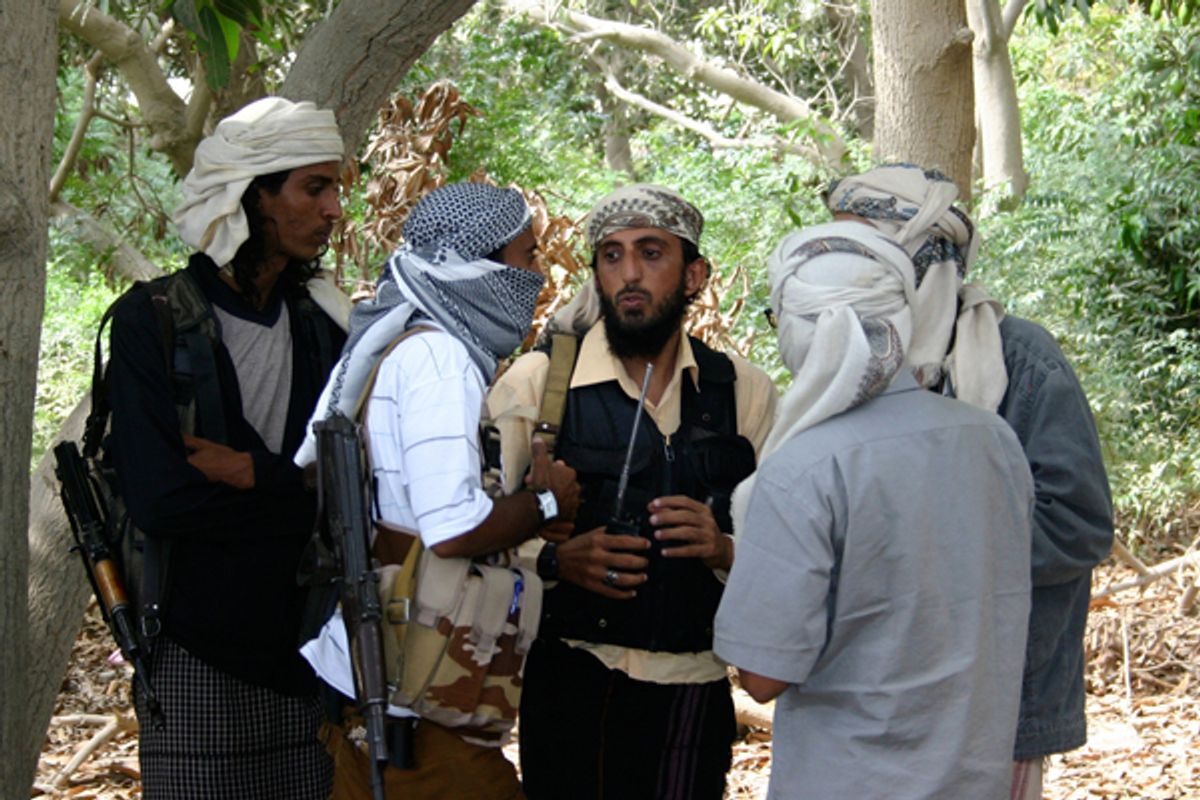 Members of a group affiliated with Al-Qaida talk in the southern Yemeni city of Zinjibar January 21, 2012 (Reuters)
--

ABYAN PROVINCE, Yemen — After a brief respite in the air assault on al-Qaida militants in Yemen, Sanaa and Washington’s warplanes are again scrambling.

A five-day bombing campaign mid-March, for instance, killed at least 60 militants across central and southern parts of the country. Most of the strikes — launched from warships, jets and drones — occurred in Yemen’s Abyan Province, a region on the Gulf of Aden that has become the latest and perhaps most important front in the war against al-Qaida.

Here, al-Qaida’s ranks have swelled in the last year, and at least five ciites are now controlled by the terrorist group.

Despite the hefty death toll, some think the military assault might be aiding the terror group more than hurting it, sewing sympathy for the militants and anger toward the Americans.

Yemenis who live in these poverty-stricken areas, long neglected by the central government, said that with al-Qaida now governing large parts of the region, some stability has finally arrived.

One local merchant, when asked by GlobalPost what he thought of the new government, said, “Very, very good. Very peaceful. I go to prayer knowing my store is safe. I leave the door unlocked."

Gregory Johnsen, an expert on Yemen at Princeton University, said the renewed military operations could have unintended consequences. He said the U.S. should focus more on strengthening Yemen’s central government than its military.

“I think such an approach actually does more to exacerbate the problem of al-Qaida in Yemen than it does to solve it,” he said. “The US counterterrorism strategy of air and drone strikes has also killed dozens of innocent civilians, which has further inflamed public opinion in Yemen and driven even more men into the arms of al-Qaida.”

Abyan has suffered from high unemployment, extreme poverty and rampant illiteracy rates, creating an environment in which extremist groups flourished.

Jaar, the first city in Abyan captured by al-Qaida last year, after nationwide protests shattered Yemen’s divided government, has become the main breeding ground for al-Qaida. It is now governed in a style reminiscent of how the Taliban ruled Afghanistan.

It’s also one of the top military targets of U.S.-Yemeni forces.

In a rare visit by a foreign journalist to Jaar on March 5 — the day after militants stormed a Yemeni base outside Zinjibar, killing more than 150 Yemeni soldiers and capturing 73 more — GlobalPost witnessed civilian life in the bombed out city.

At first glance, Jaar resembles most rural Yemeni towns, struggling after a year of uprisings choked off what few services a corrupt state government was willing to provide. Donkey carts wind through desolate streets piled with trash. Feral cats and dogs root through the garbage. In the shade of bullet-pocked storefronts and vacant buildings, haggard, bearded men drink tea and chew qat — a leafy stimulant widely used in the region.

But in one important way Jaar is different. The black-and-white flag of al-Qaida flies at each entrance to the city, flapping behind Kalishnakov- and grenade-strapped soldiers on motorcycles. Other al-Qaida soldiers patrol the city’s streets in army trucks pillaged from the Yemeni military weeks earlier.

Townspeople said al-Qaida provided them with reliable services, such as electricity, food, water and even healthcare, though officials would not allow GlobalPost entry into the town’s only hospital, one wing of which had been shelled in recent months.

While speaking to merchants in Jaar’s central market, an elderly man with a long red beard asked GlobalPost, “Why American drones?” The sound of the drones buzzing overhead was a constant reminder, they said, of the strikes that could happen at any time.

Others in the region were less supportive of al-Qaida. Some said the group was simply exploiting Jaar’s destitute masses, who are clinging to any form of stability during a time of conflict and uncertainty.

For the United States, al-Qaida’s ability to control Jaar is a matter of national security and it’s military, with the cooperation of Yemen’s central government and national army, has responded in force.

Since December 2009, after a failed plan to detonate a bomb on Northwest flight 253 over Detroit on Christmas day was traced back to Yemen, the US military and the CIA are known to have carried out at least 21 missile strikes here.

The bulk of those strikes occurred in the wake of al-Qaida’s dramatic May 2011 takeover of Zinjibar, the provincial capital of Abyan, 35 miles from Aden, a major port city.

Within seven months of taking Zinjibar, militants captured three more cities — Shaqra, Rawdah and Azzan — bringing the total number of al-Qaida-style Islamic emirates to five and setting the stage for the now ramped up airstrikes. CIA Director David Petraeus said in September 2011 that the area had become “the most dangerous regional node in the global jihad."

Al-Qaida has responded with its own bombing campaigns.

Following the Feb. 25 swearing-in of President Abd Rabbo Monsour Hadi, who had replaced the 34-year rule of Ali Abudullah Saleh after a referendum-like vote, al-Qaida unleashed a string of bomb attacks across the country.

Hadi is tasked with leading the country through two years of democratic reforms, outlined in a Gulf Cooperation Council deal that eased the unpopular Saleh out of office. The controversial deal granted Saleh immunity for crimes he had committed against peaceful protesters at the height of Yemen’s pro-democracy movement.

The world's No. 1 oil exporter and Yemen’s neighbor to the north, Saudi Arabia, spearheaded the pact with the backing of Washington and the United Nations Security Council.

The three major powers brokered the agreement to calm anti-Saleh protesters and create an environment in which Sanaa’s divided government could reassert control over its southern territories.

“America aims to steal the fruits of the revolution,” read a statement translated by SITE intelligence group, which was released after Hadi’s inauguration. “America’s project in Yemen will never succeed . . . our operations will reach the American project and its tools . . . wherever they are.”

"We are unwaveringly resolved to keep up the fight against al-Qaida and we will chase them to every cache until they are eradicated, no matter what the cost is going to be," Hadi said, to the delight of his U.S. counterterrorism partners.

But Hadi is facing many more problems than just a resurgent al-Qaida. He is under mounting pressure to reform a military whose highest echelons remain largely in the hands of the former president’s family. And he is charged with turning around a broken economy and securing relief for a worsening famine amid rising food prices, as well as tackling separatist movements in the north and south that are unrelated to the conflict with al-Qaida.

“At this point,” Johnsen said, “it looks as though Yemen is going to be a broken and weak state where Islamist groups are able to thrive for some time to come. The US can either double-down on its current policy of bombing in the hopes al-Qaida doesn't attack it first, or the U.S. can completely revise its approach to Yemen and come up with a policy, which would include a strong counterterrorism component that would deal with all of Yemen's problems — not just al-Qaida.”