These executions date back to the 1800s.Trayvon is hardly the only recent victim whose murderer has gone unpunished 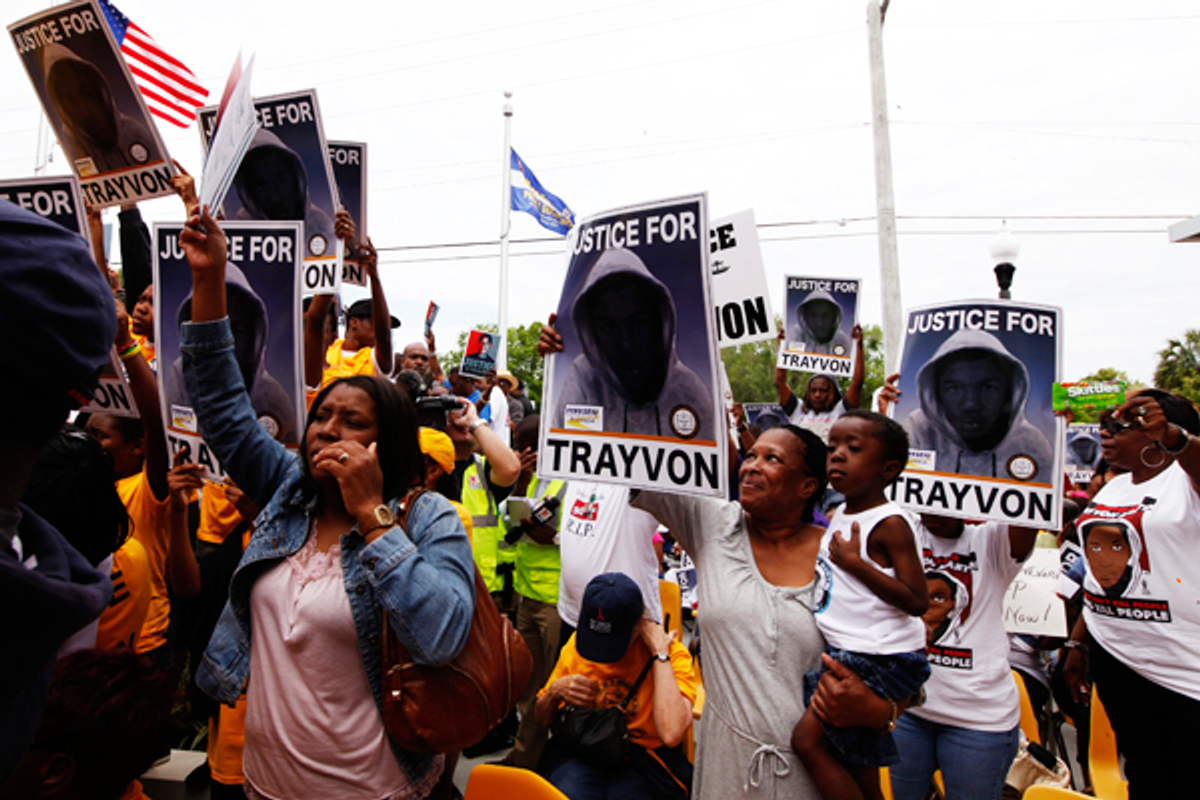 Demonstrators hold signs during a march to the front of the Sanford Police Department for Trayvon Martin in Sanford, Florida, March 31, 2012 (Reuters/Lucas Jackson)
--

At the Million Hoodie March, the name of Trayvon Martin was the first name on everyone's lips. But as the behoodied masses of mourners spilled into the streets of lower Manhattan, I heard other names, too, which joined Martin's in a litany of murdered children. As the names were spoken, sung, chanted and echoed through the city streets, the assembled remembered a history that was supposed to have been long forgotten.

Among the marchers, an elder woman could be heard crying, over and over, to any who would listen: "I'm tired! I'm tired! I'm just so tired!" For this woman and others I spoke to, the story of Trayvon Martin's murder remained freighted, not only with the weight of the Martins' unspeakable loss, but with the weight of a history too often left unspoken: above all, the long history of legalized murder extending from Judge Lynch all the way to George Zimmerman.

Extrajudicial "justice" came into its own in this country with the posse comitatus, the slave patrol and the Fugitive Slave Laws of the 19th century. It continued into the 20th with the lynch mob, the Vigilance Committee, the Citizens' Council and the Klan. And it lives on today in the citizens' patrol, the Minuteman militia, the Patriot movement — and your local precinct. For white-on-black violence has historically found willing perpetrators in police departments like Sanford, Fla.'s, as much as in private "neighborhood watches" like Zimmerman's.

Immigrants, too, have been targeted for extrajudicial execution, from the murder of 9-year old Brisenia Flores at her home in Arizona in 2009 to the fatal beating of Shaima Alawadi, an Iraqi-American mother of five, in a suburb of San Diego just last month. Since 9/11, waves of anti-immigrant violence have coincided with waves of raids and round-ups by federal, state, and local agencies. Such hate crimes have been concentrated in counties (like Suffolk, N.Y., and Maricopa, Ariz.) where law enforcement has been known to engage in rampant racial profiling.

Every surge in white-on-black and white-on-brown violence has followed a series of signs and signals, of winks and nods from lawmakers, law enforcement, and legal practitioners. The most obvious are the "Castle Laws" and "stand your ground" statutes, which legalize the use of lethal force by private citizens. Less obvious, but equally insidious, is the reign of impunity for police officers who shoot to kill. And those who seek some measure of justice find the police as unwilling to investigate white vigilantes as they are to hold their own officers to account.

The line between law enforcement and lawlessness has been blurred in the streets of our towns and cities. Take the case of 18-year old Ramarley Graham, who was executed, unarmed and in his own home, by members of the NYPD's Street Narcotics Enforcement Unit in the Bronx on Feb. 2, 2012. Or take the case of 22-year-old Rekia Boyd, who was shot dead in Chicago on March 22 by an off-duty police officer who claimed to be "standing his ground," like Zimmerman. Neither Graham's killer nor Boyd's has been charged with any crime at this time. Compare this treatment to that meted out to black police officer Howard Morgan, facing up to 80 years in prison after being shot 28 times by fellow officers and living to tell the tale.

When cases do go to court, it is the justice system that is invariably indicted. The officers who fired 50 shots into 23-year-old Sean Bell on his wedding day in 2006 were acquitted of all charges in 2008. Officer Johannes Mehserle, who pumped a bullet into the back of 22-year-old Oscar Grant on an Oakland subway platform in 2009, was released after serving half of a two-year sentence. Similarly paltry charges await the Detroit policeman who, with reality TV crew in tow, gunned down 7-year-old Aiyana Stanley-Jones in her sleep in 2010.

Here, then, lie the origins of vigilante violence in our times: a reign of impunity wherein the rule of law applies only to the ruled and the "tough on crime" crowd condones the very crime they purport to be fighting. This reign of impunity lends a veneer of legality to the private use of deadly force, bestows an aura of legitimacy on vigilante violence, and sanctions the paramilitary sensibility that has led so many white Americans to take up arms against their fellow Americans.

The recent record of the justice system testifies all too eloquently to the priorities that continue to guide its judgments: the priority of white life over black life, indeed of white property over black life, and of the liberties of white citizens over the rights of everyone else. Small wonder, then, that it is black youth who are disproportionately stopped, frisked, arrested, prosecuted, incarcerated — and, increasingly, executed, with or without a trial.