Pick of the week: Delirious college comedy "Damsels in Distress"

Pick of the week: Greta Gerwig shines as the misguided heroine of Whit Stillman\'s hilarious \"Damsels in Distress\" 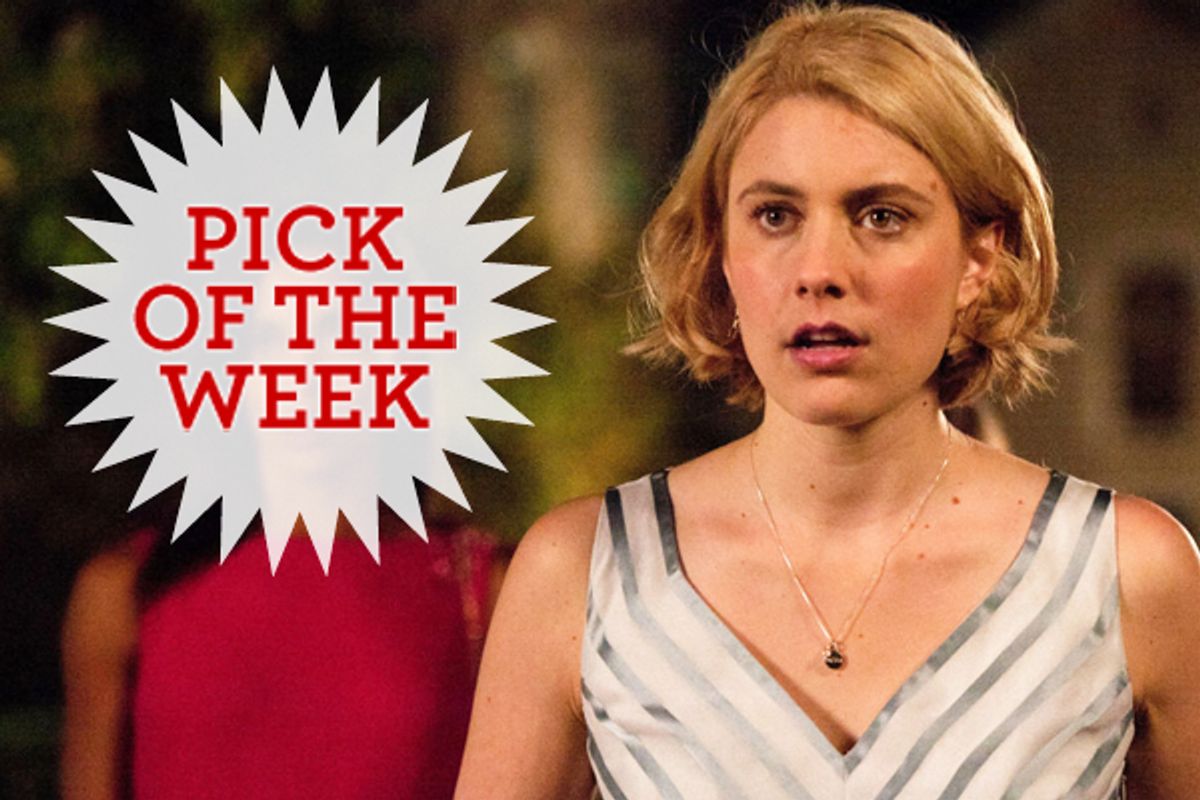 Greta Gerwig in "Damsels in Distress"
--

Violet Wister, the would-be campus reformer played by Greta Gerwig in Whit Stillman's weird, wacky and mostly wonderful college comedy "Damsels in Distress," arguably doesn't make much of a heroine. She's a veritable font of wisdom, which would be great except that nearly all of it is either factually wrong or extremely dubious. She heads a clique of undergraduate girls who seem alternately cruel and clueless. Her vaunted fashion sense mostly results in a fussy, awkward, ladylike demeanor that's something like a fifth-grader playing dress-up. But Violet has principles and lives by them, and for Stillman -- the chronicler of the Northeastern WASP elite's youthful eccentricities, who hasn't released a film since "The Last Days of Disco" in 1998 -- that matters more than anything else.

Much of the peculiar magic in "Damsels in Distress" comes from Gerwig, who gives a powerful and complicated performance as a young woman who's difficult to like or to trust, but who goes through a crisis and ultimately wins our admiration. (Violet is a companion in spirit to Chloë Sevigny's gawky heroine in "Disco.") But Gerwig's not alone in this potent ensemble piece. Violet comes with two sidekicks: the arch, intelligent and beautiful Rose (Megalyn Echikunwoke), and the confident, poised and sublimely stupid Heather (Carrie MacLemore). This trio is devoted to ridding the fictional but ancient Seven Oaks University -- an Ivy-esque liberal arts college somewhere on the Eastern seaboard -- of the lingering vestiges of male privilege, especially as manifested in poor hygiene and body odor. During freshman orientation, they seize upon a doe-eyed new arrival named Lily (Analeigh Tipton) as a fresh recruit to their cause. As Violet explains, these girls only date guys they think are far below their own level, "in that sympathetic zone of being not attractive and not smart," as part of a selfless effort to civilize them. It's a classic, rather broad war-of-the-sexes setup, with the women at the center -- but that tells you almost nothing about where this digressive, whimsical, silly and ridiculously fun movie is going.

When the sneering, leather-jacketed editor of the Seven Oaks daily newspaper accuses Violet of running a campus suicide-prevention center whose only therapy is tap-dance numbers, she's hurt and angry. "We're using the whole range of musical dance numbers which over many years have proven themselves effective therapies for the suicidal and hopelessly depressed," she retorts. That's complete nonsense, I guess, but it's the kind of nonsense that also encompasses an insight into the human condition. Violet's career ambition, after all, is not to work in a white-shoe law firm or a Wall Street investment bank or any of the other upper-crust fields that Seven Oaks graduates can reliably be expected to penetrate. As she tells her roommates, she wants to do something that will really change the course of human history: start a new dance craze. To many of us in this day and age, her quest will seem nobler by far.

So it is that "Damsels in Distress," which starts out as a mean-girls campus farce mixed with a few bits of "National Lampoon's Animal House," concludes with a hilarious music video for Violet's nonexistent and extremely complicated new dance, the Sambola. (I believe the name may carry a permanent exclamation mark: the Sambola!) Along the way there's a full menu of ridiculous delights that Stillman's fans will recognize, especially the odd combination of chatty, overeducated dialogue, pointed social and sexual satire, and unadulterated absurdity. Thanks to Lily's seductive grad-student boyfriend (Hugo Becker, of "Gossip Girl"), we learn about the unconventional erotic practices of the Cathar religion, still carried on in secret by adherents today. (There's at least a little historical basis for that one, surprisingly.) We meet a frat boy so dumb he doesn't know his colors -- no, he's not colorblind; he just doesn't know which one is which -- and a transfer student so naive she has never seen an artichoke or tasted balsamic vinegar.

A lot of the funniest moments in "Damsels in Distress" are things that cannot adequately be described, such as the way Echikunwoke, playing Violet's meanest and most intelligent lieutenant, repeatedly describes a guy she doesn't trust, in her Anglo-Nigerian accent, as a "playboy-operaTOR type." Or the wonderful scene in which that very guy, whose identity and status are in themselves a comic plot point (he's played by Adam Brody), explains to Violet his thesis on the decline of decadence and the downfall of homosexuality. Once upon a time, he says, being gay was "something refined, hidden, sublimated," that involved reaching for the heights of artistic expression, whereas now it's about muscular morons in T-shirts.

It's both a relief and a delight to discover that Stillman -- an Oscar nominee for his first script, "Metropolitan," way back in 1991 -- remains one of the funniest writers in captivity. Why hasn’t he made a movie in so long? Well, it's a long story, but as in most such cases it seems to boil down to not enough money and too much stupidity. (Lena Dunham, the star and director of "Tiny Furniture" and creator of the new cable series "Girls," apparently played an instrumental role in helping Stillman finally push this one through.) As the downfall-of-homosexuality scene demonstrates, Stillman is sometimes simply too damn smart for his own good. You can't always tell at whom he's poking fun, or why, and it becomes unfortunately easy to typecast him as the WASP answer to Woody Allen and conclude that his movies are insufferably irritating documents of privilege. He himself is aware of that possibility the whole time, and bastes his entire worldview in a rueful, ironic-romantic glaze.

Indeed, the entire effect of "Damsels in Distress" is also something that can't adequately be described. This movie defies all current conventions about how movies are supposed to be made: It's too talky, too smart (when it's not being willfully dumb), too long and 100 percent chaste. There is no nudity and no profanity; even the conversations about Cathar-style lovemaking are purposefully prudish. It takes place in an imaginary version of the present, with characters who speak in long, literate sentences, entirely free of contemporary slang. (Information-age gizmos are seen to exist, but play no role in the story.) To some extent, the plot is just an excuse for the movie to gradually turn into a musical, one that features tap dancing, and an Astaire-and-Rogers-style ballroom number. Oh, and the Sambola. Sorry: Sambola!

Maybe you could argue that this old-fashioned fable about the mating dance between young women and young men, crowded with seemingly retrograde stereotypes and staged inside an elite bubble, offers some wry sideways commentary on what has changed in gender relations (and what has not). But I wouldn't oversell that angle. "Damsels in Distress" is deliberately and purposefully irrelevant; its irrelevance is its strength. It's zany-in-quotation-marks and also flat-out zany. I laughed until I cried, and you may too (if you don't find it pointless and teeth-grindingly irritating). Either way, Whit Stillman is back at last, bringing his peculiar brand of counterprogramming refreshment to our jaded age.

"Damsels in Distress" opens this week in Los Angeles and New York, with wider release to follow.