The New Yorker documents ample material support from the U.S. to MEK: A clear felony if true 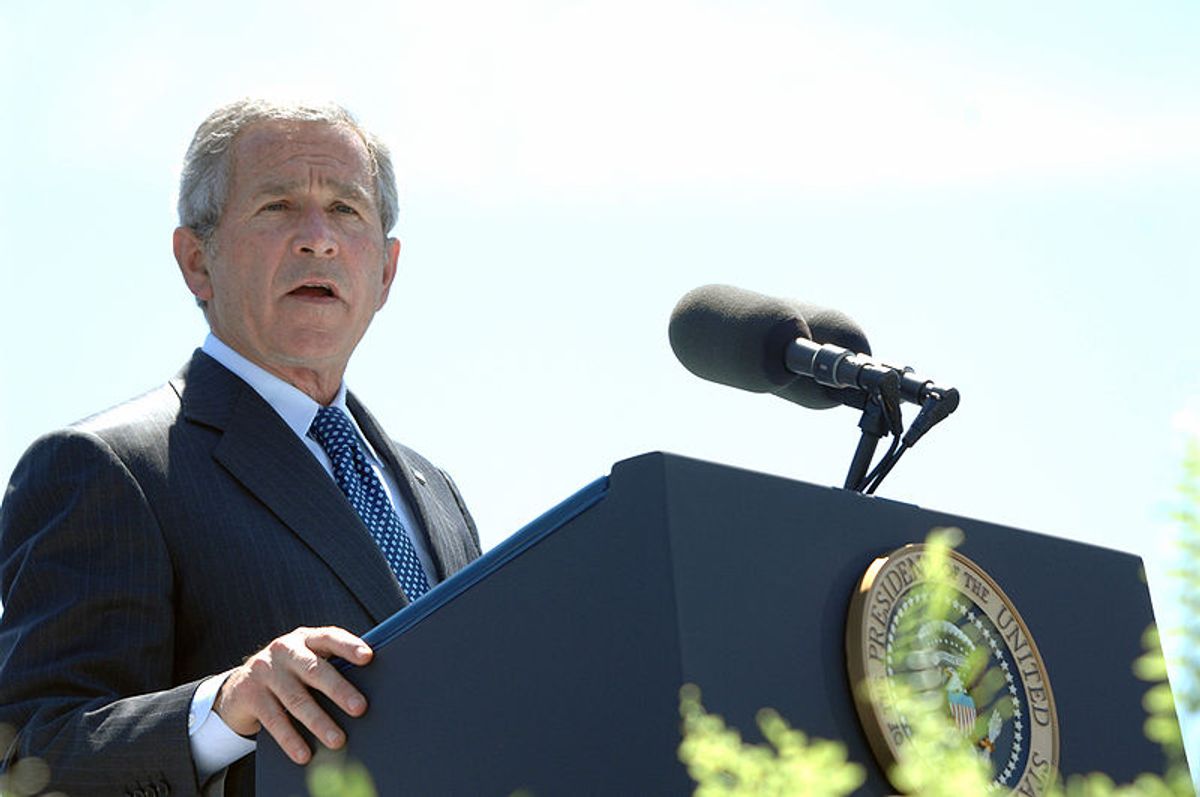 When the U.S. wants to fund, train, arm or otherwise align itself with a Terrorist group or state sponsor of Terror -- as it often does -- it at least usually has the tact to first remove them from its formal terrorist list (as the U.S. did when it wanted to support Saddam in 1982 and work with Libya in 2006), or it just keeps them off the list altogether despite what former Council on Foreign Relations writer Lionel Beehner described as "mounds of evidence that [they] at one time or another abetted terrorists" (as it has done with close U.S. allies in Saudi Arabia and Pakistan, along with the El Salvadoran death squads and Nicaraguan contras armed and funded in the 1980s by the Reagan administration). But according to a new, multi-sourced report from The New Yorker's Seymour Hersh, the U.S. did not even bother going through those motions when, during the Bush years, it trained the Iranian dissident group Mujahideen-e-Khalq (MEK) at a secretive Department of Energy site in Nevada:

It was here that the Joint Special Operations Command (JSOC) conducted training, beginning in 2005, for members of the Mujahideen-e-Khalq, a dissident Iranian opposition group known in the West as the M.E.K. . . . The M.E.K.’s ties with Western intelligence deepened after the fall of the Iraqi regime in 2003, and JSOC began operating inside Iran in an effort to substantiate the Bush Administration’s fears that Iran was building the bomb at one or more secret underground locations. Funds were covertly passed to a number of dissident organizations, for intelligence collection and, ultimately, for anti-regime terrorist activities. Directly, or indirectly, the M.E.K. ended up with resources like arms and intelligence. Some American-supported covert operations continue in Iran today, according to past and present intelligence officials and military consultants.

Despite the growing ties, and a much-intensified lobbying effort organized by its advocates, M.E.K. has remained on the State Department's list of foreign terrorist organizations -- which meant that secrecy was essential in the Nevada training. "We did train them here, and washed them through the Energy Department because the D.O.E. owns all this land in southern Nevada," a former senior American intelligence official told me. "We were deploying them over long distances in the desert and mountains, and building their capacity in communications -- coördinating commo is a big deal."

A JSOC spokesman told Hersh that "U.S. Special Operations Forces were neither aware of nor involved in the training of M.E.K. members," but a MEK lawyer refused to confirm or deny the report, arguing that any such training would undercut the U.S. Government's claims that MEK belongs on the Terrorist list.

In February, NBC News' Richard Engel and Robert Windrem reported, based on two anonymous "senior U.S. officials," that MEK was the group perpetrating a series of "sophisticated" assassinations of Iranian nuclear scientists (using bombs and rifles). NBC also reported that Israel -- specifically its Mossad intelligence service -- is " financing, training and arming" MEK: in other words, that Israel is a state sponsor of this designated Terrorist group. Various reports have also indicated that the MEK, with Israeli support, was responsible for a string of explosions on Iranian soil. Hersh obtained independent confirmation of all these claims:

The former senior intelligence official I spoke with seconded the NBC report that the Israelis were working with the M.E.K., adding that the operations benefitted from American intelligence. He said that the targets were not "Einsteins"; "The goal is to affect Iranian psychology and morale," he said, and to "demoralize the whole system -- nuclear delivery vehicles, nuclear enrichment facilities, power plants." Attacks have also been carried out on pipelines. He added that the operations are "primarily being done by M.E.K. through liaison with the Israelis, but the United States is now providing the intelligence." An adviser to the special-operations community told me that the links between the United States and M.E.K. activities inside Iran had been long-standing. "Everything being done inside Iran now is being done with surrogates," he said.

Whoever knowingly provides material support or resources to a foreign terrorist organization, or attempts or conspires to do so, shall be fined under this title or imprisoned not more than 15 years, or both, and, if the death of any person results, shall be imprisoned for any term of years or for life.

That alone compels serious DOJ and Congressional investigations into these claims. Worse, this reportedly happened at the very same time that the U.S. aggressively prosecuted and imprisoned numerous Muslims for providing material support for groups on that list even though many of those prosecuted provided support that was far, far less than what the U.S. Government itself was providing to MEK. Meanwhile, right at this moment, America's closest ally -- Israel -- is clearly a state sponsor of this designated Terrorist organization, providing training, funding and arms to it, and the U.S. may very well be as well (independent of all else, given that Israel is the largest recipient of U.S. aid, the U.S., at the very least, is financing a state sponsor of Terror).

At the same time, a glittering bipartisan cast of former Washington officials is receiving large payments from this designated Terrorist group, meeting with its leaders, and then advocating on its behalf -- again, providing far more material support than many powerless, marginalized Muslims who have been and continue to be prosecuted under this law. All of this appears to be clearly criminal regardless of whether MEK belongs on the list -- once a group is placed by the State Department on the list, whether justifiably or not, it is a felony to provide material support to it -- but MEK appears to be doing exactly that which is typically considered Terrorism: assassinating civilian scientists (and severely wounding their wives) with bombs and causing other civilian-killing explosions on Iranian soil in order to induce fear.

In the above-linked LA Times Op-Ed by CFR's Lionel Beehner, he derides the U.S. list of state sponsors of terrorism as "one of the biggest farces of U.S. foreign policy." Indeed it is, but that's equally true of the pervasive, righteous use of the term "terrorist" or "terrorism supporter" in our political and media discourse generally. Anyone in government, media and think tank circles who routinely and angrily accuse others of being "terrorists" or "supporters of terrorism" without recognizing that the U.S. and its closest allies are plainly and routinely guilty of that is just a rank propagandist. That the U.S., in the midst of its vaunted War on Terror, directly trained a group on its own Terrorist list -- while its closest ally and Washington's venerated former officials continue to provide ample support to that group even as it escalates its violent acts -- is about as conclusive a demonstration of that fact as one could have conjured.

I'll be speaking at various events next week, all open the public -- in Ottawa on Thursday, April 12; at the University of Chicago on Saturday, April 14; and in Washington D.C., on Sunday, April 15.

UPDATE: As L.Boogie notes in comments, the law that criminalies the providing of "material support" to a designated terrorist organization explicitly includes in its definition section exactly that which The New Yorker reports the U.S. gave and perhaps continues to give to MEK:

(b) Definitions.— As used in this section—

(1) the term “material support or resources” means any property, tangible or intangible, or service, including currency or monetary instruments or financial securities, financial services, lodging, training, expert advice or assistance . . .

I know that, in light of recent American history, it's easy to forget this, but U.S. government officials -- whether current or former -- are no more entitled to commit felonies and violate U.S. statutes than any other citizens are.