Republicans just don't get it

As the GOP continues to repel women voters, can you blame President Obama for opening his arms to greet them? 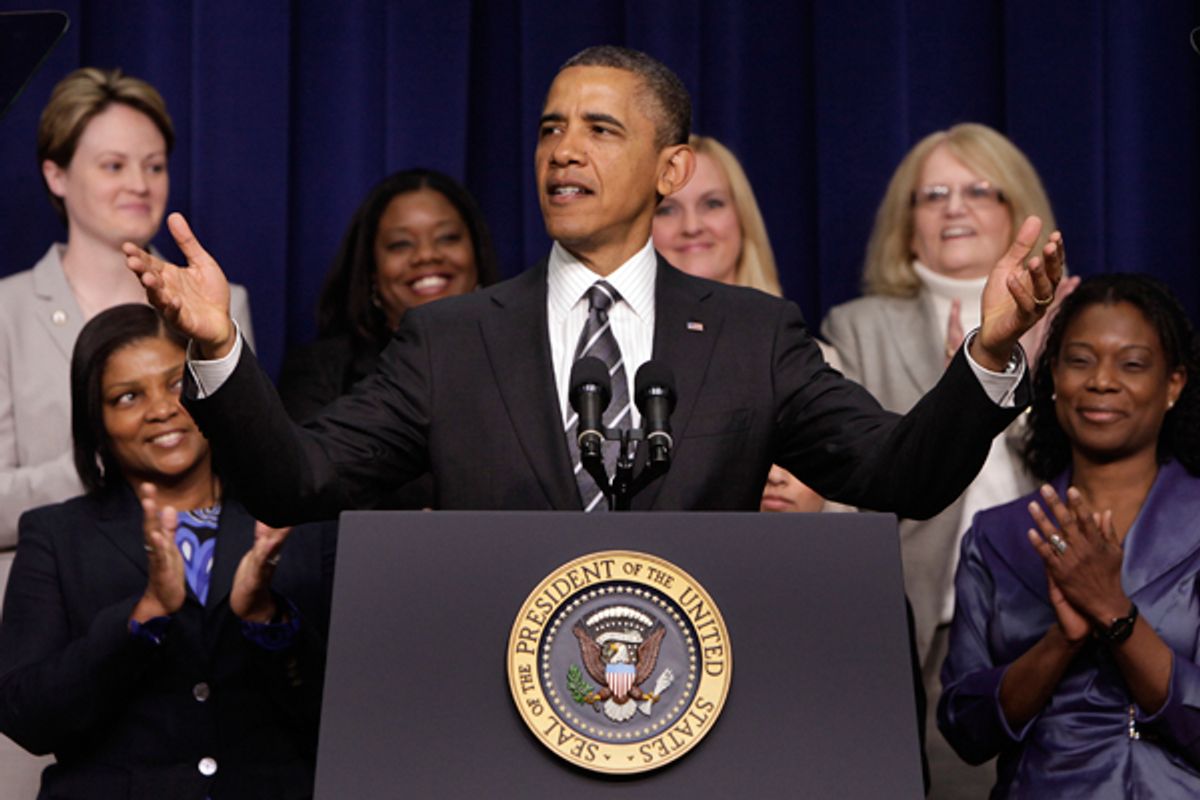 President Obama greets the audience at the White House Forum on Women and the Economy on Friday. (Reuters/Yuri Gripas)
--

Just as Mitt Romney was making the case to Newsmax, that paragon of journalistic integrity, that the so-called Republican war on women is entirely concocted by Democrats, Republican Scott Walker was quietly signing a law that repealed Wisconsin's Equal Pay Enforcement law, which made it easier for women to seek damages in discrimination cases. Driven by state business lobbies, the repeal passed the GOP-dominated Legislature on a strict party line vote, and Walker signed it, with no comment, Thursday afternoon.

President Obama, meanwhile, was hosting a White House summit on women and the economy Thursday. Predictably, Republicans howled that the president is merely courting another "interest group" and playing politics. There was no doubt some politics at play during the summit; at one point participants chanted, "Four more years!"

But really, when Republicans are repealing equal pay laws and proposing federal budgets that disproportionately hurt women, as well as restricting funding for contraception, who's playing politics with women's issues?

When GOP poster boy Scott Walker is repealing equal-pay protections for women, why shouldn't Obama remind us that he signed the Lily Ledbetter Equal Pay Act? Since the Ryan budget repeals "Obamacare"  and slashes Medicaid and Medicare – both of which disproportionately serve women -- is it unfair to talk about how the Affordable Care Act provides cost-free contraception, preventive care like mammograms and Pap smears, and outlaws charging women more for insurance?

Yes, it's an election year, so everything the president does will be scrutinized for its political agenda. That's fine. But I continue to find it hilarious that Republicans insist that their troubles with women are the fault of nasty Democrats. Contraception aside, they're the ones cutting programs for women and repealing equal pay protection. To Newsmax, Mitt Romney again complained that Democrats are distorting the GOP position on contraception. And again I say: Democrats didn't crusade to defund Planned Parenthood. Democrats didn't introduce personhood legislation that would outlaw certain types of contraception. They didn't propose the Blunt amendment that would have allowed employers to deny insurance coverage for contraception as well as any health care treatment they don't approve of.

I wrote the other day that concern about contraception isn't the only issue driving the GOP's widening gender gap.

But a recent USA Today poll found that women in swing states say their number one issue is women's health care (men say deficits and the economy), and that makes an interesting point: Women see contraception as an integral part of their overall health care – as it is. We know that most women who use the pill, for instance, use it for a health reason other than contraception only. Republicans are the ones fetishizing birth control and putting it outside the boundaries of women's health care.

Mitt Romney and the GOP just don't get it. Everything about the way they're approaching these issues is backfiring.

I'll be discussing all of this on MSNBC's "Hardball" with Republican Ron Christie at 5:30 ET.