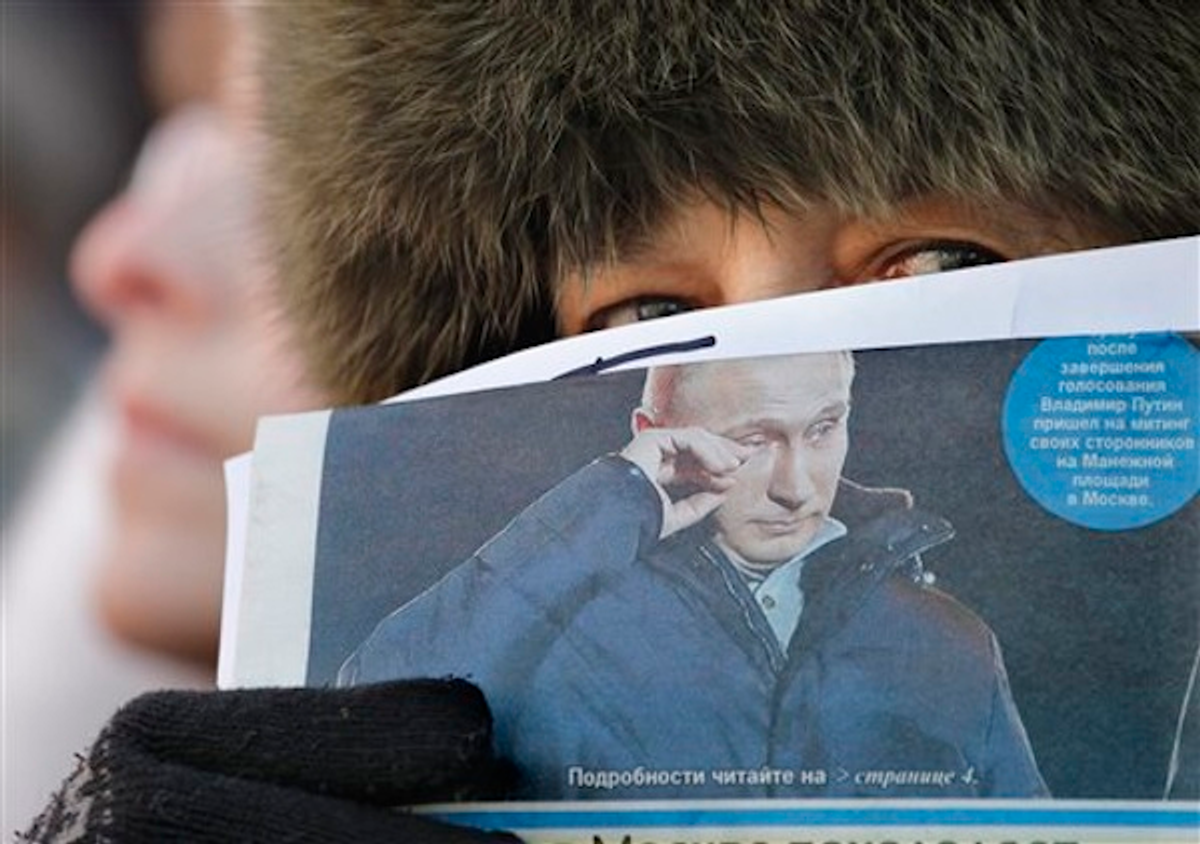 After a brief period of freedom in the 1990s, president-elect Vladimir Putin has largely cracked down, and kept up pressure, on independent media during his first two terms as president in 2000 and 2004. The last 12 years saw a decline of independent press and critical journalism in Russia. Today the main television channels and many news outlets are either majority owned by the state or Kremlin insiders.

Press freedom grew under President Dmitry Medvedev. Last year’s reforms included demoting libel to a less serious crime and increasing jail terms for assault on journalists. But, as after each major event in Russia since 2000, a crackdown on independent media followed the Dec. 4 parliamentary elections, which sparked mass rallies all over Russia over alleged fraud.

The government maintains that Russia's press is free.

“Freedom of the press is guaranteed and provided in this country,” Putin’s press secretary Dmitry Peskov said. The policy toward the media will continue after Putin officially becomes president — again — on May 7, Peskov said.

However, Pulse’s recent troubles underscore the costs of criticizing the government.

Pulse may be evicted from the building it has occupied for the last two decades because of violations in radio frequency technologies, Sklyarov said. If the regional court of arbitration finds his internet company guilty of licensing violations later this month, Pulse will lose a major source of its funding.

Sklyarov admits to infractions, but said that they are minor and long-standing. He connects the inspections with his decision to change programming and monitor the election.

To draw attention to the pressure, Sklyarov has spoken at an anti-government rally in Moscow and has been in touch with Medvedev’s administration. Despite a phone conversation with an unnamed official from the Kremlin and a request from Mikhail Fedotov, the head of the Presidential Council for Civic Society and Human Rights, to look into the sudden rash of inspections, local government continues to pursue its investigation of Pulse.

While independent outlets and journalists in Russia’s regions face more pressure than their counterparts in Moscow, the capital's news outlets are also coming under scrutiny.

At the station, the move, which gives a majority to Gazprom appointees, is seen as a “crooked” attempt to control editorial policy, deputy chief editor Sergei Buntman said.

The announcement came after Putin criticized the station for “pouring diarrhea” all over him “from morning to night.” Echo of Moscow, which is often critical of the government, featured extensive coverage of opposition leaders and anti-government protests after Dec. 4.

“I understand that the initiative [for the reshuffling] did not come from Gazprom Media, but from higher political authorities,” Echo chief editor Alexei Venediktov said in a statement published on the station’s website.

Nikolai Senkevich, the president of Gazprom Media, said the decision was prompted by “increased attention” to the station from “all different sides” and the dismissal of the independent directors was a necessary change, Russian news service Ria Novosti reported.

Other recent incidents include an investigation into funding of opposition channel Dozhd, the freezing of funds for opposition newspaper Novaya Gazeta, a dismissal of an editor from the respected Kommersant newspaper after publication of a photograph of a defaced election ballot, and police beatings of several journalists covering anti-government protests.

In January, Russia’s Union of Journalists, an organization thought to be controlled by the Kremlin, appointed a new director for the Center of Extreme Journalism, a group that monitors freedom of press violations in Russia. The new director was one of the center’s analysts and has previously worked in the administration of Russia's first president, Boris Yeltsin.

The members of the center’s staff saw the new director as a government functionary and viewed his appointment as an attempt to control the organization, said Irada Guseinova, a former analyst at the center.

The entire staff of the Moscow office and affiliates in the CIS quit as a sign of protest.

“It all looks good on paper,” Guseinova said. The union has the right to appoint directors for the center, a subordinate organization. “But [in this environment] what’s the point of monitoring?”

While the government cracks down on the independents, it has shown an uncharacteristic openness in policy and state-run television channels.

A law that facilitates registration of political parties is about to pass. Earlier this week, Natalia Morar, a Moldovian-born journalist who wrote about state corruption in Moscow's New Times magazine was allowed back into the country after being refused entry for four years. Putin proposed to create a “speaker’s corner” where everyone can come and speak their mind, modeled after London’s Hyde Park.

For the first time ever, the “stop-list,” or an unofficial list of people not allowed to be broadcast, that includes government opposition and is usually decided by a channel's top officials, seems to have been lifted.

Television had to adapt to the demands of the people, said Alexander Morozov, the head of the Center for Media Studies, a Moscow think tank.

“It is impossible to hide what’s happening in the country,” Morozov said.

However, Gos Dep, a political talk show aired in February on Russian MTV and hosted by celebrity "It-girl" Kseniya Sobchak, was cancelled after just one episode for what many say was Sobchak's decision to bring Alexei Navalny, a popular blogger and anti-corruption activist, on the next show.

"Navalny is just not allowed on television," Morozov said.

NTV, also owned by Gazprom Media, has recently broadcast a series of reports, accusing the opposition of receiving money from the United States. The reports, largely thought by analysts, journalists, opposition and many Russians, to be smear documentaries ordered by the government, led to a rally protesting the reports, and a mass boycott of the channel.

Medvedev’s proposal to create a public broadcaster has been revived. The bill introduces public television and radio, with minimal government involvement, and programming aimed to create a civic society and inspire the viewer to be a better citizen, the Presidential Council's Fedotov, who is heading the project, said.

“The channel will make the viewer morally cleaner, inspire him to vote, recycle,” Fedotov said. Medvedev will pick the channel’s founders from a group nominated by the Presidential Council and the Public Chamber, seen as largely subordinate to the Kremlin.

However, at least some of the channel's funds will come from the state budget, Fedotov said. For many, this casts doubt on the project's claims of independence from the government. Other issues up for debate include competing with other channels for viewers and the broadcaster’s educational functions.

Television is a source of information, not mass education, Echo’s Buntman said. After decades of Communist rule, with only a brief period of relative media freedom, a strong, independent press is not a tradition in Russia. Forming this demand through public television is total nonsense, Buntman said.

“This understanding won’t magically emerge from public television,” Buntman said. “It will only emerge in a competitive media atmosphere, where each outlet will try to compete with the other for accurate coverage of events.”

Buntman doubts the broadcaster won't be controlled by the Kremlin.

"What if someone will decide there is too much negative information?" Buntman said.

The question on everyone’s mind is, what will happen after Putin’s inauguration on May 7.

The future of media depends on what political course Putin will take, either to try to work with everyone or take the nationalistic, patriotic line, Morozov said. It is possible that Putin will not pressure the media because he does not have any reason to be nervous, since he faces little criticism from abroad, Morozov said.

What looks like new media liberalization is temporary, said Aleksey Simonov, the president of Glasnost Defense Foundation, a nonprofit organization that monitors violations against press. After Putin's inauguration, the Culture Ministry will become responsible for media, now under the jurisdiction of the Communications Ministry, Simonov said. All three choices for the new minister in charge of media are heads of three state-run television channels, according to Russian news reports.

Although the inspections and, what Sklyarov calls “assault” on Pulse, has not stopped, on Tuesday Sklyarov won the first of two cases against his internet company in the local court.