With its hysteria over Obama and the courts, the right continues to attack a president who doesn’t actually exist 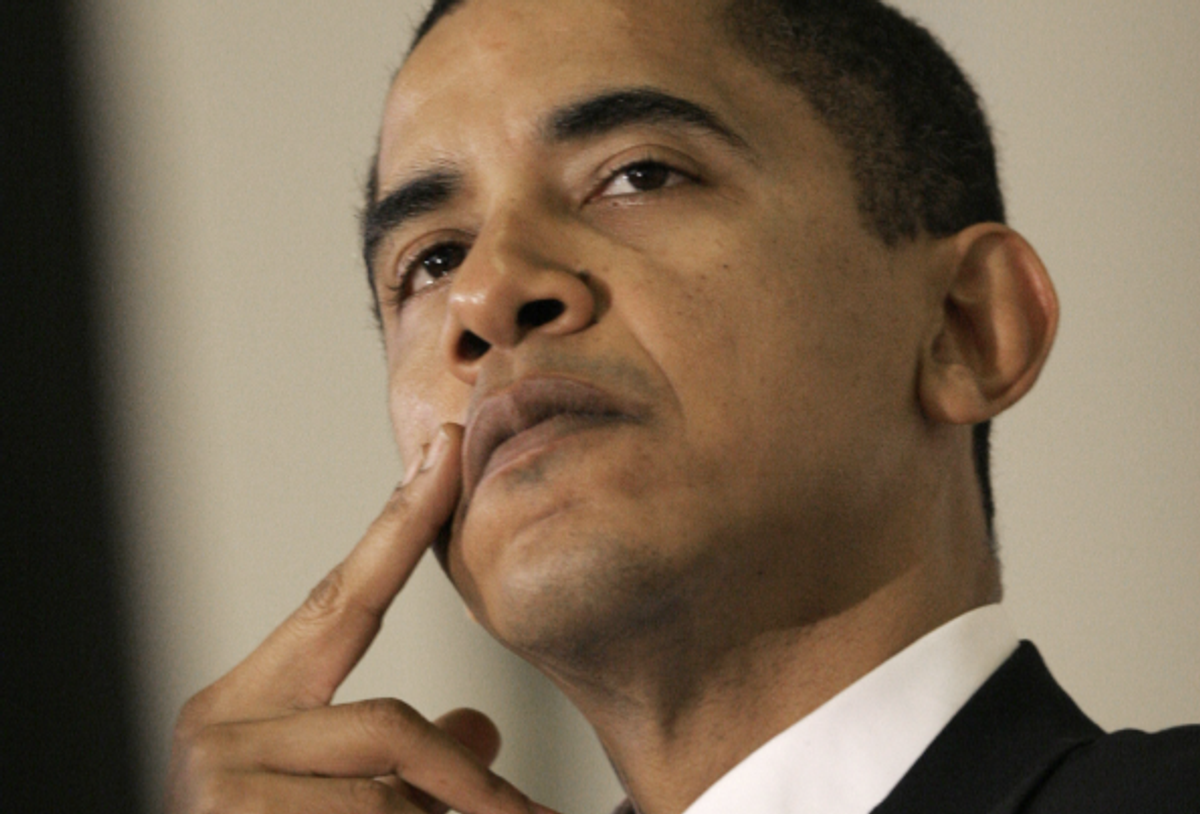 The talking point has taken hold on the right: President Obama has radically overstepped the bounds of the presidency by challenging the legitimacy of the federal judiciary. This is not what Obama has actually done, of course. The president, in very calm and subdued remarks at a Rose Garden event on Sunday, expressed confidence that the Supreme Court will uphold his healthcare law and won’t

take what would be an unprecedented, extraordinary step of overturning a law that was passed by a strong majority of a democratically elected Congress. And I’d just remind conservative commentators that for years what we’ve heard is, the biggest problem on the bench was judicial activism or a lack of judicial restraint — that an unelected group of people would somehow overturn a duly constituted and passed law. Well, this is a good example. And I’m pretty confident that this Court will recognize that and not take that step.

A day later, as the conservative uproar took root, Obama acknowledged that it wouldn’t be entirely “unprecedented” for the court to throw out the healthcare law and stressed that he wasn’t questioning the court’s authority:

The point I was making is that the Supreme Court is the final say on our Constitution and our laws, and all of us have to respect it, but it’s precisely because of that extraordinary power that the court has traditionally exercised significant restraint and deference to our duly elected legislature, our Congress. And so the burden is on those who would overturn a law like this.

But that didn’t stop Karl Rove from saying earlier this week that Obama is “acting like some sort of political thug at the White House, threatening the Supreme Court.” It didn’t stop Mitch McConnell from declaring that “the president crossed a dangerous line this week. And anyone who cares about liberty needs to call him out on it.” And it didn’t stop Mitt Romney from saying that Obama’s actions prove that he “will say anything, will attack any institution, will distort the truth with reckless abandon, and in this case in a way that I think is terribly disrespectful of one of the branches of our government."

It also didn’t stop a Republican-appointed federal appeals court judge, Jerry Smith of the 5th Circuit, from demanding that the Justice Department provide him with a three-page, single-spaced letter stating whether the administration believes in judicial review. The requested letter, signed by Attorney General Eric Holder and affirming that “the power of the courts to review the constitutionality of legislation is beyond dispute,” was delivered on Thursday.

The right’s outrage is revealing for a few reasons. First, as many have already pointed out, there’s no shortage of hypocrisy at work. Hysteria over unaccountable “activist” federal judges has been a staple of conservative messaging for decades. It was just a few months ago that Newt Gingrich was railing against the “extreme behavior” of the federal court and claiming that the president and Congress have the power to ignore the judiciary. Attacks on “judicial lawlessness” were also one of George W. Bush’s favorite campaign tools.

Then there’s Judge Smith’s willingness to join and amplify the conservative pile-on. The idea that members of the federal judiciary aren’t immune to partisanship probably isn’t jarring to most people anymore. But Smith’s odd, demeaning homework assignment to the administration had a whiff of something worse: partisan hackery. It felt, as Jonathan Bernstein wrote, like a textbook demonstration of the “conservative information feedback loop, in which Republican party actors get all their information from conservative media and from talking to each other, leading them to give credence and even legitimacy to the wildest of false claims.”

But beyond this, what we’ve really seen this week is another demonstration of the right’s dedication to fighting a president who doesn’t actually exist. This has been the story from the start of Obama’s presidency. His policy decisions and rhetoric have been marked by pragmatism and incrementalism, often to the frustration of his own party’s base, but the conservative response has invariably been to treat him like a crude caricature of unhinged leftism.

Among other things, Obama met the demands of centrists on his stimulus package, put together a public option-free healthcare plan that employed Republican principles and strengthened private insurers, held on to many Bush-era national security policies, oversaw mass deportations of illegal immigrants, and routinely invoked “American exceptionalism.”

But the dominant conservative line doesn’t grapple with any of this; in the right’s telling, the president is a far-left ideologue who is ashamed of America and apologizes for it to other countries, hates free enterprise, wants to guarantee equal outcomes for all Americans, executed a “government takeover” of healthcare, and has some kind of black radical past. The response to his Supreme Court comments is a perfect example of the invented hysteria that defines much of the opposition to Obama.

It should go without saying that Obama’s record as president deserves and demands scrutiny and criticism. But to the right, dealing with this record is too tedious. It’s easier to run against a straw man.