President Obama has fought hard to ease the student-debt burden, but Republicans threaten his fragile gains 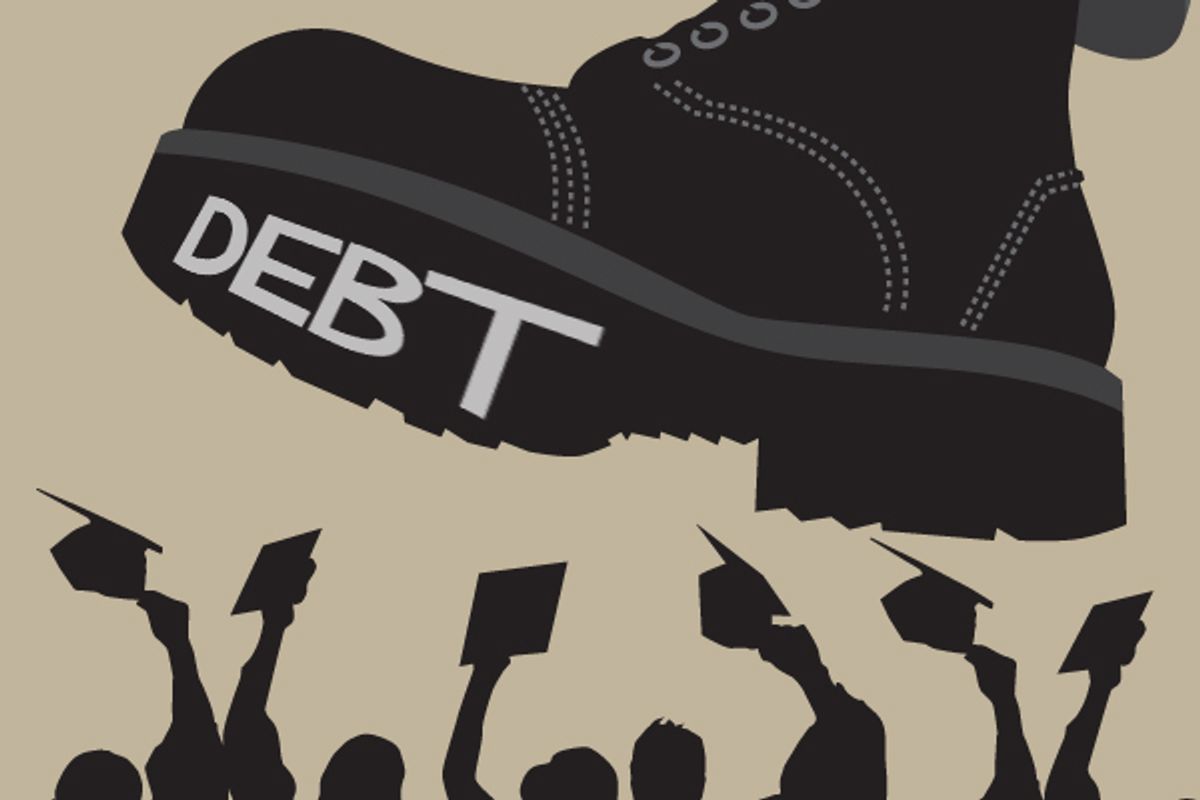 When there are Americans whose Social Security checks are being garnished to pay off their outstanding student loan debt, then it is clear that the United States has a problem. And the rising number of seniors who haven't paid off loans taken out decades earlier is only one of several reasons to be alarmed by a report on student loan debt released by the Federal Reserve Bank of New York in March.

Total debt, as of the end of the third quarter of 2011, had reached $870 billion, a number, the Fed was quick to point out, that eclipses what Americans owed on their credit cards and on their auto loans. According to a more recent report from the Consumer Financial Protection Bureau (CFPB), the amount currently owed on both federal and private student loans has already broken the trillion-dollar barrier.

That's not just bad for the people struggling to pay off their debt -- people who, according to CFPB student loan ombudsman Rohit Chopra, are being punished for "doing exactly what they were told would be the key to a better life." The burgeoning debt numbers also pose a growing threat to the larger economy: money spent paying back student loans is money that isn't stimulating overall economic growth. Who will dare risk becoming a first-time home-buyer, for example, or buy a new car, when still struggling to pay back thousands of dollars on their education?

The Fed and CFPB reports launched a new round of well-deserved hand-wringing about the student loan "crisis." But one of the things that makes this crisis different from previous financial disasters -- like, for example, the subprime mortgage debacle -- is that it actually hasn't been ignored. In fact, you can make a good argument that the Obama administration has tackled the student loan crisis vigorously from the get-go, and achieved some signal triumphs, even while being ferociously opposed by Republicans at every single step of the way. Judging the overall success of Obama's efforts is tricky -- it may take many years for Obama's reforms to make a dent in the overall quantity of outstanding debt -- but there is little question that the White House is trying, and that for some students, at least, it has become easier to pay the bills.

The story of how President Obama has worked to help borrowers pay off their student loan debt and ease the path to affording a college education is a case study in how the current administration has worked to fix a broken system in the context of a political process that makes achieving any kind of progressive change almost impossible. And it also illustrates how the hard-won successes already achieved are extremely vulnerable. If, for example, Republicans take control of the White House and the Senate this November, and follow up by implementing the agenda outlined in Rep. Paul Ryan's proposed budget, the impact on struggling student loan borrowers will be severe. One of the few fronts on which the Obama administration can claim to have made real progress would suddenly turn into yet another retreat.

The story begins in July 2009, when Education Secretary Arne Duncan announced a number of changes to how the federal student loan program operates. Interest rates on existing student loans were cut almost in half, from 6 percent to 3.4 percent. More important, Duncan introduced a new way of paying back loans, called "income-based repayment." Previously, student loan borrowers had to pay back a set amount each month, regardless of how much they were earning. Under the new system, borrowers only had to pay 15 percent of whatever income they were making, and if, after 25 years, they still hadn't paid off their loan, the remaining debt was written off.

The Obama administration doesn’t deserve primary credit for those changes, however. The new rules were part of the implementation of a law passed in 2007 during the George W. Bush administration, the College Cost Reduction and Access Act. But it's probably worth noting that that law -- the brainchild of liberal California Democrat George Miller -- was passed by the Democratically controlled Congress that came into power in 2006 and was initially opposed by a majority of Republicans in both the House and the Senate. It might also be worth noting that back in 2005, when Republicans held power in Congress, and forced through a major revamping of the nation's bankruptcy laws, a little-noticed-at-the-time provision ensured that private sector student loans could no longer -- except under extreme circumstances -- be discharged as a result of a bankruptcy declaration. This blatant handout to the private student loan industry set the template for what was to follow: Democrats have tried to make it easier for borrowers to cope with their debts, while Republicans have worked to make it more difficult.

The next major step, for which the Obama administration deserves a large amount of credit, came in the form of a major revamp in how the student loan industry operated, passed into law in March 2010 as part of the Affordable Care Act. Prior to reform, about 65 percent of federally backed student loans originated from the private sector, with the government guaranteeing the loans against the default. The system resulted in rampant corruption -- loan companies paying off college financial aid administrators -- and was savaged by critics as an expensive government handout to the private sector. By cutting out the middle man and converting all federally guaranteed student loans to direct loans administered by the government, the Obama administration ending up saving an estimated $68 billion -- money that was then used to pay down the deficit and help fund a top Obama education priority, the significant expansion of the Pell Grant program.

Republicans screamed bloody murder -- attacking the reforms as a "Washington takeover" of the student loan industry -- a criticism echoed recently on the campaign trail by Mitt Romney, who described Obama's student loan reforms as a "government takeover." It was an assault that never made much sense, as the industry would not have existed without the federal guarantees and ended up costing taxpayers more than a government-administered program. But with Democrats in control of both the House and the Senate, the GOP couldn't stop it. And advocates working in the higher education sector generally gave the reform good marks, even while noting that there was much work to be done: "For students and families, this is all good news," Lauren Asher, president of the Berkeley, Calif., think tank the Institute for College Access and Success, told Bankrate.com, at the time of the bill's passing.

After the midterm elections, further legislation to address burgeoning student loan debt -- such as Sen. Richard Durbin's, D-Ill., efforts to once again allow student loans to be discharged in bankruptcy hearings -- became politically unfeasible. Indeed, at least one Republican presidential candidate, Rick Santorum, even called Obama a "snob" for encouraging the very idea that more Americans should go to college. But the White House continued to seek creative new ways to lower the student-debt burden. In October 2011, as part of his "We Can't Wait" initiative, Obama announced an expansion of the income-based repayment program. Now borrowers would only have to pay 10 percent of their income, and the debt would be forgiven after 20 years instead of 25. The Department of Education also announced that borrowers who had taken out different kinds of federal loans would be allowed to consolidate them all together into a single payment plan with lower interest rates. Again, Republicans protested, complaining that Obama's measures would encourage "increased borrowing across the board."

And finally, the Consumer Finance Protection Bureau, a centerpiece of the Dodd-Frank bank reform act that Obama fought for against extraordinary GOP resistance, has made it abundantly clear that policing bad practices in the private loan industry will be a high priority of the new agency.

Taken in sum, the Obama administration has been consistent in its efforts to ease debt repayment, boost financial assistance to low-income Americans seeking a college education, and crack down on abuses in the student loan industry. As a result, many holders of student loans should be able to lower their payments, although some education activists say it's not clear that many Americans are taking advantage of things like the income-based repayment mechanism. But perhaps the most worrisome element to consider about the reforms is how tentative they are. In fact, the tide could start turning in the opposite direction as early as this summer. On July 1, the interest rate break included in the 2007 College Cost Reduction and Access Act expires, and the current Republican-controlled House has shown no interest in funding its extension. The recently released Ryan budget also calls for the repeal of Obama's expansion of the income-based-repayment program. As a result of the various budget and debt ceiling showdown battles of the last two years, the Pell Grant program has been steadily whittled down ever since its initial stimulus-bill-funded expansion. Indeed, Ryan's budget would move Pell Grants from mandatory spending into the discretionary spending category, making it even easier to shrink the program in the future.

Of course, Republicans have an easy explanation for their opposition to expanding the Pell Grant program, forgiving student debt and keeping interest rates low on student loans: We can't afford it. And there is some truth to that. If revenue increases are off the table, then the problem of how to pay for low loan rates, while at the same time providing expanded financial assistance, does become acute. But that just raises, once again, the question of priorities. We know, without any question, that college education translates into higher incomes. But the current Republican Party, by its own actions and rhetoric, has made it abundantly clear that protecting lower taxes for the wealthy is more important than ensuring that as many Americans as possible can get a good college education without consigning themselves to a lifetime of onerous debt. In contrast, Obama, working under the constraints of a system that allows him almost no freedom to operate, has consistently enacted reforms that relieve the pressure of that debt, and help ease the way to higher education. If that's snobbery, if that's a "government takeover," then maybe we need more elitist big government, and not less.