The "NGOs" that spooked Egypt

History shows that the country is right to regard some U.S.-backed aid organizations warily 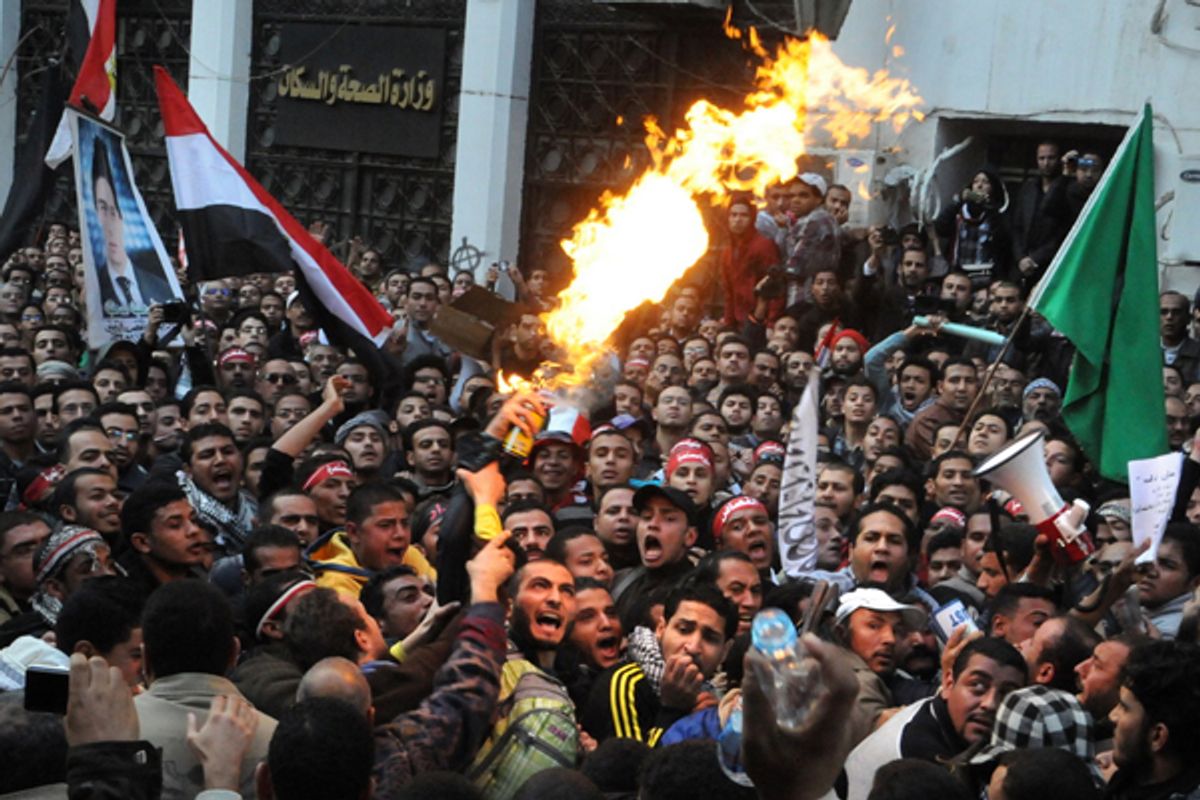 Cairo and Washington breathed a sigh of relief last month when Secretary of State Hillary Clinton approved military aid to Egypt. But their hopes for the future proved to be wishful thinking, as Egypt asked Interpol this week to issue red notices for the arrest of six Americans whom the Egyptians accuse of illegally stirring unrest. The Americans are all employees of three ostensibly private groups that Washington funds “to promote democracy” in Egypt and other countries. The State Department paid as much as $5 million in bail for the defendants, all of whom had to pledge to return for subsequent court proceedings. They did not do so, which legally makes them fugitives.

Washington is currently pressing Interpol to deny Egypt’s request, even as other countries in the region regard the American NGOs with suspicion. The United Arab Emirates has just banned one of the American groups, the National Democratic Institute (NDI), and a similar group from Germany, the Konrad Adenauer Foundation. Observers are waiting to see if other countries will issue similar bans.

These attacks – and Washington’s effort to downplay any official role in the supposedly nongovernmental organizations (NGOs) – call into question American efforts to promote change in other countries. They also fuel long-standing suspicions that stem from the earliest days of the Cold War. A little history explains much of the present crisis.

Back in the day, the CIA secretly funded, sometimes created, and often ran supposedly private, nongovernmental organizations to make propaganda and provide cover for covert operations all over the world. The compromised groups included the Congress for Cultural Freedom with over 60 publications and an international news service, the European Movement, and France’s anti-communist trade union federation, Force Ouvrière, which worked closely with the legendary labor activist and CIA operative Irving Brown.

Inherently unwieldy and dependent on the willingness of too many people to turn a blind eye, the elaborate apparatus began to come apart in the late 1960s, undermined by growing opposition to the Vietnam War. Ramparts magazine (for which both of us subsequently worked) and other newly alert media exposed the agency’s use of private foundations, including the Ford Foundation, to channel government funds to a long list of CIA favorites. Congressional investigations led by Sen. Frank Church and Rep. Otis Pike revealed even more, creating what many in the foreign policy establishment saw as a void.

To fill it, the Reagan administration and a bipartisan majority of Congress created the National Endowment for Democracy (NED) in 1983. The new law stipulated that NED would work largely through three newly created “core grantees” – the Center for International Private Enterprise (CIPE), International Republican Institute (IRI) and National Democratic Institute (NDI) – and the AFL-CIO’s Free Trade Union Institute, which had a long history of working closely with the CIA.

Would the CIA continue to run the new apparatus under cover of the State’s Department’s “democracy bureaucracy?” It certainly looked that way in November 1985, when the Center for Investigative Reporting teamed up with the French daily Liberation to reveal that NED had secretly intervened against France’s socialist President Francois Mitterrand. As confirmed by the New York Times, NED gave $833,000 to Force Ouvrière and $575,000 to the right-wing National Inter-University Union, which the original exposé described as “the student arm of a banned paramilitary organization linked to political bombings and assassinations.” NED passed the money through the Free Trade Union Institute (now the Solidarity Center), and the AFL-CIO official handling the grant in Paris was the 74-year-old Irving Brown.

“We’re defending democracy in France,” he told the Los Angeles Times, which reported that the right-wing student group had plastered Paris with posters attacking Mitterrand. When the story broke, the U.S. Embassy in Paris denied any U.S. government role.

Flash forward to the present. Both IRI and NDI claim to be private and independent of the U.S. government. But both receive Congressional funding through the Endowment and directly from the State Department and U.S. Agency for International Development. According to their websites, IRI gets less than 1 percent of its funding from private donors, while NDI gets some additional funding from private foundations as well as multilateral organizations and foreign governments, from the U.K. and Germany to Yemen and Namibia.

Freedom House, the third NGO facing charges in Egypt, appears marginally less dependent on taxpayer money. According to its latest available financial report, the U.S. government provided over 75 percent of its funding. But its independence remains suspect. To cite only one example among many, the Financial Times reported in 2006 that Freedom House was “one of several organizations selected by the State Department to receive funding for clandestine activities inside Iran.” Freedom House confirmed the funding for activities in Iran, but declined to give details.

So what did these not exactly nongovernmental organizations do in Egypt? We put the question to one of their staunchest and most knowledgeable defenders, who asked to remain unidentified. Mostly the “NGOs” provided information to various Egyptian groups on how best to prepare themselves to participate in the various elections, he explained. Much of this information came from the experience of political groups all over the world.

Did the three “NGOs” provide this information to groups affiliated with the Muslim Brotherhood? Yes, they did, and our source considered the collaboration extremely beneficial.

Did the three “NGOs” report back what they learned while working in the field? No, said our source, “they do not do political intelligence work for the embassy.” They are, he insisted, “exactly what they say they are,” by which he meant pro-democracy and nongovernmental.

Will Egyptians – and Americans – believe that a U.S. government-funded “NGO” does not share information with U.S. officials or take its marching orders from them? For many, it’s a hard sell given the nearly 70 years in which the U.S. government and its intelligence agencies have made covert use of real and purpose-built “civil society” groups.

Even more troubling, these government-backed NGOs only cast suspicion on truly nongovernmental groups like Amnesty International and Human Rights Watch, and put at the risk the Egyptians and others who work with them. How pro-democratic is that?

But old habits die hard, and the faux NGOs  -- even if they are not doing intelligence work -- give Washington insight into, contacts with and a degree of leverage over formerly suppressed segments of Egyptian society that are now demanding a voice in who governs their country and how. These include everyone from Islamic groups like The Muslim Brotherhood to the nonviolent activists and computer nerds that Washington helped train and equip.

Does this mean, as many critics allege, that Washington tried to make a revolution in Egypt?

No, that’s much too simplistic. Washington continues to give far more support to old allies in the Egyptian military. From the State Department, CIA, Pentagon brass and military intelligence agencies to “pro-democracy’ NGOs, allied European groups like the Adenhauer Foundation, and various business and professional contacts, the U.S. has a finger in nearly every pie and tries, often without success, to use them all to promote whatever the White House perceives to be American interests in Egypt.

Like it or not, this is how Washington plays the game, and the wholesale meddling will continue unless and until the Egyptians truly decide they would rather run their own country their own way. In an Internet age, the tired tricks of the Cold War will increasingly blow up in Washington’s face, whether in Cairo, Havana or Tehran.