George Zimmerman identifies as Hispanic, but pollsters lump Latinos with whites when asking about the controversy 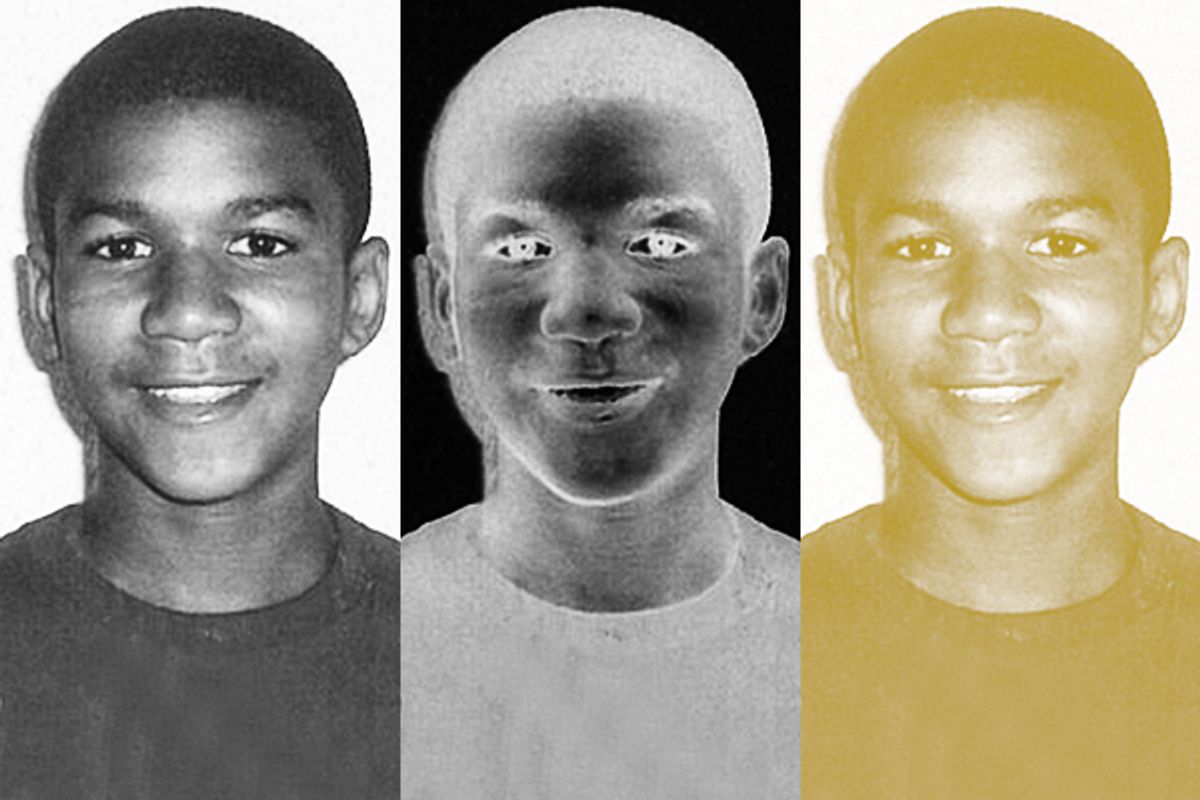 When the Gallup poll reported Thursday that "blacks" and "non-blacks" have very different views of the Trayvon Martin case, I started to get suspicious. Why were the views of Hispanic people lumped in with white people in the "non-black" category? Their opinions would seem central to the story of ethnically driven perceptions. George Zimmerman's mother is Peruvian. According to his family, the man who killed Trayvon Martin has always identified himself as Hispanic. It's not like the pollsters, who contacted 3,000 randomly chosen Americans, didn't talk to a lot of people of Latin American descent.

In my experience -- and a recent Pew poll confirms -- these non-white, non-black Americans don't care for the U.S. government's categories of "Hispanic" (which suggests someone from Spain) or "Latino" (a U.S. neologism that is unknown in Latin America). About half of them consider themselves to be very different from the typical American, according to Pew. And just one in five say they use the term “American” most often to describe their identity. In other words, pollsters may lump Hispanics with whites but these people (including my wife and son) clearly do not consider themselves "white" in the same way that, say, Sean Hannity does.

Yet major news organization do.  As reported the Detroit Free Press, the Gallup poll found

73% of black people said they think George Zimmerman would have been arrested if Trayvon was white; only 33% of white people agreed. The majority of white people polled -- 52% -- said race made no difference in the way the case was handled.

This invocation of "white people" made me more suspicious. By journalistic alchemy, all of the non-blacks interviewed by Gallup had been transformed into "white" Americans — even though a significant portion of them do not describe themselves that way.

When I saw a Pew poll on the Trayvon Martin case that seemed to show the same racial divide, I became outright incredulous.  Pew found that:

African Americans are far more likely than whites to say they are closely tracking news about the Florida teenager’s death. Fully 58% cite news about Trayvon Martin’s killing as their top story, compared with 24% of whites. Moreover, 43% of whites say the story has received too much coverage, compared with just 16% of blacks.

But what about the views of Hispanics? They were heard. The methodology statements of Pew and Gallup both state that they conducted interviews in Spanish when necessary.  But they were not reported. In transforming data into a story line, the media only reported the "black" and "white" perspectives. What might be called the "brown" perspective was wholly obscured.

I asked the pollsters why. Pew told me that it had interviewed 1,000 people, including 732 non-Hispanics and 109 non-Hispanic blacks, meaning it also polled 159 people who didn't fall into those categories. Of those 159 people, Pew told me that 64 identified themselves as Hispanic, with the remainder classifying themselves as Asian or Pacific Islander, Native American/American Indian, mixed race, or other or refusing to answer.

"Only the sample sizes for non-Hispanic white and non-Hispanic black were large enough to be meaningful," Pew told me.

The collective viewpoint of Hispanics and others who don't identify as white or black wasn't "large enough to be meaningful" — even though they were more numerous than the African-Americans whose views were reported. It's hard to think of a more clear-cut example of how the American media "privileges" the political  narratives of blacks and whites over those of Americans who are neither.

Gallup also acknowledged it had collected information on the Hispanic perspective on the Trayvon Martin case that it had not seen fit to report publicly. On its website, Gallup says it interviewed 3,006 people, including 2,334 non-Hispanic whites and 242 blacks. When I pressed for a breakdown, Gallup said it had interviewed 239 Hispanics. Note the numbers: While the Hispanic sample was virtually the same size as the African-American sample, Gallup did not regard the Hispanic viewpoint as worth reporting either in its release to the media or online.

Gallup did provide the data when I asked, and the numbers show that Hispanics view the case rather differently from both blacks and whites.

For one thing, Hispanics are less interested in the story. Only 16 percent of Hispanics were following the story compared to 52 percent of blacks and 19 percent of "non-blacks." However, Hispanics also tend to view the details of the case more similarly to black people than other "non-black" respondents. They are more likely than "non-blacks" to think Zimmerman would have been arrested if the person he shot was white (40 vs. 35 percent) and less likely than "non-blacks" to think that Martin's race "did not make a difference" (37 vs. 49 percent). And these figures understate the Hispanic-white differences because the Hispanics' views were included in the "non-black" totals.

At the same time, Latinos do not share the prevalent African-American judgment of Zimmerman. Only 16 percent think he is definitely guilty of a crime, compared to 51 percent of blacks.

You could say that the gap in opinion between black Americans and non-Hispanic white Americans is actually greater than what the media has reported. That would support the narrative of racial polarization. But you could just as plausibly say that blacks and Latinos are more likely to agree on the Trayvon story than blacks and whites, a rather different story line that is  less familiar and flattering to the liberal media.

What the pollsters and the media have missed is the large group - -at least as large as the African-American community -- that is somewhere in the middle. While Hispanics are much more personally sympathetic to Zimmerman than black people, they're also more likely than whites to agree that race played an important role in Martin's death.

There is no suggestion here that Gallup and Pew pollsters are "racist" or that they intentionally discriminate against Latinos (or that they are, as right-wing conspiracy theorists may claim, seeking to suppress evidence of Latino support for Zimmerman).   While white conservatives seem, as Alex Pareene has pointed out, baffled by "the idea of white Hispanic people," Gallup and Pew seem baffled by the idea that many Hispanics may not consider themselves white. The pollsters,  like a lot of people,  have not fully absorbed the diversity of America in 2012. The inability to think of Hispanic public opinion as equal to black and white opinion is a significant conceptual error. But it is not an uncommon one.