"Game of Thrones" is filled with strong female characters that -- surprise! -- have lots to say about modern sexism 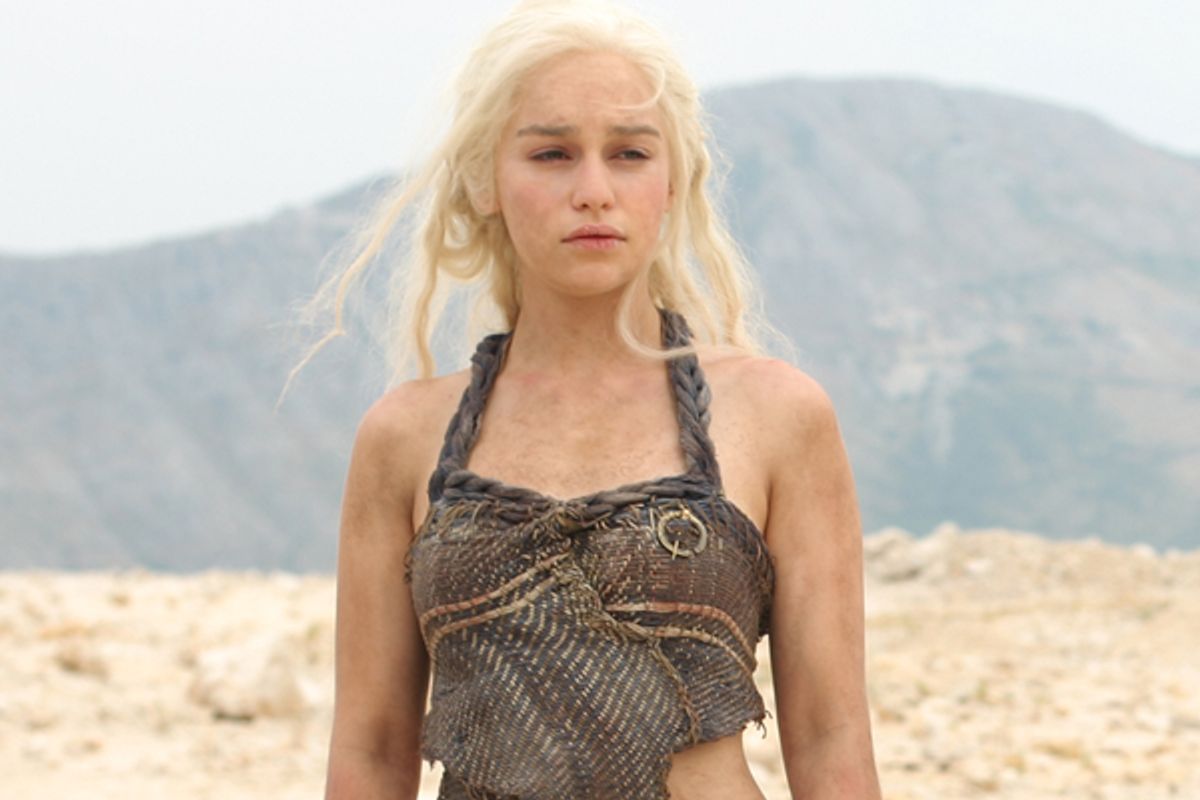 Emilia Clarke in "Game of Thrones"
--

The second season of HBO's “Game of Thrones,” which premiered last Sunday, is based on a novel — the second in an ongoing saga — called “A Clash of Kings.” But fans of the bloody, battle-scarred show know that’s a misnomer: There are more than a few queens throwing down in this brawl — not to mention a passel of noblewomen, priestesses, grizzly mamas, and badass, sword-wielding soldiers of the distaff variety.

This may be the Year of the Sitcom Woman, but the biggest, most vibrant group of women on TV today can be found in a brutal, self-serious war drama set in a made-up medieval world — just the kind of story, it so happens, that’s often assumed to be the sole dominion of dudes.

For George R.R. Martin, the novelist who created this world in his “Song of Ice and Fire” series, the medium is the message. The things that make the story so daunting and so off-putting to some — its sheer massiveness and its huge cast of characters — are part of what makes it so thrilling to me, as a woman who likes to see other women on-screen. It’s not just that the women in “Game” are strong — and the primary females are, in both figurative and literal senses — but that there are so goddamn many of them, each one fighting to exercise power over the world and her own life. They’re far from a sisterhood (one of the main themes of the show is that trusting others is a rube’s game) but as a collective, they make an unavoidably huge impression.

Fantasy stories, like all genre narratives, are built on archetypes, and “Game of Thrones” seems to leave no trope of feminine power unexplored. There are mothers, like the noblewomen Catelyn Stark and Cersei Baratheon, who are driven by their fierce, lioness-like love for their children. There are a wide variety of warrior princesses and any number of women who use their sexuality to get ahead. There are at least two witchy women (mysticism being a kind of power reliably granted to female and minority characters): Mirri Maz Duur, the Lhazareen who uses “blood magic” to destroy her people’s conquerors, and Melisandre, the priestess who brings a fiery new religion to Westeros and becomes the force behind a fearsome army in the process. These women don’t always win the games they’re playing — they get slapped down as brutally and as often as the male characters do — but they sure know how to fight, week after week.

In a way, “Game of Thrones” reminds me of that other big Sunday night drama: “Mad Men.” In both of these large, multi-character shows, the women are constantly defining themselves against, and through, rigid societal constraints. The stakes are higher in “Game of Thrones”: Many of the major female characters have been or are poised to be traded in marriage, like human chess pieces, among the Great Houses of Westeros, and sexual violence is an ever-present threat. But both shows feature a number of very different women, who we’re invited to read against one another and whose primary relationships are nearly always with men — a condition that’s shaped partly by the setting and partly by the writers’ narrative choices. And on both shows, everyone knows it’s each woman for herself.

In “Game of Thrones,” we’re treated to myriad strategies for how to make it in a man’s world. In Season 1, viewers met Daenerys Targaryen, a teenage girl who was given by her slimy older brother to a burly barbarian warlord, and who has since gone from a passive, victimized child to an awkward but passionate and often forceful ruler. (Add another trope to the mix: the I-found-strength-from-my-trauma woman.)

Both slimy brother and burly husband are gone by the time Season 2 begins, as is the son who, it was prophesied, would grow up to be “the stallion that mounts the world.” (He arrived stillborn and deformed at the end of last season.) Even with the world’s only living dragons at her side, it seems likely that Daenerys will, again and again, have to prove herself worthy of ruling. “They don’t like the idea of a woman leading a khalasar,” her male advisor tells her in Episode 2 of this season, after a rival tribe sends her the decapitated head of one of her riders. Whatever you think about the casting of Emilia Clarke, the lovely Brit who plays Daenerys (personally, I vacillate), it’s fun to watch her learn how to access the queenly yawp inside her.

The second and third episodes of this season bring us two warrior women who are both familiar to anyone who’s read Martin’s epics: Yara Greyjoy (known as Asha Greyjoy in the books) and Brienne of Tarth, who add a new female trope to “Game of Thrones” while deepening the show’s engagement with questions of female strength and of male-female dynamics.

Yara is one of two surviving children of Balon Greyjoy, a minor lord whose rebellion for independence was brutally put down by King Robert nine years before the action of the show. In this Sunday’s episode, [mild spoiler alert] Yara’s younger brother Theon returns to their homeland — a bleak, salt-stained outpost known as the Iron Islands — after having spent more than half of his life as a ward of Ned Stark, the king’s closest supporter, in the relatively glamorous northern kingdom of Winterfell. (If you’ve watched Season 1, the comparison should give you as sense of just how grim the Iron Islands really are.) Theon expects to receive a hero’s welcome when he arrives. In Winterfell, he was a boy without a father and thus, without rank; on the Iron Islands, Theon will finally be a son and heir.

“They say hard places breed hard men,” Theon says, with a boy's overweening pride, to a ship-girl just before he screws her. “And hard men rule the world.” (No one said “Game of Thrones” was especially subtle in its deployment of penis humor.)

But instead, Theon finds that while he’s been gone, his cocky sister has become the hard young man of the Iron Islands. Yara doesn't just sexually one-up her swaggering little brother (in a scene that plays like an outtake from a particularly filthy Shakespeare comedy); she usurps his place at his father’s side. Yara has commanded men and killed them; unlike Theon, she would never wear jewels she hadn’t "paid the iron price" for — i.e., liberated from fresh corpses she's made. When the Iron Islands eventually head to war, Balon tells a sputtering, incredulous Theon that Yara will command a fleet of 30 ships. Theon will get one. Its name? The Sea Bitch. “We thought she’d be perfect for you,” his sister smirks. The Yara/Theon scenes play a bit like a fantasy version of a high-school sports drama, with the football field swapped out for a battlefield. "But ... but ... you can't let her play, coach, she's a GIRL!" (Theon actually yells something like this at his father, as Balon and Yara make fun of his sissy clothes.)

Brienne of Tarth, on the other hand, couldn’t muster a smirk if her life depended on it. The martial maid, a major character whom we meet in Episode 3, cuts a striking figure on-screen: stolid, lumbering, able to bring down one of the finest knights in the realm with a charging body tackle. As played by the 6-foot-4 Gwendoline Christie, Brienne comes off as a little priggish, a little too invested in the postures and poses of knighthood, as if trying to compensate for both her ungainly body and the fact that she’s a woman.

Whereas most of the women in “Game of Thrones” orbit around their lovers or the men in their families, Brienne has eyes only for her gay, or at least bisexual, king, Renly Baratheon. “You fought bravely today, Lady Brienne,” says a positively shrimpy-looking Catelyn Stark after witnessing the aforementioned throwdown. “I fought for my king,” Brienne says stiffly. “Soon I’ll fight for him on the battlefield. Die for him, if I must.”

Behind the proud, out-thrust chin, you can sense the romantic zeal that drives Brienne. In her eyes, dying for her king would be a fitting consummation to their relationship. The women’s brief exchange ends with a terse correction from the newly minted member of Renly’s personal guard: “If it please you, ‘Brienne' is enough. I’m no lady.” Christie delivers the last line, which could have been a clunker, in a way that’s satisfyingly difficult to parse; I can’t tell if she’s ashamed to say that out loud or disgusted that she has to bring up her sex at all.

Brienne would be an arresting character no matter what story she appeared in. But it’s the fact that she’s just one of a multitude of rich, sharply drawn female characters that makes her — and the show — so compelling.

“Game of Thrones” persuasively demonstrates why some of us are always yammering on about the need for increased representation of women (and minorities) on television: Through the relatively simple process of upping the numbers, the burden on any individual woman magically lightens. No single character in “Game of Thrones” has to be the show’s final word on womanhood, and that’s a freeing prospect. I can find Melisandre a dinner-theater-esque take on the sorceress archetype; you can find Daenerys an appalling victim of untreated Stockholm syndrome. But it’s OK. With the women of “Game of Thrones,” you don’t have to put all your dragon eggs in one basket.

Nina Shen Rastogi is a writer whose work has appeared in Slate, the Washington Post, the International Herald Tribune and Vulture, where she recaps "Game of Thrones." She is the head of content at Figment, the online reading and writing community for teens and young adults.