A most disturbing "Mad Men"

Recap: In a nightmarish episode, a woman from Don's past returns -- and Joan discovers a big secret 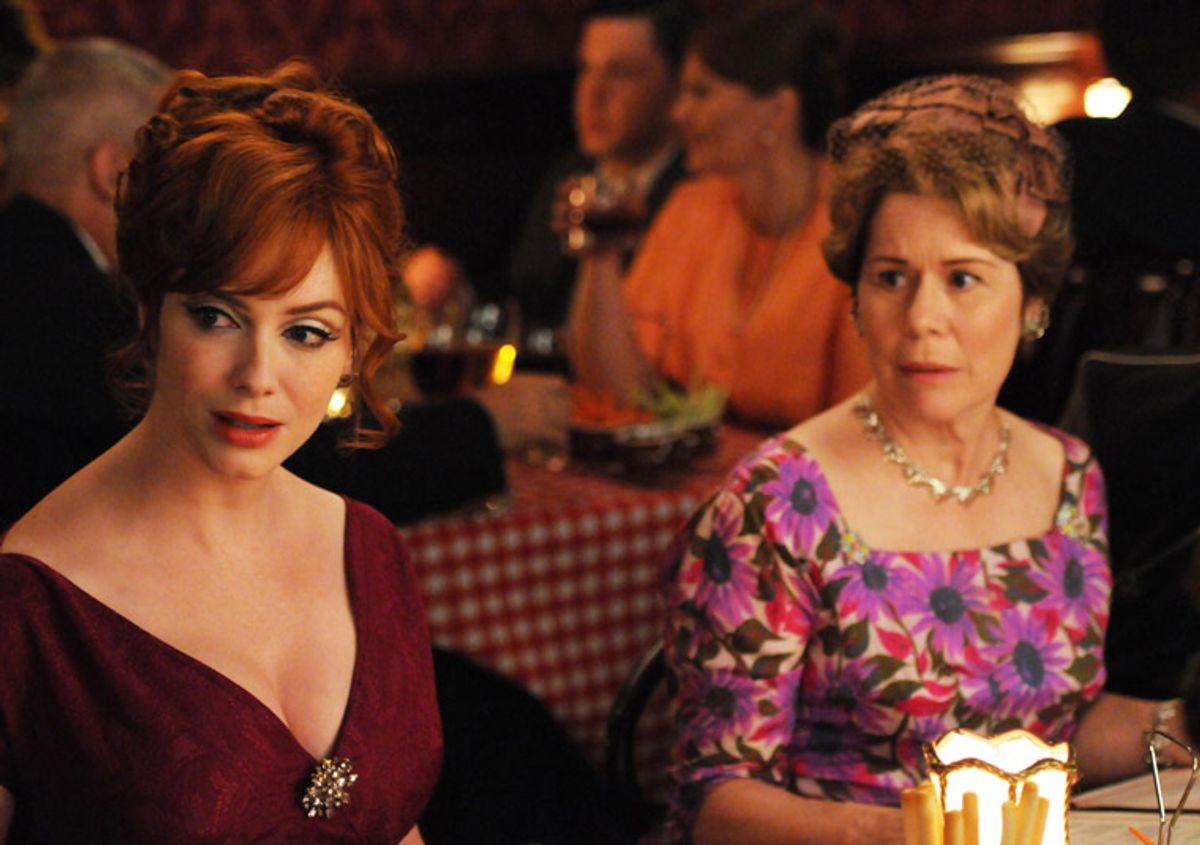 Nelle Engoron recaps "Mad Men" every week on Salon. She is the author of "Mad Men Unmasked: Decoding Season 4."

Research into abusers and killers suggests a strong link between those two fears, with violence often triggered by feelings of humiliation and powerlessness. Both genders see the power to destroy as resting in the other’s hands – those hands that you may want to hold, or hands that may want to hold you, either lovingly or violently.

All of these fears are portrayed in “Mystery Date,” which may rank as the most disturbing episode ever of “Mad Men.” The dark side of the fairy tale of American life and of American marriage has been a constant theme of the series, and in this spooky house of an episode, various characters play Sleeping Beauty, only to wake up safely back in the brighter world (at least we hope that Sally will, once that Seconal wears off).

Our nightmare in shining amour, Don, feels his happy second marriage threatened by the specter of his past when he and Megan run into Andrea, a plaything from the Betty years. Andrea calls Don her “bad penny,” but she’s the one who keeps turning up in a sick Don’s fever dream. As if put under a spell, Don thinks that Andrea’s pursuing him, turning up at his apartment and refusing to leave even when he says she’ll wish she’d jumped off the balcony if his wife catches her (thus displacing his violent feelings onto a woman, one who took the male role earlier when she was “embarrassed” at Don’s “careless appetite” for sex). In a symbolic return of the repressed – those dark desires he’s tried to turn away from – Don’s nightmare Andrea both seduces and threatens him until he must strangle her and push her dead body under his marital bed, leaving only a red high heel behind, as if she’s a bloody Cinderella.

Don may be a psychic killer rather than a psycho killer, but this glimpse of his hostility toward women feels real, especially given the anger and rough treatment we’ve seen in the past (toward Bobbie Barrett and Betty). Yet in Don’s view, it’s women’s anger that’s to be feared – Megan’s about both his past and possible future infidelity – as well as the humiliating taunt that he places in Andrea’s mouth, about how sick he is (and not in a viral way). “Think you’ll be safe over there by yourself,” Don joke-taunts Megan when she backs away from his coughing. Being by himself  -- alone with his often-repellent feelings and memories – is clearly something Don fears.

The real woman under the bed is not dead, but the lone survivor of the horrific nursing student murders committed by Richard Speck in Chicago, an event that fills both headlines and heads throughout this episode, just as it did in real life. (Like Sally, I read about those killings as a child and felt so afraid I could barely sleep for weeks. I didn’t actually crawl under something to sleep like she does, but I often thought about it.) In the mid- to late 1960s, killers became truly serial, a recurring nightmare of American life. That slaughter of eight student nurses was followed by other horrific murders that were sensationalized by the media, creating a morbid fascination with the grisly details and making Americans feel that crazy killers were lurking around every corner. Worst of all, these killers were no longer professional criminals, but the “quiet guy next door” types -- neighbors who were revealed to have a secret homicidal life (a transformation suggested by Stan jokingly putting the pantyhose over his head like a criminal).

As with Don’s dream, victimhood keeps getting displaced in the episode. Ginsberg, who’d earlier been the only one to find the crime scene photos “disgusting,” nevertheless pitches the footwear clients a campaign that puts the consumer in the self-justifying serial killer’s shoes: First with the chilling slogan, “You’ll never tell, they’ll never be able to,” and then with the elaborate Cinderella fantasy he spins in which the girl is “wounded prey” who falls for the killer because he’s so handsome, and who “knows she’s not safe but doesn’t care” because “in the end, she wants to be caught.” The client loves the idea, not because he can admit it plays into some male fantasy, but because he thinks Ginsberg’s gotten into a woman’s head and is reflecting how they really feel (Ginsberg at least has the grace to say he really doesn’t understand women). The simultaneously self-deprecating and self-congratulatory “Ginzo” would be as pleased to find out he’s the author of Don’s nightmare as he is about winning over the client, though he narrowly escapes being fired. This doubly lucky guy is labeled a victim, first when Don threatens to “or else” him if he doesn’t stop shooting his mouth off, and later by Stan, who jokes about Don having “scattered his ashes.”

Similarly, Pauline explains Speck’s homicidal acts to a bewildered Sally by saying that the nurses “stirr(ed) his desire” (for rape and murder) with their short skirts, conjuring a scene in which they opened the door to a “handsome man” (in reality, Speck was quite ugly) and were too naive to realize what was happening and save themselves. As in a fairy tale, only one escapes death, because of a secret hiding place, but Pauline imagines that she’ll never be able to speak again, as if rendered mute by a spell. As Ginzo says to Don in the pre-pitch meeting, it’s all about “a woman and her secrets, the things she’ll never tell,” or perhaps the things that no one wants to hear. Pauline similarly tells Sally it’s time for her to start acting like an adult, and recounts a story about Pauline's abusive father striking her “for nothing” and saying this warning was “valuable advice” that made her a better person. Three cheers for Sally for fighting this nightmare grandmother with, “I know you don’t think so, but I’m a good person.” This episode makes clear that the messages that girls and women are getting are still as poisonous as Snow White’s apple.

In a lighter vein, another sleeping beauty, Roger Sterling, finds out that he’s taken a $410 nap. Having snoozed through business as usual, he’s lying down in his dark office when interrupted by that pesky dwarf, Pete, who reminds him of the need for a campaign for Mohawk on Monday. Roger’s nightmare of being proven useless by Pete becomes Peggy’s dream come true when she extracts $10 for the work and $400 for the lie, proving a saying popular in the years ahead: that it’s not the crime but the coverup that costs you. Working late, Peggy finds out that the office is indeed haunted, but only by Dawn who (like so many fabled children) can’t get safely home.

This launches Peggy’s fairy tale, in which she and Dawn have a drunken girlfriend-y sleepover in which she’s the open-minded liberal and liberator who tells Dawn they have to stick together because they’re both the first of their kind in the office. She wants so much to see Dawn as being like her that she’s clearly disappointed when she doesn’t want to be a copywriter. Peggy shows her own fear by asking if she acts too much like a man, and when Dawn allows that she probably has to in order to succeed, she admits that she doesn’t know if she wants to play that role. Before going off to sleep, Peggy eyes the proverbial bag of gold she’s leaving on the coffee table in front of Dawn, clearly having to fight her own racist thinking. She’s rewarded for her trust with a thank-you note from a woman who must rise at the crack of her own name, and doesn't even check that her treasure is intact.

But the real triumph of the episode belongs to Joan, who makes a dream come true for “Mad Men” fans by getting rid of her nightmare of a husband, saying he’s never been a “good man,” even before they were married and that he knows what she means by that. Even if he doesn’t, we do, which makes her mother’s description of Greg’s re-entry as “finding a little hole in his life, and sticking his elbow in until he can walk all the way in” horrifyingly appropriate.

There may be no bologna in Vietnam, but there is in the weasel-y Greg, who lets Joan think the Army has extended his tour and answers her anger about that with, “Nobody lied to anybody – it’s more complicated than that – it’s war.” And indeed, this is a war between the sexes. When the truth comes out, Joan relieves herself of military duty, rejecting Greg’s orders to be an obedient wife, before taking one last shot at his ego by saying she’s happy to surrender the job of stroking it to the Army.

Even before the breakup, Joan is wary, telling Greg she doesn’t want to know if he’s seen or done terrible things in Vietnam, and if he has to tell her about it, he certainly shouldn’t hold her hand while he does it. She rightly suspects the linking of intimacy and violence, especially at this man’s hands. While Greg’s right that she “slept a long time” in their relationship, her response that she “barely slept at all” sums up her changed state this season. The beauty who can’t sleep, Joan’s wakefulness signals a shift to clear-eyed action. When Greg issues his version of the “or else” threat, she responds by jerking her arm out of his grasp for the last time and saying, “That’s it.” At the end of the episode, she’s still wide awake, contemplating her future while her mother and baby slumber.

“I better not see you again,” Don says to the phantom Andrea. But nightmares and dreams aren’t so easily banished, and the hold that people have on us, whether loving or abusive, can never be shaken off entirely. As Don explains to Megan, our past is going to show up now and then. But these encounters are survivable, if we don’t let them get the best of us. The real mystery date is the one we’ll have some day with death, which we fear will arrive like a terrifying stranger, but which, if we're lucky, we will welcome like a friend.