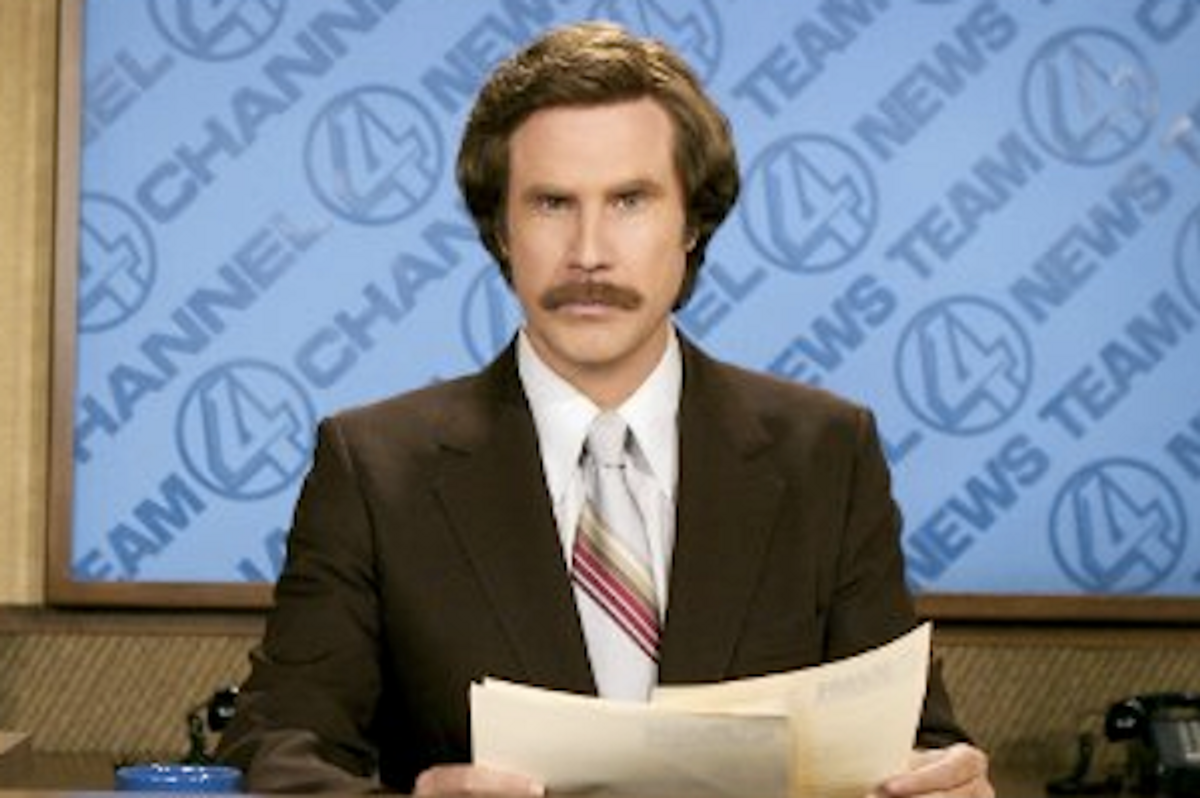 Late last month, Ron Burgundy appeared on the Conan O’Brien show to make a major announcement that the moviegoing audience had been waiting for: In overdramatic Ron Burgundy fashion, he told the world that “Anchorman 2” will finally be made. A few days later, I talked to Ferrell’s writing partner, Adam McKay, who co-wrote and directed "Anchorman" and who will do the same for the sequel.

McKay is one of the kings of the American comedy world, not merely producing blockbuster films, but also helping shape TV franchises like “Eastbound and Down” and creating the website Funny or Die. His career has been defined by his work on projects that weave comedy together with social and political themes.

My interview with McKay will air in full this Tuesday on my weekday AM760 morning radio show. You can click here to stream the full interview live when it airs on Tuesday, or find it archived on the show’s podcast page after it airs. Here is an edited transcript of our discussion, which includes a look at the role of politics in comedy and some specific hints from McKay about what Ron Burgundy may end up doing in the “Anchorman” sequel.

Why has it taken Ron Burgundy nine years to come back to the American stage?

Well, first off, we went and did some other movies; that was the initial delay. By the time we heard from enough fans and heard enough of the demand for a sequel, it had been a few years. We went to the studio and they kind of weren't into it initially. They said the original one made pretty good money, but for what it made we'll give you this and this, and it was a very low budget. We would have all been working for free to do it.

For the next couple of years we'd check in with them every now and then and go, are you sure you don't want to do it? And finally they had said basically no three times and we had given up and thought all right, let's go do another movie. We were playing with the idea of doing "Stepbrothers 2" or another original movie. And just at the last second I said, go check in with them again and see if it's just 100 percent dead. And, crazy luck, a movie had fallen through for them, their view on it had kind of changed and that was it.

Do you think Ron Burgundy has become even more relevant than he was back in 2004?

It's crazy -- "Anchorman" is a movie that certainly fit the time when it came out and every year it gets more and more relevant. Part of what inspired the movie was just how ridiculous the news had become. It was all ratings driven. The people were getting better and better looking. The weather women were getting outrageously beautiful. It was all about the voice and the hair.

Since we made the movie it's gone even more so in that direction. We talk about all these anchormen on the air now and they're all kind of Ron Burgundy-esque guys. So yes, sadly, the character has gotten more and more relevant as the news has gotten to be nothing more than a ratings-driven profit machine that is never going to examine any of the real power in this country. The ridiculousness of “Anchorman” got less and less observed.

Can you give us a hint about what you're thinking of having Ron Burgundy do in “Anchorman 2”?

I don't want to give away too much, but I’ll just give a couple pieces of ideas that we've kicked around. Keep in mind we're still writing the story, but I'll say one phrase for you: custody battle. I'll give you that. I'll give you one other one: bowling for dollars.

At the same time you have been working on an “Anchorman” sequel, you and Will Ferrell have been branching out. For instance, you guys got involved with an idea to do a Spanish-only movie called “Casa de Mi Padre.” How did that happen?

It basically came out of Ferrell was up for doing a low-budget, kind of crazy movie. The original idea was we were just going to do a really bad movie and make it very poorly and have a lot of the joke be how badly the movie was made. At one point Ferrell said, "I want to do an all-Spanish movie." We all kind of laughed and kept kicking around ideas. But Ferrell kept coming back to this idea.

No big studio was interested, because once again it's an all-Spanish movie. So we got this company NALA, who was incredible; they financed it and it's made a nice bundle of money. It's gotten some good reactions. It opens in Mexico in a few weeks and our goal is No. 1 in Mexico. I just think that would be awesome.

There seems to be a trend in Hollywood where the same things are done over and over again. And yet, you and Will Ferrell keep doing different things. How have you resisted the pressure to just do the same stuff?

A lot of it's Will, because he's such a unique star in the sense that a lot of guys who do well in movies, a lot of actors and actresses get successful and they desperately want to stay on top, so they repeat those formulas.

From a distance, if you squint your eyes, I'm sure a lot of listeners are like, what do you mean? It's Will Ferrell, he does Will Ferrell movies. But if you really look at it he tries to do something different with each one, whether it's an action cop movie like "The Other Guys" or doing "Talladega Nights" going into red state America or "Casa de Mi Padre" or "Stranger Than Fiction," which is more of a drama. He's really amazing with that, he's driven by it, and so am I; we want to be challenged and excited. We actually feel like it's harder to do the same formula over and over again, because people pick up on it and you get blasted. Whereas if you're always doing something surprising or interesting or challenging people dig it, audiences want to see it.

As the creator of the website Funny or Die, how do you think the Internet is changing the kind of content we're seeing on movies and television?

It's amazing. I’m 43 and I'll certainly look at a lot of stuff on the computer, having a website, but my daughter doesn't watch TV. All she does is see stuff off of the computer, and all her friends are the same way. They don't watch television; they'll watch TV shows replayed on the computer, so there is a massive shift going on right now.

What that means is more and more movies and TV shows being done for a lower budget. Movies like "Paranormal Activity" that are made for a very low price because the production value and technology has gotten so good; most of the time that's not what leads movies or TV choices. I mean, when you get to giant spectacles like "Avatar" and "The Avengers,"  yes, it's going to be led by special effects. But 80 percent of the content is about the ideas, the actors, the writing and the ideas you're expressing. So, I think there's actually a good thing happening because of that.

You and Will Ferrell may be working on a movie about how difficult it is to get into college. You're also a producer on an upcoming movie called "The Campaign" where Will Ferrell and Zach Galifianakis play candidates running against each other. Is this a deliberate effort to work on more politically themed films?

Here's the thing: I don't view politics as politics. I view them as choices that we're making as a group, and when those choices get crazy you gotta comment on them and make fun. I have no political ax to grind, I just find it absurd that huge billion-dollar corporations can take over elections. I just find it insane that, for instance, we give tax breaks to people like myself making millions of dollars, while there're no tax breaks for working people. That, to me, is not a political issue, that's a life issue. And Will and I just don't discern between the two.

If something's crazy we want to comment on it. We know it's funny, we know it can be tragic. But most of all we know it's interesting and relevant. First and foremost when you're doing comedy, you gotta be relevant and applicable to the times that you're living in. When you try and just do comedy about who is dating who and lifestyle jokes, it gets tiring after a while. It's hard to be funny in that realm.

Do you think there's been a shift in the country that has made the sometimes risk-averse entertainment world a little more accepting of controversial political topics as fodder for comedy?

Yeah, I think there's no question about it. Look, we lost our minds in the ‘80s and ‘90s; we really as a society just felt that everyone could only care about themselves. There was no responsibility to discuss what's going on in your town, your state, your nation. And it was a blast, it was really fun, but it doesn't work.

Today’s debates over unionization, community planning, civil rights and all these other successes that made our country great -- these successes gave us the cushion to party and all become selfish morons in the ‘80s and ‘90s. So now we're returning to those debates and we're discussing things that used to be discussed.

In the ‘80s and ‘90s, when you had dinner with your family or people you met, you didn't talk about the factory closing down the street or the pollution. But now, we are talking about these really important issues and I think it's a really good thing. I don't think it's right-wing or left-wing, I think it's just discussing what's going on -- and it’s good that we can now do that.