Drilling has long gone unregulated in this earthquake-prone state. And now Gov. Brown may be trying to hush it up 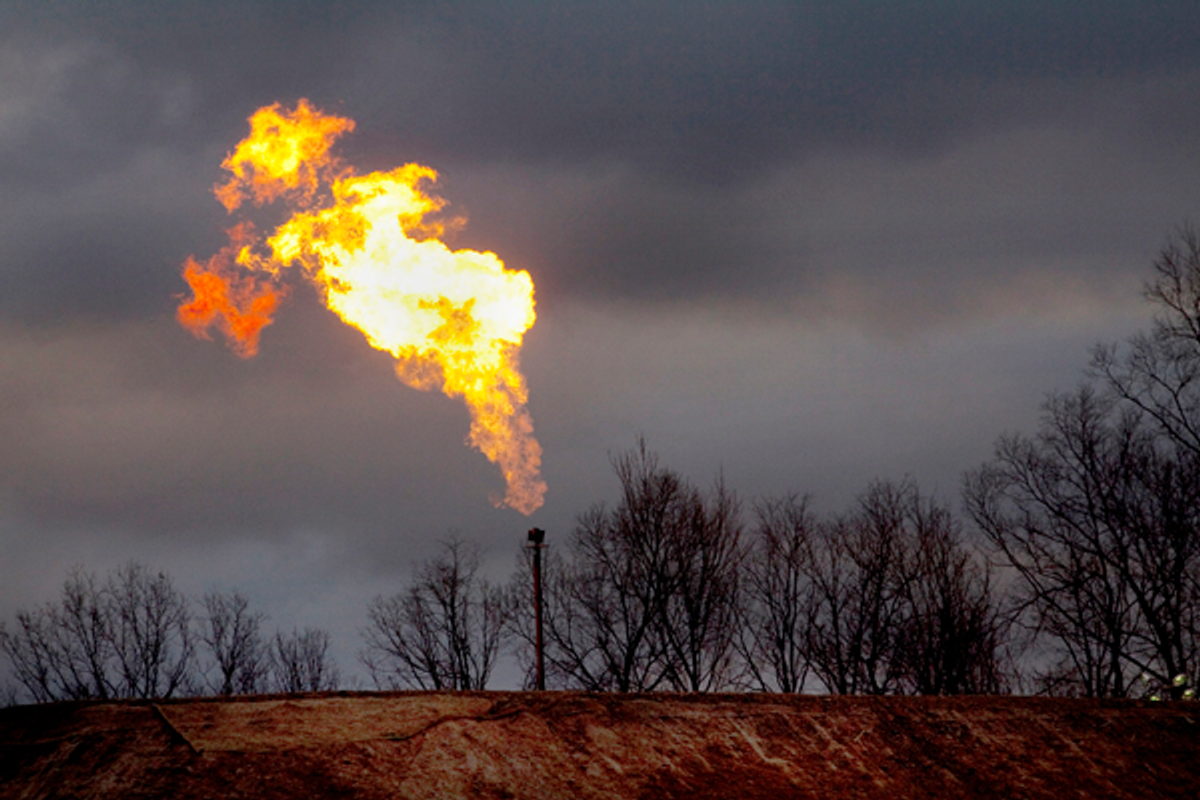 This originally appeared on

Thanks to the smoking gun of Josh Fox's sobering documentary "Gasland," hydraulic fracturing has finally entered our renewable news cycle. Yet despite poisoning groundwater, freeing methane and literally creating earthquakes back east, fracking has a visibility problem in California.

The situation became less clear after a recent investigative report from D.C.-based nonprofit Environmental Working Group explained that California has experienced 60 unregulated years of widespread fracking, whose technical methods and geographical locations in the seismically active state exist outside of the public purview. It got darker after Gov. Jerry Brown's administration wiped the state government's Division of Oil, Gas and Geothermal Resources (DOGGR) website of fracking fact-sheets and documents. Good luck finding anything about fracking on the governor's official site either.

"Since our report came out, the Brown administration hasn't been happy with it," Bill Allayaud, EWG's California director of government affairs, told AlterNet by phone. "They said we quoted their meetings but left out important quotes. But I don't know what we left out, or how we could shine a better light on the situation. We've been trying to work with them now for over a year."

There has also been a great disappearing act. According to Allayaud, gone is the issue's main page, an account of fracking in other states, as well as what he calls an "inaccurate and misleading factsheet about fracking in California." Gone also is a copy of a letter sent by the state in response to questions from Senator Fran Pavley (D-Santa Monica), chair of the Senate Committee on Natural Resources and Water, whose rebuffed inquiries about the extent of California fracking inspired assembly bill 591 (AB 591), currently at the center of a tug-of-war between the interested citizenry and an industry that seems desperate to avoid transparency.

Punch the term "fracking" into DOGGR's search today and you'll receive a white screen with the perhaps accidentally ironic query "Did you mean: cracking" in response. That's probably funny to even most Californians, whose fault-laced state is due for its next catastrophic earthquake, but it doesn't inspire confidence that DOGGR is taking fracking seriously.

"No word on that, sorry," DOGGR spokesman Don Drysdale told AlterNet via email when asked for clarification on the division's online document scrub, or whether they will be replaced or upgraded. Drysdale also explained that DOGGR doesn't have regulations requiring that operators report when, where and how they use hydraulic fracturing to stimulate production. He also said that information from DOGGR regarding fracked wells in the San Joaquin-Sacramento River delta gas fields near shallow groundwater is "not available, and that "we do not have records" of offshore fracking operations in the Long Beach-Santa Barbara drilling area.

"However, the City of Long Beach has its own oil and gas department and may have some information," he added. "We recently began to request that operators voluntarily report their hydraulic fracturing operations (PDF) to FracFocus, a public Web site run by the Groundwater Protection Council and Interstate Oil & Gas Compact Commission."

This Kafkaesque labyrinth doesn't exactly inspire confidence that DOGGR "has regulations designed to ensure well integrity and to protect underground resources," as Drysdale claimed to AlterNet. If it did, there's a good chance that AB 591 wouldn't exist in the first place. That law proposes to legislatively define the fracking technique and disclose its "chemical constituents," recognize its "long history of its application within the state," evaluate its impact on California's natural resources and "geologic and seismic complexity," disclose its sources and amounts of water used and relay any data on "recovery and disposal of any radiological components." That a bottomless well's worth of disclosure demands for a regulatory regime professing to do its job just fine, thanks.

It is also why "DOGGR was raked over the coals" in a March 28 budget hearing "that was more about fracking than anything else," according to Allayaud, who attended. At that meeting, California Department of Conservation (DOC) director Mark Nechodom was rebuffed in his efforts to procure more funding and positions for DOGGR. That fact that he repeatedly assured Assembly members that DOGGR was regulating fracking but was unable or unwilling to disclose the location of any fracked wells or well-casing failures to those members might have had something to do with it. By meeting's end, Nechodom promised to prepare fracking regulations, undertake a scientific inquiry into its practice, and conduct a series of listening sessions in the state.

Better late than never, but DOC and DOGGR still need to speed the plow. According to a report from the Center for Investigative Reporting's Tia Ghose, both the Center for Biological Diversity and Sierra Club are suing the Bureau of Land Management to prevent fracking on federal lands (PDF) -- 2,500 "environmentally sensitive" acres in Monterey and Fresno counties have already been leased. The BLM has suggested that it's mostly grazing land that has been leased before but still remains undeveloped, and consoled worriers by explaining that the agency executes environmental reviews in the drilling permit process.

"Our case is proceeding in the district court on a normal schedule, but there hasn't been any merits briefing or rulings yet," Sierra Club attorney Nathan Matthews told AlterNet. "Nobody from the state has contacted us about this suit. The BLM Web site lists who purchased the leases, but presumably the land could be developed by someone else. Our claim demands that BLM assess these types of risks before proceeding to allow development."

Like DOGGR before them, the BLM's distaste for transparency on an issue as controversial as fracking is counterproductive, and could prove costly in the final analysis if the problems that continue to plague the practice back east migrate westward. But their profit-oriented perspective nevertheless comfortably aligns with the industry itself, which seems all too content to rely on hindsight rather than foresight when it comes to tragedies large and small.

"An original version of AB 591 we had last year asked the industry to map where it was fracking in California, and indicate any active seismic fault within five miles," said Allayaud. The industry's non-profit trade group Western States Petroleum Association "said it wanted thatout. When I asked why, the answer I got was, 'Look, if we were causing earthquakes through drilling, injection wells or fracked wells, you would know it. Look how many geophysicists are running around the state looking at earthquakes.'"

That flippant industry response, taken together with those of the California agencies overseeing that very industry, has only galvanized regional opposition. Many more will inevitably follow AB 591 and the joint complaint against BLM if industry and government alike condescendingly assert that everything is under control to a citizenry told too many times to keep its nose out of its own affairs. The fight over AB 591 exists precisely because the industry won't release its fracking data, from the location of its wells to the chemical makeup of its bedrock-fracturing injection cocktails, without rigorous enforcement.

To play fair, the EWG stripped the mapping requirements near active seismic faults. "We agreed to take it out because the industry is trying to be cooperative," Allayaud told AlterNet. "They're not opposing the bill."

For his part, Allayaud isn't too concerned about California's fault-riddled seismology or inevitable earthquake catastrophes. So far, neither is the United States Geological Service, whose Web site search results on fracking are more extensive than Governor Brown and DOGGR's blank pages. The USGS explains that California's faults are better studied and understood than anywhere else in the nation, and that its populaces are also better prepared for earthquakes large and small. "Hydraulic fracturing has been taking place for many decades in California," the USGS Earthquake Science Center's Art McGarr told AlterNet, "mostly to stimulate oil and gas production in old fields."

"In any event, there is little likelihood that any fracking operation could perturb a nearby active fault so as to trigger a major earthquake," he added. "The stress changes associated with fracking are much too small and localized to interact with a fault capable of producing a significant earthquake. In other parts of the country where fracking has enabled gas production from tight shales, the fracking has not caused earthquakes of any consequence."

To McGarr's knowledge, there are no high-volume waste-water injection wells in California located within areas of high population density, and he guesses that will continue to be the case. But we'll never know until the federal and state government is compelled by a plugged-in citizenry to force the industry's hand, and disclosure. Until that happens, they will side with controversial corporations like Halliburton, which is leading the opposition against AB 591 by arguing that disclosing the chemical cocktails it uses to fracture wells would be a violation of trade secrets. And the last-gasp natural gas bubble that fracking enables will continue to create flammable groundwater and destabilized grounds. Once it becomes apparent that the green defense of fracking is negated by more methane, which is 25 times more powerful a greenhouse gas than CO2, then hydraulic fracturing's disclosure game will be up.

In hindsight, it will look like a bunch of junkies who just didn't know when to stop tapping fossil fuel's disappearing veins.

"We need strong disclosure rules with narrow trade secret protections," Matthews explained to AlterNet. "BLM will be announcing a proposed disclosure rule in the coming weeks, and the public will be able to submit comments on that."

"The Brown administration still says there is no urgency to create regulations to deal with fracking," said Allayaud. "Their focus is on getting permits for regular oil drilling out the door faster. We think they have the capability to do both, and I think AB 591 will push them in that direction, because they need to be pushed. I've never seen a state agency behave this way, and I've been working around them for 36 years."