A scientist uses aquatic automatons to plumb the mysteries of evolution, intelligence and the future 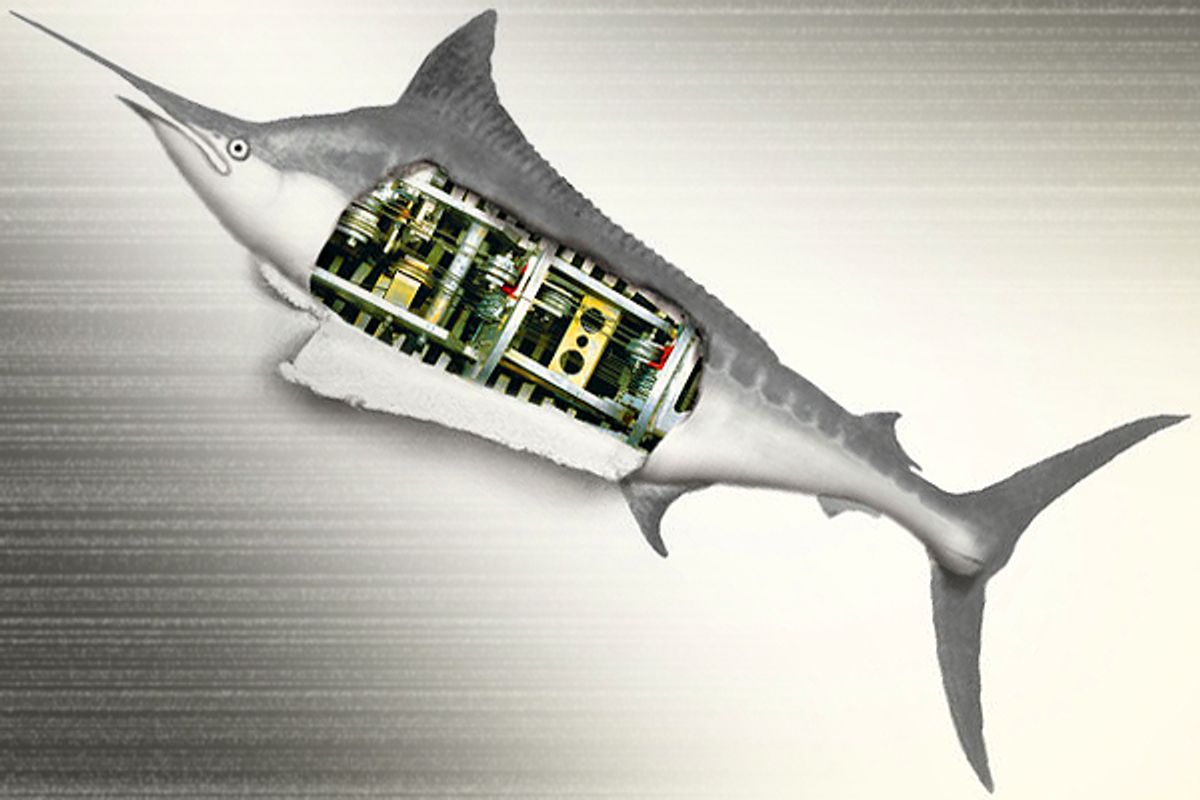 A detail from the cover of "Darwin's Devices"
--

Fish, without a doubt, gotta swim, but how do they do it? And how, over millenniums of evolution, did they get to be so good at it? These two questions have driven the career of John Long, a professor of biology and cognitive science at Vassar College. Long is so into fish that his primal scene of intellectual seduction involved a Ph.D. trying to get him to join her team by taking him out for coffee and asking, "Have you seen the vertebral column of a marlin?" Thus was Long launched into a course of study that would ultimately lead him to the improbable task of making robot fish.

As geeky as this may sound, it turns out that the problems inherent in making robot fish yield some of humanity's deepest questions: How did we get here? What (and where) is thought? How much can we trust the symbols (words, images, digital signals) that dominate our lives? Long's new book, "Darwin's Devices: What Evolving Robots Can Teach Us About the History of Life and the Future of Technology," is part Descartes, part MacGyver and part Douglas Adams, turning from rumination on the possibility of intelligence residing in a brainless body to tips on making artificial fish vertebrae out of coffee stirrers to the dopey yet endearing jokes that seem to flourish in laboratories all over the world.

Long works in a field called biorobotics, which builds physical devices to test hypotheses about animal behavior, rather than studying either the animal itself or digital models. Sometimes an animal can't be studied for logistical reasons: marlins, for example, die in captivity and plesiosaurs are extinct. Computer models allow scientists to simulate complex, unreproducible conditions -- say, the modeling of 10,000 generations of a particular organism -- but as abstractions, they are prone to certain errors.

Robots, as Long explains, have their peculiar virtues. Long himself once created an impressive computer model illustrating how the marlin's backbone helped the fish achieve its awe-inspiring swimming and leaping speeds, only to have a revered elder scientist note, "it appears to me that you've created a perpetual motion machine." Robots, as Long points out, can't violate the laws of physics. Instead of operating in a simulation of a physics-compliant environment, robots simply exist in the real universe, and must therefore play by the rules as a matter of course. At the same time, robots can be simplified to the degree that certain characteristics can be observed in isolation.

The main thing Long uses his robots to study is evolution. His first robot-fish experiment involved creating a bunch of large, tadpole-like "Evolvabots" designed to do one thing: swim toward a light source. With his team of students and fellow scientists -- Long makes a point of mentioning the names of everyone who made significant contributions to his projects, a big departure from spotlight-hogging senior-scientist tradition -- he rated their success at this imitation of "food-seeking" behavior. The robots (called Tadros) were given tails of varying degrees of stiffness and length and were then "mated" (algorithmically) over several generations to see if this would lead to selection for certain kinds of tails. The hypothesis Long and his colleagues wanted to test was that primeval invertebrates evolved backbones because it improved their ability to feed.

The experiment didn't work out as they'd hoped, mostly because, in designing the experiment, the scientists had failed to fully appreciate a factor called wobble. One of the most intriguing and important aspects of "Darwin's Devices" is the way it places the reader in the lab, at the shoulder of people doing hands-on science, sharing in their frustrations (over disappointing data, recalcitrant grant committees and astutely critical colleagues), their successes and their failures. And Long does this so lucidly that you find yourself caught up in the process, grasping the basics and eager to learn the results. It's the best depiction of how science really works that I've ever read.

"Darwin's Devices" could also administer a chastening rebuke to the many laypeople who talk and think sloppily about evolution. Determining exactly how growing a backbone helped ancient invertebrates thrive might seem superfluous to the quick-and-dirty school of cocktail-party Darwinism. Obviously, backbones helped because otherwise vertebrate animals would never have evolved. But as "Darwin's Devices" illustrates, we can easily mistake the reasons for the evolution of certain traits by jumping to what seem like "logical" conclusions, and natural selection is not the only evolutionary pressure applied to a species. There are times when you just have to build something to understand how it works.

For example, the next type of robot Long and his colleagues developed they named Madeleine (because it is shaped, roughly, like the little French cakes). Madeleine had four paddles at each corner of its body, much like the extinct plesiosaur, a marine reptile. This creature was a tetrapod: a sea-dwelling animal descended from land-dwelling ancestors. Living aquatic tetrapods include whales, dolphins and sea otters, but "none of the living aquatic tetrapods ever use all four appendages to swim underwater -- they only use two." With Madeleine, the researchers hoped to figure out why this is so, since "it sure seemed like using four flippers for propulsion should be better in almost any way imaginable."

It isn't, actually, and that launched yet another branch of inquiry about why the plesiosaur used four flippers at all. If it's that easy for legitimate scientists to be mistaken about something as seemingly simple as four-flippered locomotion, you can see why so many of them regard popular but highly speculative pastimes like evolutionary psychology as pseudoscience.

One party who has found the activities of Long and his robotics lab keenly interesting is the U.S. government. It's not a big leap from "robot fish" to the notion of defense applications, and Long, despite a youthful infatuation with all things military, finds this troubling. But not that troubling! After a bit of hemming and hawing about it -- noting that, if over 50 nations are pursuing military robot research, then American scientists can't afford to opt out -- he plunges into rampant (and, I must say, fascinating) theorizing about what sorts of robots would work best in battle. They need to be complex enough to cope with contingencies, but simple (i.e., cheap) enough that commanders aren't afraid to burn through them.

Long ends with these cautionary words: "The reality is that evolving robots are and will be created for academic, industrial and military purposes. This means that we should all become students of robots of any kind, whether they be evolving robots, nonevolving autonomous robots, or semiautonomous and remotely controlled military robots. We need to understand robots so we can proceed with due caution and deliberation." Yikes! And probably true. "Darwin's Devices" will get some of us, at least, a little closer.