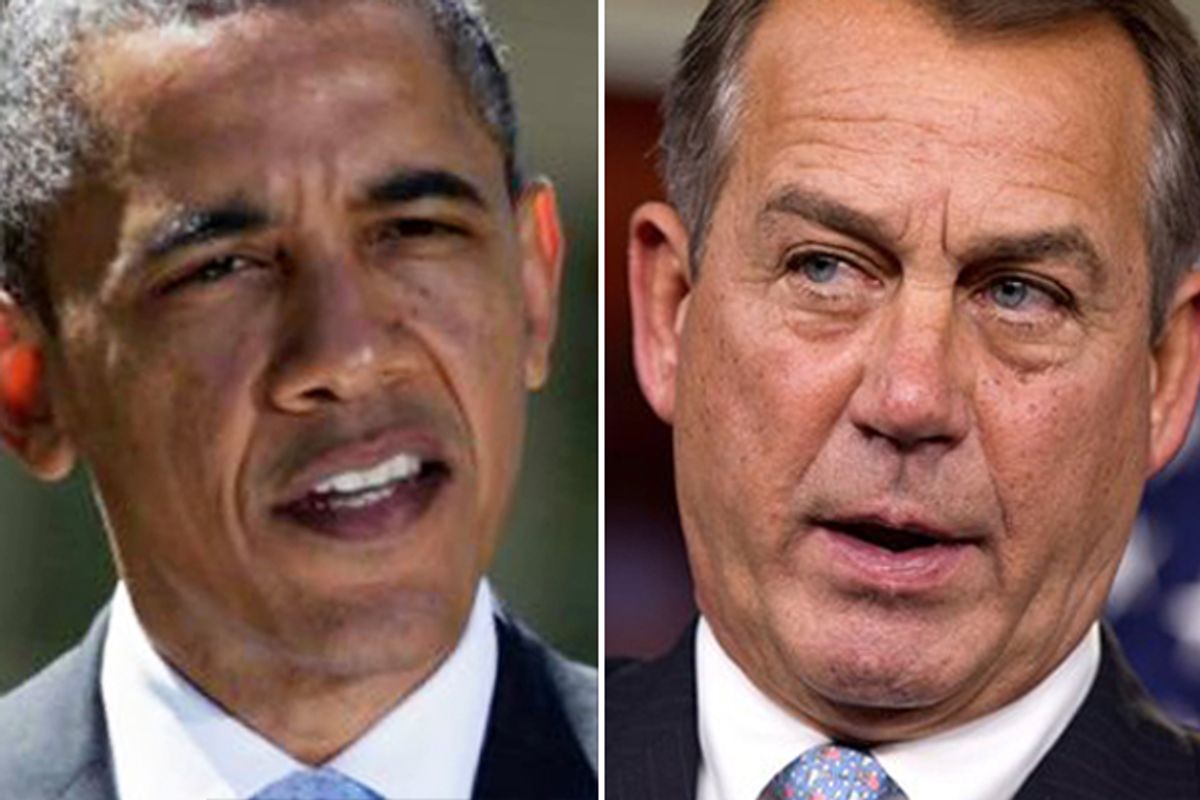 Goldman Sachs says if you want fiscal conservatism, vote to keep things exactly the way they are. The (presumably very well compensated) analysts at Goldman's Global Economics, Commodities and Strategy Research team have released a note (summarized by Suzy Khimm) arguing that a divided Congress plus a Democrat in the White House equals "fiscal restraint." This may shock people who vote Republican under the impression that the party's primary goal is the reduction of the federal deficit as opposed to the elimination of the welfare state and the liberation of rich people from the shackles of redistributive taxation. But it's pretty obvious.

If Democrats control the White House and both houses of Congress, they would likely extend the payroll tax cut and attempt more stimulative spending, because millions of people are still out of work. (They would also likely not allow defense spending to be significantly cut, because they don't want people to accuse them of hating the troops.) If the GOP controls government, they will "fix the deficit" by passing huge tax cuts. Just massive tax cuts, on top of the permanent extension of the Bush tax cuts. (Which Democrats would probably only mostly extend.)

But with divided government, the status quo wins out, and right now the status quo involves horrific insurmountable gridlock coupled with the threat of billions of dollars in scheduled automatic (perhaps devastating) spending cuts and the expiration of various tax cuts. Goldman says that would mean that "a compromise on the expiring tax cuts will be necessary" (which would probably just mean a government shutdown followed once again by the "temporary" extension of the Bush tax cuts), but divided government is the only scenario in which the automatic cuts actually have any chance of taking effect.

This note is of interest only if you are one of those people with an obsessive interest in the size of the federal deficit as opposed to, like, "how many Americans have jobs and can afford to go to the dentist," but give the money-grubbing world economy-destroying plundering high-finance pirates of Goldman credit for plainly stating that the deficit won't go away without revenue, and "cut all taxes" is not a realistic means of generating revenue.

Smart "fiscal conservatives" have long understood that divided government is best for dragging all government business to a halt, which is generally the unspoken (or occasionally spoken) goal of professional "deficit hawks." Goldman gets that you want Democrats in charge of most of the government if you want a balanced budget, because Democrats crave compromise and balanced budgets and fiscal responsibility, on account of modern Democrats being for the most part Rockefeller Republicans. (But if you let the Dems be in charge of all of it, they might try to "give everyone healthcare" again, or something equally awful.)

My question: How much do people pay for these GS research notes, exactly? Because the analysis seems "right" but it is also something you could read on a blog, for free. Like, a Slate intern could have also written this, and it would've been shorter, probably. Stop paying Goldman Sachs, and put some boring econ "wonk bloggers" on your Google Reader instead. Fiscal restraint begins at home!