Guest Post: His administration's war on whistleblowers is also an assault on reporters 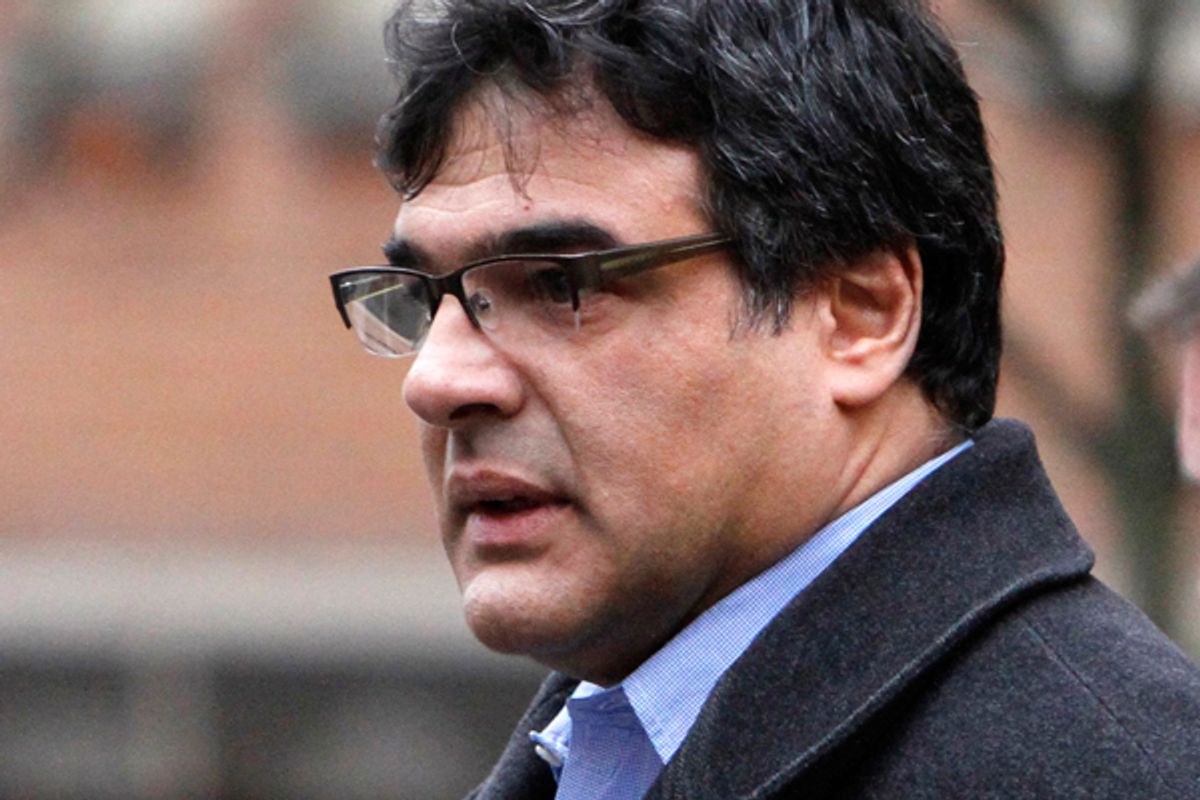 For two years I have been writing about the criminalization of whistleblowing, or as Glenn Greenwald has put it more aptly, the “war on whistleblowers.”  I’m an attorney with the Government Accountability Project, the nation’s leading whistleblower organization.

How did I get into this line of work?  Because I myself was a whistleblower when I worked as a Legal Advisor at the Justice Department and blew the whistle when my advice not to interrogate “American Taliban” John Walker Lindh without an attorney (and, parenthetically, not to torture him) was ignored and then “disappeared” from the file in contravention of a federal court discovery order. After I blew the whistle, the Justice Department retaliated against me by, among other things, placing me under criminal investigation, referring me to the state bars in which I’m licensed as a lawyer based on a secret report to which I did not have access, and putting me on the “No-Fly” List. (The D.C. Bar charges are still pending 8½ years later.) I write about the experience in my new book TRAITOR: The Whistleblower and the American Taliban. Glenn Greenwald, for whom I am substituting here, wrote an eloquent foreword for the book.

While the Bush administration treated whistleblowers unmercifully, the Obama administration has been far worse. It is actually prosecuting them, and doing so under the Espionage Act — one of the most serious charges that can be leveled against an American. The Espionage Act is an archaic World War I-era law meant to go after spies, not whistleblowers. Strangely, using it to target the media and sources is the brainchild of neo-conservative Gabriel Schoenfeld, who would have sources who disclose information to reporters, journalists who then write about it for newspapers, the newspapers that publish the information and the publisher itself all be held criminally liable.

Everyone wants to know why Obama, with his pledge to “protect whistleblowers," would do this.  After all, Obama’s transition agenda recognized that “[o]ften the best source of information about waste, fraud, and abuse in government is an existing government employee committed to public integrity and willing to speak out. Such acts of courage and patriotism, which can sometimes save lives and often save taxpayer dollars, should be encouraged rather than stifled.”  That’s not just a broken promise, it’s a complete reversal.

At first I thought Obama’s war on whistleblowers was meant to appease the intelligence establishment, which saw him as weak. I soon recognized this assault as a devious way to create bad precedent for going after journalists. All the Espionage Act cases involve allegations that the government employee “leaked” information (or retained information for the purpose of leaking it) to journalists.

The government’s spectacularly failed case against NSA whistleblower Tom Drake claimed that he allegedly retained allegedly classified information for the purpose of leaking it to Siobhan Gorman, then with the Baltimore Sun. It turned out that he disclosed unclassified information about a failed and wasteful (multi-billion dollar) NSA spy program that compromised Americans' privacy. FBI translator Shamai Liebowitz pleaded guilty to leaking information to a blogger. Leibowitz made his disclosure because of an all-too-real fear that Israel might strike nuclear facilities in Iran, a move he saw as potentially disastrous. State Department arms expert Steven Kim is accused of leaking to Fox News that North Korea was planning to respond to a U.N. Security Council resolution by setting off another nuclear test — surely of public interest to China and South Korea. And, of course, Army Private Bradley Manning is accused of leaking to WikiLeaks.

In the most extreme proof yet that the war on whistleblowers is also a war on journalists, Glenn Greenwald’s explosive piece last night detailed Department of Homeland Security (DHS) repeatedly detaining and interrogating Oscar- and Emmy-nominated documentarian Laura Poitras, who has filmed three of my NSA clients for the third installment of her War on Terror trilogy. Not surprisingly, her latest film will be about the government’s ever-expanding secret domestic surveillance, NSA treating our nation like a foreign country for spying purposes, and the war on whistleblowers.

In yet other examples, for the Espionage Act prosecution of former CIA officer Jeffrey Sterling, the government has subpoenaed New York Times journalist James Risen three times to testify about whether Sterling was his source. The issue is on appeal in the 4th Circuit from a lower court ruling that Risen had a “qualified reporter’s privilege” not to do so. Going after the media is also evidenced by last week’s Indictment of CIA officer John Kiriakou, which is laced with thinly-veiled references to “Journalist A” (Matthew Cole of ABC News) and “Journalist B” (Scott Shane of the New York Times). “Journalist C” (Richard Esposito of ABC News), mentioned in the charges, mysteriously disappeared from the indictment.

Kiriakou is charged with identifying a covert agent, three Espionage Act counts, and making a false statement, for which he faces 50 years in prison. In the government's own words: “The charges result from an investigation that was triggered by a classified defense filing [by attorneys representing Guantánamo detainees], which contained classified information the defense had not been given through official government channels, and in part, by the discovery . . . of photographs of certain government employees and contractors in the materials of high-value detainees.” In other words, instead of investigating the government's withholding of exculpatory information from Gitmo detainees' lawyers, the government investigated how the lawyers obtained the information. And instead of investigating the approximately 70 names and 25 photos of the detainees’ alleged torturers, the government investigated how the prisoners found them out.

Count I accuses Kiriakou of allegedly confirming the name of an allegedly covert agent — even though the covert agent’s name has never been made public. Count II alleges that Kiriakou violated the Espionage Act by affirming the allegedly covert agent’s (the same one whose name has never been made public) involvement with the “Rendition, Detention and Interrogation Program.” Counts III and IV stem from Kiriakou's alleged communications with New York Times reporter Scott Shane, for a story he wrote in 2008 and for which Shane had some 23 other sources.  Count V alleges that Kiriakou tried to trick the CIA, but failed, during the pre-publication review process for his book, "The Reluctant Spy: My Secret Life in the CIA’s War on Terror." The Indictment leaves out that Kiriakou took the “trick” information out of his book, and that the CIA cleared Kiriakou’s book in its entirety. More likely, the government is actually upset that Kiriakou's book sharply criticizes the CIA’s torture program and reveals embarrassing information about the FBI - namely that the FBI shelved potentially-actionable intelligence in the aftermath of 9/11.

The indictment of John Kiriakou, like that of Tom Drake, is meant to chill whistleblowers and the journalists who report their stories.  After the Justice Department’s case collapsed, Drake’s prosecutor requested at sentencing that the judge impose a steep fine of $50,000 “to send a message” to intelligence community employees “who live by these non-disclosure agreements.” (“Non-disclosure agreements” are not to be confused with Omertà-style loyalty oaths. Federal employees do take an oath: to the Constitution, not to the President, an Agency, a boss, or a broken classification system.) The judge gave Drake no fine, but the government’s desired message is especially odious because Drake and Kiriakou are the only people to be prosecuted in relation to two of the Bush administration’s biggest scandals—warrantless surveillance and torture. After being put through what a federal judge called “four years of hell,” Drake is out a career, a federal retirement package, and almost a hundred thousand dollars in attorneys’ fees. Kiriakou himself has also spent tens of thousands in attorneys’ fees and is struggling to raise the million dollars his defense is expected to cost. Intelligence community employees with mortgages and mouths to feed no doubt get the message.

Kiriakou’s Indictment fails to mention that Kiriakou served the CIA and the United States at great personal peril – he survived at least one assassination attempt -- for almost 15 years and was trusted with the country’s most sensitive secrets and counter-terrorism operations. It also fails to mention that he was the first CIA officer to call waterboarding “torture” and that he revealed that the CIA’s torture program was policy rather than aberrant playtime.  The law-breaking telecoms who received retroactive immunity from Congress, the interrogators who tortured prisoners, the officials who gave the orders, the attorneys who authored the torture memos, and the CIA agents who destroyed the interrogation tapes have not been held professionally accountable, much less been charged with crimes. National security and intelligence whistleblowers have become the glaring exception to the Obama administration's mantra of "looking forward, not backward.”  If you committed crimes under the guise of national security and the war on terrorism, you will not be held criminally liable, but if you blow the whistle on crimes, you risk criminal prosecution under the Espionage Act.

As I keep saying, John Kiriakou is the new Tom Drake — an assessment with which Drake himself agrees. And the government’s latest dirty little secret?  For these heavy-handed, oh-so-serious, America-harming, foreign nation-benefitting Espionage Act charges, the government was willing to let Kiriakou plead guilty to a single felony with no jail time.  Desperate.

UPDATE: Journalist Jane Mayer (who won the prestigious George Polk Award for Magazine Reporting for her New Yorker story on NSA whistleblower Tom Drake) just e-mailed me that during the awards ceremony, “I pointed out that when our sources are prosecuted, the news-gathering process is criminalized, so it’s incumbent upon all journalists to speak up.  I thanked the Polk judges especially for picking Tom’s story, for that reason.” She’s paraphrasing, of course, because the transcript of the awards ceremony is not yet available, but her point is clear.

UPDATE II: “Journalist A” in the Kiriakou indictment, Matthew Cole (who allegedly received illegal leaks from Kiriakou), is turning out to be a mercurial character.  As Politico's Josh Gerstein reported, Cole “worked until earlier this year as a producer for ABC News’s investigative unit ... Cole’s alleged role also raises questions about whether Cole, whose website indicates he was working on a book at the time, was straddling the line between traditional journalism and information-gathering for lawyers representing Guantánamo detainees. ... Public court papers don’t offer much in the way of context for Cole’s interaction with the defense investigator.” Nor does Cole’s website, which was taken down after Gerstein’s article on Monday but can be seen here, elucidate the matter.

Cole’s removed website also says that Cole is “currently under contract to write a book for Simon & Schuster,” but as Jason Leopold—lead investigative reporter for Truthout.org – told me, Cole’s Simon & Schuster contract was cancelled.