Racism and the National Review

Derbyshire may be gone, but William F. Buckley's magazine championed divisive racial politics – and still does 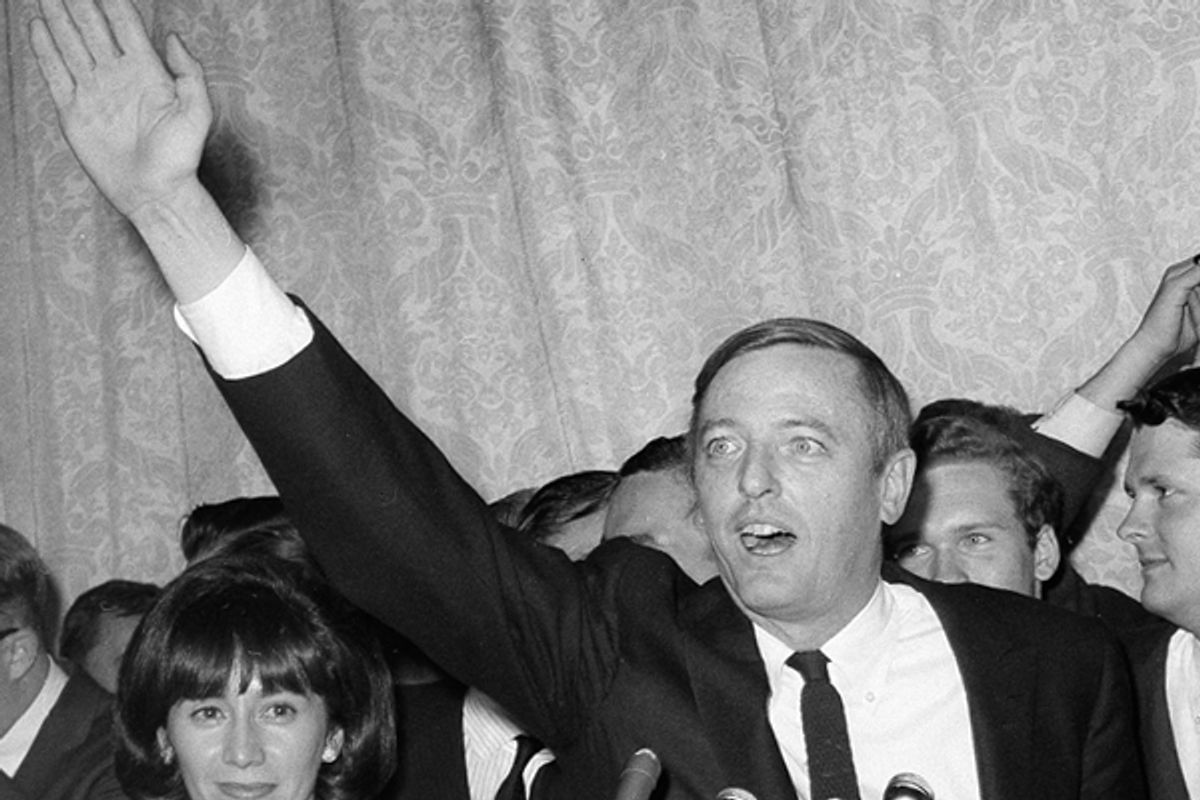 National Review editor Rich Lowry finally did the right thing and fired John Derbyshire for an unbelievably racist and deeply stupid column (printed elsewhere) about the "advice" he gives his son about avoiding black people. Maybe it represents a ratcheting back of right-wing ugliness about the Trayvon Martin case. But if you want to understand how that tragedy went from being an occasion for bipartisan sorrow to another ugly battle in the culture wars, the National Review is a good place to start.

Although founder William F. Buckley is widely credited with driving John Birch Society extremists out of the conservative movement, he made his own contributions to the ugly coarsening of American politics on the issue of race. He and his magazine defended segregation and white supremacy in the South (though he later apologized), while in the North, he played a leading role in making the issue of rising crime both racial and political – with arguments and tactics still being used in the Trayvon Martin case today.

I just finished "The Cause," Eric Alterman and Kevin Mattson's history of modern American liberalism, and I was particularly fascinated by their account of the lasting impact the 1965 New York mayor's race had not only on the city but on liberalism. Buckley ran against liberal Republican John Lindsay and Democrat Abe Beame, and of course lost. But for a while the elite conservative Buckley became a hero to some working-class New York Democrats, for his ability to channel their anger about the city's rising crime rate, often in racial terms. He mocked liberals for pointing to racism and poverty to explain crime, arguing that those social forces didn't "make Negro crime any less criminal." He declared flatly:  "I believe that young thugs are young thugs, irrespective of race, color or creed." Before there were Reagan Democrats, there were Buckley Democrats.

Lindsay won the election, but Buckley won the debate about crime. After the newly elected mayor appointed a civilian complaint review board to examine rising reports of police brutality, New York cops fought back with a ballot measure to repeal it. Buckley and conservatives backed the measure, while the liberal establishment fought it ferociously. The measure passed thanks to a once unthinkable alliance of outer-borough Jews and "white ethnics," mainly Catholics – two pillars of the so-called New Deal coalition that kept Democrats in the White House for 36 years, with a short break for Dwight Eisenhower. National politics has never been the same.

The sense that liberals, black and white, care more about criminals than crime persisted beyond the 1960s. I grew up in New York back then and I remember genuine fear about rising rates of crime and arson in the city. With uncles who were cops and firefighters, I was familiar with the sense of resentment that their jobs were getting more dangerous, but Lindsay was making them out to be the bad guys. Of course it was never true that liberals didn't care about crime. Rev. Martin Luther King Jr. counted crime among the scourges to be fought in the black community, and in our day Jesse Jackson and Barack Obama have done the same. Yet once Republicans made the issue political, you were "soft on crime" if you insisted on acknowledging that poverty and oppression play any role in it at all.

Derbyshire stated crudely what Buckley channeled with more finesse – and it helps explain the right wing's need to demonize Trayvon Martin. In the 1960s, the right fought civil rights liberalism by blaming black people for their own troubles, by defining African-American men in particular as scary and dangerous, and by attacking liberals for refusing to "admit" it.  According to this playbook, Trayvon Martin had to be made into a "young thug," and George Zimmerman had to be rescued from the attacks of liberals and turned into a man who was just using common sense, defending himself and his community from a known danger.

Rich Lowry himself, though he has now distanced himself and his magazine from "Derb's" crude racism, continued Buckley's tradition last week, with a tendentious column accusing black leaders of "politicizing" Martin's death while "ignoring" the problem of black teens murdered by other black teens. (This has become a big fake issue on the right.) Lowry ignores years of hard work to combat "black on black crime" by national and local black leaders. The murders Lowry writes about indeed deserve more attention and more outrage than they inspire, but it's preposterous to claim black leaders haven't demanded society pay attention. They have, and sadly, they will again; it's the larger society that refuses to listen.

And in the end, the fact that some black teens are murdered by black teens has no bearing on the Trayvon Martin case. Black leaders and journalists took up the cause because local authorities were ignoring it; without their "rabble-rousing," we would never have known what really happened. An unarmed black teenager was shot dead and his killer went free.  Local police conducted a subpar investigation that nonetheless convinced the lead investigator that Zimmerman should be charged with manslaughter, but he wasn't.

Meanwhile, the right-wing outrage machine is more concerned that Zimmerman may be being wrongly accused of racism than that a boy died largely because he's black. William F. Buckley's magazine played a key role in building that outrage machine, and it continues to keep it going, whether or not John Derbyshire works there anymore.