Has any GOP candidate ever been as helpful to Democratic ad makers as Newt Gingrich has been? 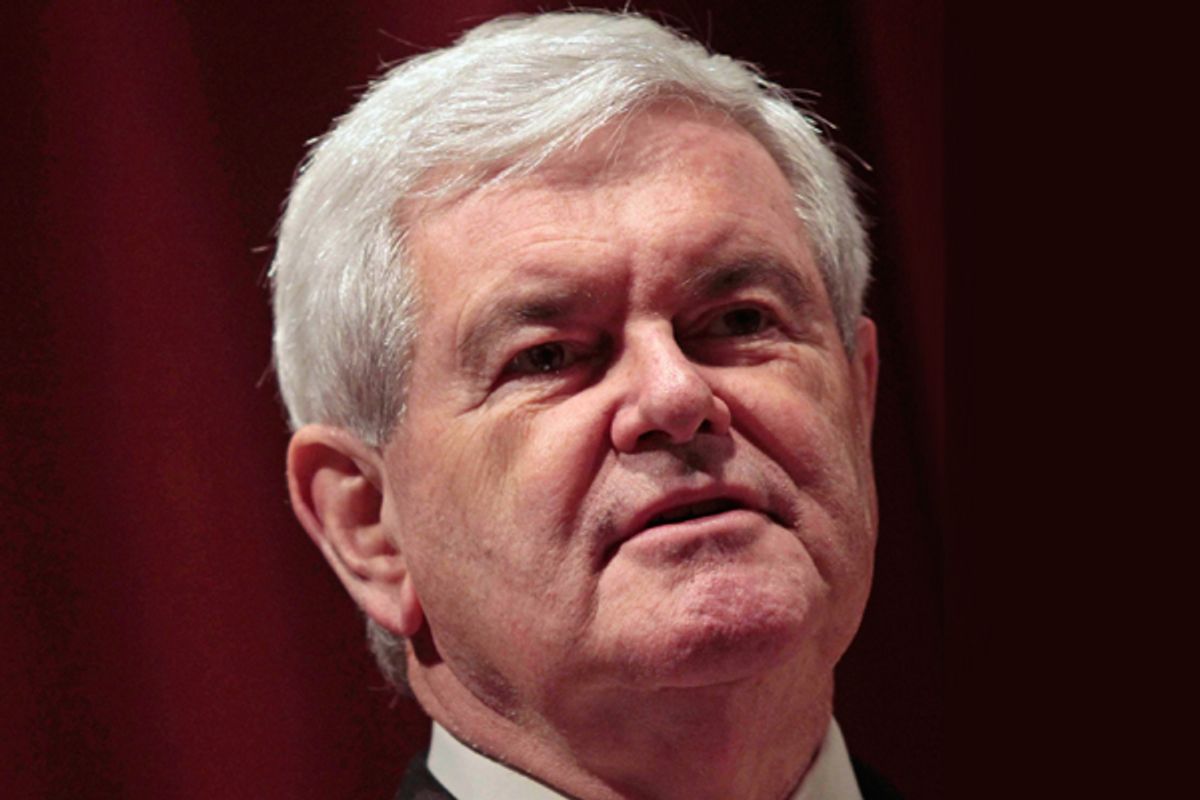 Newt Gingrich knows it’s over. His chances of claiming 1,144 delegates during the primary season evaporated more than two months ago and the possibility of a deadlocked convention that seemed to sustain him more recently is now essentially nonexistent. The former House speaker is still refusing to actually say the words “I quit,” but he’s already begun a ritual familiar to most primary season losers: pretending he didn’t really mean all of the nasty, horrible things he said about the guy who beat him.

On a Fox News Sunday appearance that doubled as campaign postmortem, Gingrich played off the harsh attacks he’s leveled against Mitt Romney as “part of the business” and said the two men were now at peace with each other.

"I hit him as hard as I could, he hit me as hard as he could," Gingrich said. "Turns out he had more things to hit with than I did.”

That last part is certainly true. Perhaps the single most devastating ad of the entire GOP campaign was a Romney spot that simply ran the first 30 seconds of the “NBC Nightly News” from Jan. 21, 1997, when the lead story was the record ethics fine that Gingrich’s House colleagues had levied against him. The ad went up in the days before the Florida primary, when Romney turned a polling deficit into a double-digit landslide that marginalized Gingrich for good.

But until his disappearing act, Gingrich’s public comments about Romney were often scathing. Back in January, for instance, Gingrich said that Romney “will not survive against the Obama machine” and that the president “frankly, will just tear him apart" and warned that “someone who will lie to you to get to be president will lie to you when they are president.”  He also accused Romney of peddling “pious baloney.”

Primary season acrimony is customary, but Gingrich’s attacks on Romney have been notably blunt and personal – as memorable as Bob Dole snapping at George H.W. Bush to “stop lying about my record” in 1988, or Bob Kerrey’s 1992 warning to Democrats that extramarital and Vietnam draft baggage would cause Bill Clinton “to get opened up like a soft peanut” in the fall. Dole’s public display of bitterness, which reflected a decades-long rivalry between the men, probably helped keep him off Bush’s ’88 ticket (the Kansan was the consensus choice of party leaders, but Bush went with Dan Quayle instead), and there were suggestions in the summer of ’92 that Kerrey was nixed as a potential Clinton running mate because of his own primary season conduct.

In a way, it’s easy to imagine both Gingrich and Romney moving past whatever hard feelings exist between them. Gingrich has a knack for making loud and provocative pronouncements, then reversing himself and pretending he never said anything of the sort. It’s part of the reason he’s endured so long on the public stage. And Romney seems to agree with the Gingrich line that it’s all “part of the business.” Remember how quickly he went from shredding John McCain as a conservative sellout to singing his praises in 2008?

The problem for Romney and the GOP is that much of what Gingrich has said during the primaries is excellent raw material for Democratic general election ads. Like when he argued that Romney had not engaged in “traditional capitalism” while at Bain Capital, and alleged that the private equity firm “looted” companies that it took over, callously fired workers, and “walked off with millions of dollars.” As he said in New Hampshire in January:

“Is capitalism really about the ability of a handful of rich people to manipulate the lives of thousands of other people and walk off with the money, or is that somehow a little bit of a flawed system?” Gingrich told reporters after a visit to an electric company here. “I do draw a distinction between looting a company, leaving behind broken families and broken neighborhoods, and leaving behind a factory that should be there,” he said.

Obama’s campaign badly wants swing voters to see Romney as a symbol of a protected, super-affluent class that has grown even richer while working Americans have suffered. Gingrich’s words could be useful in making this case – just as Gingrich’s claims that Romney is a dishonest political chameleon could play into Democratic attacks on Romney’s flip-flopping. Actually, we’ve already seen how this can work: In his speech criticizing the Paul Ryan budget last week, Obama cited Gingrich’s May 2011 claim that Ryan’s Medicare plan amounted to “right-wing social engineering.”

Most primary season losers aren’t as helpful to the other party as Gingrich has been. The best parallel for his conduct might be found in Ted Kennedy’s unsparing assault on Jimmy Carter in the 1980 Democratic primaries, which the Reagan campaign seamlessly rolled into one of the most effective attack ads of the fall campaign. Don’t be surprised if Newt Gingrich makes a similar cameo in a Democratic ad or two this fall.