The coming war on Mormon jokes

As Republicans consolidate behind Mitt Romney, liberals are about to be accused of mass bigotry 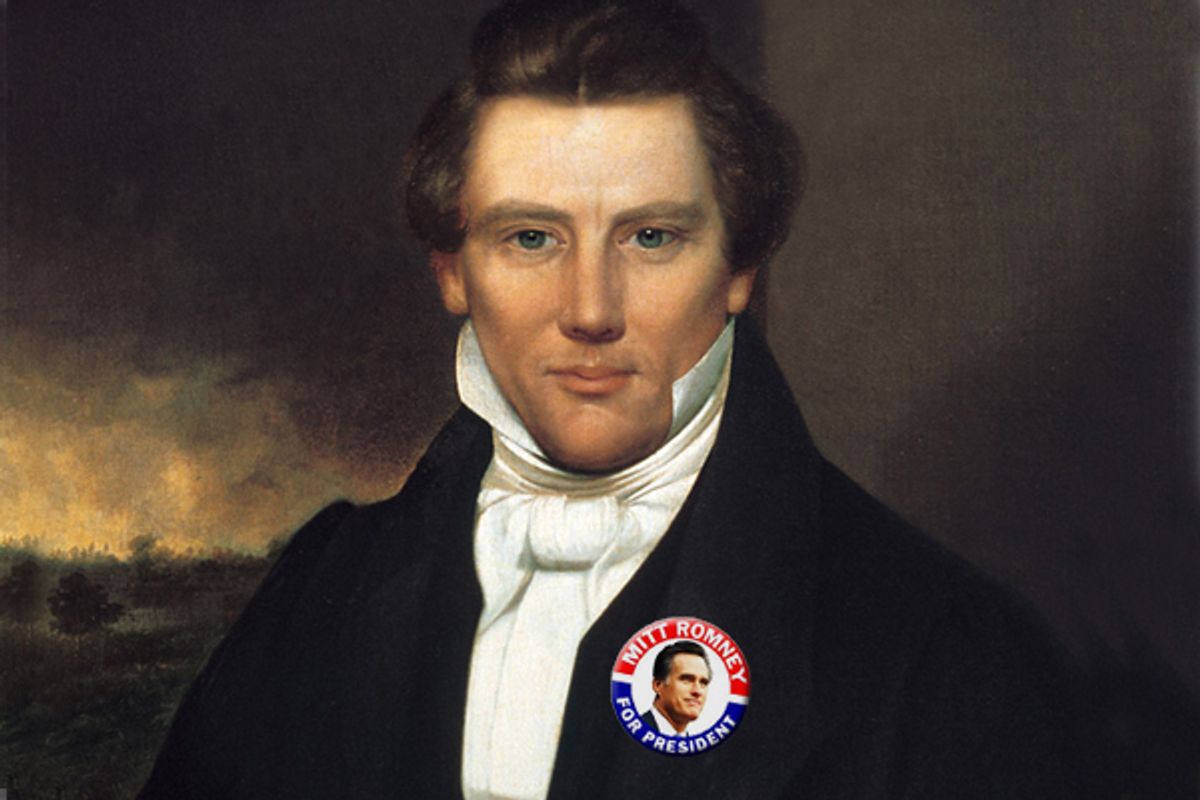 Once Mitt Romney has the the nomination completely sewn up, a conservative movement that has been skeptical of him will quickly close ranks behind him and do their damnedest to get him elected president. Whatever lack of enthusiasm the movement's activists and opinion leaders suffer from will not be at all apparent in their defenses of Romney's record and credentials.

A vital early job for the party is setting the boundaries of what is and isn't "fair game" for political attacks. While most negative rhetoric is sort of cheerfully accepted by the objective press and "Village" elders as part of the wonderful game of politics, some lines of attack -- like stuff involving children and families and oftentimes health -- are considered beyond the pale. The line is informally negotiated early on. In 2008, the right largely failed to make it seem improper to go after John McCain's age. Liberals (though right-wingers will disagree) failed to make Barack Obama's church membership off-limits.

Religion is already a bit of a gray area, because it obviously affects a person's political choices much more fundamentally than, say, being divorced or a cancer survivor or any number of other biographical details that pundits and journalists instinctively dismiss as irrelevant when it comes to picking a president. Rick Santorum's conservative Catholicism practically defines him as a candidate, so it is "appropriate" to note and criticize his religious practices.

Mitt Romney, as you may have heard, is a Mormon. Because Romney will be the first Mormon major presidential nominee in American history, and because Mormonism is still exotic and strange to many Americans, his religion will be an issue. So the people who would like Mitt Romney to be the next president have to work to make certain arguments about Mormonism seem illegitimate. This process has already begun, basically, but by the end of it, everyone who has ever made a "magic underwear" joke will be declared an intolerant liberal bigot.

So, full disclosure, I have at various points made mocking reference to various tenets of the Mormon faith, including temple garments. Charles Blow made a similar joke, and apologized, but it should be quite clear that making a "magic underwear" joke is significantly different from traditional anti-Mormonism, which involved spreading hysterical lies about their beliefs and practices, expelling them from places, and sometimes shooting or hanging them. Once we're at the "lighthearted japery" phase, your religion is actually doing pretty OK, acceptance-wise.

Kevin D. Williamson, a National Review contributor whom I tend to think of as not one of "the crazy ones" (but who engages in dumb culture war crankery with the best of them) has written a National Review cover story on the Mormon church and its detractors, and at the Corner he is busily setting the terms of debate, deciding which liberals have Gone Too Far. I think we'd both agree that ill-informed religion-bashing is in poor taste, and asking Mitt Romney if he is racist is dumb, but I suspect that mission creep will lead Romney's defenders to link all mockery with plain bigotry.

Lawrence O'Donnell, for example, is now officially a bigot for making fun of Joseph Smith, the guy who invented Mormonism. O'Donnell says Smith was a weirdo who had sex with women he wasn't married to and explained that God told him to do so, which is true, but it is also rude to make fun of the founder of a religion. In an effort to find hypocrisy in O'Donnell's mockery, Williamson offers this:

The exact nature of Smith’s polygamy is contested (his only children were from his first wife, leading some to believe that his polygamy was of a non-sexual nature), but, yes, he was a polygamist. So was Solomon. So was Abraham. And, oddly enough, Lawrence O’Donnell plays a polygamist’s attorney on television — there’s nothing quite so satisfying as profiting from the prurient interest in a subject you denounce.

Lawrence O'Donnell says polygamy is bad but on a fictional TV show he pretends to defend it!

Still: To tie the church's polygamist past to Romney is unfair, because the practice was long dead by the time he was born. On the other hand, while Romney isn't responsible for the church's history of racism, it seems appropriate to ask what he thought of a doctrine that existed well into his adulthood. (Though I am largely in favor of every politician getting asked if they literally believe everything their religion teaches, because it would be funny. And revealing!)

The "MSNBC is bigoted against Mormons" meme is spreading far and wide, though the real, full-throated defense of Mormonism on the right (which I am willing to bet money will frequently involve Evangelicals who have a history of Mormon-bashing) won't really get going until the general election campaign begins in earnest. It will involve a lot of manufactured umbrage over nothing, because that is what modern campaigns are largely built on. And it will trivialize actual damaging or hateful anti-Mormon bigotry by making every dumb joke a vicious slur. We did already have a small preview: When the Obama campaign stupidly announced its plan to call Mitt Romney "weird," because he is sort of weird, the outrage machine cranked into gear and asked if "weird" is "code" for "Mormon." (There was also a flare-up when our own Joan Walsh made reference to the practice of posthumous Mormon "baptisms" of deceased non-Mormons -- a practice that offends most other religious groups and, interestingly, something that was actually done to Romney's anti-religion father-in-law.)

There is obviously plenty of actual anti-Mormon prejudice in the nation, from intolerant liberals and conservative Christians (the conservative Christians, in my experience, tend to have much wackier and more bizarre beliefs about what Mormons do and believe). There are things some people feel comfortable saying about Mormons that they would not feel comfortable saying about Jews. But that rule goes the other way, too: If it'd be kosher to say it about Muslims or Hindus or whatever, it's not stepping out of bounds to say it about Mormons.

Williamson's larger point, when he is not hunting down bigots, is that many religions have founders or transformational figures with sketchy biographies, most religions have doctrines that seem absurd when taken out of context or strictly literally, and not all followers of a religion believe in the same way. Which, duh! I agree: Most religions were founded by lunatics, liars, con men and worse, and many of them preached or still preach racism, homophobia and misogyny, and so none of them should be declared off-limits for mockery and criticism. Michele Bachmann's Lutheran church believes insane things.

To a secular liberal, it's funny to watch, say, an Evangelical pastor mock Mormonism, because both churches seem to hold equally silly beliefs. Non-Mormon Christians at least don't have to suffer the indignity of their odd tenets of faith (Abraham lived to be 175?) having been created very recently, but it is certainly relevant to me if a politician believes we're living in the End Times or not. And if they do, I shall feel free to mock, because that is stupid and dangerous.

The Mormon Church, it should be noted, is also a conservative political institution, making it just as much fair game for criticism as a labor union or an interest group. They take stands on political issues, and while I doubt very much that Romney will "take orders from Salt Lake City" should he be elected president (I'm much more terrified of him "taking orders" from the National Review, frankly), if his church has a position on immigration or gay civil rights, then his church is politically relevant.

There are people on the right who see any skepticism as religion-bashing, though they tend to object solely to the bashing of evangelical Christianity or Catholicism while defending the rights of other people to, say, mock the prophet Mohammed. But a conservative movement that is going to celebrate Mohammed cartoons can't also object to the mocking of Joseph Smith.

UPDATE: I should clarify that while  I think O'Donnell's statement was intended to be a joke, his account of the life of Joseph Smith is indeed totally wrong: The religion wasn't founded to justify Smith's indiscretions, because by all accounts his relationships with other women didn't begin until after the establishment of the church. Smith was still probably something of a weirdo, though.