After another disappointing tournament, Woods' career is looking more and more like Mike Tyson's and O.J. Simpson's 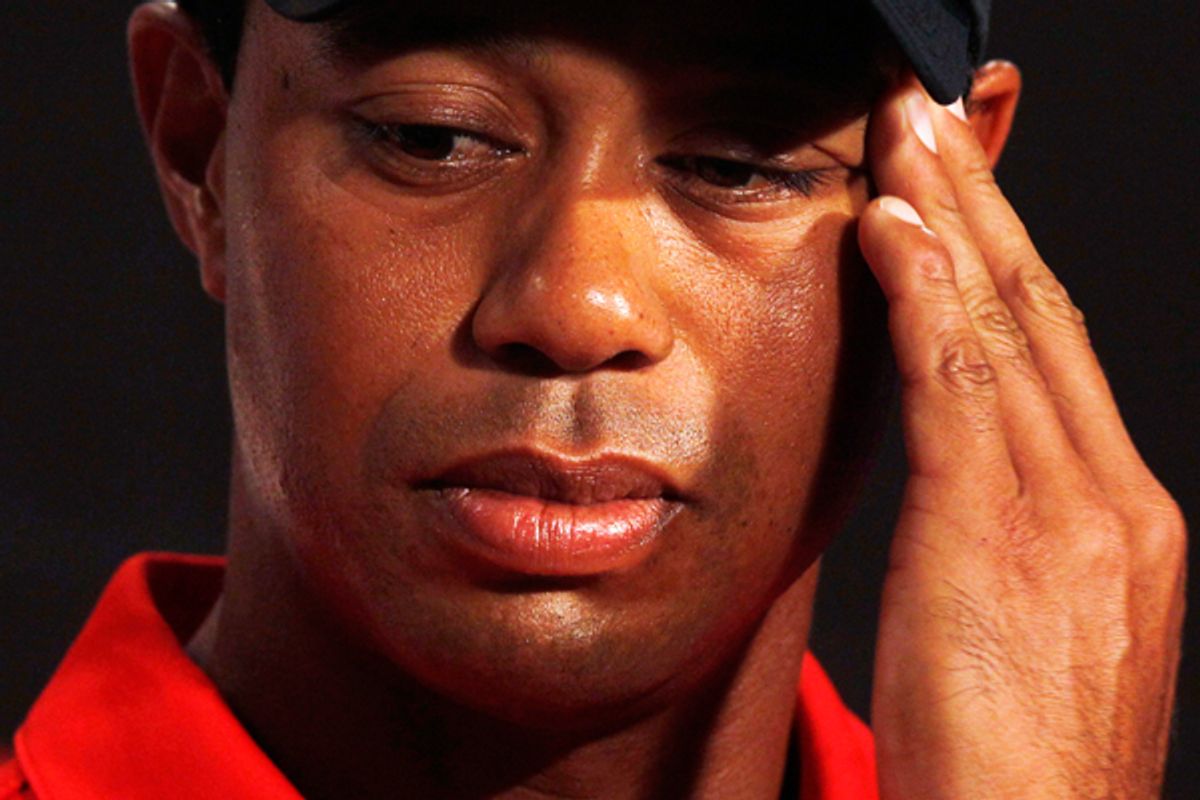 Of the three Lost Boys of SportsWorld – Tiger Woods, O.J. Simpson and Mike Tyson – I’ve always found Tiger the least appealing or interesting, yet the most poignant. He grew up before our eyes. At 2, he swung his cut-down club for Bob Hope on TV as his Zeus-ish Dad, Earl, beamed over him. By 5, Tiger was giving tips in Golf Digest. The real question he needed to answer, I came to think, was whether he truly loved golf or just wanted Earl to love him.

After all, how could you repay a dad who said, “There is no limit because he has the guidance. I don’t know yet exactly what form this will take. But he is the Chosen One.”

The Guiding One died in 2006, three years before the Chosen One cracked up and stopped winning major tournaments, four short of Jack Niklaus’ record of 18. Tiger’s mind was blown. I didn’t much care. This wasn’t Magic Johnson getting sick or Dale Earnhardt hitting the wall. This was a surly, entitled control freak who had intimidated the golfing media and gotten a pass in general because he made the 1-percenters even richer.

But he was a Lost Boy, after all, and that old poignancy must have bubbled up because I found myself rooting for him – as I always have for O.J. and Iron Mike – through the Masters tournament this weekend. And what could better serve the narrative than the Chosen One coming back to us on Easter Sunday? I should have known better. With Jeremy Lin and Tim Tebow, who may possibly be angels, already in play, why would the Great Scorekeeper waste a round on a churl who had blown it. Back in 2002, Tiger could have integrated the Augusta National Golf Course with females and all shades of golfers of color, with nothing more than a raised eyebrow.

But now he just kept slipping deeper in the Masters pack. He sulked and raged, cursed and threw clubs. Maybe he was sensing, as I was, that he was beginning the long slide down into the sports department of Limbo where Mike and O.J. await.

Of the three Lost Boys, I met Mike Tyson first, when he was around 14. He was a retired mugger from Brooklyn remanded to the Tryon School for Boys in upstate New York. He was beating up all the inmates and starting on the guards when a counselor brought him to Cus D’Amato, a once-famous fight manager down on his luck who lived nearby. The aging white man saw the chunky black kid as a, well, Chosen One.

He eventually adopted Mike and added his own rage and paranoia to Mike’s. He taught Mike to use his fears as fuel. Mike was still in his teens when Cus told me, "He may go down as one of the greatest fighters of all time … if there are no distractions."  Cus died in 1985, the year before Mike, at 20, became the youngest heavyweight champion in history. He soon became distracted and began to spin out of control.

I met O.J. for the first time in 1969 at Joe Namath’s bar in Manhattan where he told me a story. At a teammate’s wedding, he said, he was sitting at a table with other black players when a white woman said, “You don’t have to sit with the niggers, you can sit with us.” When I expressed my liberal horror, he grinned at my ignorance. She was telling him, he insisted, that she didn’t see him as black or white, just as O.J. Lost Boy, indeed.

I came to Tiger, indirectly, when he was about 15 – and missed the story. An old black man came up to me on a public golf course in L.A., tapped my notebook and told me he had a better story than whatever I was covering. There was a kid, he said, who would soon own golf because of his father, a former Green Beret lieutenant colonel. Dad had taken Tiger to a military course where an admiral spotted him and said, “You’ve got some golfer there, Sergeant.” Earl would have Tiger make the payback for that racial and class slur.

When Tiger crashed his car in 2009 and the turgid details of his psycho sex life emerged,  I had the same thought I had in 1997 when Mike, after three years in jail for rape, bit off part of Evander Holyfield’s ear while losing a title fight: This is how you declare emotional bankruptcy when you’ve been conditioned to never quit, when blowing up your world is the only way out.

Maybe O.J.’s blundering  kidnapping and armed robbery caper in 2007 was also a psychic suicide. It seemed too silly to be judged seriously, so I figured he was sentenced for being acquitted of murdering his ex-wife and her friend in 1995. I had been ridiculed for my theory then that O.J. was protecting the real killer, his son, knowing he could beat the rap while the kid couldn’t. I’m delighted that the theory has reappeared in a new book. O.J. is 64 and in prison until at least 2017.

Iron Mike, 45, seemingly smiley on meds, can be seen in such odd fare as the "Hangover" movies, a cable reality show in which he trains racing pigeons, and the Charlie Sheen roast (I do recommend James Toback’s superb documentary “Tyson”).

None of the Lost Boys was able to craft his own character, to be his own man. Cus created his son to whip the world but not to find and hold his place in it. O.J. had too many fathers – coaches, producers, directors – and he spent his life trying to please them. By the closing rounds of the Masters, it began to seem possible that Tiger was ready to hole out and join them.

Robert Lipsyte is a former New York Times sports columnist. He is the author of "SportsWorld: An American Dreamland," among other works.