Do I friend the dad who left?

For nearly three decades I said I didn\'t care that he bolted. Then I discovered how wrong I was 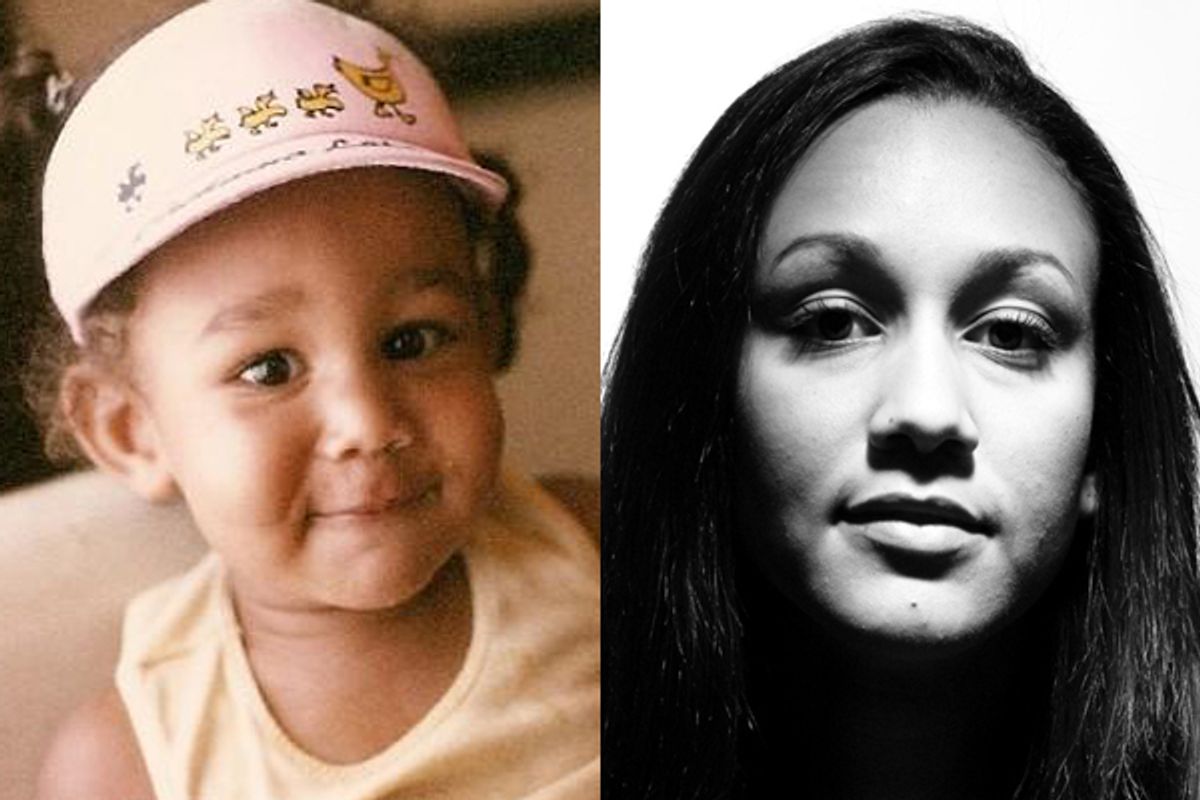 The first time I saw my father, I searched his face for traces of me, for something that connected us in an indisputable way. I hoped he'd have the same smile or the same long forehead. But I was disappointed to find he was still as much a stranger as he'd been all my life. I had expected him to be tall and lanky like me, but he was heavier set. His face was round and dark, his eyes deep-set and tired. There was one genetic gift I spied: Thick eyebrows, dark caterpillars crawling across his forehead. Of course, I'd hated those eyebrows all my life.

I had so many other questions to ask: What did he do for a living? Did he have other children? Was he married? Did he drink coffee? Was he happy? Were there pictures of me -- a smiling, chubby baby -- on the walls of his home or was it easier for him to forget I ever existed?

But I could not ask him any of this, because we had not actually met in person. At the age of 27, I saw my father for the first time when I found him on Facebook.

Up until a few months ago, I didn’t even know what he looked like. Years earlier, I had scavenged my mom’s old photo albums for evidence but didn't find much -- just his name, pictures of his parents and another child from a previous relationship. (Apparently, he had chosen to remain in my older half-brother’s life.) I also found our one remaining picture together. I'm an infant, my mouth wide open in anticipation of the spoonful of food his hand is preparing to deliver. It’s just his hand, though, nothing else. For nearly three decades, that dark, strong hand was the only image I had.

There wasn’t much else to be found. My mom met him in college and they’d married young. Since I was never told much about him, I made up my own romantically tragic stories: They married early because I was on the way; their interracial relationship threw my mom's Archie Bunker-like dad into a tailspin, one that ended their relationship when I was just a year old. The only thing I ever knew for sure, though, was something my maternal grandmother told me when I was 10 years old. “He walked away from both of you,” she said. “When he and your mom got divorced, he told her he never wanted anything to do with her or you ever again.”

Then, earlier this year, I got a Facebook friend request from a young man with the same last name as me. Without thinking much about it, I paged through his profile trying to place how I knew him. Just before I clicked “Not Now” on his request, I was struck by who he might be. I froze in place: He had my father’s last name. This was a brother, a cousin, someone from my dad’s side of the family. I confirmed our friendship, and then I devoured every inch of his profile. I searched for faces that looked like mine, searched for hands that looked like my father’s. But this young man kept his profile sparse. So I typed my father’s name in the search bar. He came up immediately. Everybody’s parents are on Facebook these days.

I wondered if he could see me, if he had seen me already. Perhaps the cousin had told him about me. I wondered what I would look like to him. Did I resemble his son? Would he see familiar parts of himself, maybe something I had missed? As I looked closer, I could see that we did have the same eyes and the same full, dark lips. I wanted him to think I was beautiful. But I hoped that wouldn't be the only reason he might want to be in my life. I wanted him to think I had turned out well. I had often wondered if he regretted leaving behind the baby that turned into this young woman.

I had the urge to change all my privacy settings, enabling anyone online to view my photos. I wanted to show him every part of me that he had missed. I wanted him to notice that I’d been promoted recently, that I had gone to a good school, that I had jumped out of a plane in New Zealand recently. I knew he’d see that I was engaged, and I hoped he’d be curious about the young man who would be marrying his daughter, taking the protective role he had long ago relinquished. I wanted him to see that, unlike and in spite of him, I had maintained healthy relationships with the important people in my life, that I was happy and adventurous. I hoped he’d feel pangs of regret for not having been there, for having nothing to do with the way I turned out. I had made it nearly 27 years believing I didn’t care whether or not I knew my father, and now, here we both were, on Facebook together, and all I could think about was how I might get him to like me.

I went back and forth in the days that followed. Some days I would make my profile public, allowing everyone to read my wittiest thoughts, peruse my best pictures, see all of my friends. On other days, I felt he didn’t deserve this. For years he had made no effort to find me. (It would not have been hard. I lived in the house where my mother grew up, and I had his last name.) Why should I make it so easy for him now?

And then, there is the worry that his friend request might never come -- that he simply does not want to know me. If the past is any indication, I certainly can’t count on him to reach out. I’m not sure I want him to reach out this way anyway. Facebook -- this artificial, flat universe of human relationships -- is not the place where I want to start anew.

The complicated tangle of feelings I harbor for my dad moves far beyond what can be contained in a casually cheery Facebook message or a 160-character wall post. I am still angry, curious, hurt, anxious – and I’m sure I can’t properly convey all of that, period, ever, far less in a two-dimensional social media network where everyone is watching. But a Facebook friendship is the lowest-stakes form of friendship, easy as a click of a mouse. And it stings that he can't even manage that. He has been given yet another opportunity to be a part of my life -- I am right there in front of him -- and he’s rejected me all over again.

I have always been close with my mother. I often tell people that I was blessed with one parent who was as wonderful as two. She is a beautiful, brown-haired, olive-skinned beauty, and grocery store clerks often flirtatiously ask if she is my sister. She laughs it off, but I love the insinuation that I am anything like her, whether in appearance or character. She has taken her responsibility as my protector and guide in life with total seriousness. A testament to her grace, she has never spoken badly of my father. She never speaks of him at all. I have always wondered what she was trying to protect me from.

My fiancé is also a pillar in my life. Kind and honest, he is quick to remind me of my permanence in his life and, even more important, his faithful permanence in mine. When I share these thoughts about my father with him, he is perplexed. “Why do you even want him in your life?” I understand why he asks. For so long, I hid behind the idea that I was fine without him. Maybe it's because my mother was so strong and independent without him. Maybe mine was a defensive posture -- he abandoned me, so I abandoned him. But I am embarrassed to discover that, however illogical, I do care what he thinks of me. I don't know that I want him in my life. But I want him to want to be in my life.

In the movie version of my world, he would send me a message and he would simply say he was sorry. It wouldn’t be enough, but it would be a start. I would respond, coolly but kindly. He would realize that I am no longer a child, that he must now form a relationship with an adult whose heart he has broken. But he won’t run. He will be too curious, he will persevere out of the voltage of his affection. He will ask questions about my job, my travel, my fiancé. He will even ask about my mom, because it will be so clear to him that she is everything to me. It will be awkward and it will be slow, but that is how some relationships unfold -- slowly and carefully, beginning with a Facebook message.

In some dark moments, I believe that if he reaches out, it couldn’t have been my fault that he left 27 years ago. Even in my most rational, lucid moments – in those moments when I know an infant is never the only reason a marriage ends – I wish he could give me some kind of confirmation that it was all a big mistake, one that he’d take back if he could. I wish he would jump at the chance to know me, even if only through a computer screen. I still long for his approval.

But I suspect this confirmation will never come. He has not looked for me for nearly 30 years. Why would he start looking now?

For most of my life, I didn’t much worry about this. It was easy to pretend that if only he could see me, it would be impossible not to love me. He would see that I had worked hard for straight A’s and straight teeth. But Facebook has ruined that illusion. He can see all of these things. I have posted them for him and the world to see. He can see my best self, displayed in its pixelated glory, and he still won’t claim me. I worked so hard to do it all right, and somehow I’m still all wrong for him.

I won’t add him on Facebook, and I doubt he’ll add me. That wouldn’t make it all better anyway. But I’ll continue to do the hard work of all abandoned daughters. I will forgive because I cannot fill the hole he left with the anger and self-pity that will only prove to destroy me more. These are the dangerous emotions that will ruin the relationships in my life that I still value – my closeness with my mom, the trust I have in my fiancé – and I refuse to dwell on them. I will grow and move on; and I will continue to prove that, in spite of his absence, I have turned out all right.

Jenna Britton is a writer living in Los Angeles.