Good politics, meaningless policy: The president's call for a millionaire's tax has no chance of passing 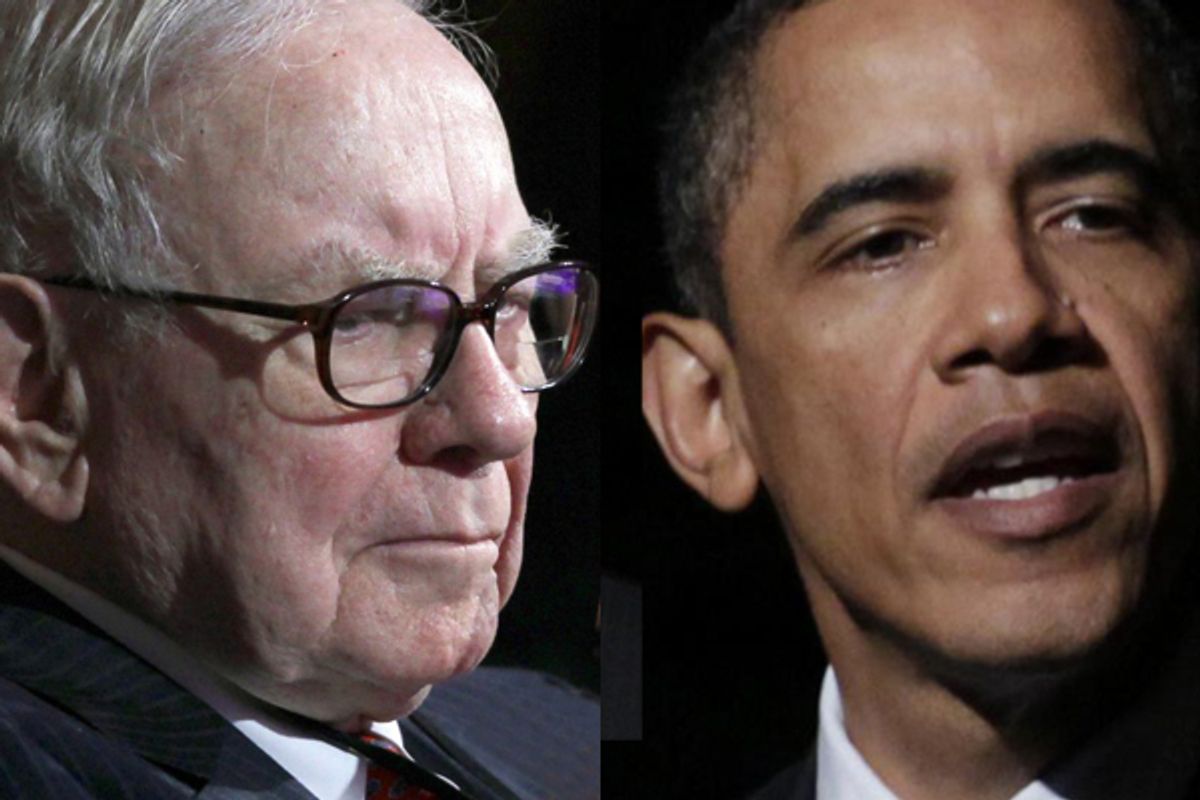 With the pain of tax day less than a week away, President Obama is in the crucial swing state of Florida making the savvy case that millionaires should pay higher  taxes. You have to give his reelection campaign team credit: Obama's high-profile  push to convince Congress to pass the so-called Buffett rule -- requiring any American earning over a million dollars to pay at least 30 percent of his or her income in taxes -- is receiving blanket media coverage.

And why not? The proposal makes for great politics. Polls routinely show that Americans support higher taxes on the rich. There is no shortage of data showing that over the past few decades the rich have gained a larger and large share of all new wealth created, while paying a lower and lower percentage of their income in taxes. Even better, the proposal draws the sharpest possible contrast with Obama's presumed opponent -- Mitt Romney, who not only is rich as Midas, and paid only 14 percent of his income as taxes in his most recently released returns, but who also believes that the rich should pay even less than they do now.

However, that's really all the Buffett rule is: pure politics. It has no chance of beating a Republican filibuster when it comes up for a vote next week in the Senate, and even if Obama is reelected in November, the chances that a new Congress would be any more amenable to a tax hike for the rich then than they are now are minimal.

There's also good reason to question whether Obama has any real intention of following through on this promise. His record doesn't offer grounds for optimism.

Let's take a trip back, to April 2008. Almost exactly four years ago, in an interview with Chris Wallace on Fox News on Sunday, Obama vowed to let the Bush tax cuts for the wealthy expire in 2010.

"It is true that I would roll back the Bush tax cuts on the wealthiest Americans back to the level they were under Bill Clinton, when I don't remember rich people feeling oppressed."

The promise to roll back the Bush tax cuts on Americans making more than $250,000 a year was a staple of his stump speech in 2008, and was almost always greeted with rapturous applause. But when push came to shove, Obama didn't deliver. He cut a deal with the Republican opposition in late 2010, shortly after the midterm election debacle, extending the tax cuts another two years.

Obama had a halfway decent excuse. The economy sucked in 2010, and raising taxes during a recession is the definition of anti-stimulative economic policy. But many Obama supporters were deeply disappointed with how the White House failed to use its leverage to cut a better deal with Republicans. Here's the crucial point: To keep extending the Bush tax cuts, Congress has to take positive action -- i.e., they have to vote to pass a new bill. And Obama, as president, has the power to veto that bill. Let's repeat that: Obama has the power to roll back the Bush tax cuts, by vetoing any extension passed by Congress. If Obama had chosen to effectively wield his veto threat, chances are he could have resisted Republican efforts to cut government spending -- another example of unnecessary anti-stimulative economic policy -- during the recession.

The Buffett rule is a different animal. Obama has no power to get it passed. It's a rhetorical measure, designed to rev up his base and capitalize on populist resentment. That's all well and good in an election year, but if Obama really wants to make a promise that means something, he should be shouting from the top of every hill and mountain how this time he really is going to let the tax cuts expire.

“You may not believe it Joe, but the president’s going to win in November and we are not going to extend those tax cuts for the wealthy and I’m looking forward to coming back here in the future and taking a big ‘I told you so.’”

It will be very interesting to see whether Obama repeats Axelrod's promise during his speech on the economy at Florida Atlantic University Tuesday afternoon. Because vowing to let the Bush tax cuts on the wealthy expire means something. Pushing for the "Buffett rule" does not.