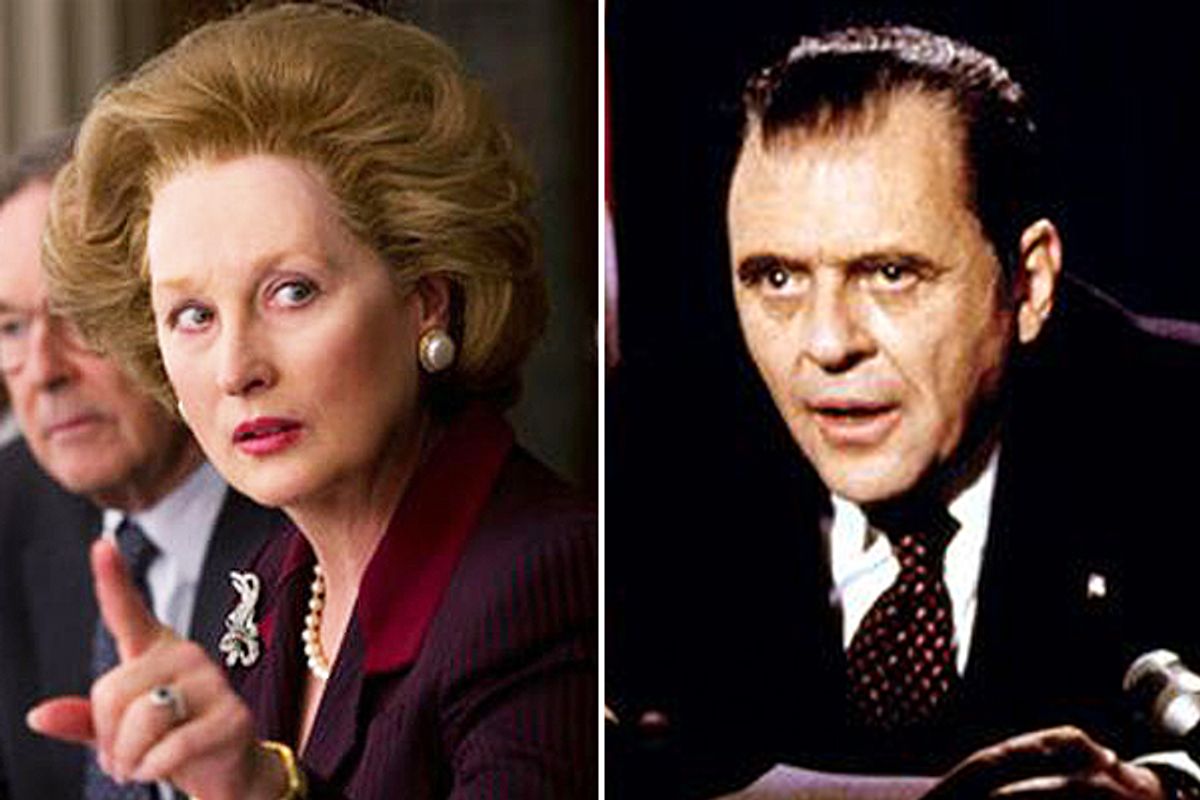 Meryl Streep in "The Iron Lady" and Anthony Hopkins in "Nixon"
--

That’s a simple question that any work of art must ask and answer. But for the political biopic, this question is fraught with complications. Is the point to: a) Re-create accurately the life and likeness of a famous person? b) Take what is larger than that life and likeness and bring it down to an accessible level? Or c) Just reinforce an audience’s existing preconceptions? And what happens when you get d) None of the above? Well, you get "The Iron Lady."

It would be heretical to argue that Meryl Streep’s third Oscar for best actress wasn’t deserved. Streep is a flawless actress and technician, and her supernatural gifts for getting inside the skin of her characters are well displayed here. But, you know what? Who cares? In "The Iron Lady," Streep is all dressed up, with no place to go. And it’s not her fault.

In its attempts to be a biopic lite, "The Iron Lady" manages to tell the story of the life of Margaret Thatcher without any of those pesky historical consequences – coldly regarding the passions that tore Britain apart through the window of her enclosed limousine. This is not just a failure of execution, it’s a failure of nerve. By framing the story through the eyes of the geriatric, befuddled old Thatcher, the film is profoundly disrespectful – not just of its subject, but of the history that empowered her. Of course Streep commits to her performance, but this commitment is not matched by the filmmakers, who refuse to get their hands dirty. Scene after scene is lined out in that Esperanto of Expositional Narrative 101. Oh, look, boom, here comes the IRA. Wait, there’s Ronald Reagan dancing with Meryl through the miracle of animated Photoshop, whoops, there’s goes another rubber tree AND the Berlin Wall. Even the wonderful Jim Broadbent, as Margaret’s (and the screenwriter’s) fantasy construct of Dennis Thatcher manages to wear out his welcome, something that before "The Iron Lady," I felt was impossible to achieve.

There are a few Reality Breaks, but too few. These include a few seconds of Punk Rock over stock footage of Britons Behaving Badly, and glimpses of contemporary news broadcasts. But then, we are whisked back into the bloodless drawing rooms of mannered artistic re-creation, and the movie collapses back into itself. At only 90 minutes, it still seems too long, and soon, Streep’s performance begins to resemble the audition reel that must have captivated the producers and director. I imagine they were proud that they left any trace of a political agenda behind them – but the end result is a whole lot of nothing, as if “Ray” had told the story of Ray Charles without his music, let alone his soul.

Speaking of soul, according to Neil Young, “even Richard Nixon has got it.” And our second feature shows us just what the Cranky Canuck meant. Just as it took a Nixon to go to China, it took a lovable leftie loon like Oliver Stone to find that missing soul, and create a biopic masterpiece in the process.

Now, nobody can ever accuse Oliver Stone of either subtlety in ignoring the political elephant in the room, or in paying slavish attention to historical detail. He and his films are nasty, brutish and long, and "Nixon" is his defining moment. Henry Miller once wrote that “every day we slaughter our finest impulses,” and "Nixon" stands as a haunting chronicle of that carnage.

The lend lease program between British and American great actors carries on here. But Anthony Hopkins does not even try to impersonate Richard Nixon. Instead, Stone’s script allows him to do something far more profound. Hopkins assimilates Nixon – and what is more, he assimilates the historical times that contained and were amplified by our most contorted recently disgraced ex-president.

"Nixon" was made during Stone’s glory days in the late '90s, when he had the box office power to do whatever he wanted. Often filmmakers with a blank check go that bridge too far and disgrace themselves and their audience, but in the case of "Nixon," Stone was holding a full house. Effortlessly topping his counter narrative of assassination and conspiracy in the inferior “JFK,” Stone creates an atmosphere of gothic dread in every assured frame. Nixon sweats, steaks bleed and in one amazing scene, the eyes of Richard Helms stare at us in utter blackness – as Helms recites a Yeats doomsday poem and we slouch with him toward Bethlehem.

But, here’s the thing. Unlike, say, "The Iron Lady," "Nixon" is actually fun to watch. Almost twice the length on its superior Director’s Cut DVD as "The Iron Lady," the time just seems to fly by. Let me count just some of the reasons why. Joan Allen is brilliantly brittle as Pat Nixon, and I’ll trade the entire overwrought latex-faced performance of Leonardo DiCaprio in “Edgar” for Bob Hoskins' single lustful “once-over” of the buff Marine Guard at Tricia’s wedding. Paul Sorvino gets the coveted “best performance by a moving jowl” for his impersonation of John Belushi channeling Henry Kissinger, and James Woods and J.T Walsh hit epic buddy team rhythms as the Laurel and Hardy of unindicted co-conspirators, that other Berlin Wall, Haldeman and Ehrlichman. And let’s not forget the “J.R Ewing on Acid” cameo of Larry Hagman, as the predatory oilman with the box seat overlooking Dealey Plaza.

And where "The Iron Lady" goes wrong, "Nixon" somehow goes right. Both the Streep and Hopkins film are framed in flashback of cornered protagonists, but Hopkins and Stone turn the amp up to “11,” as the gibbering Nixon sees his life unspool as messily as the tapes he can barely manage to play.

And by refusing to even try to impersonate Richard Nixon, Hopkins somehow creates him, and you are forced to watch him, not just his makeup. The performance comes from the inside-out, not outside-in, and that makes all the difference. Hopkins is part of a distinguished lineage of movie Nixons. Frank Langella followed in Hopkins' “inside-out” footsteps in "Frost/Nixon," Dan Hedeya and memorably Rip Torn donned the wingtips in "Dick" and "Blind Ambition," respectively, and Philip Baker Hall fully inhabited the role in Robert Altman's "Secret Honor." This last film comes closest to the modified limited hangout route of "Nixon" in its portrayal of Richard Nixon as a spider in a web not of his own making, but Stone raises the ante far beyond the minimalistic Altman film.

So, what’s the point, you say?

Stone creates a film that is as passionate, contradictory, inflammatory and deranged as the man himself. It reinvents history, and by doing so, changes how we see that history. “When the legend becomes fact, print the legend,” John Ford once reminded us – and the legend of Nixon and his lunatic times are printed here in occasionally smudged blood red ink. You’ll never see Richard Nixon, or his times, the same way again once you watch them through Stone’s audacious and hallucinatory filter. Love him, hate him, analyze him, Nixon is the abyss we look into, and we pray he doesn’t look back. Richard Nixon did have soul – and unlike "The Iron Lady," this film doesn’t allow us the luxury of denial. Oliver Stone gives us no choice but to watch him slaughter his, and our, finer impulses.

"Nixon" is one of the handful of movies far better in the Extended Director DVD Cut than in their original theatrical incarnation. Any others come to mind? I’ll go first. Since I can’t seem to get through a Salon piece without referencing another Cranky Canuck, Jim Cameron, I maintain his Director’s Cut of "Avatar," let alone "The Abyss," knocks the socks of the theatrical version, even without the 3-D. Got any others? And what makes them better? See you (and yours) in the comments!