The drones are coming -- to America

Congress has opened up U.S. airspace to the drone industry -- and your privacy is about to be at risk 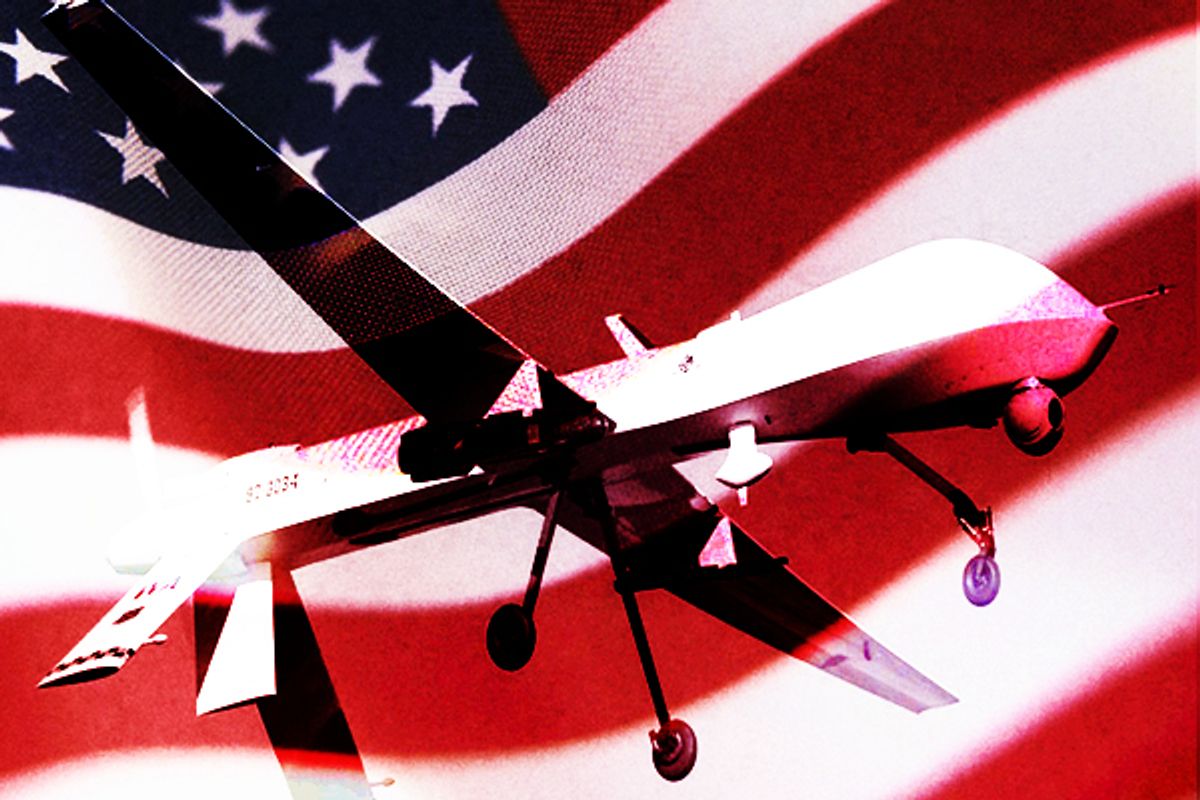 A drone is probably heading toward your personal airspace soon. With Congress requiring the Federal Aviation Administration to simplify and expedite drone applications from U.S. police departments by May 15, industry and watchdog groups agree: It won't be long before cops and first responders put them into action.

Thanks to a law passed without much public debate in March, the FAA must allow law enforcement agencies to operate small drones (i.e., less than 4.4 pounds) at altitudes of less than 400 feet. "The demand is huge," says Catherine Crump, an attorney for the American Civil Liberties Union. Michael Toscano, president of the Association for Unmanned Vehicle Systems International, a trade group, says there are nearly 19,000 law enforcement entities in the United States, of which only 300 now have aerial surveillance capacities.

"Those departments have helicopters which cost about $1,500 an hour to operate," Toscano says. "You can fly these drones for maybe less than $50 hour. A lot of smaller departments can now afford this technology."

It is easy to imagine the benefits of having an eye in the sky. "You don't have to call off a search for a missing person because of darkness or inclement weather," Toscano says. Using airborne sensors, a drone could pinpoint the most dangerous areas of a fire for firefighters on the ground.

The downside is obvious too. Drones are mostly known for their use in war zones in Iraq and Afghanistan and in the controversial targeted killing of overseas U.S. citizens allegedly involved in terrorism. The introduction of surveillance drones into U.S. airspace signals an unprecedented conflation of homeland security, counterterrorism and domestic law enforcement, a combination that is galvanizing civil society activists.

Technology developed for attacking armed enemies abroad is being repurposed for enforcing the law at home -- without any new safeguards for privacy and civil liberties. Domestic drones can engage in constant surveillance from the sky, which the Supreme Court has ruled does not constitute a violation of the Fourth Amendment strictures against unreasonable search. Photographs of political demonstrators could be fed into facial recognition software on a scale previously unimaginable. Drones can also be weaponized with tear gas or tasers for remote crowd control. Michael Buscher, president of Vanguard Defense Industries, a drone manufacturer in Texas, told the Daily that police drones could have "rubber buckshot better available for large crowd dispersal."

"With these aircraft hovering above our heads, privacy is at risk as drone technology has far outpaced the development of corresponding regulatory laws," says Eugene Chow, editor of the Homeland Security News wire.

The ACLU's Crump adds: "There's no federal law that controls the use of data [collected via drones]."

"The controlling law [for data] would probably be the state equivalents of the Privacy Act," says Harley Geiger of the Center for Democracy and Technology (CDT) in Washington. "These are very skimpy protections. Part of the reason is the courts have said we have no expectation of privacy if we are standing in a public place or in a place that is observable from a public place. For a drone hovering at 400 or 500 feet, the airspace is considered public space. So if there is a camera up there that can observe you, you have no reasonable expectation of privacy. It’s a completely outdated understanding of privacy."

Toscano says the drone industry thinks existing laws are sufficient: "We believe that your Fourth  Amendment rights are protected. There are laws in place for what you can and cannot do with a drone."

"The acquisition of more systems"

The opening of domestic airspace to drones has been driven by industry and the Pentagon without much attention to privacy and civil liberties issues. The drones, first developed in the 1990s, became popular with U.S. military commanders in Iraq and Afghanistan as a way of targeting enemies without risking U.S. soldiers. As those wars wind down, the Pentagon is looking to expand their use outside of war theaters.

"The stuff from Afghanistan is going to come back," Steve Pennington, the Air Force's director of ranges, bases and airspace, said at a drone conference in February, according to the Los Angeles Times.  The Department of Defense "doesn't want a segregated environment" for operating drones. "We want a fully integrated environment."

The integration of drones into U.S. airspace has already begun with the U.S. Customs and Border Protection agency of the Department of Homeland Security, now operating nine drones from sites along the country's northern and southern borders, according to director Michael Kostelnik, a retired Air Force general. The CPB shares information with Immigration Customs Enforcement and other law enforcement agencies, he said in an interview.

With the emergence of the Unmanned Systems Caucus on Capitol Hill, domestic drones are now backed by the proverbial "iron triangle" of Washington policymaking: congressional committees, executive branch agencies and the private sector. The drone caucus, a group of 53 representatives, 16 of whom come from districts in Southern California and Texas where drone contractors are concentrated, led the push to force the FAA to open the airspace to law enforcement immediately and to the commercial drones by 2015. The caucus defines its mission as educating Congress and the public "on the strategic, tactical, and scientific value of unmanned systems" and to "actively" supporting "further development and acquisition of more systems."

The caucus enjoys the backing of the defense industry. The co-chairs of the caucus, Reps. Buck McKeon, R-Calif., and Henry Cuellar, D-Texas, received $64,000 and $7,400, respectively, from General Atomics, the firm that developed the first military drones, according to the Center for Responsive Politics. So far during the 2012 campaign cycle the General Atomics PAC has contributed $68,500 to 15 drone caucus members, reports the Texas Independent.

The caucus, in turn, works closely with the drone industry, says Toscano of the Association for Unmanned Vehicle Systems International. "The only changes made to the [unmanned aviation systems] section of the House FAA bill were made at the request of AUVSI," according to a PowerPoint presentation made by Toscano and obtained by Republic Report. "Our suggestions were often taken word-for-word," Toscano boasted at the time, a claim he repeated in a phone interview.

And the industry is counting on government agencies to fund the growth of the drone market. For example, Vanguard Defense Industries in Texas advises police departments to obtain Homeland Security funding for the purchase of drones. Vanguard says it helped law enforcement officials in Montgomery County, north of Dallas, obtain money for a drone under the Homeland Security Grant Program, which funds strategies to "address the identified planning, organization, equipment, training, and exercise needed to prevent, protect against, mitigate, respond to, and recover from acts of terrorism and other catastrophic events."

The open-ended justification of domestic surveillance as "homeland security" is triggering alarm among activists. Knowdrones.com seeks an international ban on weaponized drones and surveillance drones. Code Pink and the Center for Constitutional Rights are sponsoring a Drone Summit in Washington later this month.

"What we have to worry about is closed circuit television or a Trafficam on steroids in which law enforcement can watch everything that is going on in minute detail," says Geiger. "In the name of public safety, there are lots of people who would be more than happy to put a system like that in the air now."

The emerging drone market points up the need for a comprehensive privacy law like those of other industrial countries, Geiger says. "If we cannot get baseline privacy legislation, we will need legislation specific to the FAA." As first steps, he says CDT favors banning weaponization of domestic drones and requiring the FAA to conduct a Privacy Impact Statement. So far Congress has shown no interest in such measures and indeed has barred the FAA from considering any factors other than safety in opening up domestic airspace to drones.

The law is playing catch-up to a revolutionary technology.

"How long will it be before there are enough drones in the sky that the general population starts to notice?" asks Geiger. "There will be thousands of them of them in five years."